Last week, my dental hygienist kept me in her chair for over 30 minutes, demanding I explain to her why she should go on a Disney cruise without children. She couldn’t understand why someone my age (ahem, 40 something) would want to spend that kind of money on a vacation that would have foam rubber characters jumping out at you, around every corner. 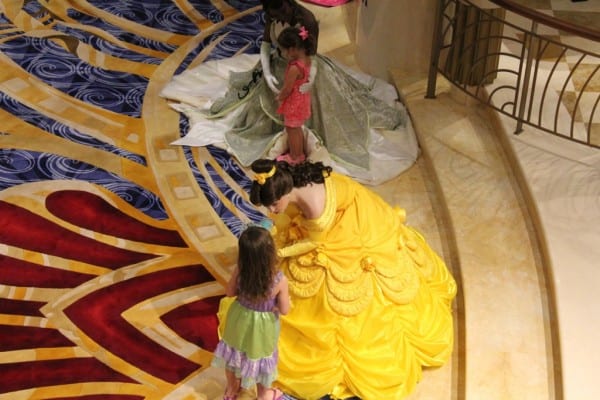 I have a confession. I’m not a fan of kids. I know, right? Disneyphile and doesn’t like kids? Don’t get me wrong, they’re great people. But when you get a brood of them all together they become loud, drippy and unruly. But yet I love Disney. Sometimes Life tosses you curve balls.

I’m going to outline my favorite adult activities you can do on a Disney ship and show you that they’re not always all about the kids.

If you want to avoid over-stimulation during your main course (like dining in the hyper-kinetic Animator’s Palate) I would suggest paying the little extra (usually $20 per person more) to dine in the cruiseline’s more sophisticated restaurants. Each DCL ship has a restaurant called Palo, which is “adult exclusive” which boasts “northern Italian” cuisine. Having dined there a few times, I can honestly say each time has been extraordinary. The service was incredible and the food was some of the best meals I’ve ever had. The waiters slow the pace down and spend time discussing the menu options and wine pairings, making the evening much more enjoyable than your average restaurant experience. On the Dream and the Fantasy, they have a second “adult exclusive” restaurant called Remy, serving “French inspired” food.

Tip: When you check in to your ship, you will inevitably double up on one or two of the “regular” restaurants (depending on the length of your cruise) so consider booking into the finer dining restaurants on one of these nights. Book as soon as you can. These finer restaurants have a tendency to book up quickly. Also, on both the Magic and Fantasy, these restaurants are on deck 12, Aft, offering beautiful views of sunsets, but you should book for an early seating, otherwise the view is inky blackness! 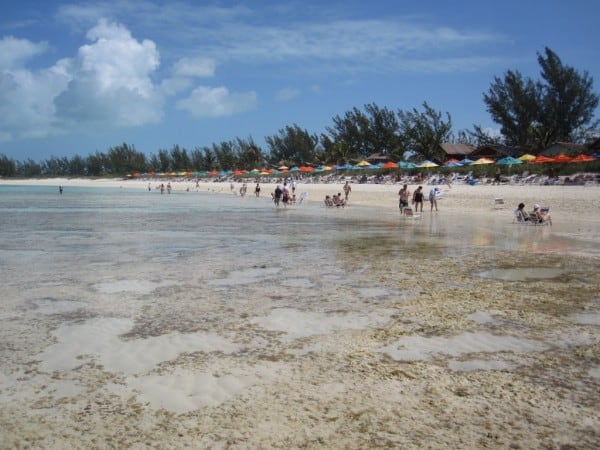 If you are on any Disney ship that is sailing in the Caribbean, you will definitely stop at Castaway Cay – Disney’s private island. Originally a drug smuggling stop, Disney filmed “Splash” there and decided to turn the island into their personal playground when the cruise line was opened.

When you get off the ship, jump on the tram and head straight to Serenity Bay, the “Adult Only” beach where kids under 18 are not permitted. Getting there early gets you the best seats as well as a near-empty tranquil beach before it picks up (usually 2 hours after arriving). There are  Cabanas available for rent with a no charge, alcohol-free minibar. As well, spa massages can be booked while overlooking the beach. Needless to say, there is an extra charge for this but it does make for a beautiful day!

When Serenity Bay fills up and lunch has been served, usually around half way through your stay at Castaway, you can then head on over to the bike rentals or snorkeling area to try to find the sunken Mickey or swim amongst the colourful fish.

There are a ton of other activities to do on the island and at other ports of call, too. The general rule of thumb to make it kid-free is “the more active the excursion, the less strollers there will be”.

Tip: I always choose excursions offered by Disney. Disney excursions are much more expensive than an “unlicensed” company that offer the same excursion at the foot of the dock. The difference is that Disney will wait for their own excursions to come back to the ship if for some reason you’re delayed. If you’re with a non-Disney excursion and you don’t make it back to the ship on time, your 130,000 ton hotel floats away and you either have to fly to the next destination of make your own arrangements for getting home. 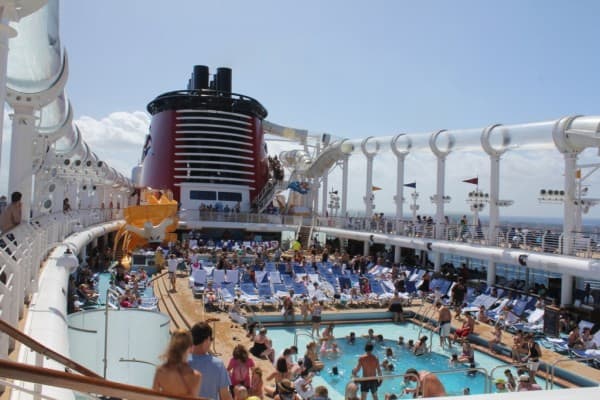 Dead centre is the most noisiest, kinetic, hyper area on board: the main pool. It fills up just after 10am and stays crazy until dinner. Thankfully the ships are extremely well thought out for deck space layout.You can always get a seat with some kind of view, either looking over the pools or over the side of the ship, but for a quieter time, head forward of the stacks – there you will find the Adult Only areas of the ships, usually occupying the top two decks. These areas are “guarded” by staff to ensure that they’re not as crazy as the other pools. I’ve seen crew members usher whole families out of these areas just because they had one member under 18 in their party. While the pool is smaller and barely able to do any kind of swimming other than “float”, there is a bar within seconds from any chair you choose. 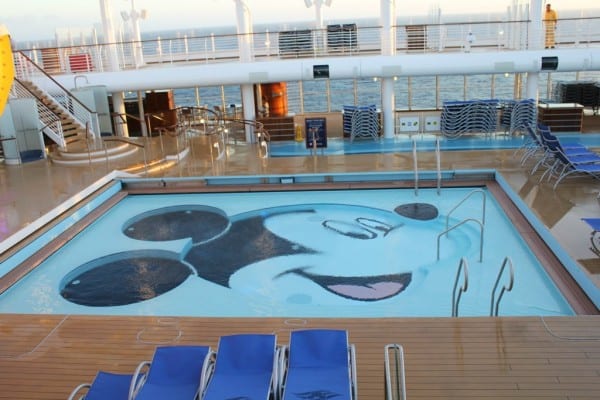 Tip: If you’re just looking for a romantic quiet bar, I recommend the Meridian on the Dream and Fantasy. During dinner hour, the place is near-empty and you can have the outside deck to yourselves. Talk to your bartender about the amazing array of martinis and then head on out to the deck to watch the waves. Most of the nightclubs on Disney ships go “adult only” after a certain hour so you’re safe from twerking teens. 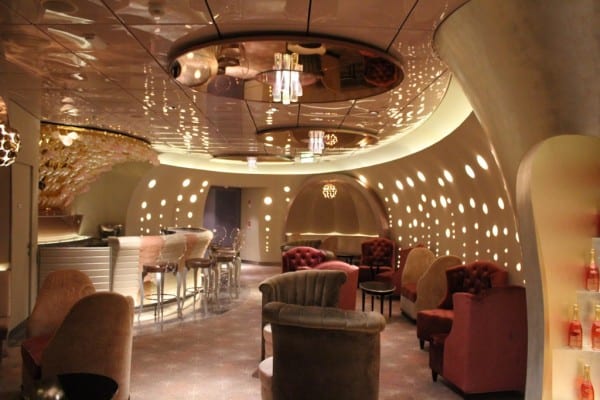