Our third Disney trip of 2012 and we make it to Disneyland for Christmas! Three days of holiday magic as we visit Carsland for the first time and experience everything Disneyland Resort had to offer for the Christmas season! Let’s get started with our first day shall we?

We arrived in Disneyland in the evening and just in time to secure a , not so awesome, spot for the Christmas Fantasy Parade. The park was wall to wall people which made it a bit difficult to get a spot for the parade. We managed to get all the way to Fantasyland right beside its a small world. Regardless of our spot the beginning of our Disneyland Trip was off to a great start! Parades are a “must-do” whenever we visit. We were right beside a designated walking path, even though we were far back, so being able to see the parade without someone who is 7′ tall standing in front of you made up for the sub-par spot. 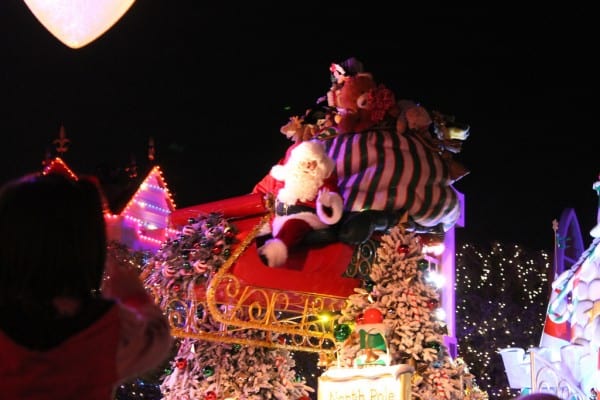 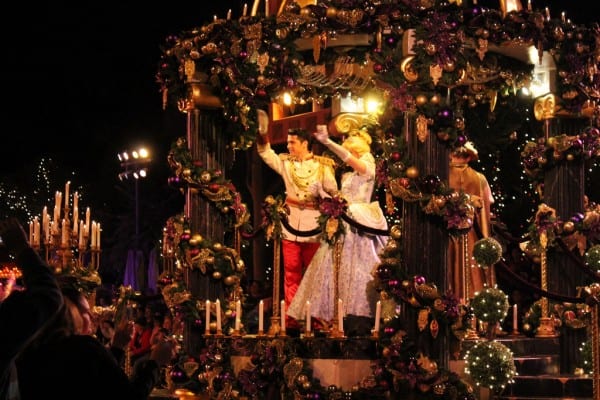 Once the parade finished we were now pumped to be in Disneyland. We made our way as quickly as possible to the Haunted Mansion. During Halloween and the holiday season Disneyland (along with Tokyo Disneyland) Jack Skellington takes over the Haunted Mansion and spreads his version of holiday magic throughout. Hands down this is my absolute favourite attraction. Sadly when we got there, it was down for some unknown reason (I blame Lock, Shock and Barrel). We over heard a Cast Member tell another guest that “Jack is putting a few last minute touches on the Mansion for the evening. He wants it to be perfect for you!”. 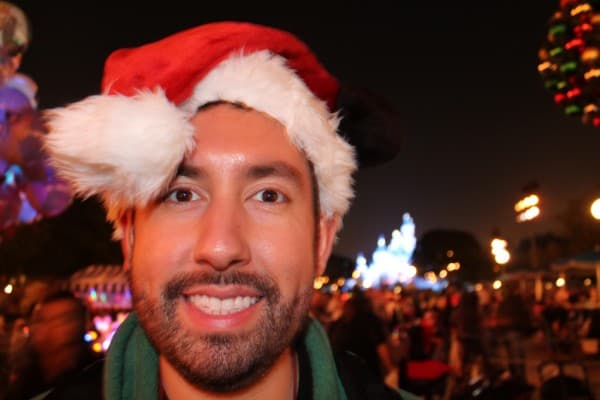 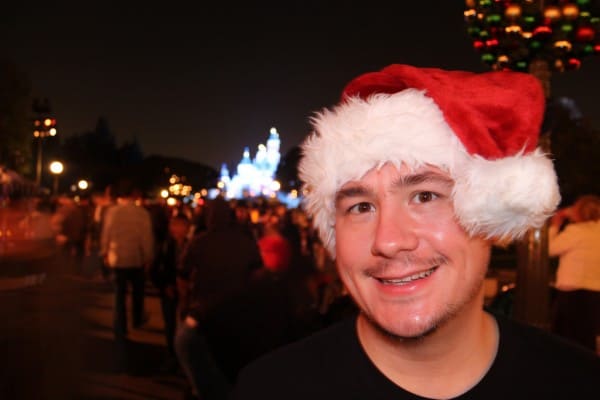 The evening was still young and noticed that Splash Mountain only had a 5 minute wait. Being from Canada, it really was not that cold, so it was decided to head on Splash Mountain. To ensure we got to the park in time for the Christmas Fantasy parade dinner was skipped. For dinner we headed on over to the Hungry Bear and got a plate of delicious burgers and fries. Once all the food was devoured we made our way over to Star Traders. 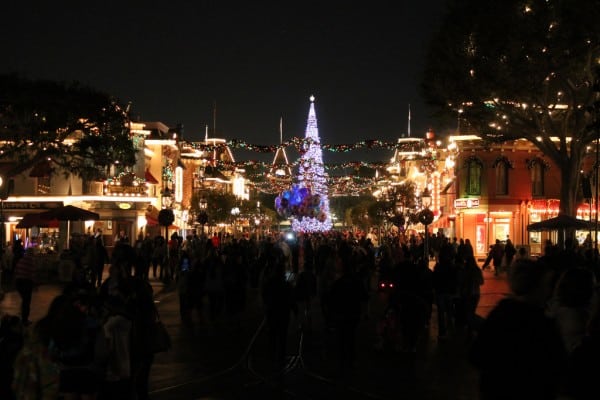 Wreck-It Ralph had just been released into theatres, naturally there was no shortage of finding merchandise. The highlight was playing the actual Wreck-It Ralph and Fix It Felix Jr. arcade game! Yes, there’s an actual arcade game you can play. The lines for the game threw me back to the days where you had to line up to play arcade games and actually had to talk to people in real life instead of online! Something that is this generation of gamers aren’t going to get to experience. The game itself is rather challenging in itself. I lasted about 4-5 rounds before running out of lives. Right after playing the arcade game I had to go buy the game for my iPhone (best $0.99 spent ever). 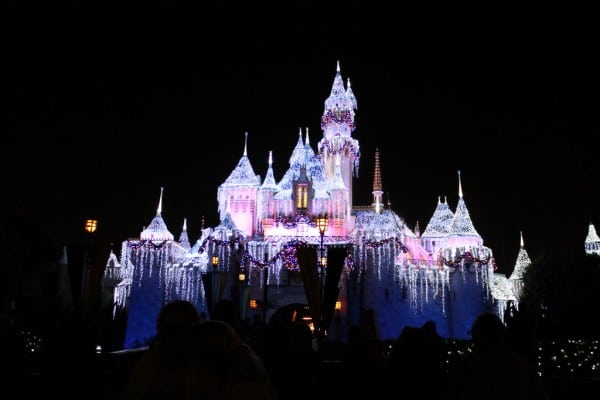 The park was rather crowded therefore riding many attractions just was not in the cards. Visiting the Emporium is always dangerous and my credit really dislikes it there, but there’s just so many awesome things to buy! Once our credit cards were done getting their exercise for the evening it was time to grab a spot for Believe in Holiday Magic. Our spot was absolutely perfect, right at the end of Main Street and right up against the rope. Therefore we would not have anyone who Ralph sized standing in front of us. There was close to 45 minutes before the show and we began talking with this lovely family from Hawaii who were on their first family vacation to Disneyland! They were telling us how cold it was and when they found out we were from Central Canada they just laughed and said “Well, this must be tropical for you guys!”. Those 45 minutes went by rather quickly as we exchanged Disney stories, then it was time for Believe in Holiday Magic!

This was our first time seeing Believe in Holiday Magic and it was absolutely beautiful! Parades and fireworks are my favourite things at any Disney Park. Before calling it a night, John wanted to ride its a small world holiday. Neither of us have seen this version either, so why not? Don’t worry we captured every painful magical moment for you to all enjoy and relive the magic with us! 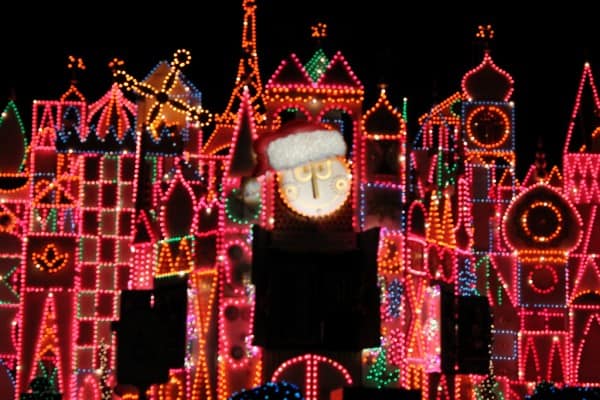 its a small world holiday

By the time we disembarked the attraction the park was rather quiet but our energy was best saved for our early wake up call the next morning for Cars Land! This will be our first time experiencing the new land in Disney California Adventure and wanted to be good and rested for the exciting day a head! 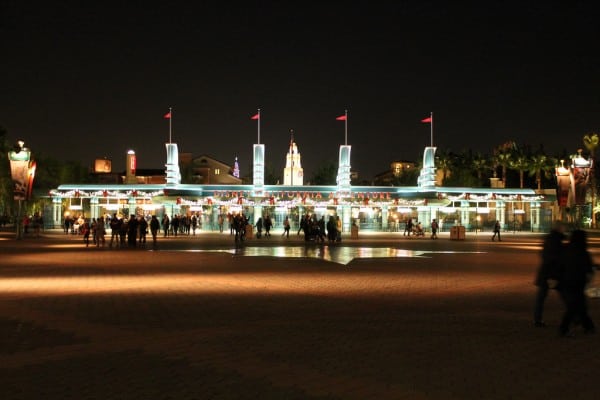 That’s it for the first day at Disneyland. Make sure to come back to read our next day trip report as we head over to Disney California Adventure to experience Carsland and how it feels to be denied alcohol as a 27 year old. It’ll be entertaining, I can ensure you that!