This is our second half of the Backstage Magic Tour Trip Report! To those just joining you can read the first edition of the trip report! Also just as a warning I will be describing what we’ve seen on the tour which could reveal some of the magic. If you wish to not read this, that is understandable! You can read the other Trip Reports that pertain to our New Years Celebration 2012 Trip! Lets pick up where we left off!

Ever wonder where all the plants within the parks are grown? They do it right on property for a vast majority of the plants you see in the parks. One woman is in charge of it all and she does an amazing job! They were already in the process of growing the plants for the yearly Flower & Garden Festival in EPCOT.

They also grow all the topiaries you see in the parks, especially in EPCOT. They are built with wireframes and have their own watering system built right in so they stay nice and green while they are on display. We got to see where they were all kept when they are either being created or kept for the next event.

This was one of the rare places we were able to take photos since there were no strollers to be seen. There were many unfinished and in progress topiaries in the building. I managed to take a lot of photos of them.

The topiaries they wish to keep for another event is hooked up to the water system so the plants and moss can stay alive. Usually the topiaries they use in the previous Flower & Garden Festival are kept to be used the following year.

Those topiaries that are not going to be used or are beyond repair are put into what they call the “graveyard”. They are put in the sun just outside the building and allow the moss and plants on the wireframes to turn into compost. It’s a bit eerie seeing what is clearly Disney characters sitting in the sun and slowly rotting away. One of the more impressive Topiaries was Lightning McQueen and Mater from Cars. They were fairly gigantic and extremely detailed. Sadly I did not get a photo of these guys.

The next stop on our tour was Central Shops. This is where Disney creates almost everything that is used in the parks. Vehicles for attractions, decor, character heads, animatronics, and almost anything else you can think of.

The main area of Central Shops is roughly 9 football fields long. This is where repairs, touch ups, and construction of new projects happen. It’s best describe as an assembly line. Where it goes in one end of the shop and comes out the other when it’s done.

Every imaginable trade is under this roof. Electricians, Plumbers, Mechanics, etc. You name it and there’s probably someone that does it.

In the main area we saw vehicles for Space Mountain, it’s a small world, Aladdin, elephants from Jungle Cruise, and other unknown pieces of attractions. Cast Members would either work on them in that spot or carry them off to one of the small shops.

We were shown a room where all the character heads are kept when they are being repaired or created. They didn’t allow us to go into the room but we got to peek through the window on the door. The heads were laying in such a way that we could only see the hole where your head would go. It was rather difficult to see what characters we were looking at. I did however manage to see the head of Winnie The Pooh sitting there, it’s as creepy as you think.

Next we got to see some animatronics that was in the process of being repaired. One of the baby elephants from the Jungle Cruise was being repainted as the water it was sitting in took it’s told on the poor guy. Carmen showed us that there is a lot of detail where guests will see the animal above water, but below the water line there isn’t much in terms of detail, since guests aren’t going to see that part. It had a simple coat of grey paint and looked rather plain.

Another animatronic we saw was one of the birds from the Enchanted Tiki Room. They were testing out some new technology to allow the birds to have more fluid movement. It was connected to a small box with various buttons on it. Pressing them in certain combinations would result in different movements. We got to play around with this and make the bird move around!

After Central Shops it was off to our last stop of the tour, the Magic Kingdom! We arrived just before the 3 o’clock parade “Celebrate A Dream Come True”. Our bus parked just behind City Hall and we went through one of the Cast Member entrances to Main Street. They had a spot reserved just for us right where the Parade begins. Carmen gave us a challenge to see if we can find the drivers inside the floats. I couldn’t see any because of the sun unfortunately. Carmen explained to us how they keep the music in sync throughout the entire parade and keep it going as the parade moves down the street. As most people know there are speakers hidden throughout the park and these are used to have the over laying beat for the music. Some speakers are only used during parades and are reviled when it begins. An example are small windows on the buildings along Main Street will slide open and close when the parade is over.

It’s a little complicated but the result is an in sync and flawless sounding parade for all the guests to enjoy! Once the parade had passed us we walked down Main Street and we were shown all the names that you can see if you look closely at the windows along Main Street. The names are of those that have contributed something extraordinary to the company. There are specific individuals who worked with Walt himself up there. There is even a window that is dedicated to all the Cast Members who make magic happen everyday!

Some time you are enjoying Main Street take a moment to look at the windows and take note of the names you see on them. After walking down Main Street we went to the right and walked towards Tomorrowland, we then went backstage right by the washrooms before you entered into Tomorrowland. I noticed that just before going from backstage to onstage there are mirrors so Cast Members can check themselves one last time.

Next up was heading down into the Utilidors under the Magic Kingdom. This is how Cast Members get from one end of the park to the other in a reasonable amount of time. Also it ensures that you do not see a Cast Member who works in Tomorrowland walking through Adventureland. Walt wanted to ensure the guests immersion was not interrupted.

This is where they transport food, characters, Cast Members, trash, and supplies across the park without interrupting the guest experience. If you notice you will never see a Cast Member dragging a huge pile of garbage across the hub in front of the Castle or Mickey making his way through Fantasyland to get where he needs to go. They always just appear or disappear. Pay close attention to where you see characters head off to when they are going for tea next time!

The garbage shoot is a tube that runs along the ceiling and it’s a vacuum that sucks the garbage through to where it’s all kept. There are bicycles everywhere, these are used by Cast Members to get from one place to another rather quickly. You will also notice battery powered vehicles carrying supplies back and forth.

It was very surreal seeing all the different Cast Members in their costumes. Unfortunately we did not see any head or face characters in the tunnels. There were huge maps of the tunnels at every major “intersection”. I can see how one can easily become lost.

The Utilidors are actually built above ground level and the Magic Kingdom park is technically the second floor. The reason for this is since the area is mainly swamp and building anything below ground level would result in flooding.

That is it for our time at the Magic Kingdom and it was back to the bus to head back to EPCOT.

Sadly this is where our tour ended. As a gift for being on the tour we were given a special collectible pin that you can only get from coming on the tour. We were told to make sure we don’t allow a 10 year told trade us for them in the parks. 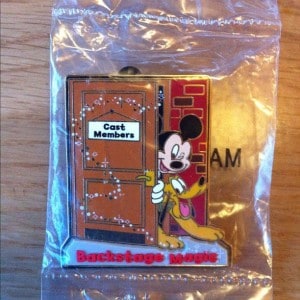 Backstage Magic Pin – Only given out to those that go on the tour!

We then spent the rest of our day in EPCOT taking in the attractions and beer! Tried MISSION: Space on the more intense side for the first time. The entire tour was much more than I was expecting. Learning about how parts of the parks operate is completely fascinating. For me personally it didn’t take away from the magic but only enhanced it. The price tag is a little steep but if you are a huge Disney fan then it’s worth every penny, and who can say no to a collectible pin? I highly recommend this tour if you love learning how Disney creates some of their magic and wish to do something different for your next visit!

Thank you for reading and if you have any questions or comments please feel free to leave them!