To bid farewell to Astro Blasters, Hong Kong Disneyland has a new greeting, as well as special merchandise for fans of the ride-through shooter.

Magic Access Members will receive an exclusive Buzz Lightyear notebook by presenting an on-day receipt showing spending of HK$350 (US$45) or above in the resort. Members can also pickup a special Astro Blasters Commemorative Booklet too by heading to the Magic Access Member Service Center and showing their valid membership card.

With Buzz Lightyear Astro Blaster closing, the park will be saying goodbye to one of its opening day attractions but taking another step towards its multimillion dollar transformation.

Last November, Disney announced the closure of Astro Blasters as part of the Marvel-themed plans for Tomorrowland. With the Iron Man Experience opening in January 2017, the next step would be the transformation of Astro Blasters into an Ant-Man attraction. 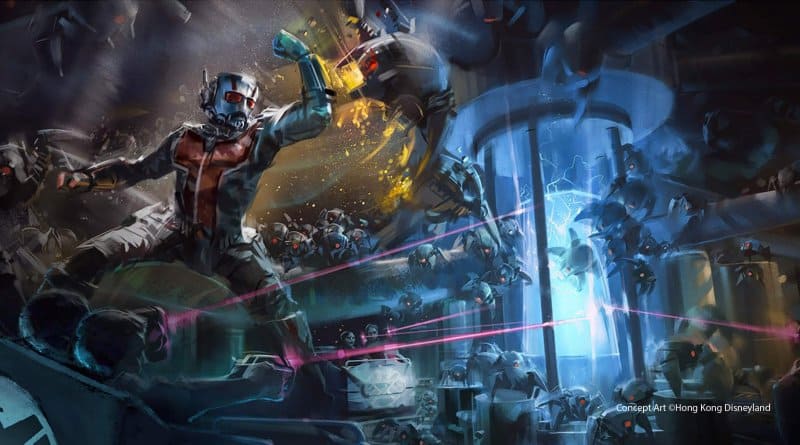 With this week’s announcement, Disney has confirmed Astro Blasters’ closure, but Ant-Man’s involvement may have been shrunk down to size (sorry!). The press release now describes the attraction as a “Marvel-themed interactive shooting game” where guests “join Marvel Super Heroes to defeat invaders in this new attraction”. Perhaps Disney has decided to expand the number of characters to capitalise on its ever growing roster of heroes.

No matter the characters featured, there’s no doubt that Marvel is coming to Hong Kong in a big way, with a new Avengers attraction in its own Marvel-themed land slated for 2023.

Information and concept art from the official press release as well as the Hong Kong Disneyland website.

Planning your trip to Hong Kong Disneyland? Read our Ultimate Guide to Hong Kong Disneyland to learn everything you need before your trip. Including how to get discount park tickets, where to eat, and where to stay! To learn more about the Disney Parks in Asia, sign up for our weekly newsletter to get the best in advice and updates sent right to your inbox!