D23 Expo Japan has come and gone. We laughed, we cheered, we spent way too much money!

The TDRExplorer team was out in full force and brought you the best of the expo! Check out our live blog and podcast to see what happened. From more information on the 15th Anniversary at Tokyo DisneySea to the painstakingly detailed exhibits, here’s our recap of the D23 Expo Japan 2015. 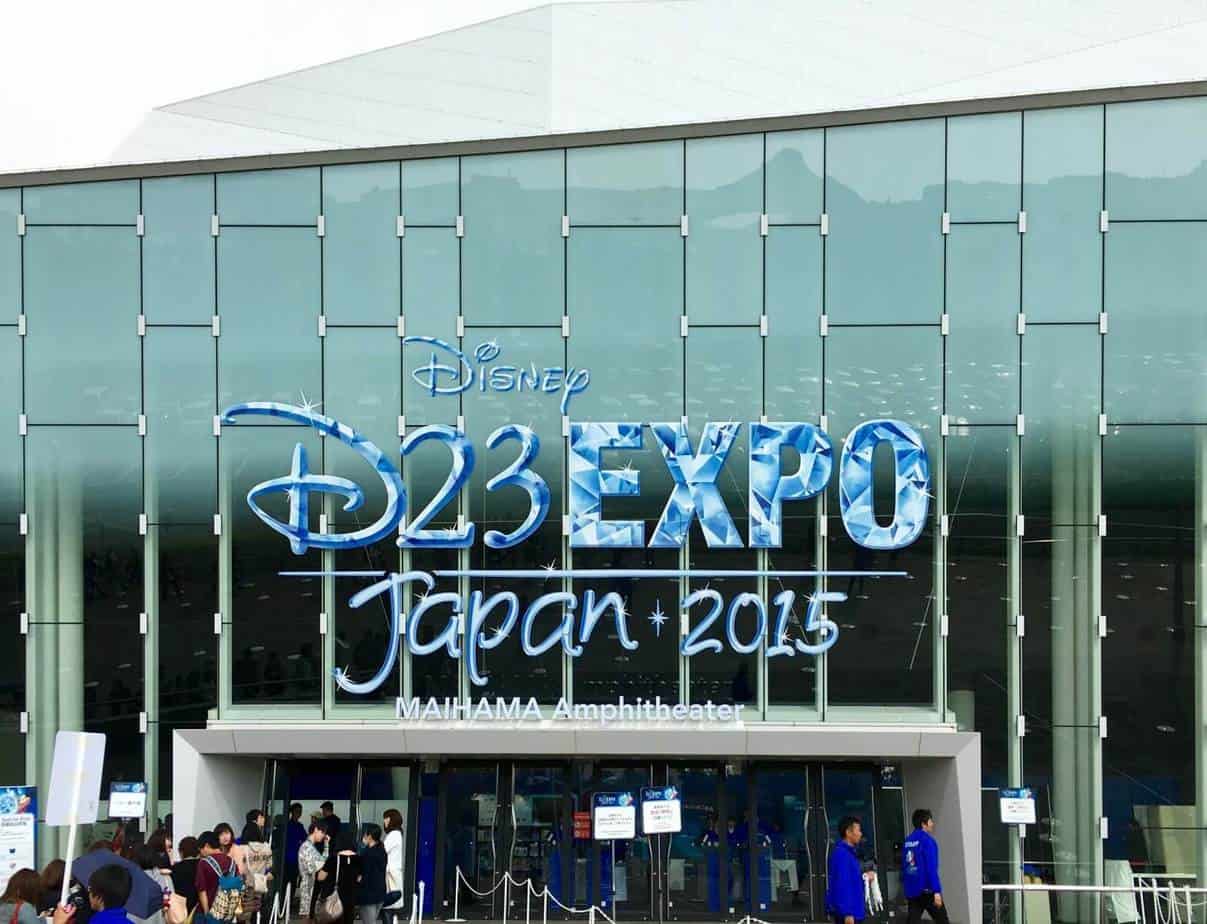 The expo was split across the three official hotels and the Maihama Amphitheatre, which is all on Tokyo Disney Resort property. Even with the massive number of attendees, not once did anything feel crowded or unorganized.   Compared to the earlier Expo in 2013, the crowd control and flow was well-managed.

Other event organizers should take note of the excellent crowd control and staffing used for D23. Signage was everywhere and staff was readily available to help.  Most of the signage was in English, although some detailed signs were lacking a bit.  The exhibits had a bit of English available too.  This made them easy for everyone to enjoy! Overall, if you did not understand any Japanese you would be just fine.

With the many signage and staff readily available this made moving from venue to venue stress free and actually an enjoyable experience. 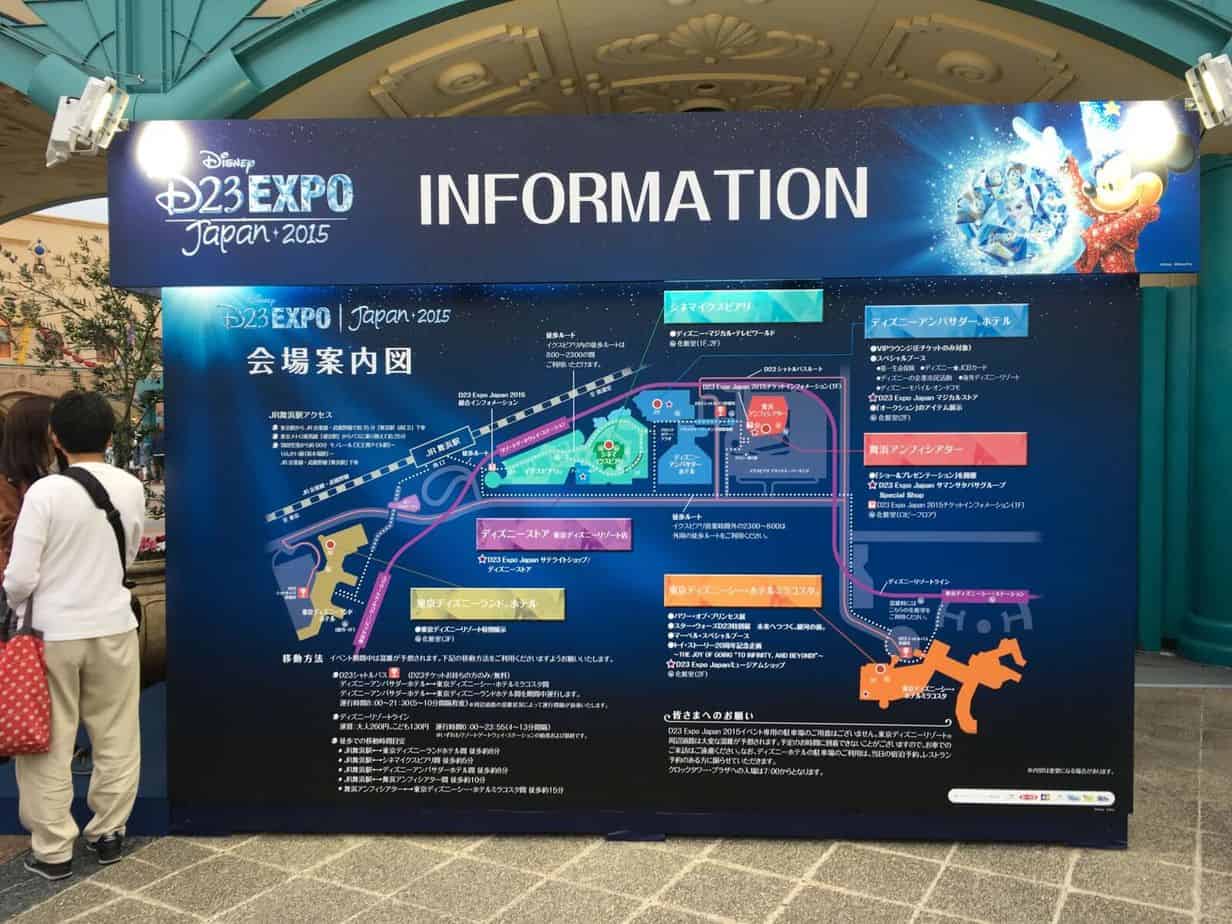 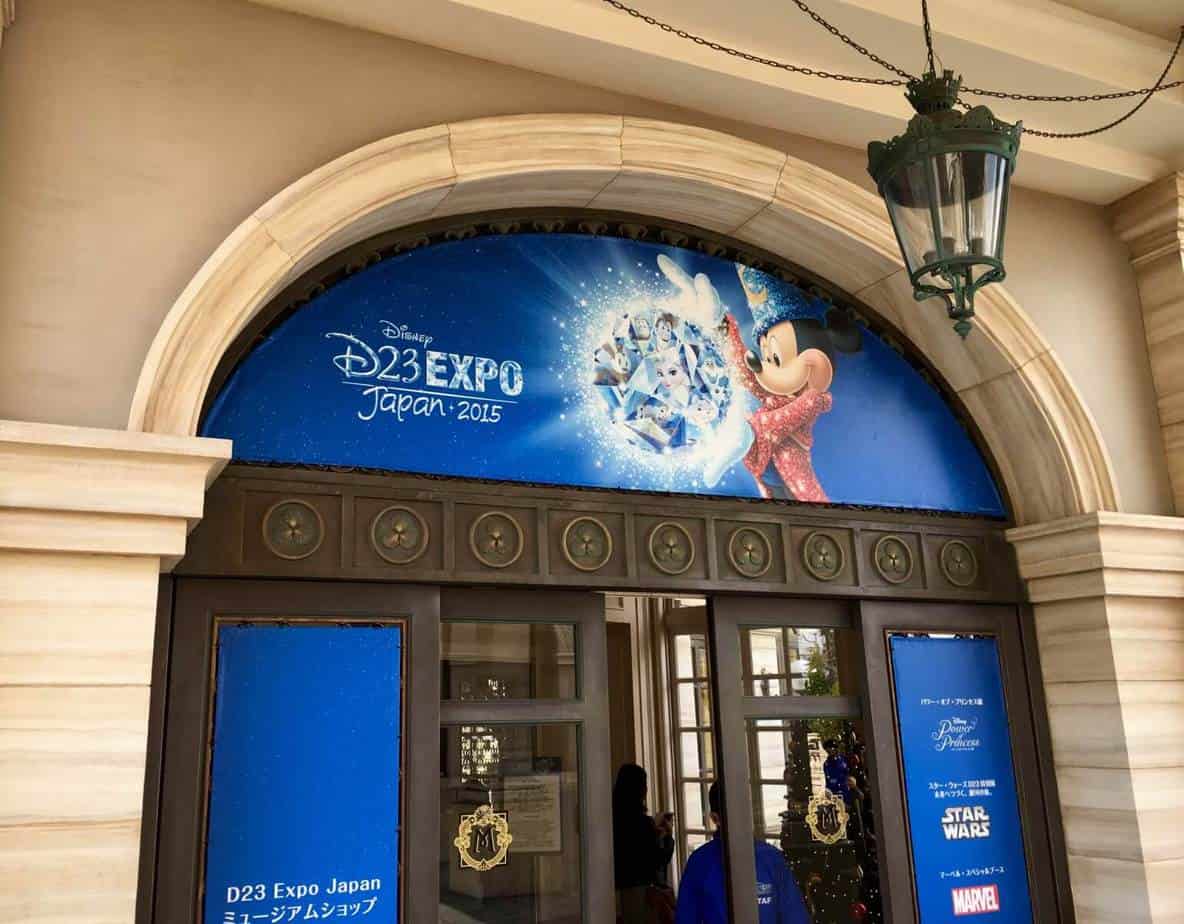 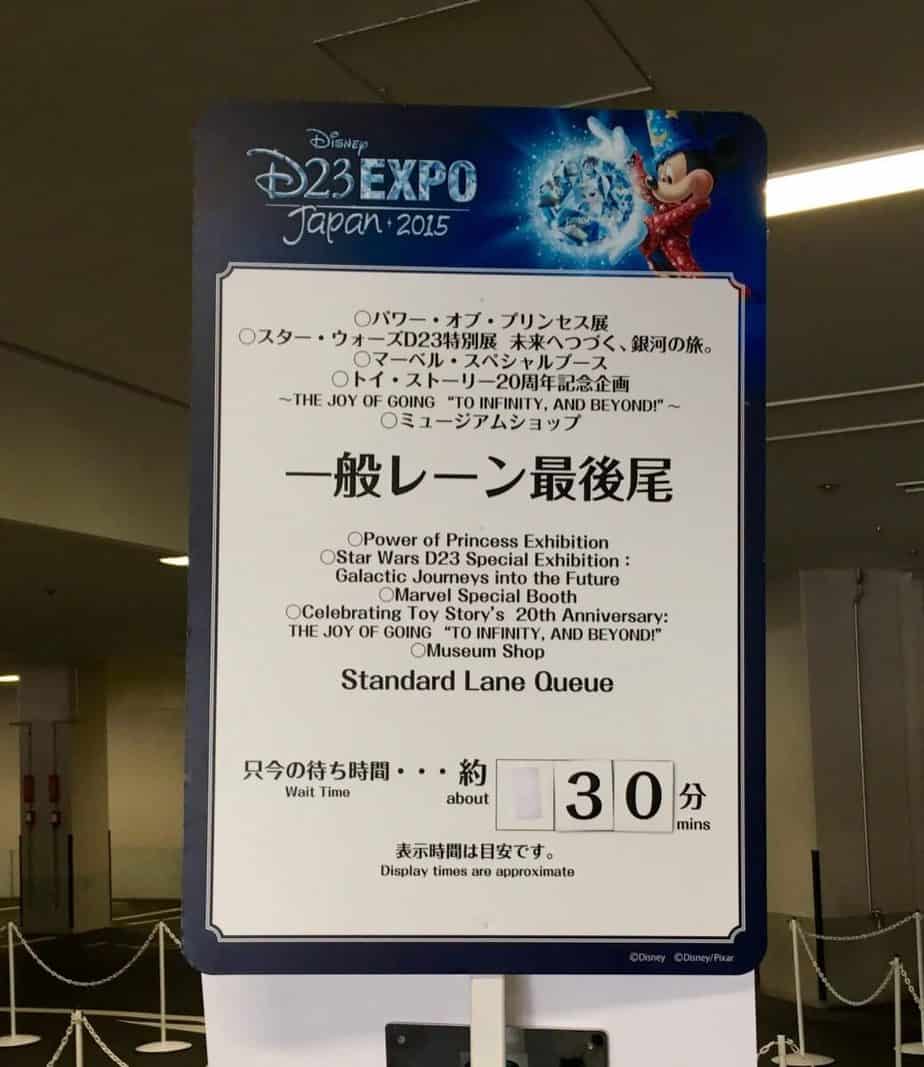 No event is complete without exclusive merchandise, and D23 Expo Japan delivered on all fronts. With all the pins, folders, pen cases, t-shirts (yes they actually had t-shirts), and other staples, you were bound to find something you wanted.

For those with more expensive taste, Japanese designer Samantha Thavasa offered an exclusive line of products at D23. The wait time to get into the store was over 120 minutes for most of the day – which meant the goods were flying off the shelves. 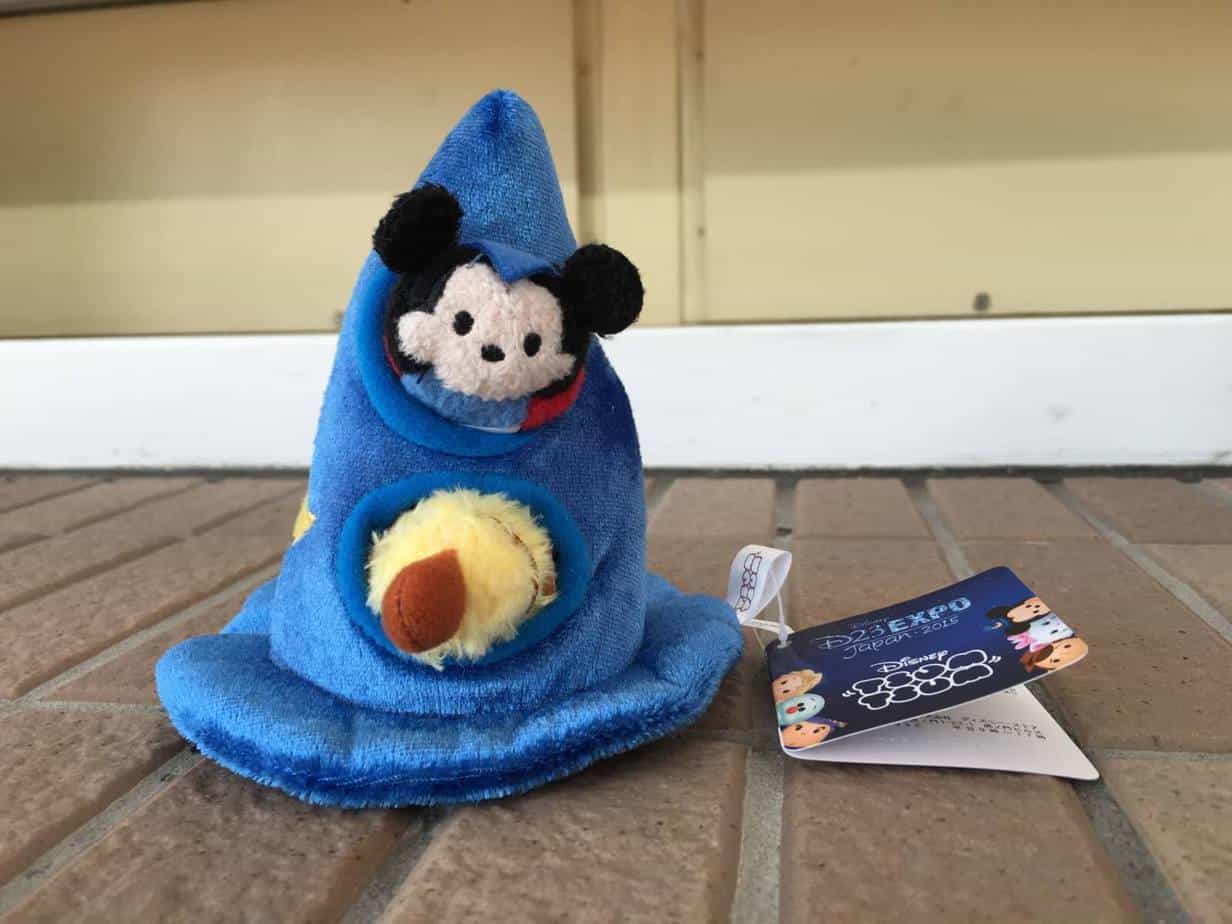 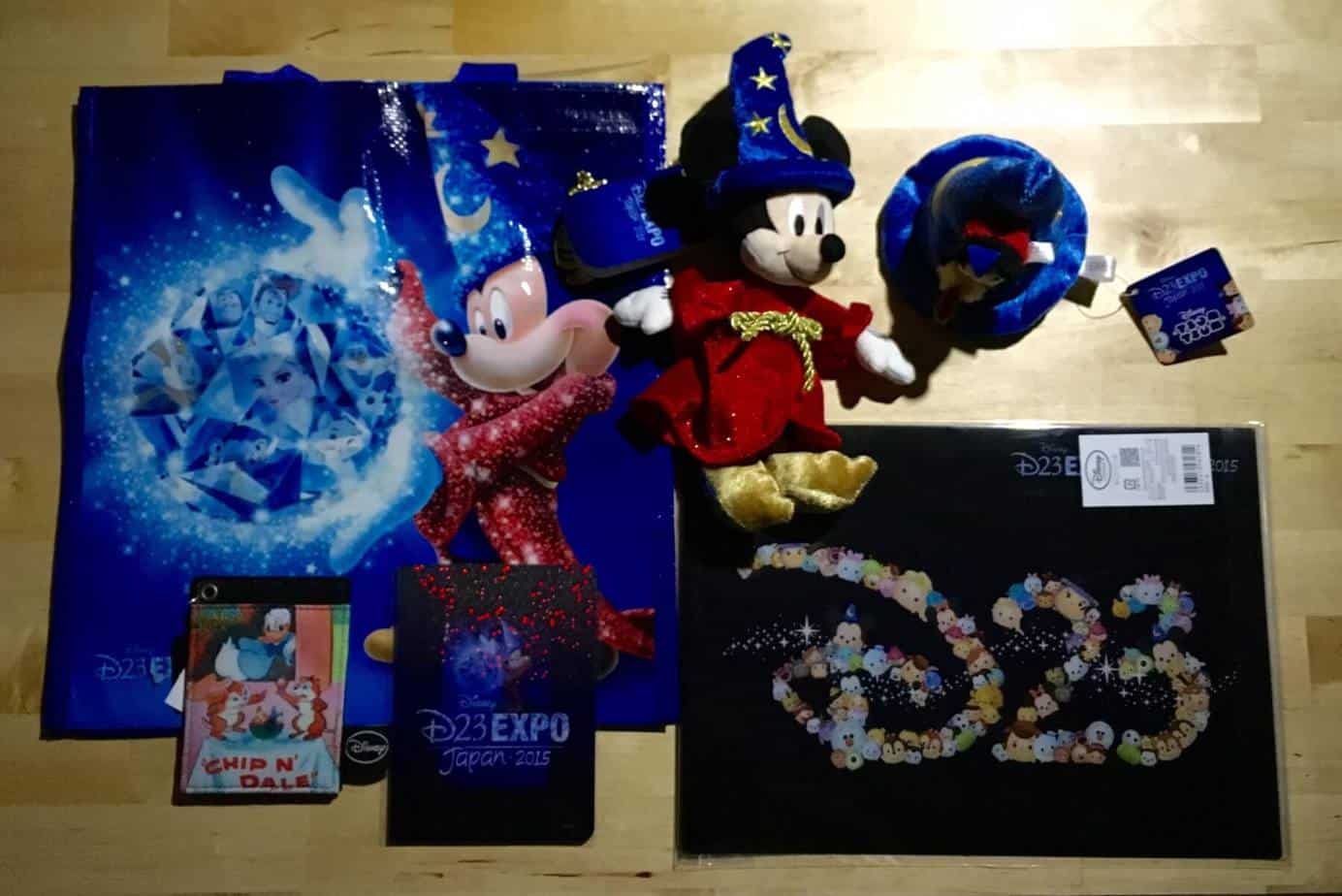 Along with D23 Merchandise, Star Wars had a huge presence with anything they could slap a logo on.

Most notable among the Expo merchandise (and popular – judging by the barren shelves) was the iPhone 6 Cases and miniature Tsum Tsums. We were lucky enough to get our hands on an exclusive Mickey Tsum Tsum from Fantasia. 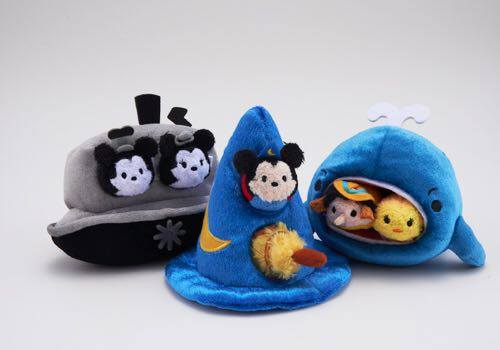 As part of our ticket to D23, we were selected to view the special program for Tokyo Disney Resort.  More specifically, the one hour presentation focused on Tokyo DisneySea and its upcoming 15th anniversary in 2016.

The show started with a short presentation from the President of OLC, Kyoichiro Uenishi. He spoke about Tokyo DisneySea, recapping information already known about the expansion at the park.  He also talked about how the park is constantly evolving and growing – during which time video played behind him showing the construction of Tokyo DisneySea.  My favourite footage was of the Harbour, Aquasphere, and Lost River Delta filling up with water for the first time!

After his presentation started the best part of the entire show. Mickey and Minnie came out on stage wearing the same outfits which were worn on opening day at DisneySea. The crowd went absolutely ballistic as if The Beatles just appeared on stage, the energy was infectious.  Over the next 40 minutes, a huge stage production focused solely on Tokyo DisneySea and explaining the theme to “The Year of Wishes” 15th anniversary celebration, and what we have to look forward to.

Before getting into details about “The Year of Wishes”, let’s take moment to go over this amazingly well produced show. The best way to explain the show is it was the ultimate in fanfare. Dancers performed mashups of routines from popular shows which once took to the stage (and harbour) of park. This was complete with costumes, music, and dance routines. The crowd absolutely ate this up and joined along in many of the dance routines. Notable shows included:

A send off for the soon-to-be-closed Storm Rider and the already closed Mystic Rhythms was included in the show. Complete with Cast Members in the Storm Rider cast member uniforms came out to say goodbye to one of the original opening day attractions.

Big Band Beat is getting a refresh for the 15th Anniversary, and the main singers for this already magnificent show were part of the walk down memory lane taking singing roles in some of the performances.  At the end of the show they unveiled the new theme song for the 15th anniversary along with the stunningly beautiful costumes Mickey and friends will ne wearing for the celebration. The crowd cheers were deafening when the costumes were revealed.

Overall the performance itself was worth the price of a D23 ticket alone. If you have ever seen a performance at Tokyo DisneySea, then you know how top-notch the entertainment is. Take that and times it by 10 and you got quite possibly the best show I have ever seen put on by the resort. 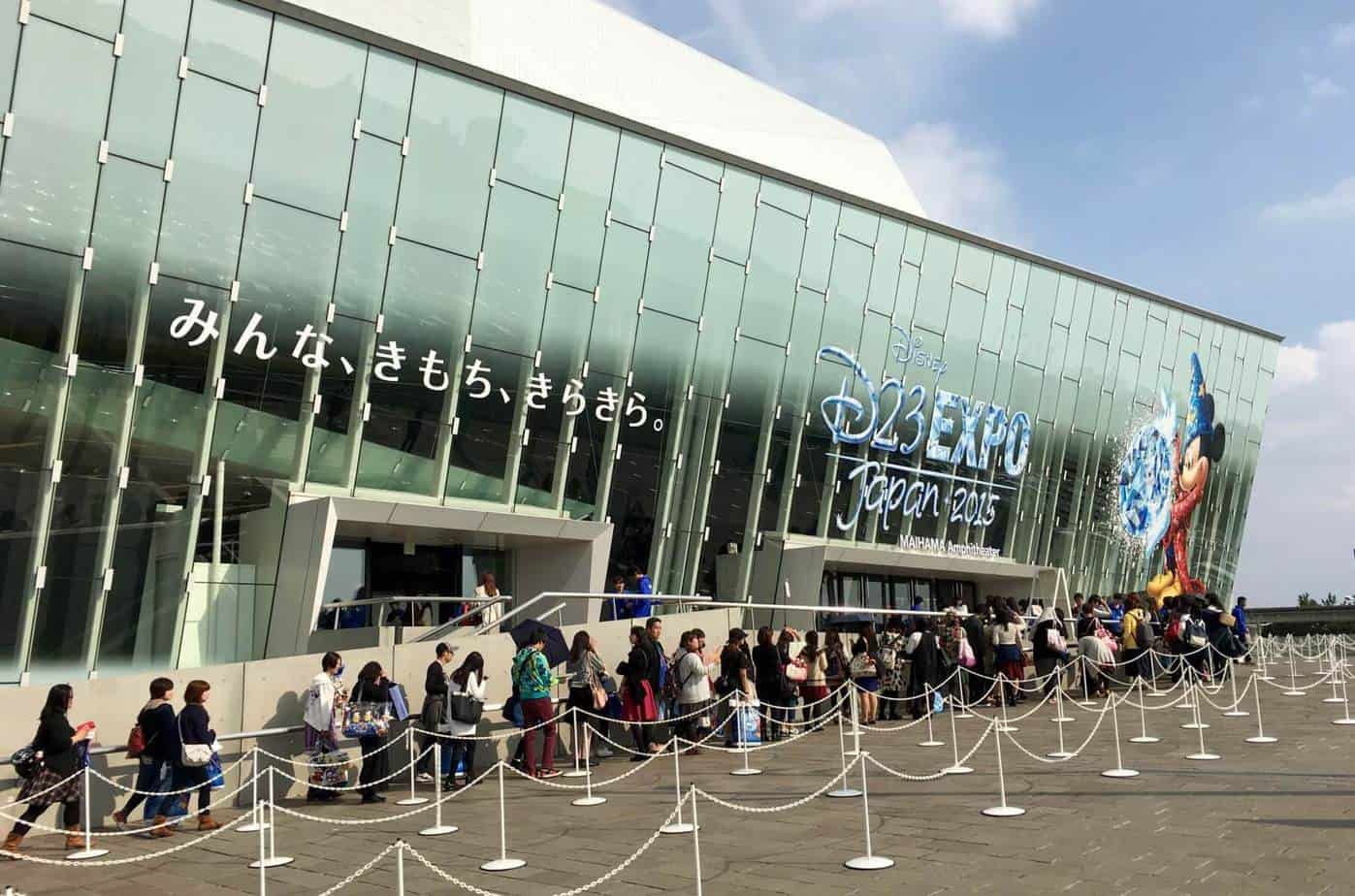 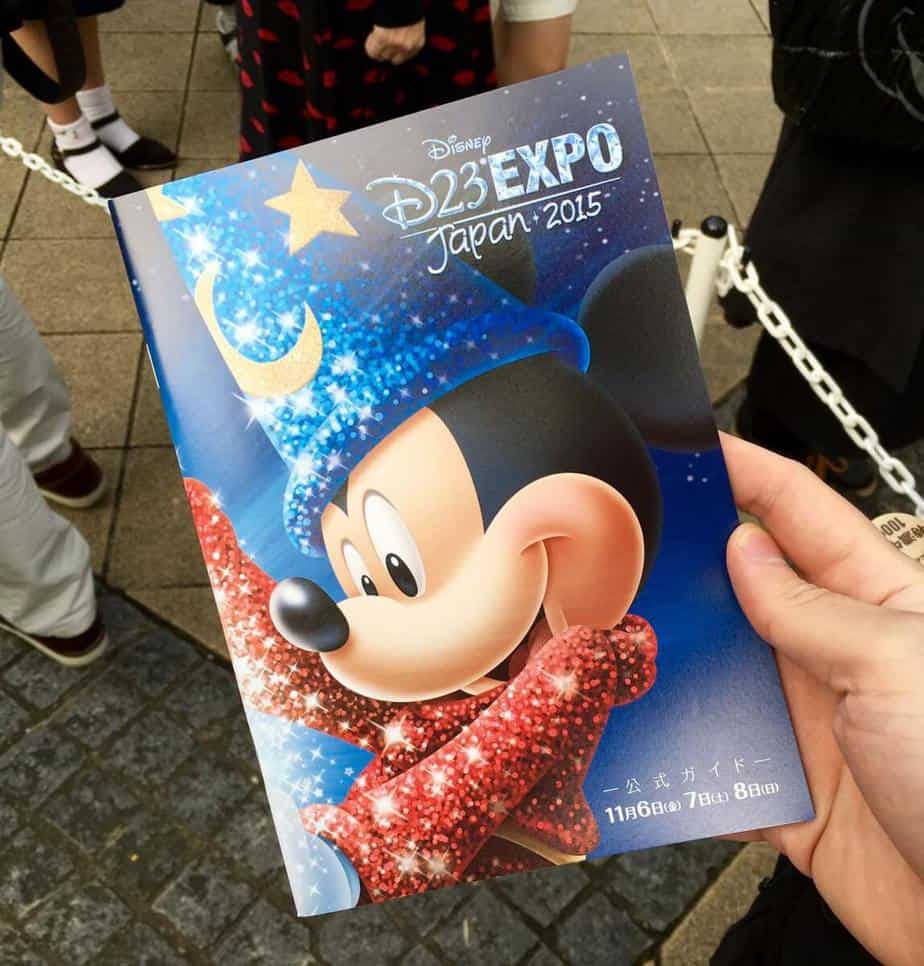 Now, while we were in awe during the entire performance they explained more details to the new anniversary happening at Tokyo DisneySea starting in 2016. While not all the information was brand new, we learned a few things:

Overall, there was nothing earth shattering announced, but it was nice to hear the theme song and see the costumes that Mickey and friends are wearing for the celebration. We have to say, they are gorgeous and the merchandise should (rightly) fly off the shelves!

Over at the Hotel MiraCosta was an exhibit featuring Disney Princesses, Marvel, Star Wars, and Toy Story. The only part of the exhibit that was the least bit interesting was the Star Wars section. It showcased merchandise from the grand opening of Star Tours at Tokyo Disneyland and some of the costumes from the upcoming film, Star Wars : The Force Awakens.

Tokyo Disneyland Hotel showcased what our team thought was the best exhibit of the Expo.  It featured incredible details about the making of Tokyo DisneySea – from a concept in 1992 to the park we know today. The best part of this exhibit was all the information was also in English. Everything from concept art to details on which manufacturing companies provided different textiles and materials for the different ports. A small-scale replica of the park was in the middle of the room, which was incredibly detailed and gave guests a unique bird’s-eye view of the park.

Costumes from The Legend of Mythica, Easter in New York, Style, Mystic Rhythms, and other past shows were on display.  This was accompanied with a wall sized projection showing a series of videos of all the past shows at Tokyo DisneySea.

Unfortunately, none of these exhibits allowed photography or video, so you just have to live with my descriptions above! 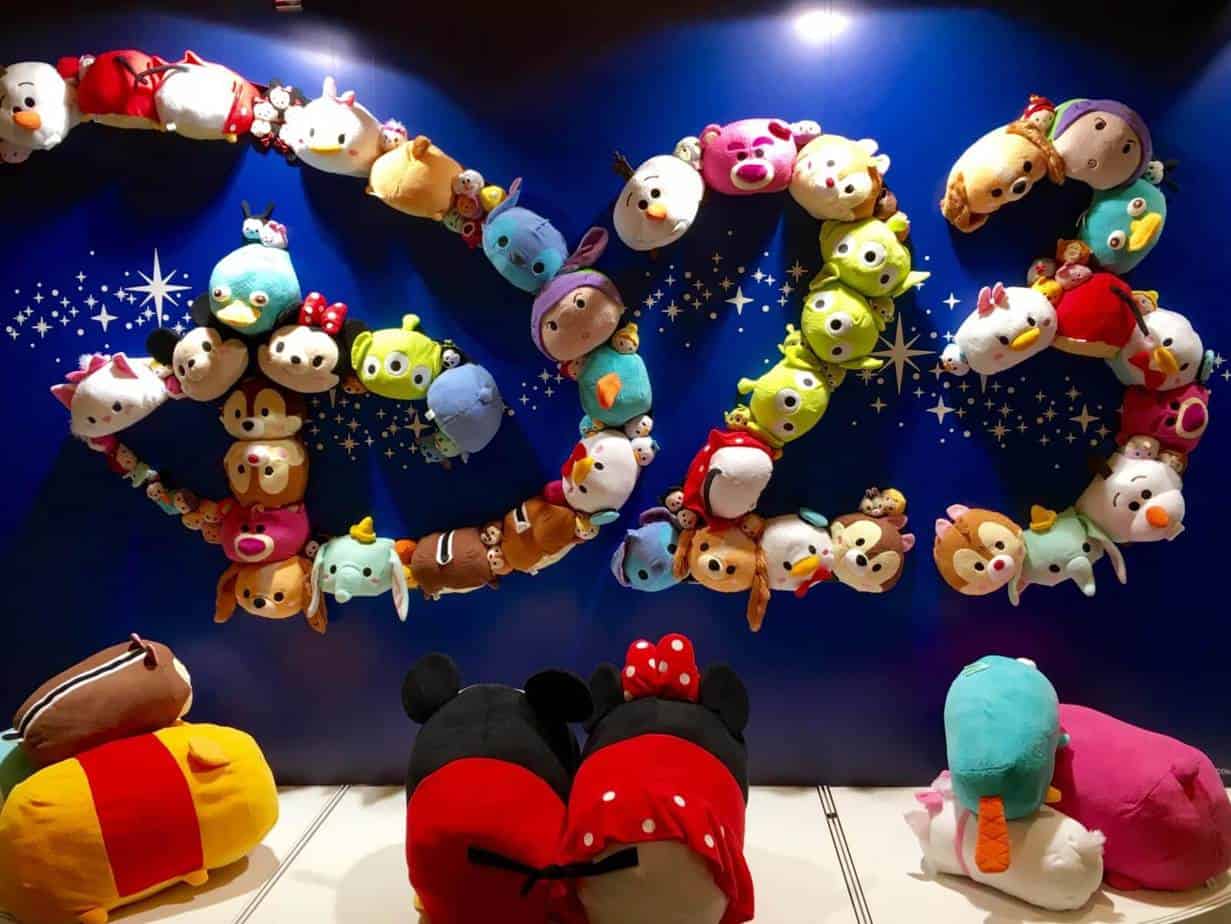 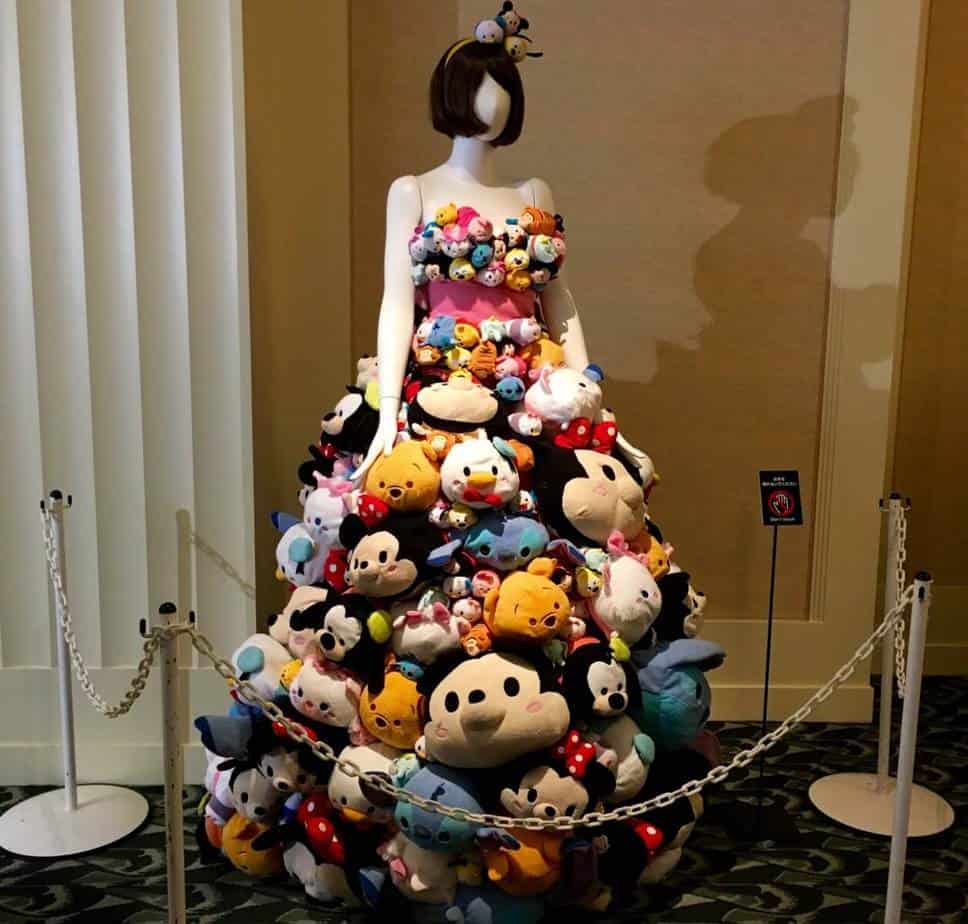 While no huge announcements were made about the massive expansion at the Resort, plenty of information about the anniversary at Tokyo DisneySea is good enough to tide us over for now.

The exclusive merchandise choice was bountiful, albeit incredibly expensive.

The exhibits at the official hotels gave guests enough of a reason to line up for a couple of hours to experience.

While we cannot recommend making a special trip just for D23 (that could change for the next event), it is certainly worth checking out if you can get tickets and are in Tokyo.

Were you at #D23ExpoJapan this year? Let us know what you thought in the comments!