If you are a Disney Parks aficionado who is most familiar with Walt Disney World and you are planning a trip to Japan—or just thinking about it—you may be interested to know how Tokyo Disney Resort lines up with its Florida counterpart.  Here, we take a look at the differences between the two resorts in terms of attractions and theming.

This is the first post in a two-part series. There is a lot of ground to cover with this topic, so in the first post we will limit the discussion to three areas: 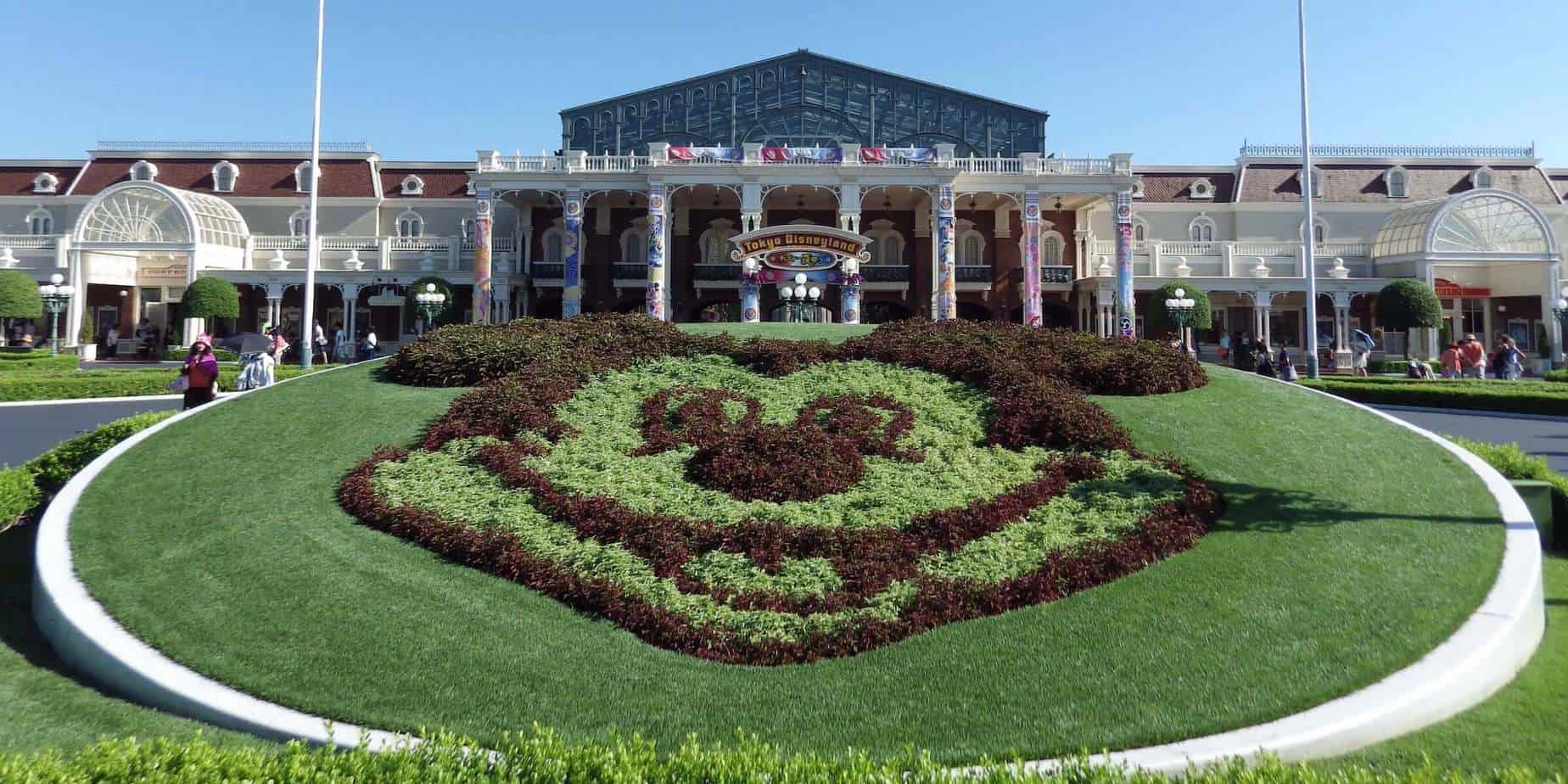 Rather than trying to do an exhaustive comparison of every nook and cranny, we’ll be giving more of a broad overview here (with photos for visual reference) of some of the major differences between the two resorts. Let’s step through the looking-glass now and see how Tokyo Disney Resort mirrors the wonderland of Walt Disney World, while also reflecting its own unique personality as the “Kingdom of Dreams and Magic.”

Although there are now 6 resorts and 12 Disney theme parks around the world (not counting water parks), Tokyo Disney Resort will forever hold the distinction of being the first international destination for Disney. Tokyo Disneyland was the fourth park to open overall and the first park to open outside the U.S. It opened in 1983, a mere six and a half months after Epcot, and other than that park, only the Magic Kingdom and the original Disneyland in California date back further.

Back in 2013, when Tokyo Disneyland was celebrating its 30th anniversary, theme park historian Jim Hill revealed some interesting details on the Disney Dish Podcast about how Tokyo Disneyland was originally conceived. Apparently, during the park’s development, representatives of the Oriental Land Company (the owners and operators of Tokyo Disney Resort) would travel stateside from Japan, walking through the two existing U.S. parks and pointing to features like Cinderella’s Castle, saying, “We want that.” 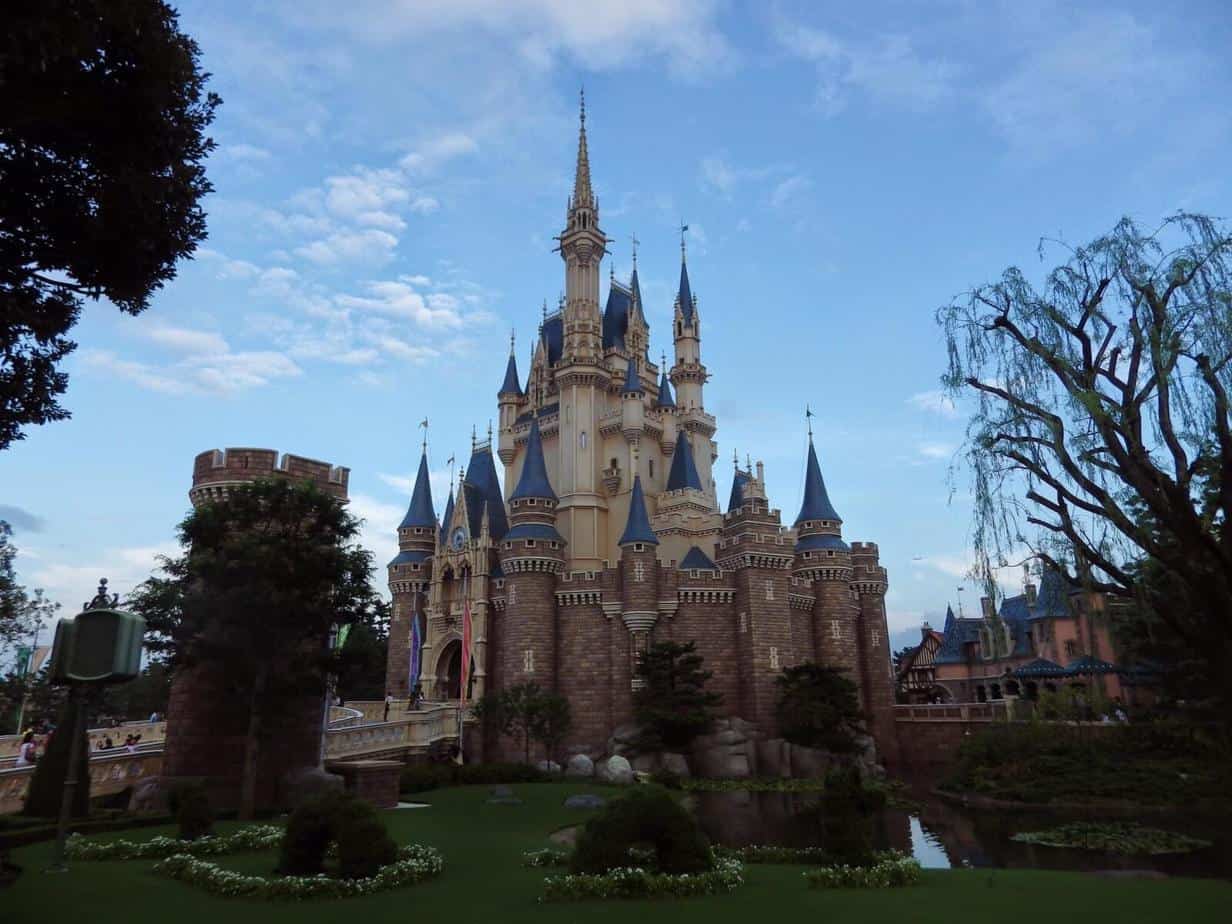 As a result of this cherry-picking, Tokyo Disneyland developed into something of a hybrid between the Magic Kingdom and Disneyland Park. People have likened it to a “greatest hits” version of Disney, for how it takes tried-and-true elements of both parks and mashes them up into a well-oiled Japanese hospitality machine. Yet while there is a great deal of overlap between Tokyo Disney Resort and Walt Disney World, there are also some important differences, particularly where Tokyo DisneySea is concerned.

Tokyo DisneySea opened in 2001, about five months after Universal Studios Japan. With this park, Disney’s Imagineers were given greater license to come up with new concepts, perhaps because the Oriental Land Company had enjoyed enough success with the first park that they were willing to take more chances. This led to elaborate theming in some of the new attractions the Imagineers devised, like Journey to the Center of the Earth. Reading the backstories for that ride and other attractions, such as 20,000 Leagues Under the Sea and Indiana Jones and the Temple of the Crystal Skull, really helps foster an appreciation for the insane level of creativity on display at Tokyo DisneySea.

Differences in the Theming of Lands/Ports 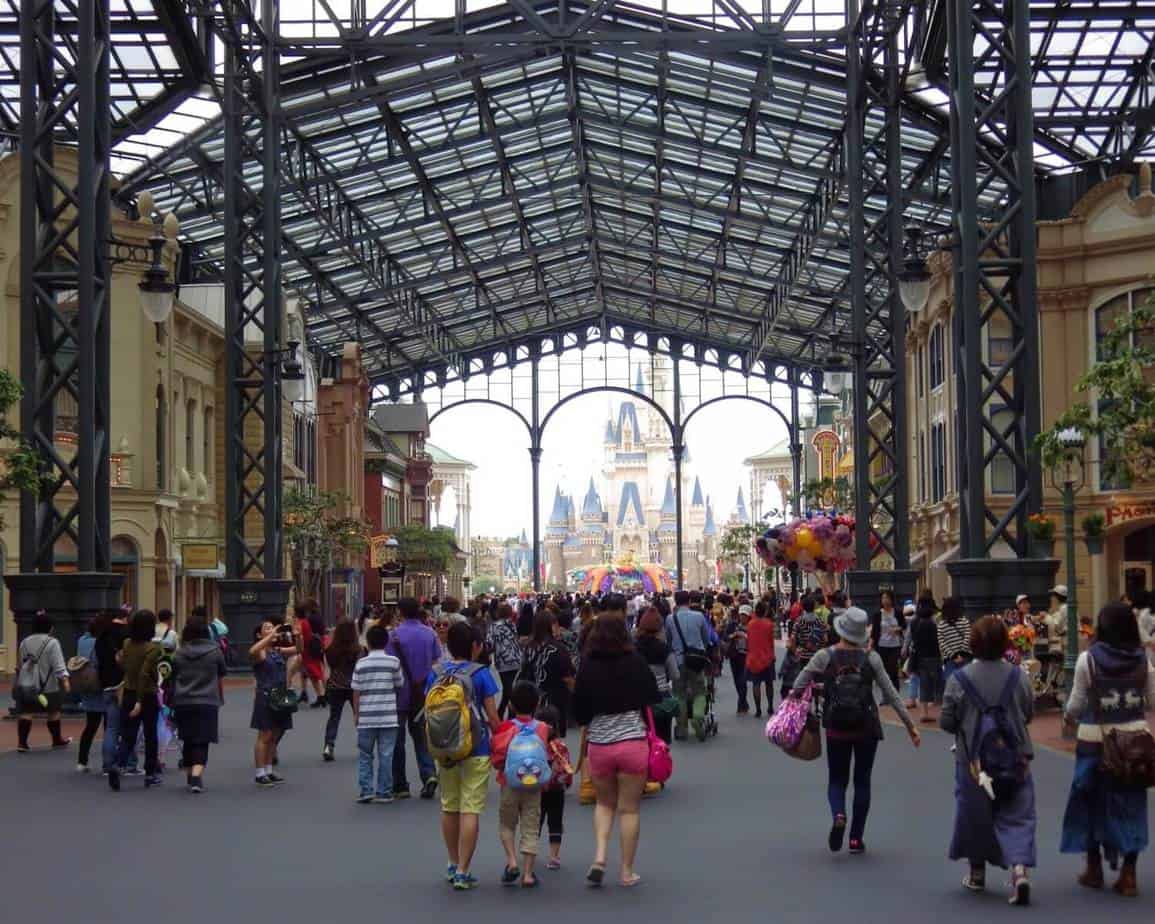 The geographical layout of Tokyo Disneyland is very similar to that of the Magic Kingdom, with a few key exceptions. Instead of heading down Main Street, U.S.A. when you walk in, you will pass under a huge canopy through the World Bazaar. This immediately braces the park-goer for a kind of Bizarro Magic Kingdom experience.

There are no horse-drawn carriages in World Bazaar, so you will not have to side-step any horse droppings like you might have to on Main Street. Instead, you are more likely to see a man on a bicycle piano interacting with guests in Japanese. 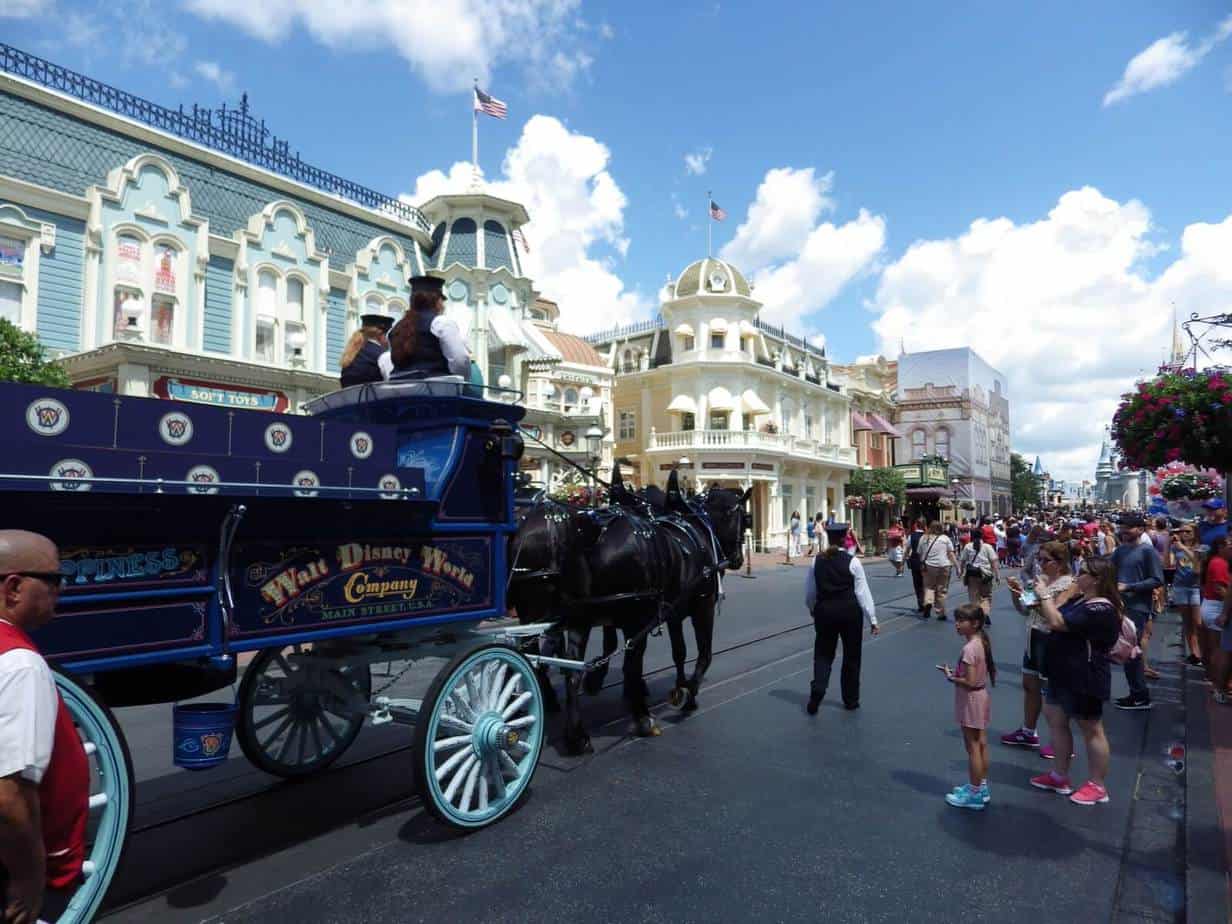 A horse-drawn carriage moving up Main Street, U.S.A. at the Magic Kingdom. 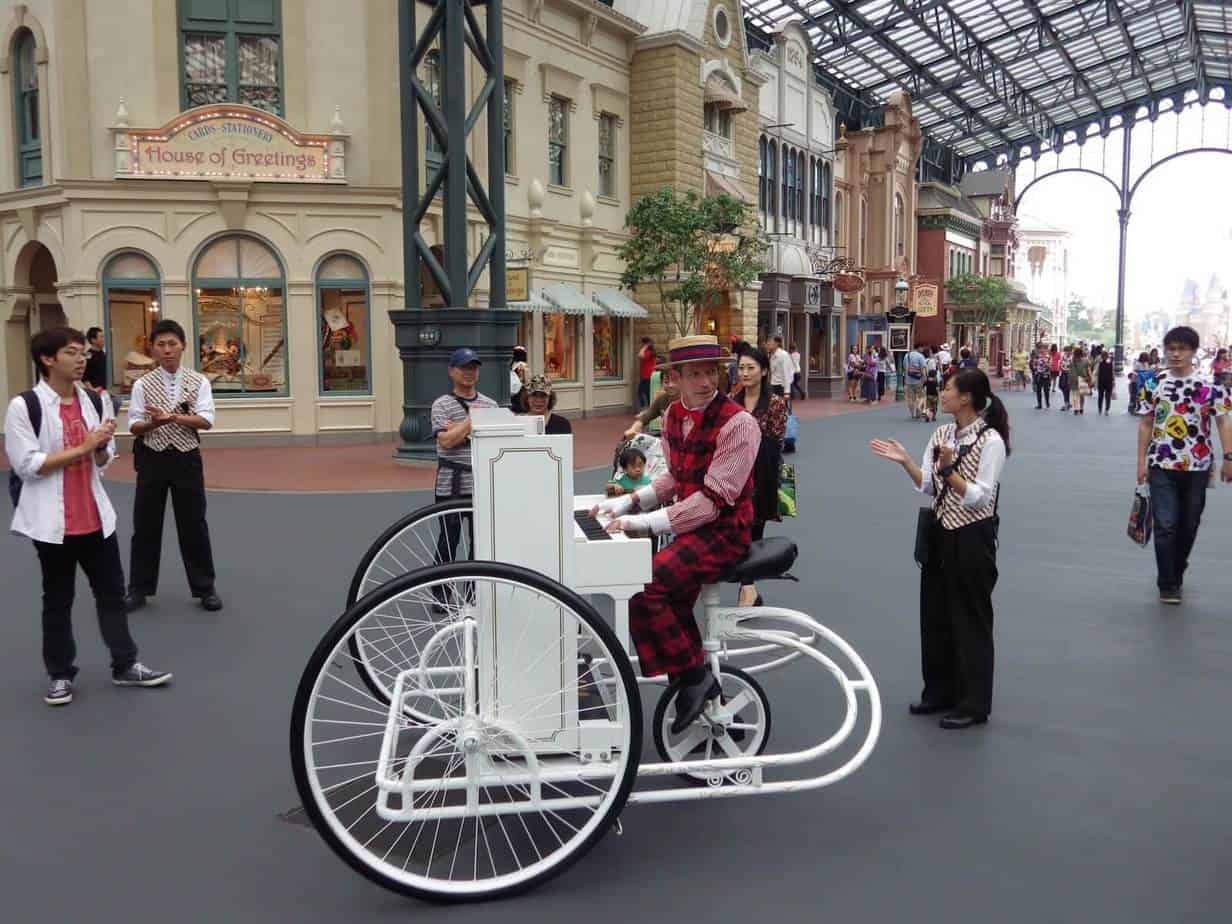 The bicycle piano man in World Bazaar at Tokyo Disneyland.

Restaurant Hokusai, which is an eatery that serves Japanese food, is located here. In addition, World Bazaar has an intersection in the middle of it, where it is crossed by Center Street, leading to Tomorrowland on one side and Adventureland on the other side.

Gone from Adventureland are the Magic Carpets of Aladdin and Agrabah Bazaar. Those are found over at Tokyo DisneySea, which has its own proper “port of call” built around the Arabian Coast theme. At DisneySea, they are known as Jasmine’s Flying Carpets and the Agrabah Marketplace. 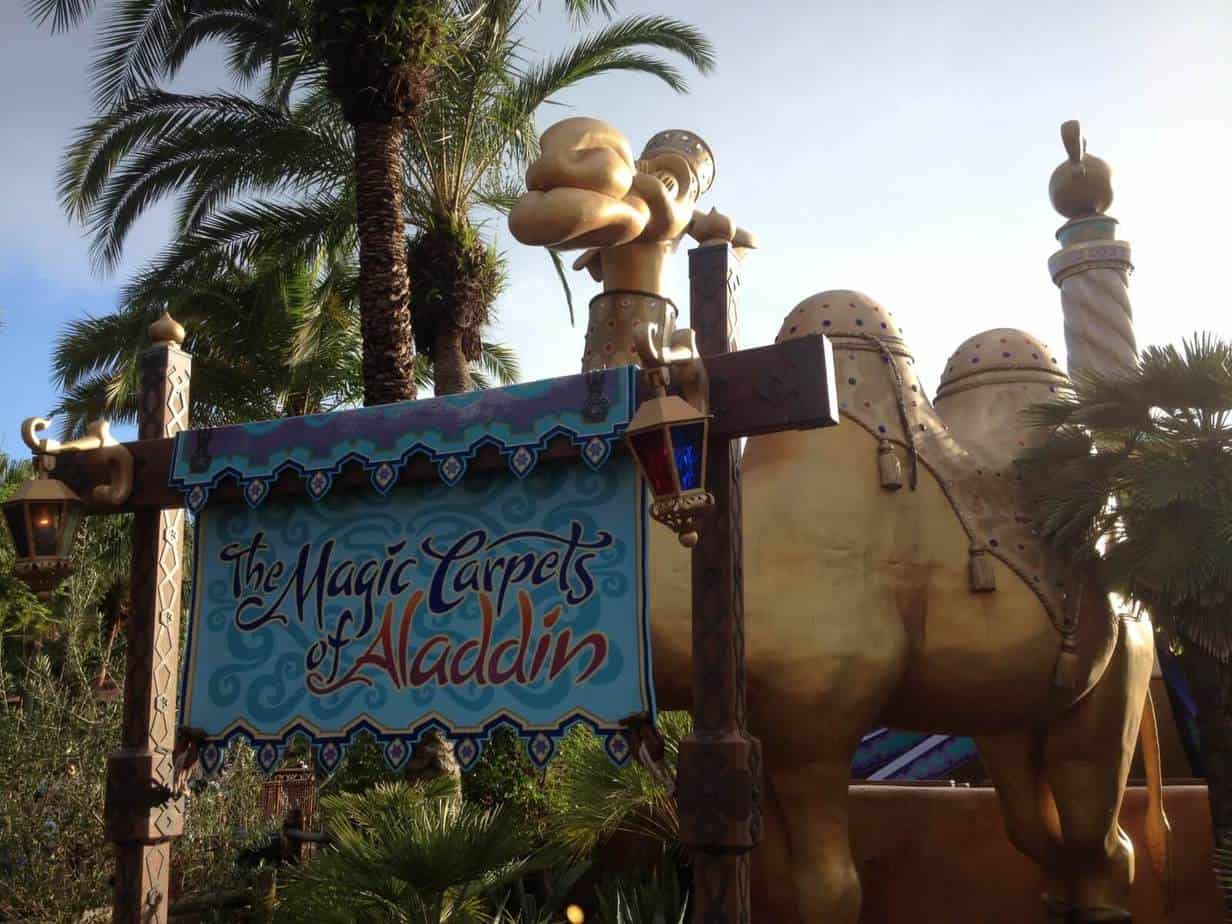 The spitting camel and Magic Carpets of Aladdin sign in Adventureland at the Magic Kingdom. 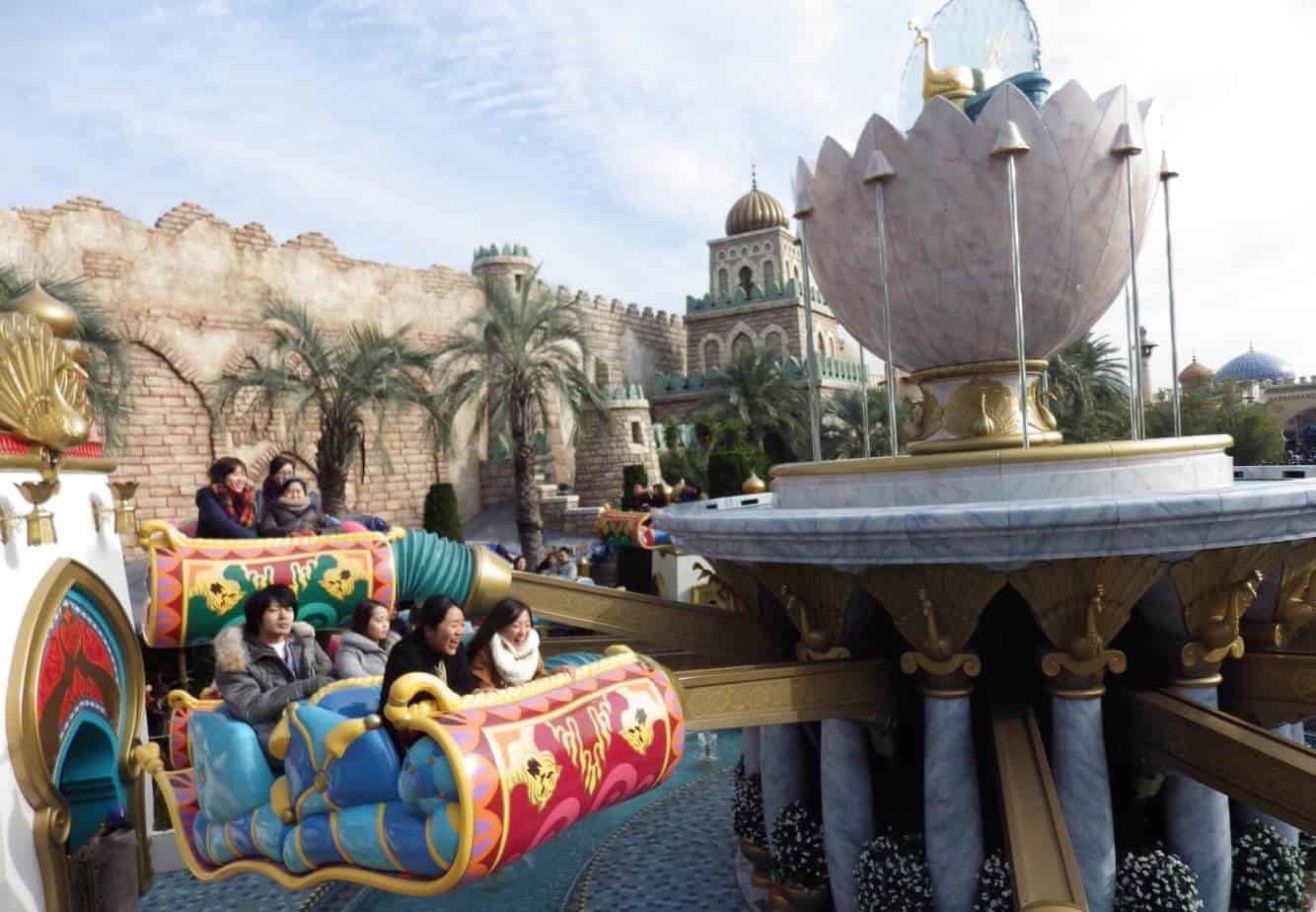 At Tokyo Disneyland, Frontierland also has a different name. It’s called Westernland, and it’s bordered by the mini-land of Critter Country, which is actually where Splash Mountain is located. Furthermore, though it boards in Adventureland, the Western River Railroad only winds around the Rivers of America and through Big Thunder Mountain in Westernland. Unlike the Walt Disney World Railroad, it does not encircle the entire park or have any stops.

There is no Liberty Square at Tokyo Disneyland, which makes sense, given that an attraction like the Hall of Presidents would probably not hold the same interest for Japanese park-goers. This means, however, that some of the other classic rides in Liberty Square have been shifted over to other lands at Tokyo Disneyland. The Liberty Square Riverboat now paddles Westernland’s Rivers of America as the Mark Twain Riverboat, while the Haunted Mansion has been given a new home in Fantasyland.

Speaking of which, Fantasyland and Toontown are currently undergoing a multi-million-dollar expansion at Tokyo Disneyland. In the years to come, visitors can expect to see more new attractions that are exclusive to the Japanese parks open in these two lands. 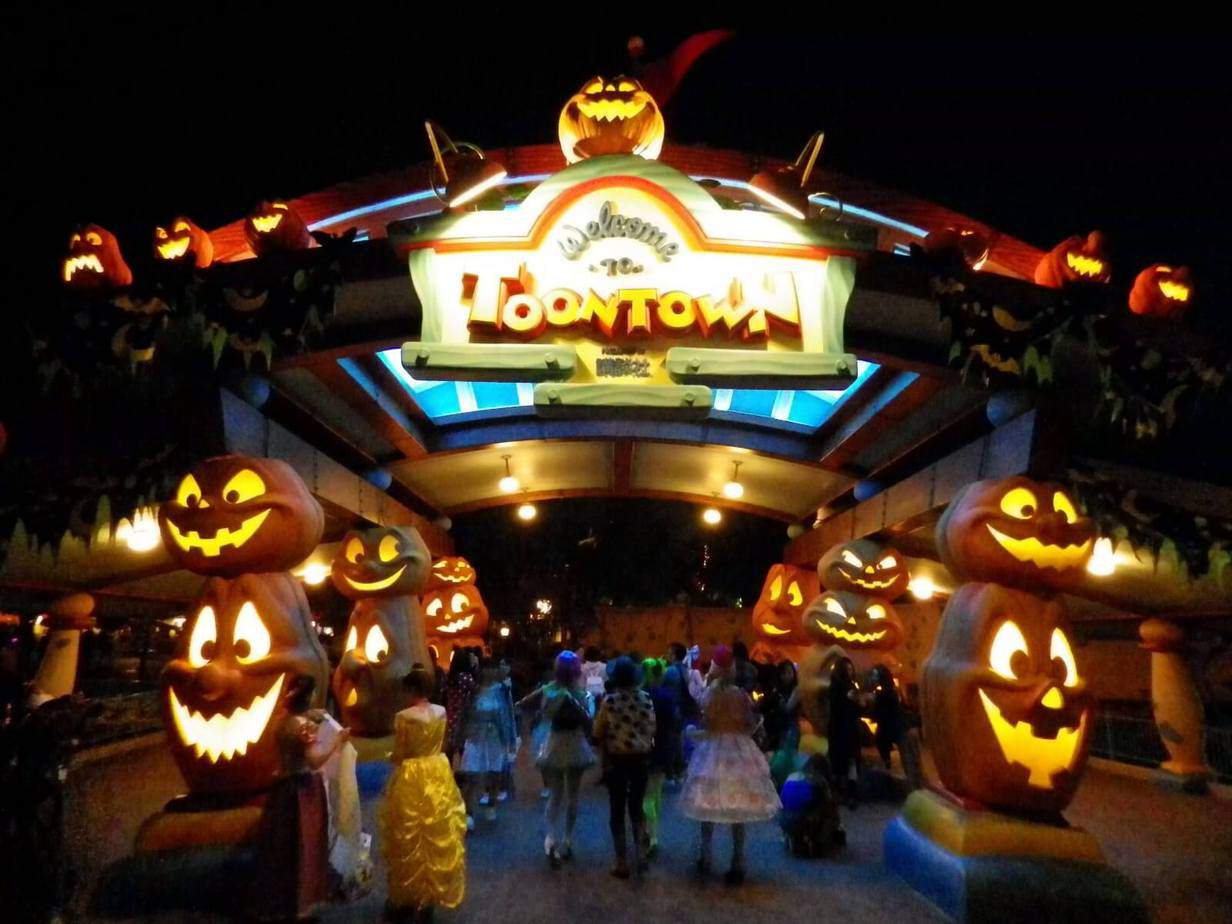 The entrance to Toontown, decorated with Halloween pumpkins in 2015. 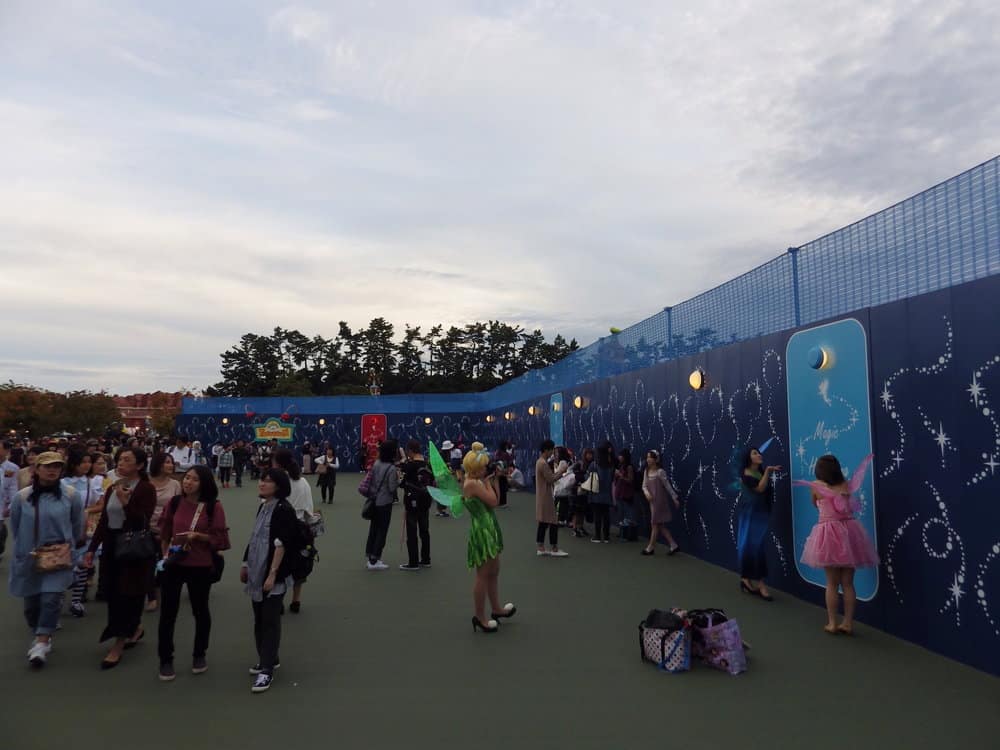 In 2017, a construction wall went up over Toontown’s entrance and the former site of Grand Circuit Raceway.

At the Magic Kingdom, of course, Toontown was swallowed up some years ago by the New Fantasyland expansion. But at Tokyo Disneyland, it is only going to get bigger and better. You can read more about what’s planned in our post, New Attractions Coming to Tokyo Disneyland & Tokyo DisneySea in 2020. 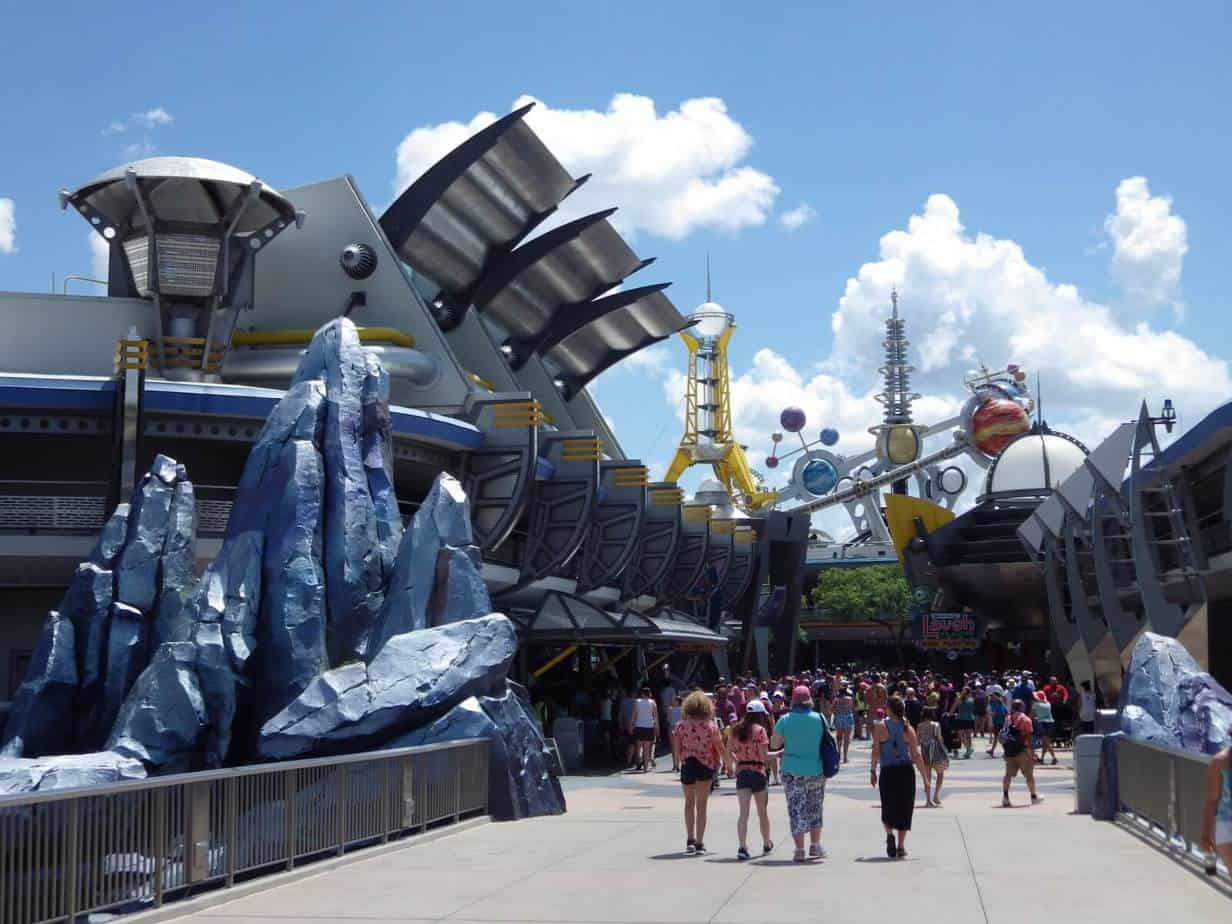 The entrance to Tomorrowland at the Magic Kingdom. 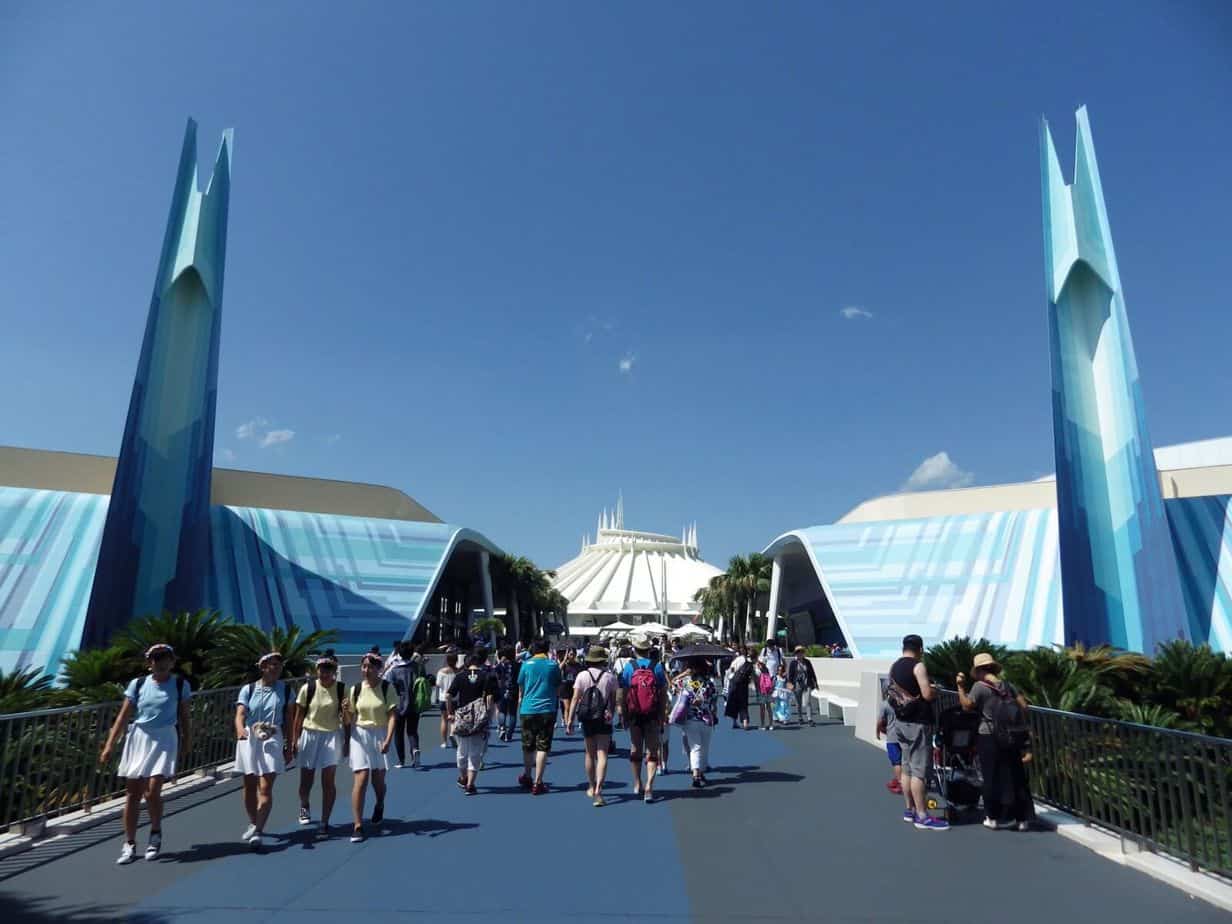 The entrance to Tomorrowland at Tokyo Disneyland.

This retro feeling comes alive right at the entrance, from the way twin spires usher you straight into the old blue-and-white color scheme of the ‘80s-era Tomorrowland at the Magic Kingdom. A key difference, however, is that there is no PeopleMover at Tokyo Disneyland, which gives the Tomorrowland here a slightly more open atmosphere.

DisneySea is a different beast, in that all of its themed ports are original. In addition to the aforementioned Arabian Coast, DisneySea also has Mediterranean Harbor, Mysterious Island, Mermaid Lagoon, Lost River Delta, Port Discovery, and American Waterfront. Some of these ports do incorporate rides from other Disney parks, which gives us a good transition into the final section of this post. 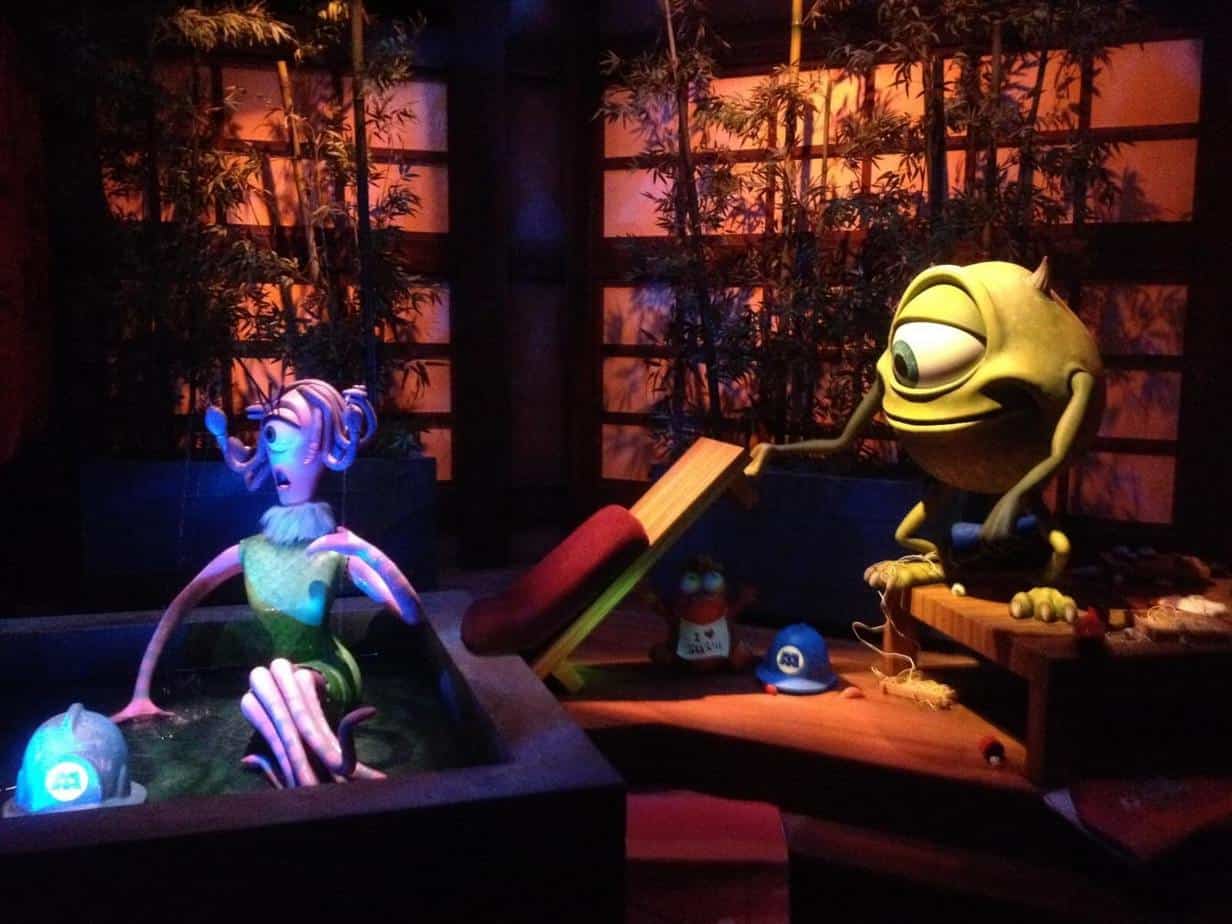 The scene with Mike and Celia at a Japanese restaurant in Monsters, Inc. Ride & Go Seek!

Again, DisneySea is a different beast, in that it lays claim to no fewer than nine original attractions. You can consult our Best Tokyo DisneySea Attractions & FastPass Guide for the full list. But these are the Fastpass rides exclusive to DisneySea: 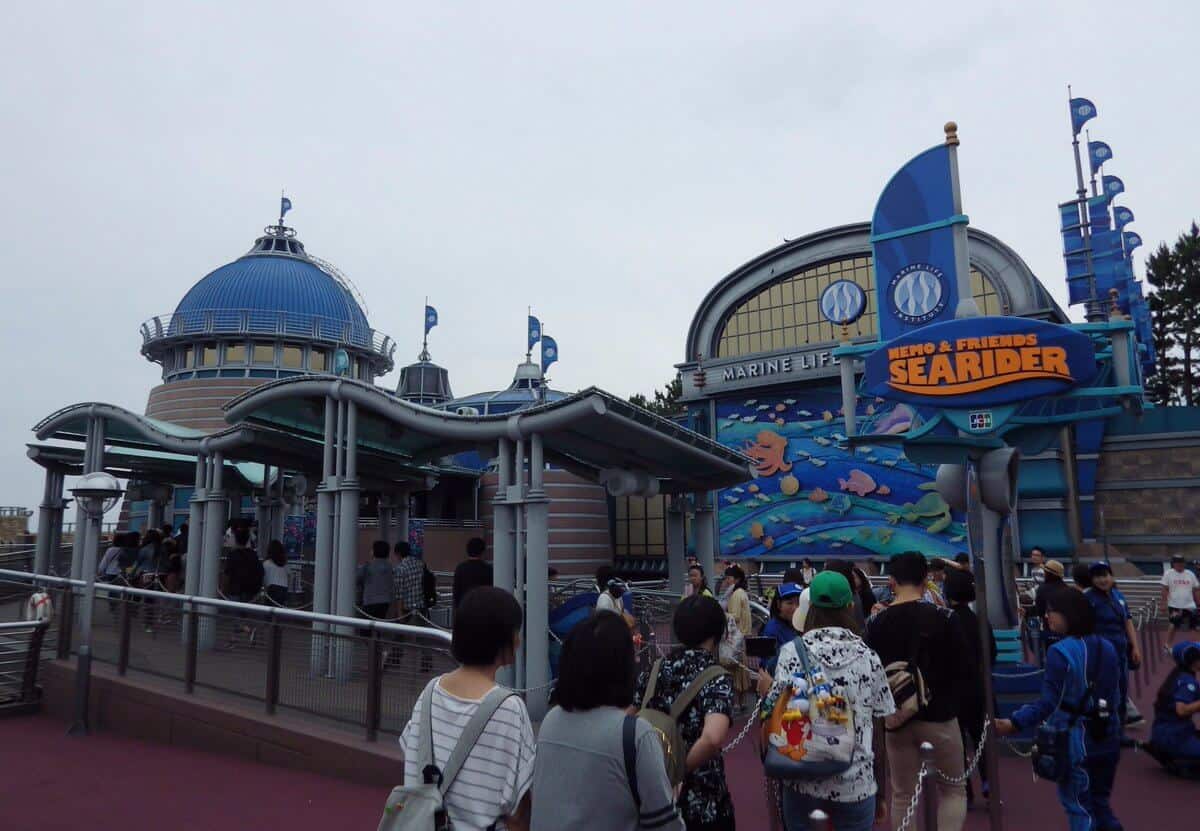 Sindbad’s Storybook Voyage is also a must. Apart from that, most parades and shows at Tokyo Disney Resort are unique as well. This includes holiday parades, stage shows, and dinner and lunchtime shows. 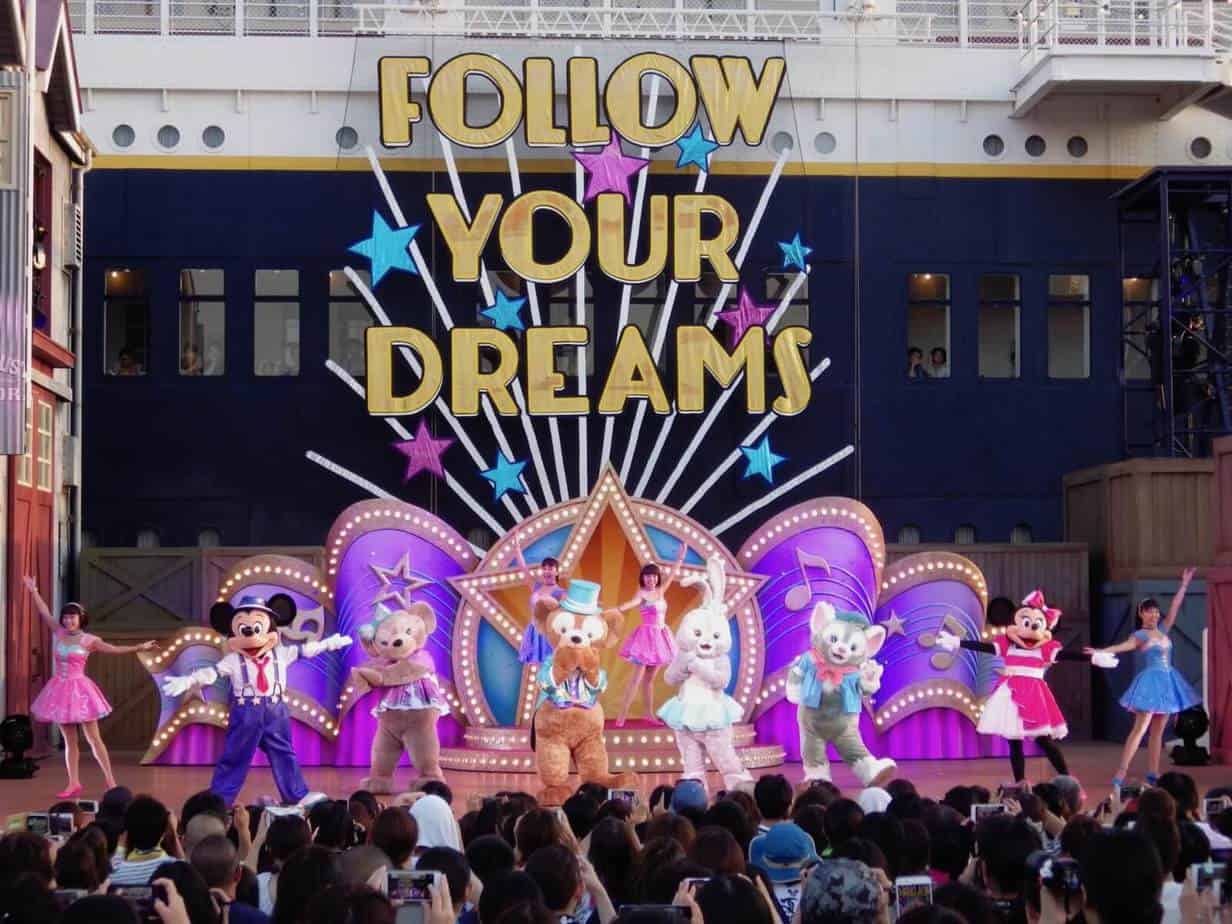 “Steps to Shine,” the newest stage show at Tokyo DisneySea.

That’s it for this post. But stay tuned to TDR Explorer for Part 2 of our series about the differences between Tokyo Disney Resort and Walt Disney World. In the next part, we will delve into:

Playing card banner image by Giovanna Paolinelli. Find her on Instagram. All photographs by this post’s author, The Gaijin Ghost. If you are on Twitter, drop him a line! And if you found this post useful, please share it with others.