If you have a trip to Tokyo on the agenda for next year, or if you have considered making a visit for the 2020 Summer Olympics, there is no better time than right now to brush up on the differences between Tokyo Disney Resort and Walt Disney World. In this special guest post, The Gaijin Ghost is back with Part 2 of our look at how two of the world’s greatest theme park resorts differ in terms of attractions and theming.

If you missed Part 1 of this two-part series, it can be found be here. Fasten your seatbelt now, and as they say on some Disney World rides, please keep your hands, arms, feet, and legs inside at all times, as we set off on the back of our flying elephants for Part 2 of this whirlwind comparison tour. The final three areas that we will cover in this post are:

Differences Between Rides Shared at Both Resorts 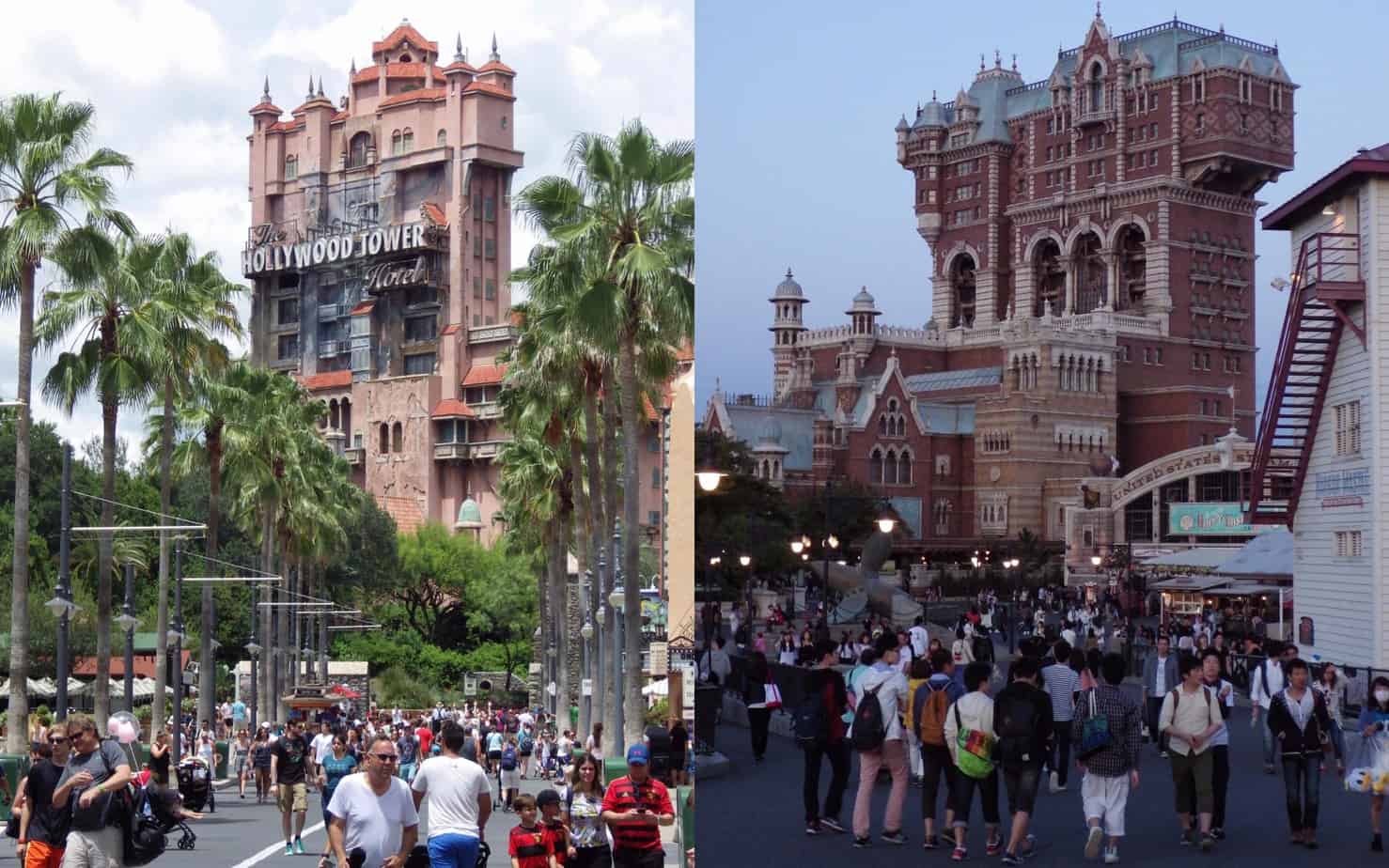 In Part 1, we talked about some of the rides original to Tokyo Disney Resort. Given what we also learned about how and why Tokyo Disney Resort developed into the resort it is, it should come as no surprise that there is some overlap between it and Walt Disney World in terms of attractions.

At Tokyo Disneyland, that overlap is actually pretty significant. Yet the rides this park reproduces from the Magic Kingdom and elsewhere often manage to stay unique by offering a different twist on well-known themes. Perhaps the coolest example of this is Tower of Terror.

While the ride building for Tower of Terror at Disney California Adventure may have been transformed this year into Guardians of the Galaxy – Mission: BREAKOUT, the sight of The Twilight Zone Tower of Terror road sign still functions as a familiar mile marker on the car approach to Walt Disney World. 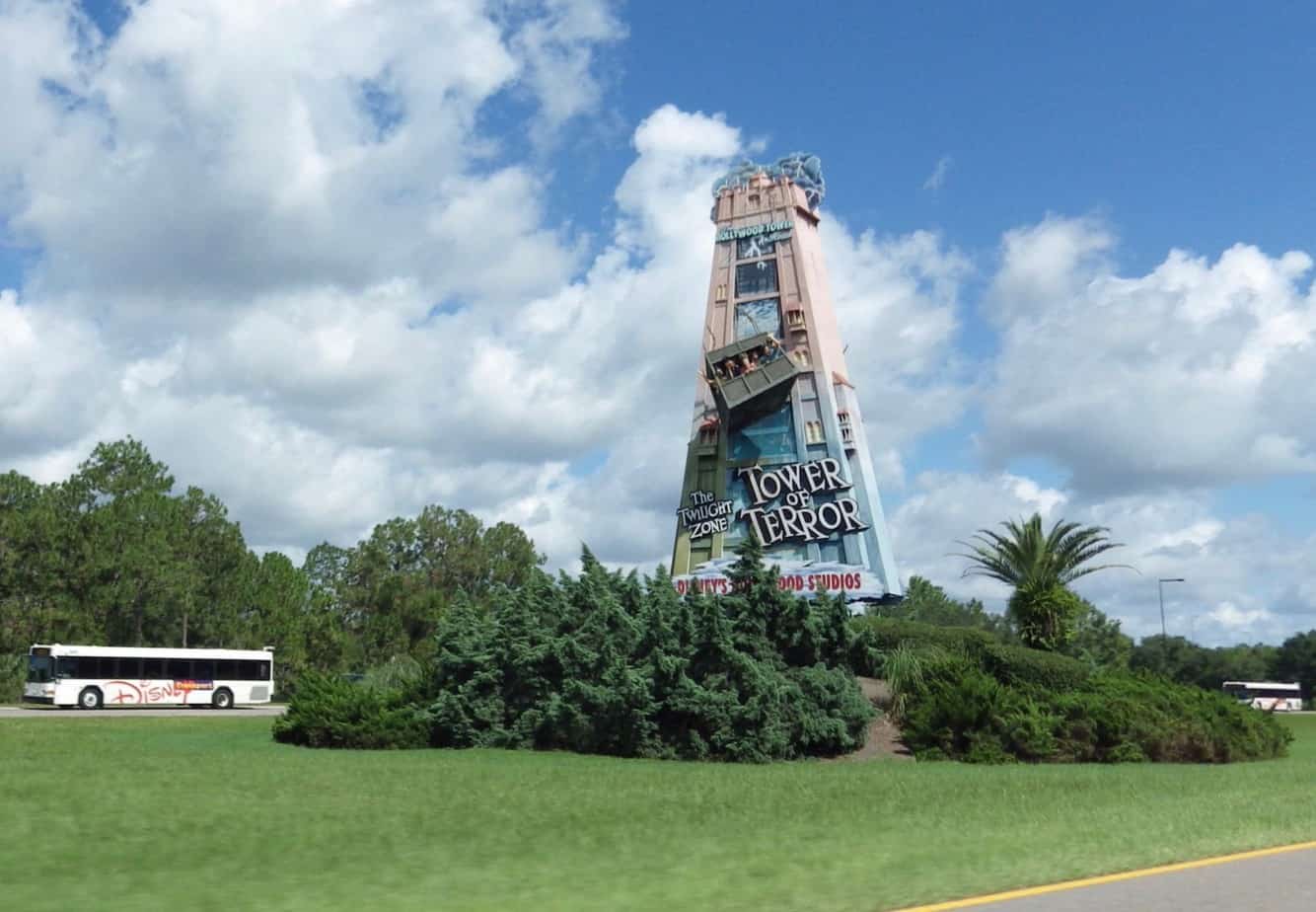 Road sign for The Twilight Zone Tower of Terror.

However, since the Japanese could never hope to be as well-acquainted with an old black-and-white American TV show like “The Twilight Zone,” the ride at Tokyo DisneySea was reimagined right from the beginning with a different storyline. As noted in this American Waterfront photo gallery, where you can see more pictures of it, the DisneySea version of Tower of Terror centers around adventurer and hotelier Harrison Hightower, who disappeared one night while taking the elevator up to his penthouse with the cursed idol Shiriki Utundu in his possession.

Though not technically a ride, another attraction that DisneySea shares with Disney’s Hollywood Studios is the nighttime show Fantasmic! This version of the show has been termed “Fantasmic 2.0,” and it holds some major differences: not the least of which is the fact that it lacks the big stage and plays out entirely on boats and barges in the middle of Mediterranean Harbor, with a different black Maleficent dragon showing up at the end to fight Sorcerer Mickey. This dragon is taller, with a longer neck that comes rising out of Snow White’s Magic Mirror in the show’s pyrotechnic-laden climax. 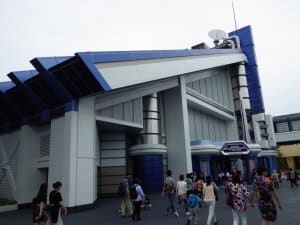 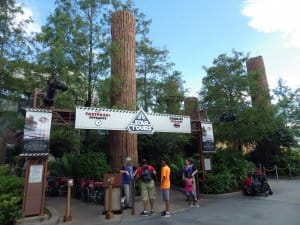 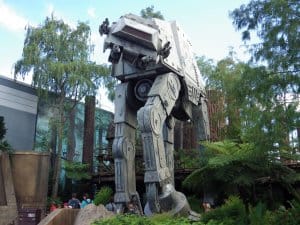 You will not see the Ewok Village and giant AT-AT Walker vehicle outside Star Tours at Tokyo Disneyland. Japan’s version of the ride has a space-hangar-like exterior, which lets it blend in more with its Tomorrowland surroundings. But if you’ve ever wondered what a Japanese C-3PO sounds like, wonder no more …

At Tokyo Disneyland, rides often sport alternate color schemes and other cosmetic differences, which can make it interesting to experience them again in the context of a different park. Two examples that come to mind are It’s a Small World and the Country Bear Theater (which is Tokyo Disneyland’s name for the Country Bear Jamboree. If you remember from Part 1, Frontierland also goes by the name of Westernland here).

It’s a Small World is another good example where the exterior of the ride is very different, more big and colorful. At the Magic Kingdom, the clock and facade of world landmarks are, of course, located above the waiting area inside the ride. 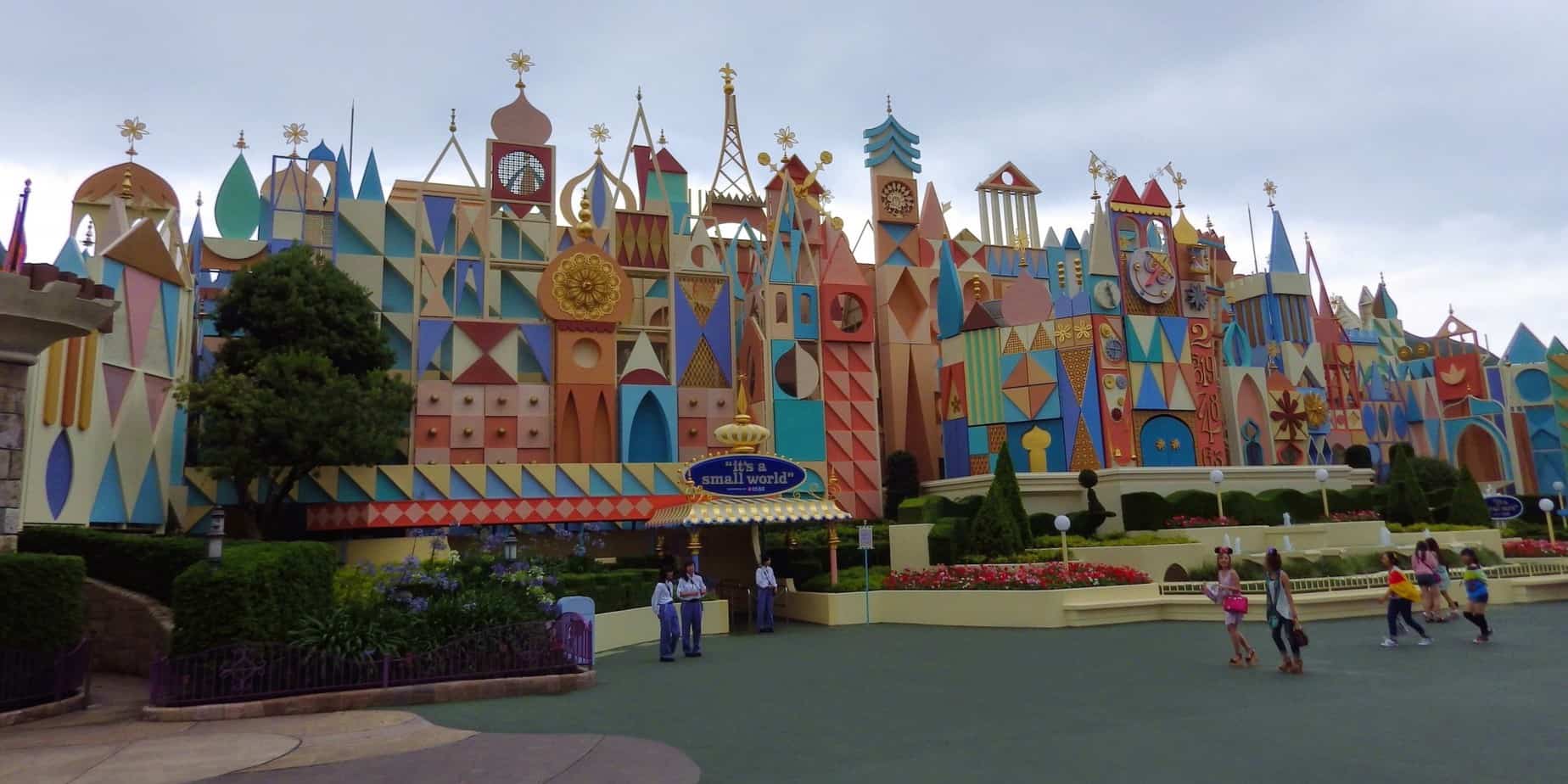 The exterior of It’s a Small World at Tokyo Disneyland. 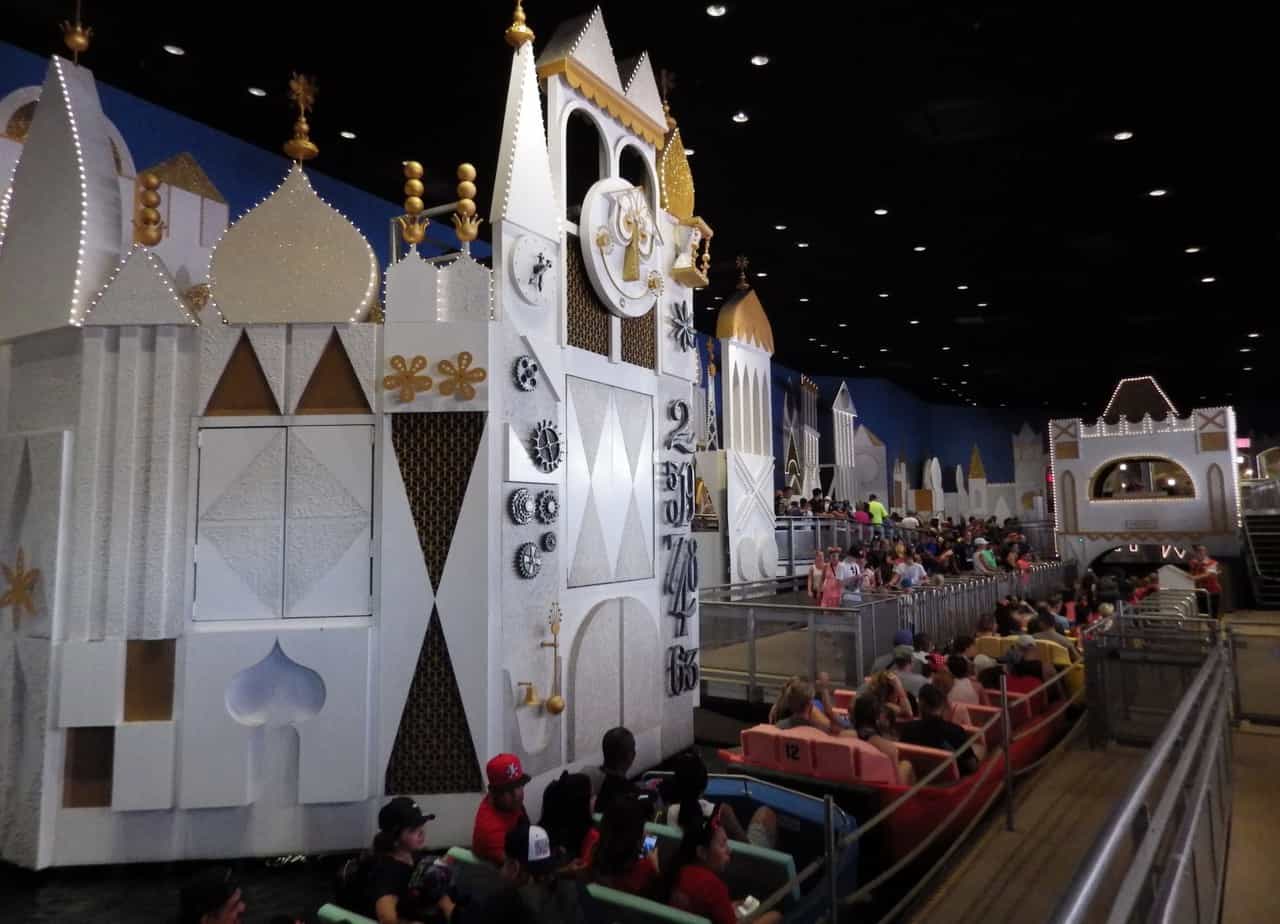 The interior of It’s a Small World at the Magic Kingdom.

For obvious reasons, many of the rides that you are used to hearing in English are going to play out in a different language at Tokyo Disney Resort, and It’s a Small World is no exception. The attraction is currently undergoing a year-long renovation, with 40 new Disney characters being added in the inimitable style of Mary Blair dolls, a la Disneyland Park’s version. But when it reopens as a Fastpass attraction in mid-April 2018 to coincide with Tokyo Disneyland’s 35th anniversary (what better reason to visit Japan?), guests can look forward once again to hearing the title song sung with Japanese verses and a chorus of “Sekai wa semai / Sekai wa onaji / Sekai wa marui tada hitotsu.”

Being immersed in a different culture, through the lens of Disney, undeniably holds a certain novelty factor. Among other things, the Japan scene in the Asia room is noticeably different between these two versions of It’s a Small World. 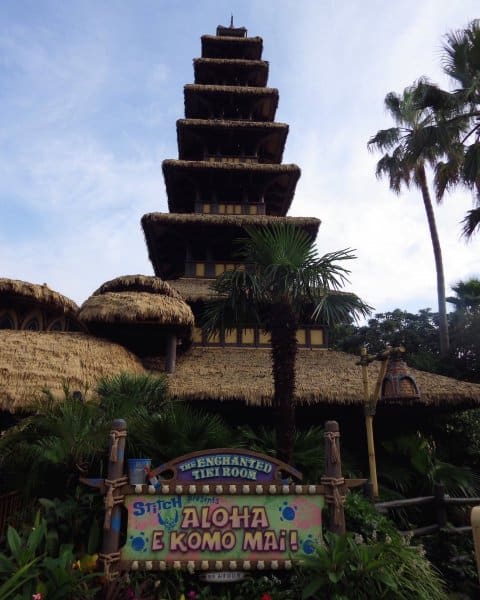 In the same way that a Moana Mercantile gift shop lends itself naturally to the theme of Disney’s Polynesian Village in Florida, Lilo & Stitch would also seem to lend itself naturally to the pseudo-Polynesian theme of The Enchanted Tiki Room. In Tokyo Disneyland’s version of the Tiki Room, Stitch plays an integral part. He is actually the Big Kahuna (or at least pretends to be). Instead of the old “Tiki, Tiki, Tiki Room” song, what you will hear in this updated version of Disney’s historic first-ever Audio-Animatronics attraction are songs like “Hawaiian Roller Coaster Ride” and “Aloha, E Komo Mai” from Stitch’s animated adventures.

While still popular in America, of course, Stitch is but one of the many Disney characters who enjoy special status in Japan, a place where loads of other huggable mascots such as Funassyi from the nearby Funabashi City are free to run wild and embody the term “big in Japan.” Chalk it up to the blue extraterrestrial’s cute, koala-like design—and the popular TV anime, Stitch!, which changed the young heroine from Lilo to a Japanese girl named Yuna, and which also changed the story’s setting from Hawaii to a fictional island near Okinawa. At Tokyo DisneySea, Stitch even pops up wearing a turban in Arabian Coast.

Depending on your mileage as a globe-hopping theme park adventurer, there are many rides at Tokyo Disney Resort that could be considered “new,” in both the sense that they are new to you, the first-time rider, and/or still relatively new to the park-going public. While an Epcot fan might associate the idea of a Nemo attraction with that park’s ride, The Seas with Nemo & Friends, this last spring saw the opening of a new ride called Nemo & Friends SeaRider at Tokyo DisneySea. These two rides are very different, with SeaRider putting you in a submarine, shrinking you down to the size of a fish, and using a motion simulator to give you an underwater adventure. 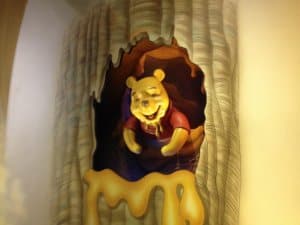 The Many Adventures of Winnie the Pooh at the Magic Kingdom 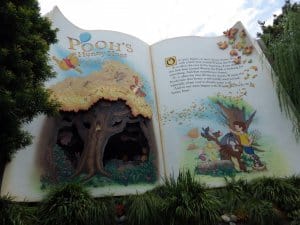 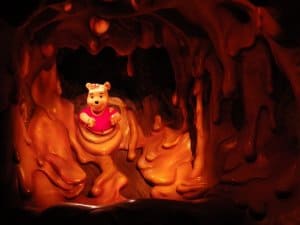 While Pooh’s Hunny Hunt hits a lot of the same story beats as The Many Adventures of Winnie the Pooh at the Magic Kingdom, it uses a different ride technology to give you a unique trackless spin through the Hundred Acre Wood and other settings. Tokyo Disneyland’s teacup ride may go by the slightly less “mad” name of Alice’s Tea Party, but Pooh’s Hunny Hunt imports more than enough psychedelic madness into its similarly dizzying Heffalumps and Woozles room.

Whereas Monsters, Inc. Laugh Floor at the Magic Kingdom utilizes digital puppetry to put on a comedy show (similar to the Japanese-language Stitch Encounter at Tokyo Disneyland), Monsters Inc. Ride & Go Seek lets you play flashlight tag on a dark ride that sweeps you past some impressive animatronics. 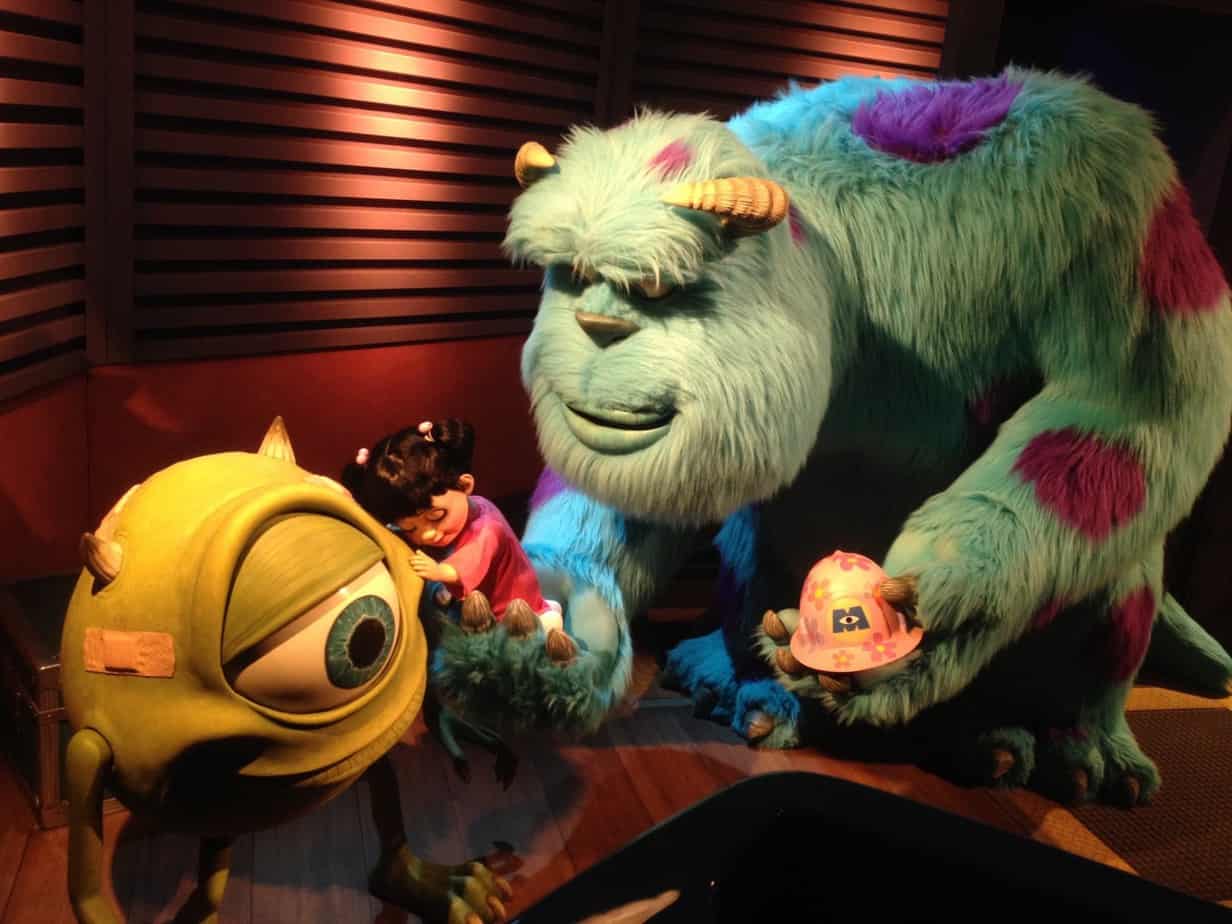 Tokyo Disneyland also has its own exclusive Big Hero 6 ride and an all-new Beauty and the Beast ride coming in 2020.

If the Magic Kingdom is your home park and you do not make it out to California much to visit the Disneyland there, then rides like Pinocchio’s Daring Journey and Roger Rabbit’s Car Toon Spin might also be new to you. The same rule applies to the Haunted Mansion Holiday Nightmare. This seasonal version of the ride, which runs from early September to late December, is not available at the Magic Kingdom. 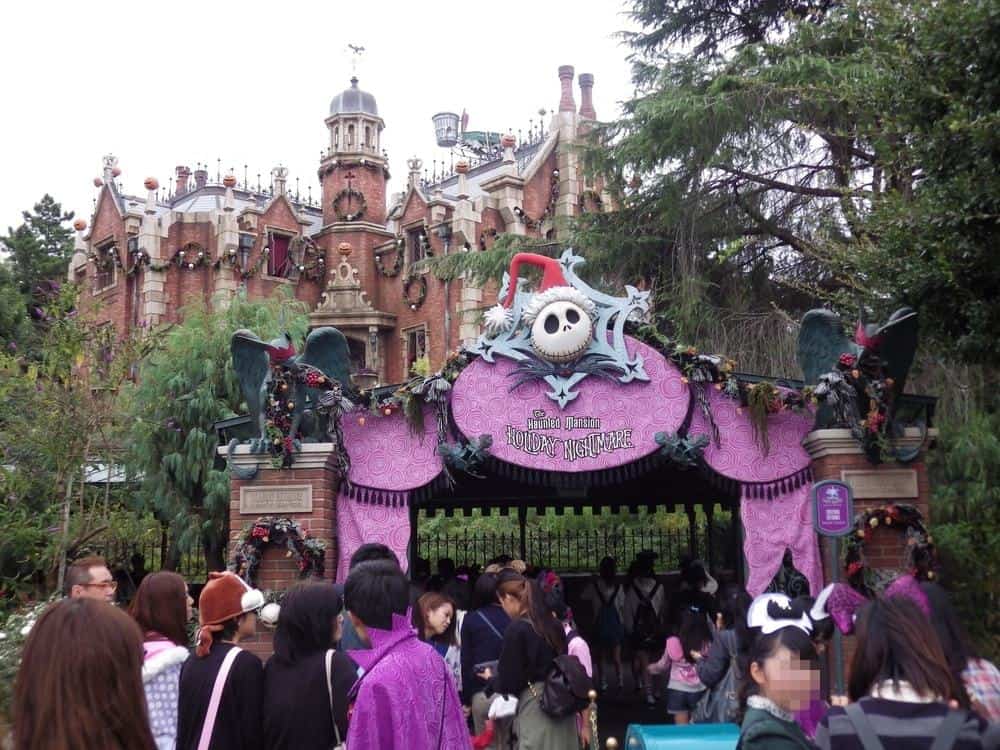 In October, we bid farewell to StarJets, as the world’s last remaining version of the ride closed at Tokyo Disneyland. The old USA rocket with red-and-white space shuttles revolving around it had persisted here for years, long after the Magic Kingdom replaced it with Astro Orbiter.

If you are the nostalgic type, as kids at heart tend to be, then another unique selling point Japanese theme parks might hold for you is that they are sometimes the last place in the world to showcase certain classic rides. This is the upside of Japan straight-up copying or cloning elements from theme parks in Florida, and it is by no means limited to Disney. Now that Terminator 2 3-D: Battle Across Time has closed at Universal Studios Florida, the only place where fans can experience that attraction, anywhere in the world, is at Universal Studios Japan. The same was true of Back to the Future: The Ride before it finally closed at Universal Studios Japan in 2016. 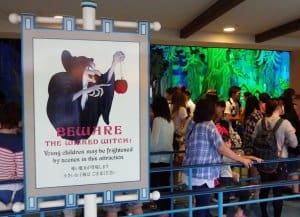 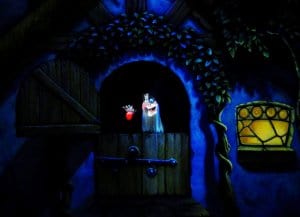 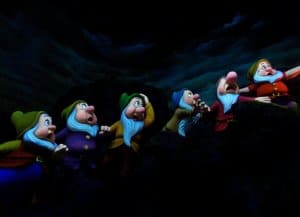 For its part, Tokyo Disneyland still has Snow White’s Adventures, which has long since closed at the Magic Kingdom. To say nothing of Disney’s Electrical Parade. As of this writing, the only park in the world where you can experience that parade is Tokyo Disneyland. Everywhere else, it has closed. Next time you get dispirited about your favorite attraction shutting down at Walt Disney World or Universal Orlando, there is always the chance that its long-lost Japanese twin may live on for a while longer. 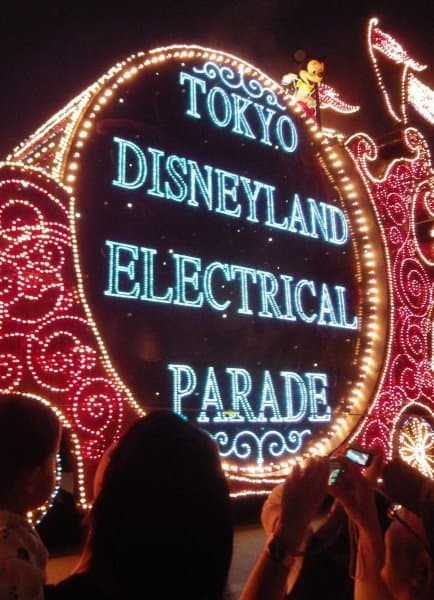 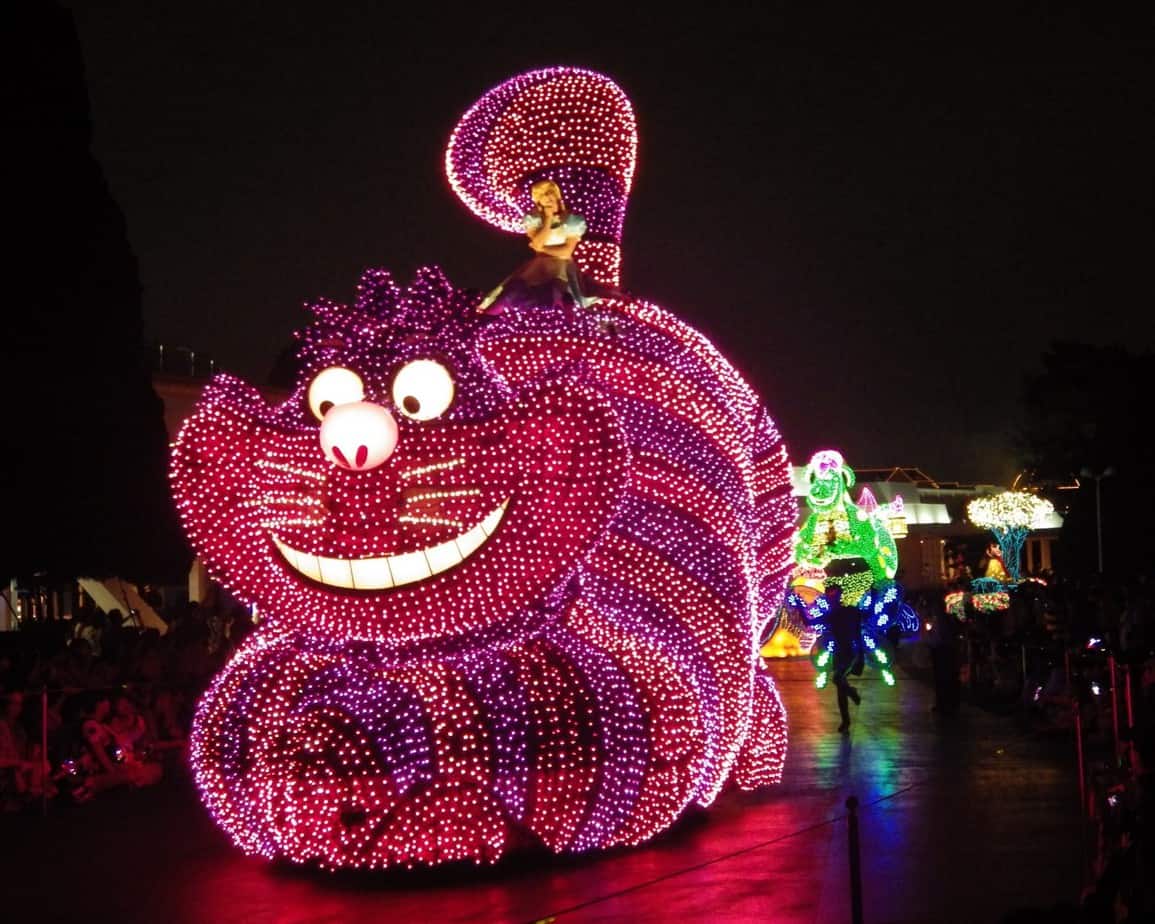 On a related note, we could probably write another whole post on the culture of kawaii at Tokyo Disney Resort: talking about how forgotten and lesser-known characters like Chip ’n’ Dale’s girlfriend, Clarice, Thumper and Miss Bunny from Bambi, Marie and the other two kittens from The Aristocrats, Bernard and Bianca from The Rescuers, and Stitch’s girlfriend Angel maintain visibility in character greetings and shows here on the other side of the world. Duffy the Disney Bear and Friends continue to have a growing presence at Tokyo DisneySea. 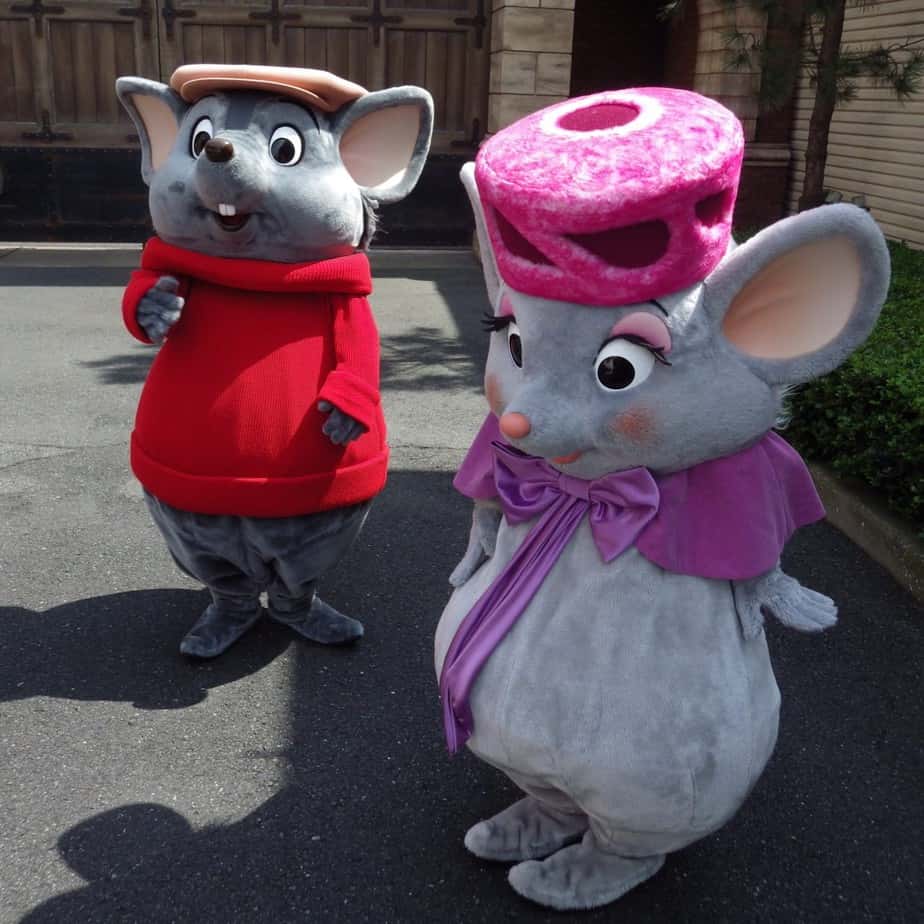 Bernard and Bianca from The Rescuers at Tokyo DisneySea.

Perhaps it is enough to say that Tokyo Disneyland and Tokyo DisneySea inhabit their own special realm in the worldwide wonderland of Disney parks. If you love the parks and enjoyed this glimpse “through the looking glass” of Walt Disney World, please share this post and Part 1 of the series with others. For the author and his beat-up old camera, it was the culmination of three years worth of trips to Tokyo Disney Resort, as well as one recent summer trip and a childhood full of family trips to Walt Disney World.

Special thanks go out again to Giovanna Paolinelli for her design of the playing card banner image for this post. Show her and TDR Explorer some love on Instagram, and show her, TDR Explorer, and The Gaijin Ghost some love on Twitter. (Seriously, it’s always nice to hear from people, and it gives us the motivation to create more content like this if we know that you like it). 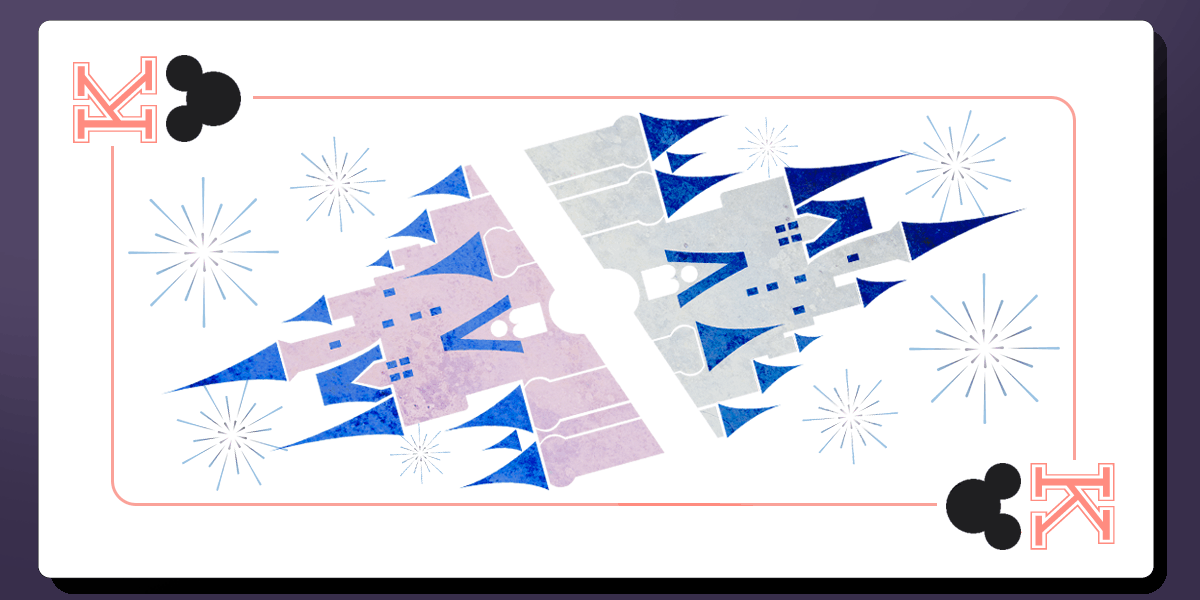