I was going to write this part of the trip report but Duffy had so much fun writing the day before. So I decided I’ll let him write them for the rest of the trip. He did ask me that I include some music again so you have a soundtrack to listen to while reading.

After a magical first day I could only imagine what our second day would bring! Little did my two best friends Chris and Chris know I was wide awake at 6am waiting for them to wake up. I was too excited to sleep. Finally they both woke up around 7am and got ready for the day. I asked Chris One what we were going to do for Breakfast and he said we were going to eat in the park! I was ever so excited for this.

We arrived at the park just before 8am and we were waiting with everyone on Main Street. I was very hungry by this point and wanted nothing more than to eat. Chris One and Chris Two wanted to ride Space Mountain before breakfast, so of course I went along for the ride. It did get my heart pumping for the day! 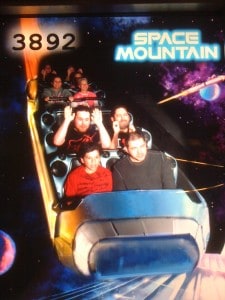 After we headed back to Main Street and got a table at the Carnation Cafe (we got there before it got super busy). Chris One ordered the Mickey Waffle with whipped cream and strawberries. He was kind enough to share it with me, it was delicious! I am a bit worried as to why they would make one of my best friends into a waffle, either way it was tasty! 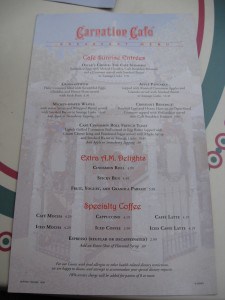 I know what I'm having! 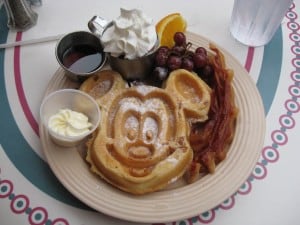 We went on Pirates of the Caribbean and Haunted Mansion after breakfast. Taking it easy so we don’t upset our stomachs after such a great breakfast. Also at least with these two rides I can sit beside my friends and actually see things! Unlike Space Mountain.

Once 10am rolled around we all headed over to California Adventure. The first thing we did was grab fast passes for Soarin’. By the time we got there shortly after 10 the line up was already at 30 minutes! I heard Chris One and Chris Two talking about something called California Screamin’ and how they were nervous to ride it. Well they are braver than I am that’s for sure! That was the next ride we all went on. I really didn’t have a choice in the matter, but I got to ride in Chris One’s backpack so I didn’t get to see much. It did sound like a lot of fun and from the photo they took it sure looked fun too. 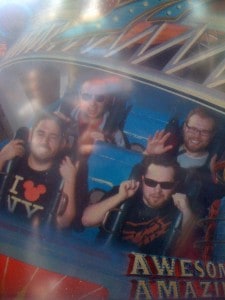 Next up was Toy Story Mania. Now, this had to be one of my favorite rides, why do you ask? It was because I got to wear these stylish glasses and shoot at other toys! 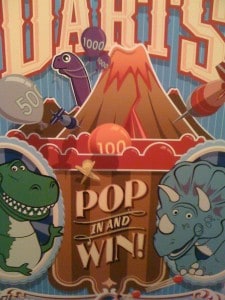 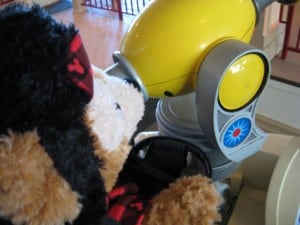 Shooting at other toys, don't get to do that often 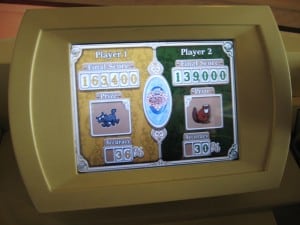 Chris One won this time! 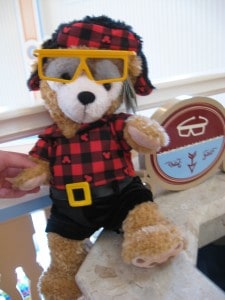 Showing off my stylish glasses, although I was a bit dizzy.

After that they wanted to head to Grizzly River Run. I’m not a fan of getting wet so I asked Chris One if I could ride this one in the backpack. From inside the backpack I heard everyone on the raft singing happy birthday half way through the ride. There were two other people celebrating their birthdays along with Chris Two. So they all ended up singing Happy Birthday while going down the river. The singing was replaced with screaming when I heard the water splash all over everyone and I was nice and dry in the backpack.

Both Chris’ got rather wet. I couldn’t help but to snicker to myself as I was bone dry! Once we were done it was time for Soarin’. Sadly I didn’t get to see anything, but it did sound like a lot of fun!

Now it was lunch time! Cocina Cucamonga Mexican Grill was on the menu for lunch today. Chris One had chicken tacos while Chris Two had something that was in a corn husk. I shared a little bit of the tacos and then I enjoyed myself in the nice warm California sun while I wanted for the two to finish eating. 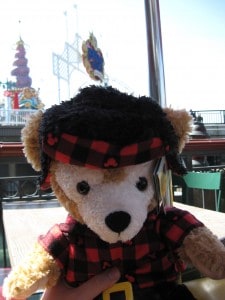 Enjoy the sun during lunch! 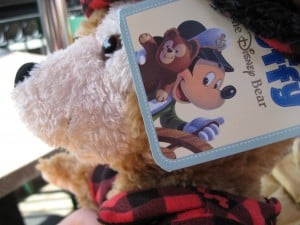 Looking out into Paradise Pier

It was mid afternoon and we were all pretty tired. We decided that having a nap at the hotel was in order. We were up pretty early and wanted to last until the parks closed! 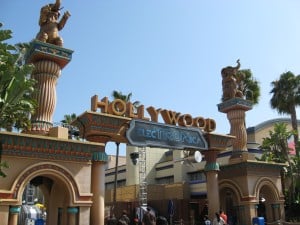 After a quick 1.5 hour nap we headed back to California Adventure to check out the Aladdin Musical. It was very well done and I enjoyed the improv the Genie did with his dialog. Although I didn’t quite understand what a Charlie Sheen was and how it was winning. That was lost on me. Although both of the Chris’ found it to be quite hilarious. Did like the part where Genie referenced Angry Birds when he flicked Iago away, I’ve seen people playing that game on their fancy iPads and iPhones. 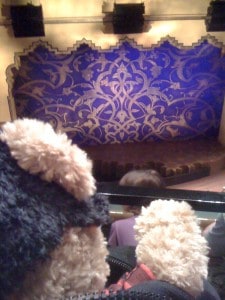 I can't wait to see Aladdin!

We then headed to Monster’s Inc. to check it out. I enjoyed it very much, it being one of my favorite Pixar films! Then it was time for supper. We decided on Taste Pilots’ Grill. I shared some of the burgers and fries they both ordered. I was bugging Chris One to get a World of Color cup but he didn’t want to. 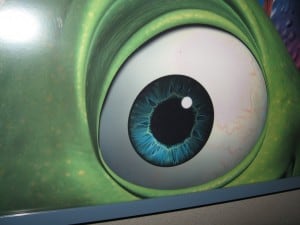 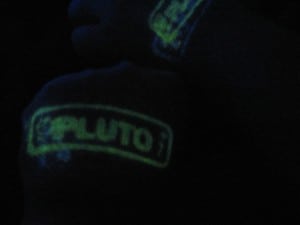 Chris One and Chris Two stamps glowing. I didn't get one cause it doesn't come out of my fur.

We took some audio during elecTRONica, so you can listen to it while reading! If you’re listening to music already make sure you pause it, you don’t want to miss this! Also be mindful of the volume of your speakers, this may be LOUD! It was very loud there so I expect the recording to be just as loud!

Once supper was done we waited to enter The Grid. After about 10mins elecTRONica started. I must say it was rather interesting how they changed Hollywood Pictures Backlot into The Grid! Both Chris’ decided they wanted to get some beverages, I’m not allowed to since I’m not 21. Then we entered into the End Of Line club and listened to some good house music! After some grooving we watched Laserman perform his crazy performance with the lasers. Also checked out Flynn’s Arcade, it looked like it was right out of the movie. Even had 80s music blasting from the speakers, this is what Chris One told me. He said there were some artists playing called Micheal Jackson and Madonna. I haven’t heard of them before but they sound like fun people! 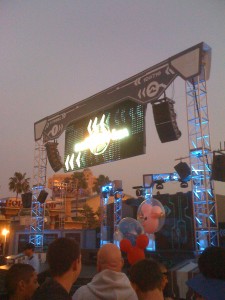 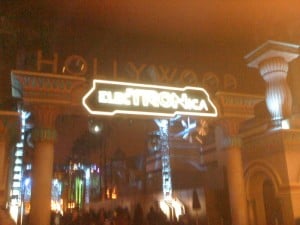 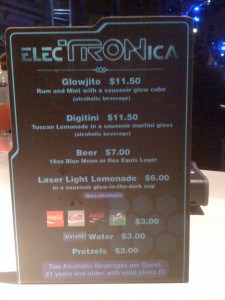 I didn't get any fancy drinks, I'm not allowed. 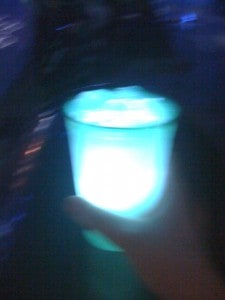 Chris One, are you sure you want to drink that? 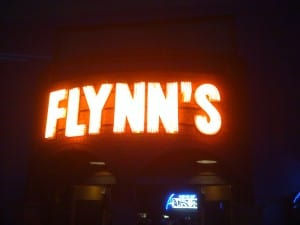 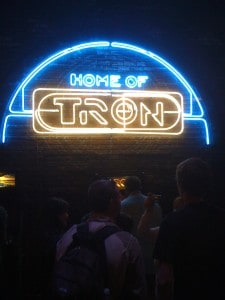 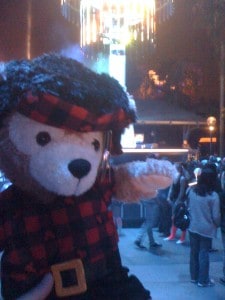 Partying it up, TRON style. I'm grooving to the music. 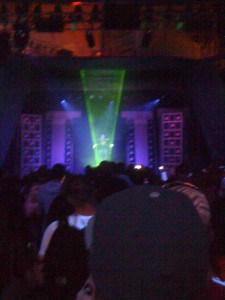 After being converted back to our normal forms from Programs we headed back to Disneyland to try and catch Fantasmic! Sadly we got there a bit too late and the show was half over. I don’t think we read the times right or something. Either way we didn’t let this get us down! We rode Pirates, Haunted Mansion, and Big Thunder Mountain during the fireworks! Thankfully the lines weren’t very long since most people were watching the Fireworks.

It was a fantastic day and I’m excited to share with you our last day in the parks. So please come back soon and read it!

Your Bestfriend
Duffy the Disney Bear