Tuesday, October 10, 2017, marked the last flight of the StarJets at Tokyo Disneyland.

Way back in 1994, the Magic Kingdom replaced this ride with the metallic Astro Orbiter as part of its New Tomorrowland redesign. But for years, the classic version of the ride has persisted at Tokyo Disneyland, where Tomorrowland still exists as a place with retro blue spires at the entrance.

At Tokyo Disneyland, the walkway between those spires leads straight down to Space Mountain, but if you turned left, you would eventually see the sight of the old USA rocket with red-and-white space shuttles revolving around it. That was StarJets. As Wikipedia notes, despite the fact that Tokyo Disneyland does not have a PeopleMover attraction like the Magic Kingdom, they even integrated StarJets into the landscape a similar way, building it atop an elevated platform with a view looking out over Tomorrowland. 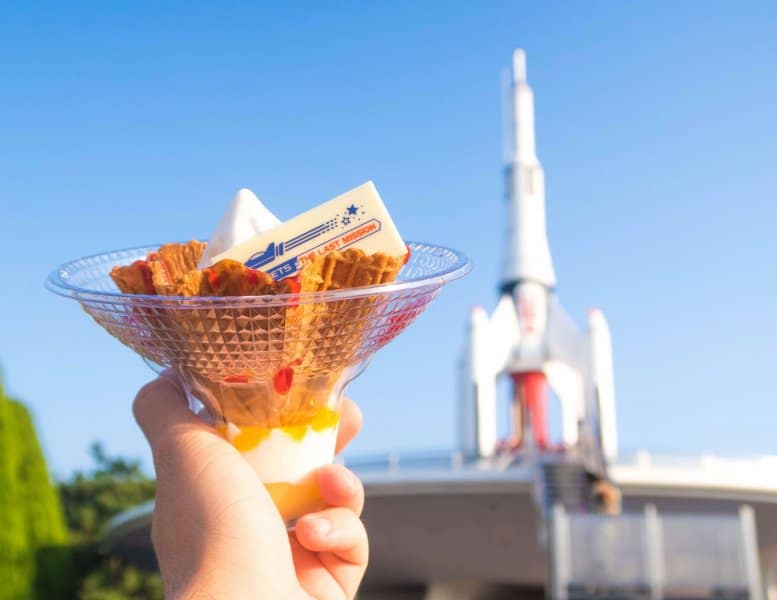 Space Sundae which was available during StarJets: The Final Mission

For 34 years, that platform served as the boundary between Tomorrowland and Fantasyland at Tokyo Disneyland. Now, however, the face of Tokyo’s Tomorrowland is changing, as Fantasyland is in the middle of a major expansion, parts of which have already begun to eat up space in Tomorrowland.

Back in January, cars ran their final lap around the Grand Circuit Raceway, and now the plot of land where that attraction once stood has its perimeter staked off with a blue construction wall that reads, “Magic is Happening.” Like Grand Circuit Raceway and StormRider before it, StarJets has inspired its own line of farewell merchandise, such as commemorative pins and file folders that read, “StarJets Forever!” 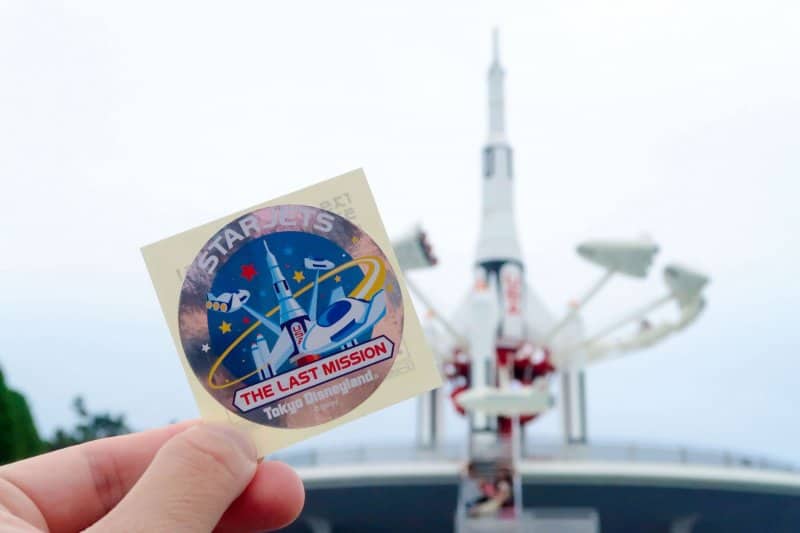 In its final days, the attraction drew long lines, as enthusiastic parkgoers clamoured for a chance to take part in “StarJets – The Last Mission.” Much like Grand Circuit Raceway awarded Final Lap Driver’s Certificates, Disney Cast Members were on hand outside StarJets, giving out “Last Mission” stickers as souvenirs.

The backstory for StarJets, according to the Tokyo Disney Resort website, is that it was actually an experimental flight centre, designed to run test flights for volunteer pilots. Now the test flights are over, and StarJets is taking off into outer space.

This attraction has been with Tokyo Disneyland since its opening day, so its closure is sure to bring back bittersweet memories for a lot of people. In addition to anchoring the skyline of Tomorrowland for a whole generation of Japanese parkgoers, StarJets has long provided a callback to the days of yesteryear at the Magic Kingdom in Florida. In that respect, the disappearance of this landmark from Tomorrowland’s skyline is not just the end of an era for Tokyo Disneyland. It is the end of an era for Disney parks worldwide.

As StarJets joins the ranks of retired rides, it will forever hold a place in Disney history. All that remains to be said is StarJets Forever!

If you are a fan of classic Disney attractions, please share this article with others. And if you are on Twitter and you want to share your own StarJets memories, drop @TheGaijinGhost a line! As always, you can also hit up @tdrexplorer, or wax nostalgic in the comments section below.