Anna and Elsa have made their return for another winter season at Tokyo Disneyland. This year brings a full parade, new merchandise, and even cuter snacks (who knew that was possible). We were lucky enough to see the “preview” of the event a day before it started! Here’s our trip report of our experience with Anna and Elsa’s Frozen Fantasy at Tokyo Disneyland.

Sometimes a day before an event begins the resort will run the shows. The show times are not posted but are announced in the parks. You just have to be lucky. I just happened to decide to head to the park this day, without knowing previews would occur. My plan for the day was to check out the merchandise and eat all the food (because that is what I do).

Before arriving to the park, I browsed the #TDR_now hashtag on Twitter and noticed people posting the times of the previews for the shows at Tokyo Disneyland and for the new show at Tokyo DisneySea (Come Join Your Friends). Which made me ecstatic! As a side note if you ever want to know what’s happening right now at the resort, look up the hashtag #TDR_now on Twitter, people are constantly posting relevant information. Just be aware that it’s mostly in Japanese.

Alright, let’s talk about the entertainment! 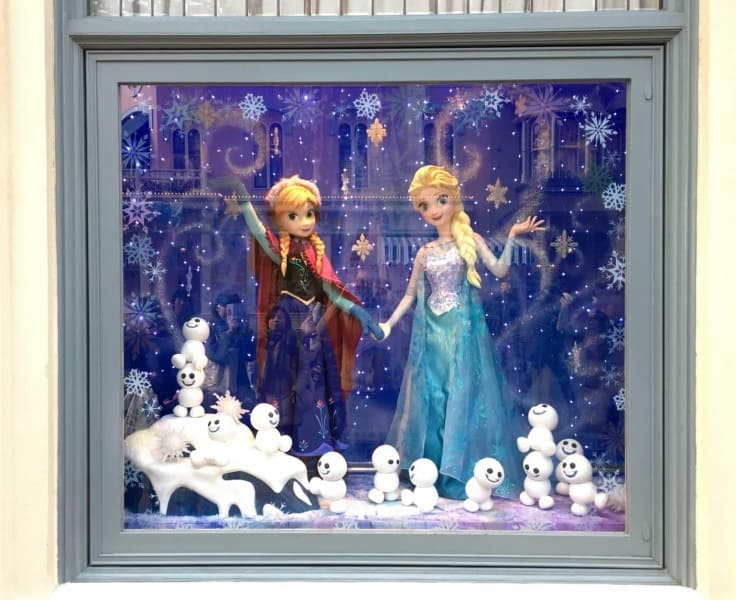 This is the first time for a full fledged parade. Last year all that was offered was a greeting in the form of a short parade, which was OK but nothing mind blowing. Well, this year they blew it out of the water. Not only did they create a full parade but added multiple characters too! Not to mention the impeccable costumes worn by the dancers and well thought out floats. Characters added this year include:

I will be honest, I was expecting a short parade with maybe a couple added floats. I’m glad to admit that I was completely wrong. While they did reuse costumes from last year (which makes sense), there were more new costumes than “old”. The detail and thought put into these costumes is up to the standard that Tokyo Disney Resort is well-known for, and that fills me joy. The addition of various characters made this parade standout. The Snowgies are adorable and including a villain in the parade was a smart choice. Hans is the most stand out character in that entire parade, you’ll have to see the video below to see exactly what I’m talking about. If you cannot see the video below check it out on YouTube or Facebook.

In typical Tokyo Disney fashion, there is a show stop. Meaning the parade pauses along the route a few times and perform various dances which the audience may participate in. While I am over hearing “Let it Go” for the millionth time, I did not mind it during the parade. Perhaps the reasoning is, I was too busy looking at the detail of all the costumes and floats. Overall this show is a pleasant surprise and easily the best part of the event. I’m a huge fan of parades and shows, so take that how you will.

In front of Cinderella Castle is a short, but sweet, greeting with Anna and Elsa. They arrive at the castle atop their float that comes from Toontown. They do a song and dance with children dressed up as Anna or Elsa. While it is enjoyable for children, if you are an adult it is just OK. You are better off watching the parade. Not to say that it is bad, it is simply meant for a younger audience. If you happen to be in the area when it’s on, it’s worth pausing to watch.

While keeping the previous years decorations, they added a few noteworthy items and alterations. The entrance to the park has the same display, which is still beautiful. Over in the World Bazaar, the gigantic crystal makes a return with a slight change. At random intervals the pillars and crystal sparkle with charming sound effects. An elegant addition to the area. 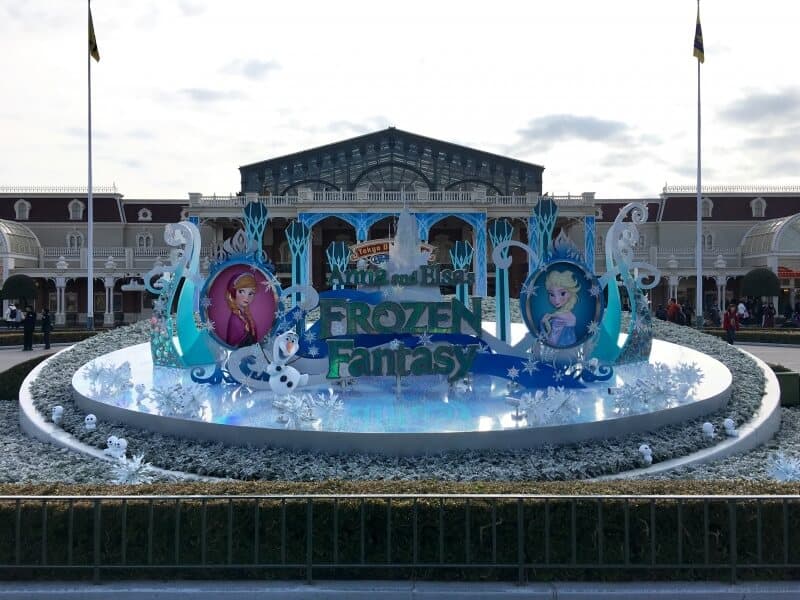 Anna and Elsa’s Frozen Fantasy Display at the entrance to the park! 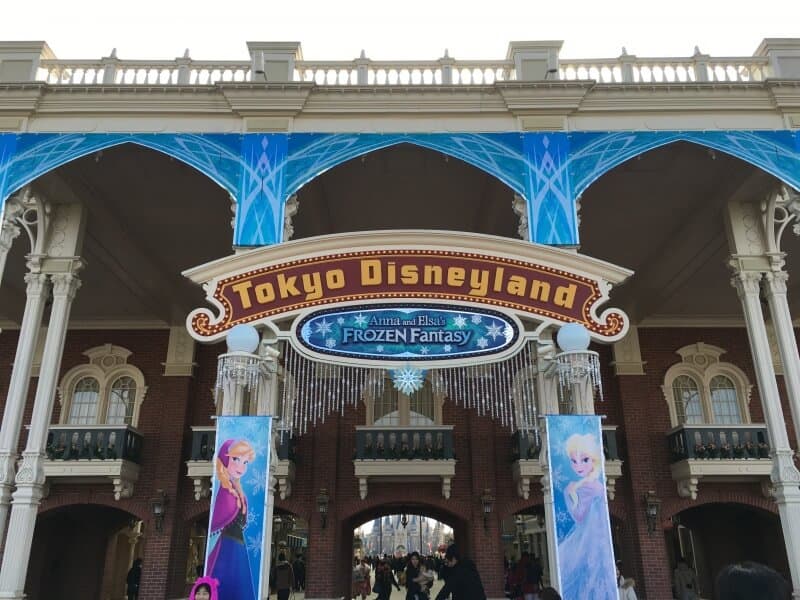 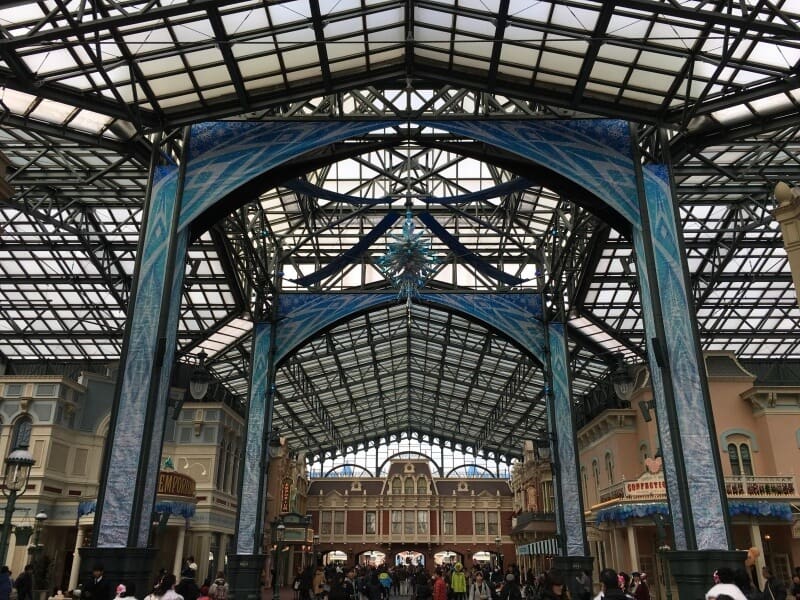 Middle of the World Bazaar

For the first time this year, displays are in the hub area. Olaf and his throne of Snowgies, Sven and his sleigh, and finally the Trolls. The throne of Snowgies is my favourite and the most ridiculously creative one. Throughout the park are hidden Snowgies, which are fun to seek out. During my day I found some in Adventureland, Westernland, and Tomorrowland.

He was counting the Snowgies then he noticed me filming him. He got camera shy! ? #TDR_now pic.twitter.com/sAnyrHix34 — TDR Explorer (@tdrexplorer) January 11, 2016 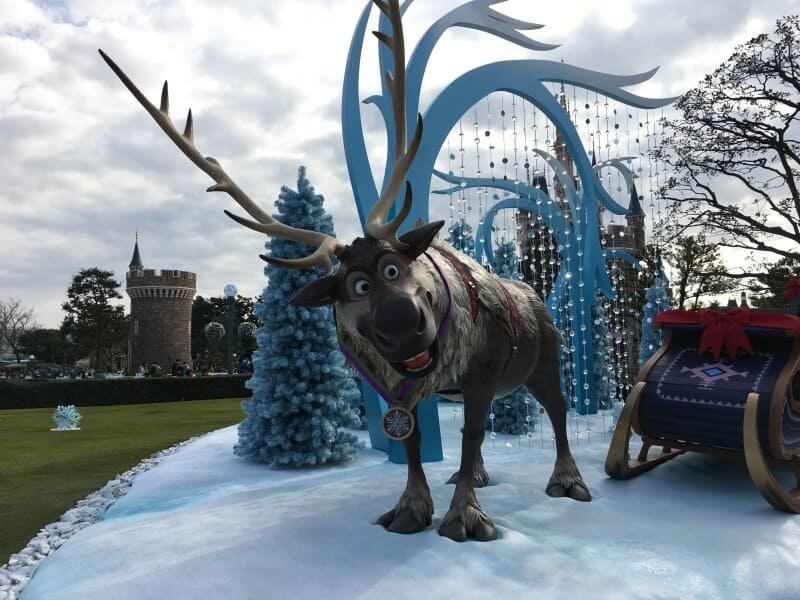 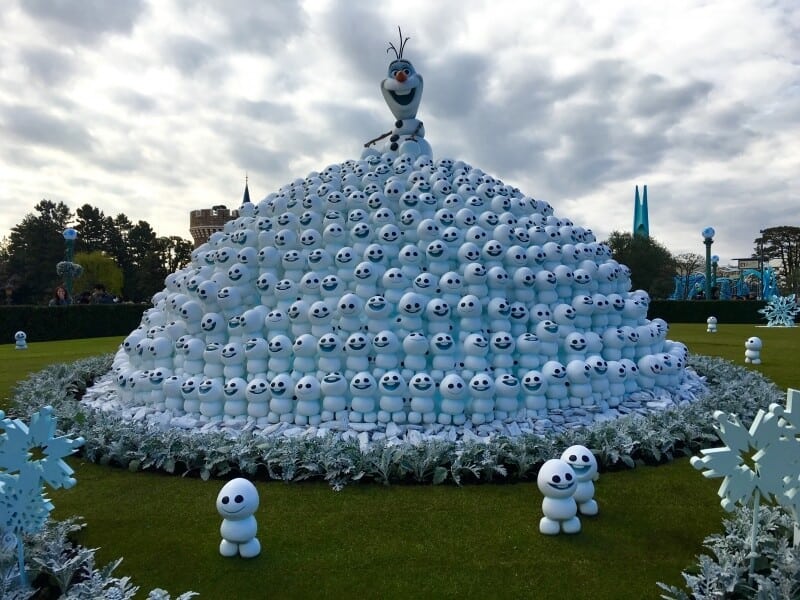 Olaf and his mountain (or throne) of Snowgies! 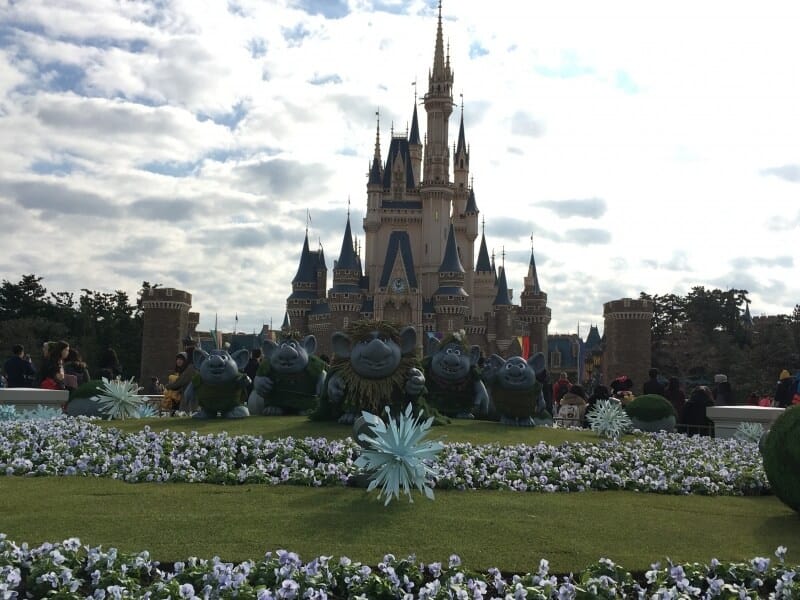 The decorations this year are top notch and a welcomed change from last year. I would say the decorations in the World Bazaar and the entrance to the park are best in the evening. The beautiful blue lights enhance the detail significantly, which makes for perfect photo opportunities for you photographers out there!

As with any seasonal event at the resort there are tons of food options ranging from snacks to full meals. During my visit I sampled a few of the snacks (I plan on trying more next time). The most notable is the Snowgie Steamed bun which, you can see from the photo below, is too adorable for words. It is essentially 4 miniature steamed buns put together to form a Snowgie, each with a different flavoured filling (Meat sauce, salmon cream, purple sweet potato cream, and strawberry cream). I enjoyed all the flavours, but my favourite was the sweet potato. I highly recommend giving this one a try. It is available at Boiler Room Bites in Adventureland. 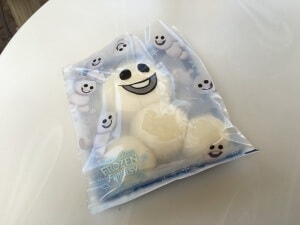 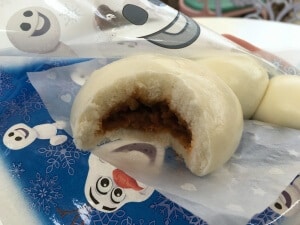 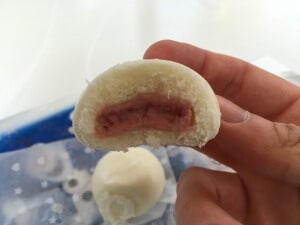 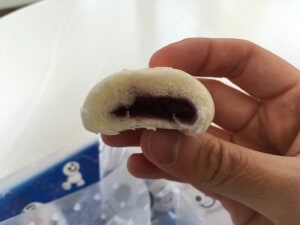 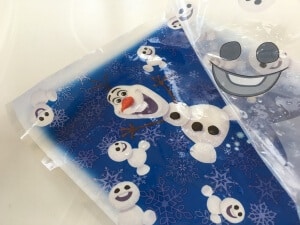 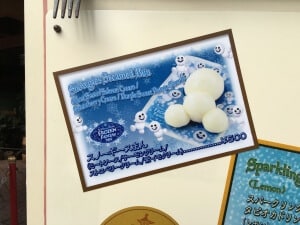 Next was the Snowgie Donut (the actual name is Baked Chocolate Donut but I like my name better) which is not as cute as the steamed bun, but it tastes like a light chocolate cake instead of a donut. The print on the glaze is remarkable and well detailed. This is available at the Sweetheart Cafe or Event Booths in the hub. 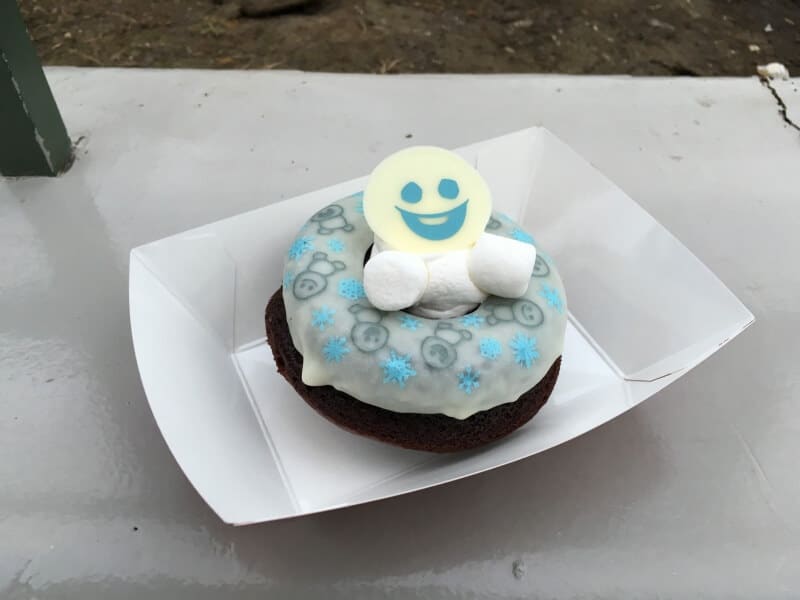 Full list of food for Anna and Elsa’s Frozen Fantasy

We did skip the winter version of Once Upon A Time, which we plan on seeing next time. Overall this is a vast improvement over last year. The parade is the best part and I highly recommend it to everyone. Even if you are not a huge fan of Frozen, you can appreciate the detail that went into crafting the costumes and floats.

If I were to give this a rating, I would say 4 acorns out of 5. You’re probably asking “why acorns”? I decided this year I am implementing a new rating system that uses acorns instead of stars. Simply because I am a huge fan of Chip N Dale, they are my spirit animals. Oddly enough one of the kanji characters in my name in Japanese, means “chestnut”. Which is 栗 (coo-ri). Acorns are close enough to chestnuts right?

Hope you enjoyed a trip report to Anna and Elsa’s Frozen Fantasy at Tokyo Disneyland. Which is running Jan 12 until March 18, 2016.