Sindbad’s Storybook Voyage is an attraction in the port of Arabian Coast at Tokyo DisneySea. For newcomers to DisneySea, this 13-minute boat ride based on “The Seven Voyages of Sinbad the Sailor” from Arabian Nights, might be one of the park’s best-kept secrets. Disney Tourist Blog has even suggested that Sindbad’s Storybook Voyage is a viable contender for the title of “Disney’s Best Modern Dark Ride.”

While it lacks the brand-name recognition of some of the other attractions based on well-known Disney cartoons, Sindbad’s certainly belongs in the upper echelon of rides at Tokyo Disney Resort, right alongside Fastpass favorites like Pooh’s Hunny Hunt and Monsters, Inc. Ride & Go Seek. Tucked away in a building at the back of DisneySea, you could be forgiven for walking right past it, but this is one ride that should not be missed. 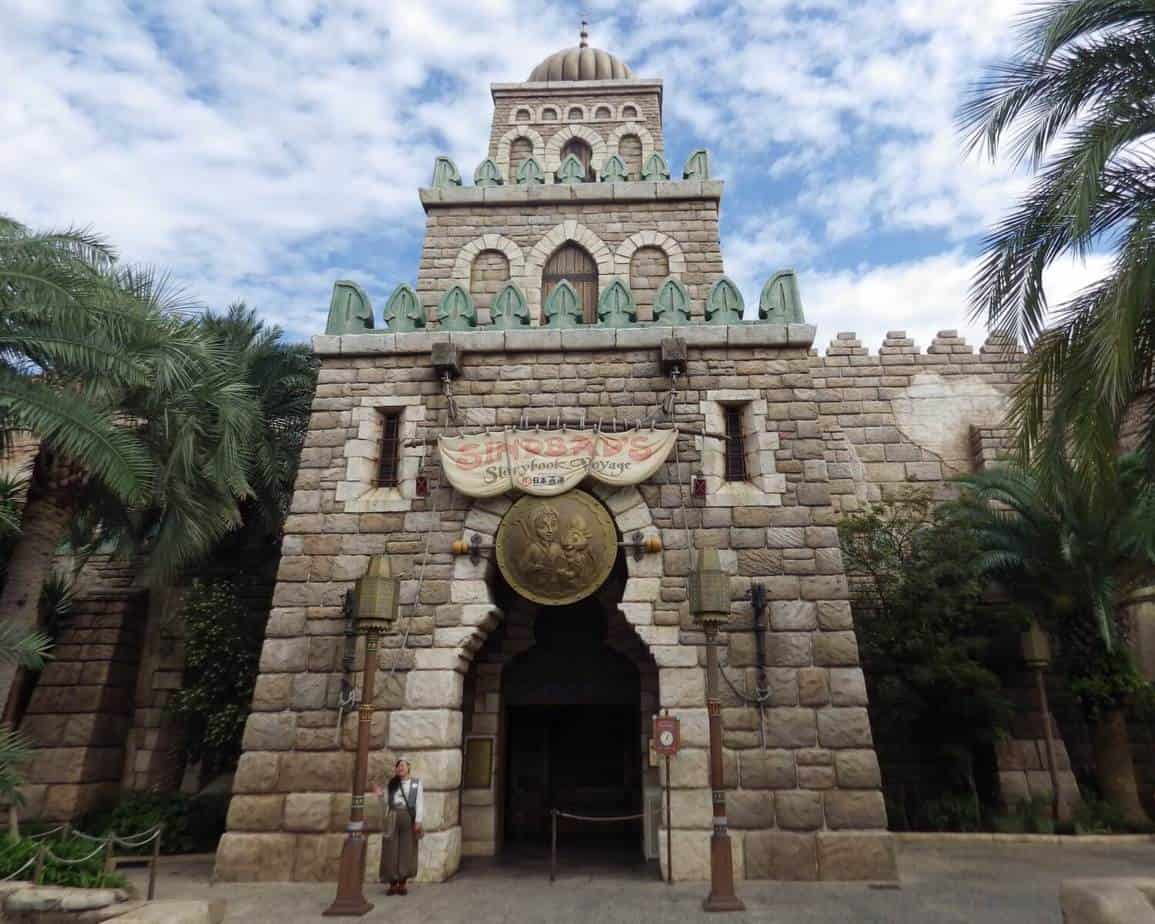 Part of what makes Sindbad’s Storybook Voyage so great is that it functions as a world unto itself, within the larger world of Tokyo DisneySea. In the same way that DisneySea is a park made up of seven ports, Sindbad’s is a ride made up of seven rooms. As you enter the queue, you can see paintings on the wall depicting scenes from these rooms. 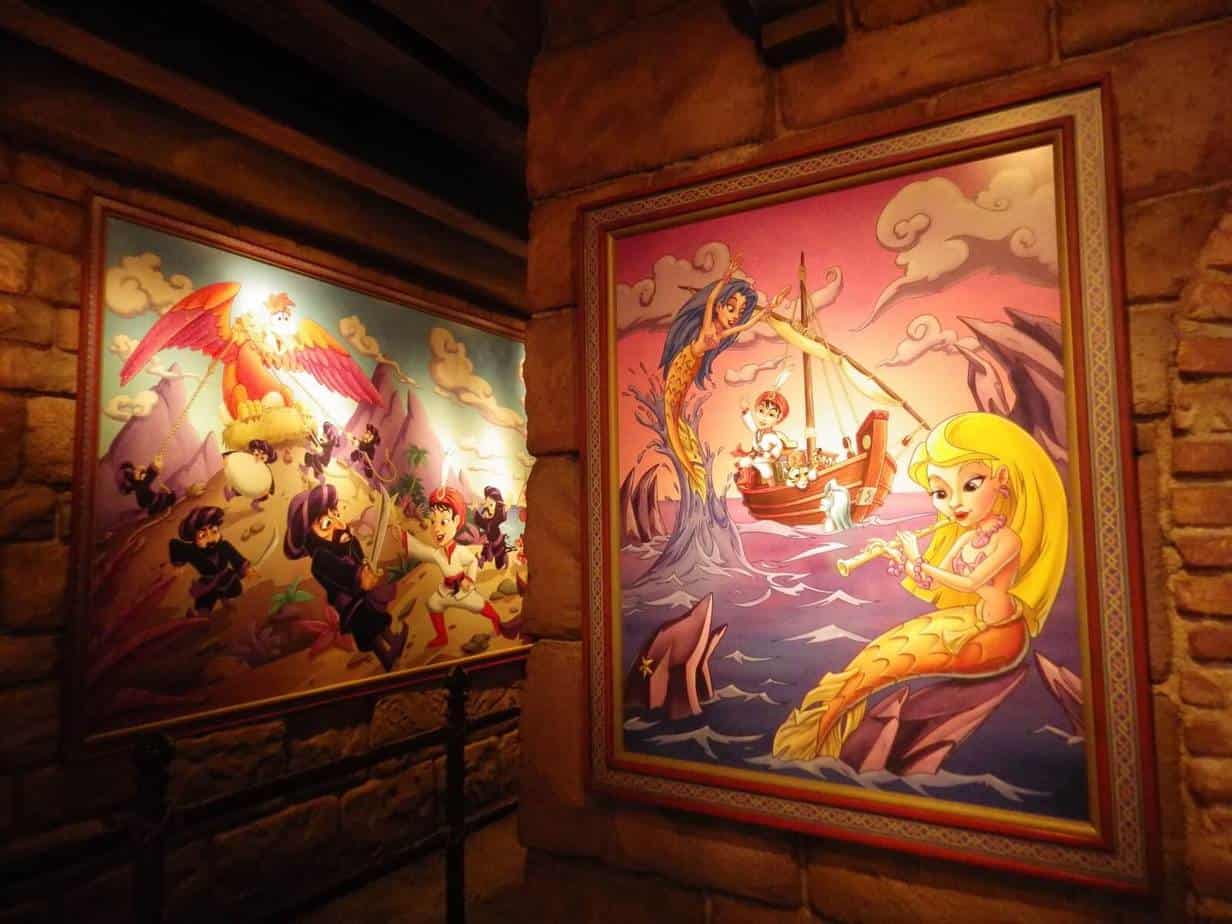 Before boarding your boat, you can also see a map that plots out the voyage you have ahead of you. Each room in the ride is shown as a spot on the map, giving Sindbad’s Storybook Voyage a real sense of geography, which only adds to the feeling of immersion.

Let’s take a quick look at each map spot, and how it fits into the overall ride story.

Here you meet Sindbad and his loveable sidekick, the tiger cub Chandu. 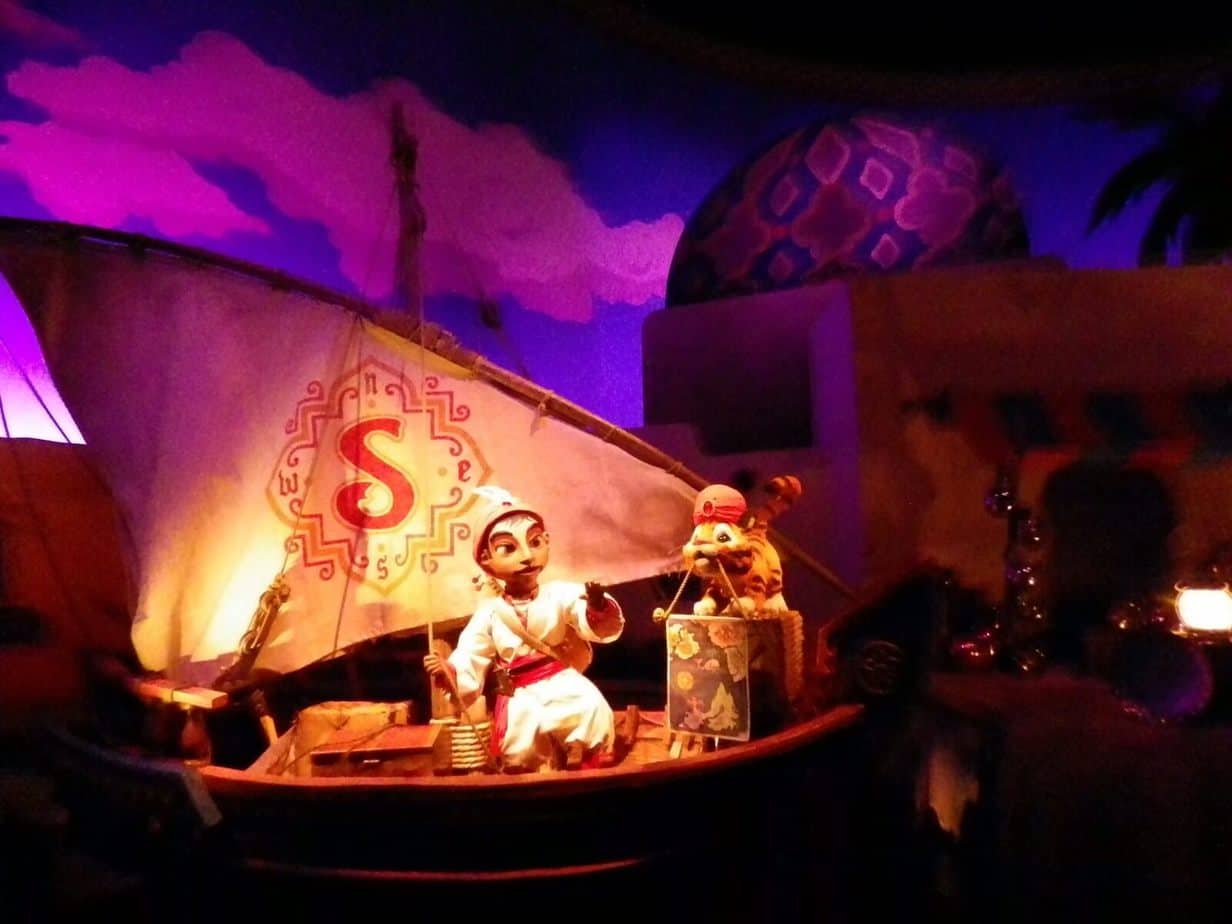 As you pass through the port, you then encounter an impressive array of other audio-animatronic figures: belly dancers, carpet sellers, shepherds and shadow puppeteers. This port is a hub of great activity. Banners reading, “Farewell, Sindbad!” and “Safe Journey, Sindbad!” help convey that Sinbad is getting a hero’s send-off from his home port.

Alan Menken, the composer responsible for some of Disney’s most memorable songs (he wrote the music for The Little Mermaid, Beauty and the Beast, and Aladdin, to name a few), collaborated with lyricist Glenn Slater on the theme song for Sindbad’s Storybook Voyage. That song, “Compass of Your Heart,” is the very definition of an earworm: starting with Sindbad’s Home Port, the tune will wiggle its way into your head and get stuck there. You might even find yourself humming it for the remainder of your day at DisneySea.

Soon your boat passes through a dark tunnel, but not before one of three wise men—a white-bearded elder in a turban, holding a glowing orb—warns you about the dangerous weather ahead, saying, Ki wo tsukero, Sindbad! Or, “Beware, Sindbad!” 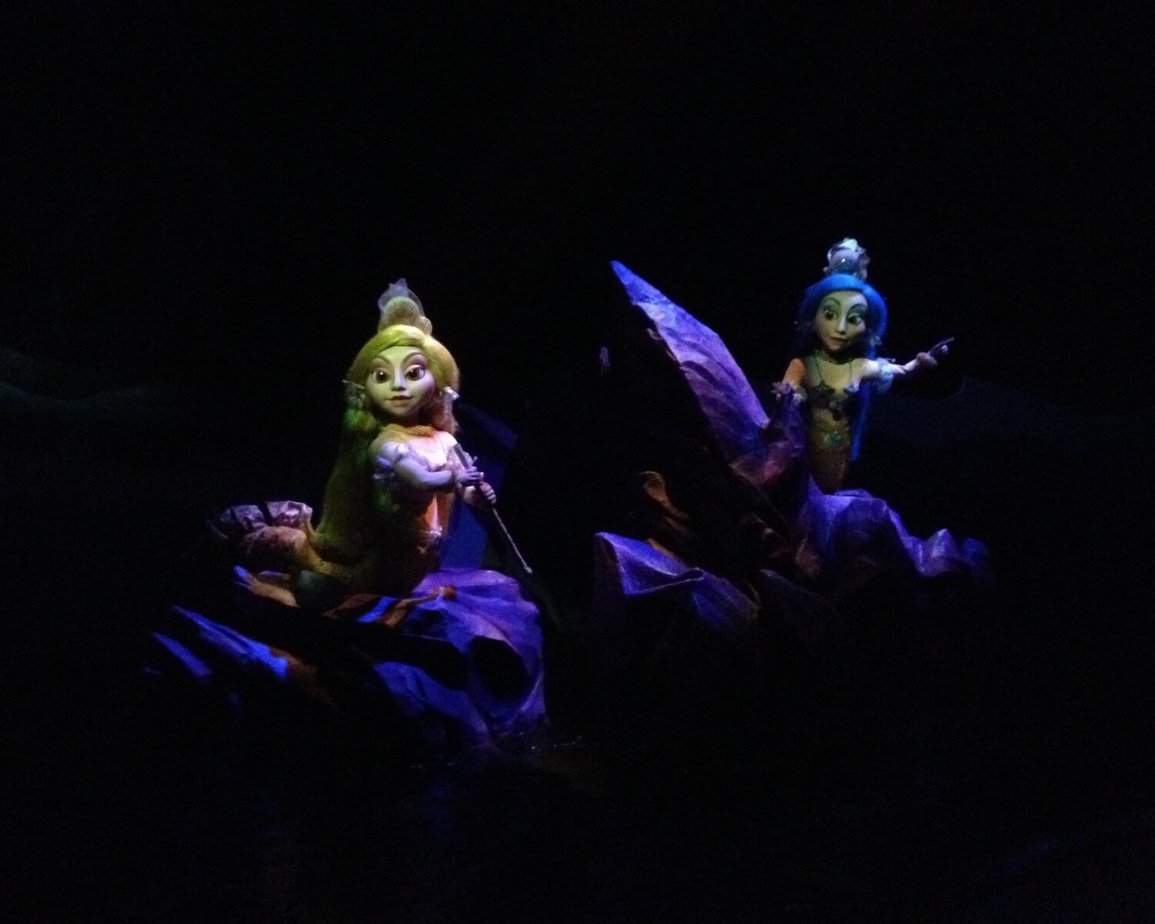 As you enter this dark room, you can feel some light raindrops sprinkling down on you, simulating the effects of a storm. Photographers might want to shield the top of their camera lens. Sindbad has already ship-wrecked his boat on the rocks in the middle of the storm, but the mermaids rescue him, and he sails off in a new boat to his next destination.

The English translation of the lyrics for this part of the theme song reveals a moving metaphor about overcoming obstacles in life:

“Tides may turn you and toss you / And storms may arise / Harm may stand in the path / Where your destiny lies / Just reach out for a friend / When you’re lost and astray / Let the compass of your heart / Show you the way.” 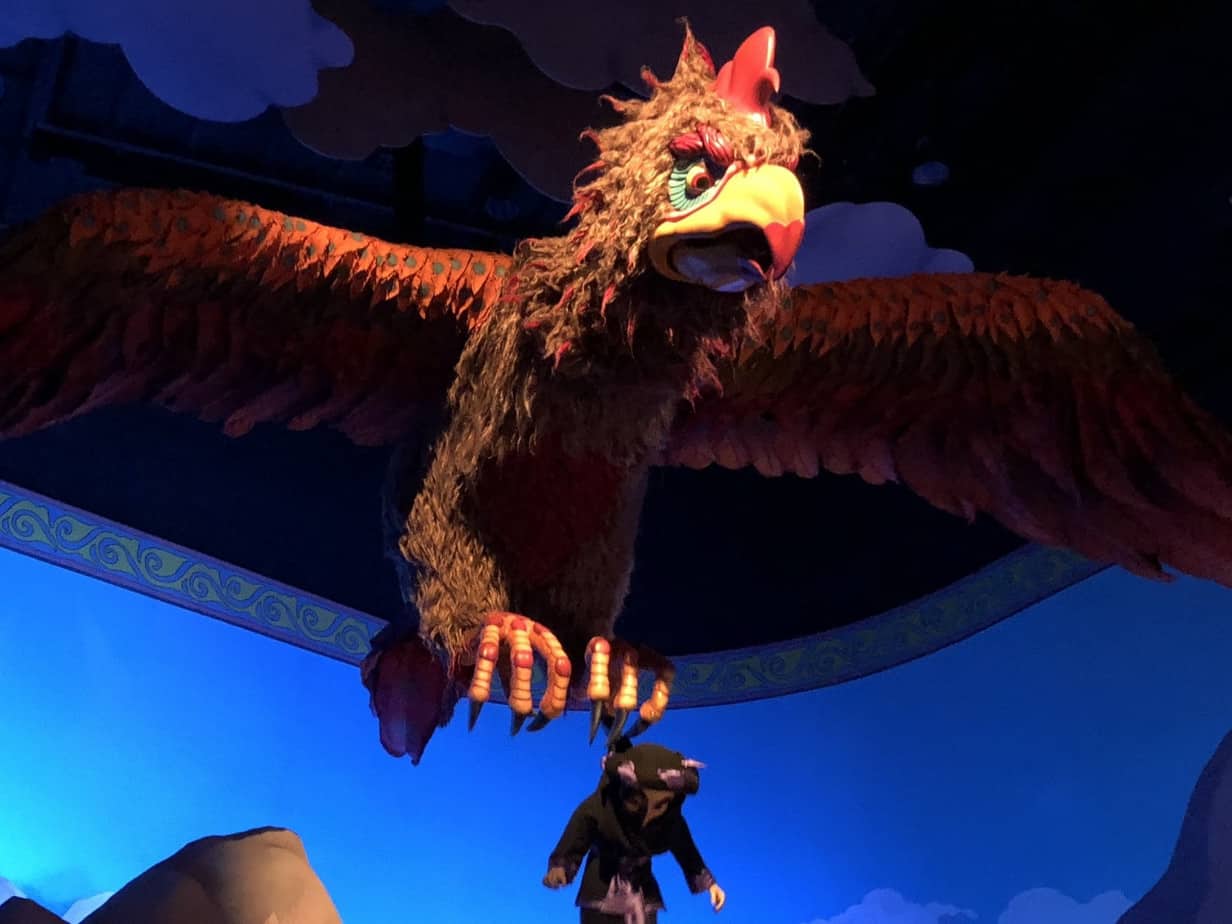 In the next room, a band of pirates is attempting to poach the feathers of the magical birds of Rukh Island. The pirates can be seen trying to hack into the giant eggs of these birds with their blades. Nearby there is a cave of treasure; the birds’ feathers can be used to open locks and gain access to the treasure.

Sindbad and Chandu try to thwart the pirates. They are aided by a full-grown bird, perhaps the mother who laid these eggs. The sight of this huge, winged animatronic figure, screeching as it carries off one of the pirates overhead, is the last thing you see before your boat enters the next room. That is unless of course, you get lucky enough to have the boat to yourself … which is a distinct possibility on this ride.

Sindbad’s Storybook Voyage never usually has more than a 5-minute wait, and if you go on a slow night, when everyone else is up at the front of the park watching Fantasmic!, it should not be too hard to walk right on and have your own private boat, giving you the freedom to slide over or even turn around in your seat.

Cave of the Giant 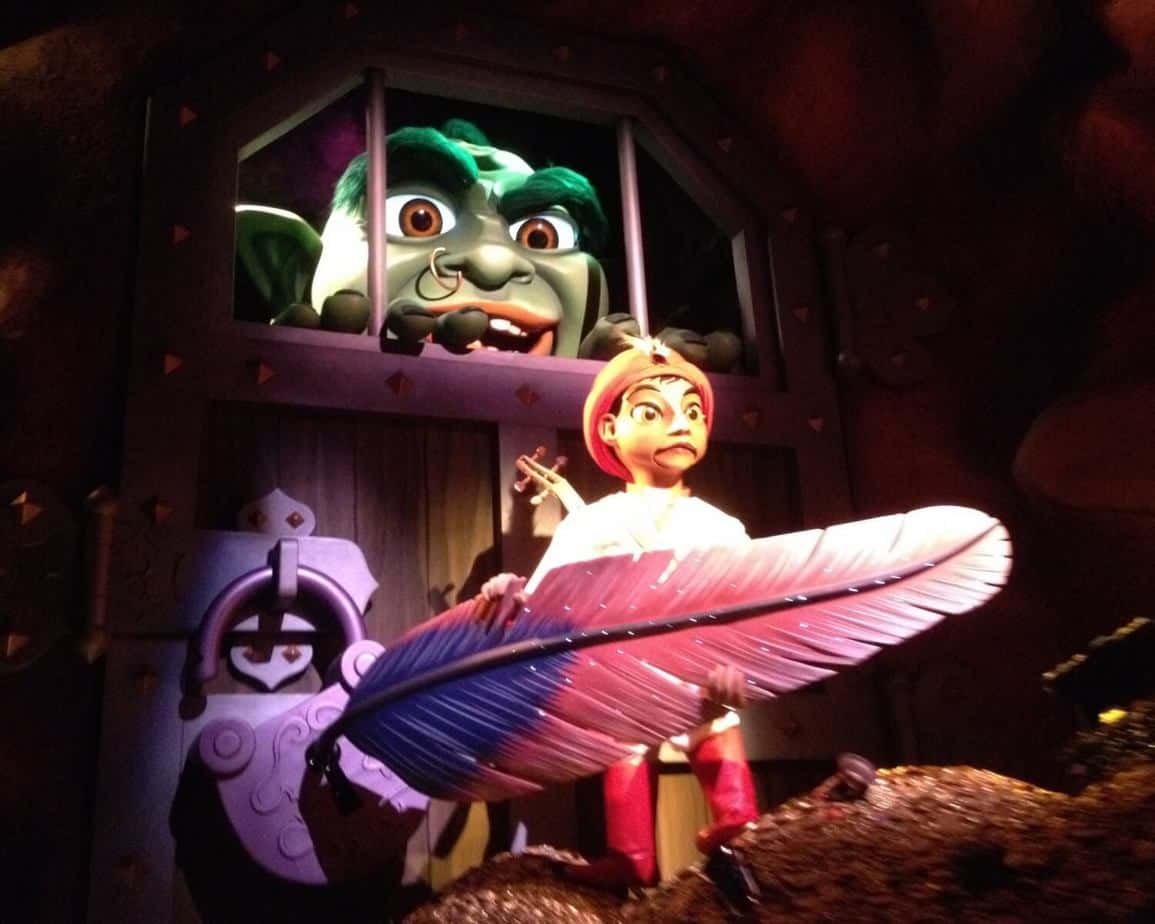 Cave of the Giant is actually two rooms. The first is more like a tunnel, where you can see Sindbad freeing the Giant from his dungeon cell by unlocking it with one of the Rukh feathers.

Outside the cell, the cave is overflowing with treasure. Chandu helps subdue the pirates atop a mountain of gold coins. 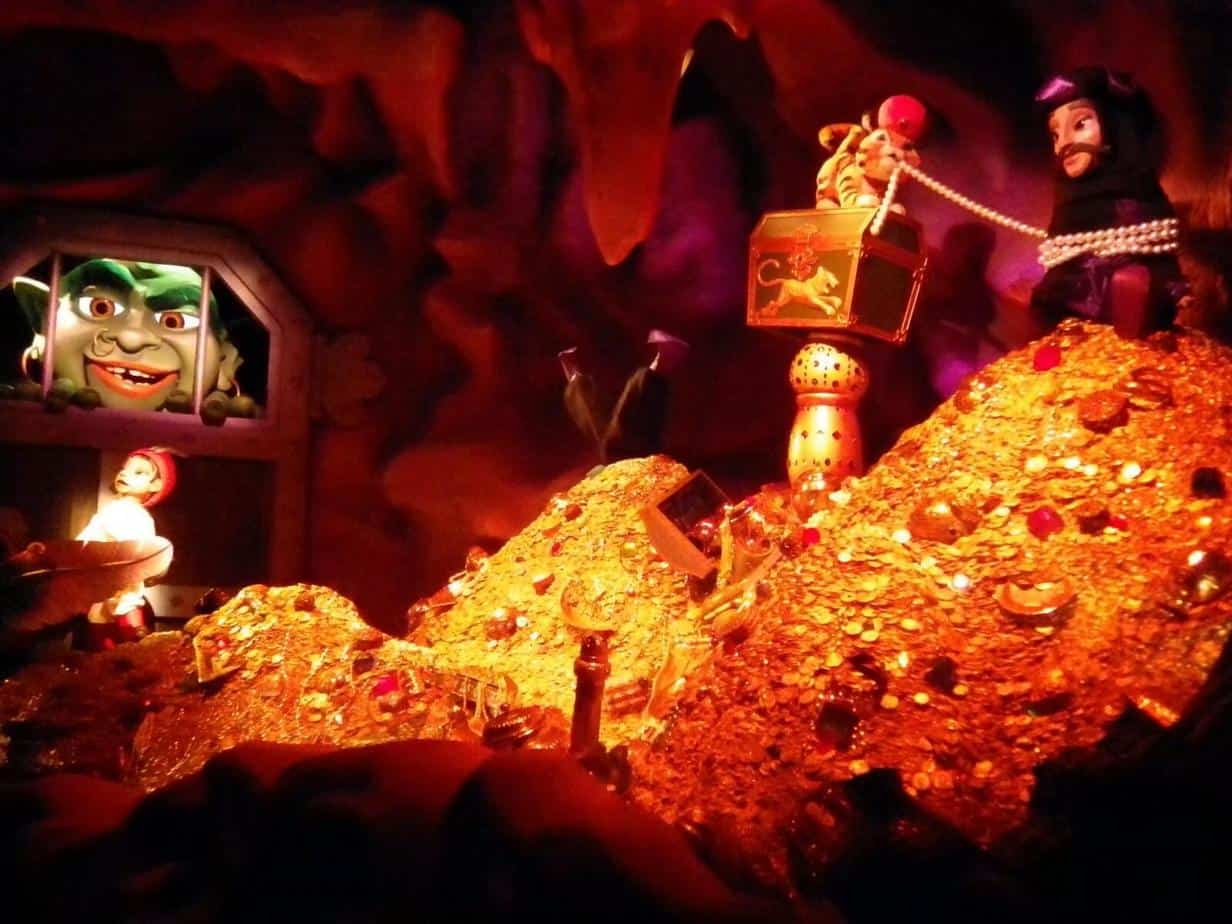 Soon the tunnel opens out into a more expansive room, where the Giant sits free among the treasure hoard, playing a bowed lute. The pirates are all tied up now, and Sindbad is back in his boat, ready to carry off some Rukh feathers and bags of gold as a reward. He stares up at the Giant, seemingly as wowed as the park guests to see this gigantic, show-stopping animatronic figure. 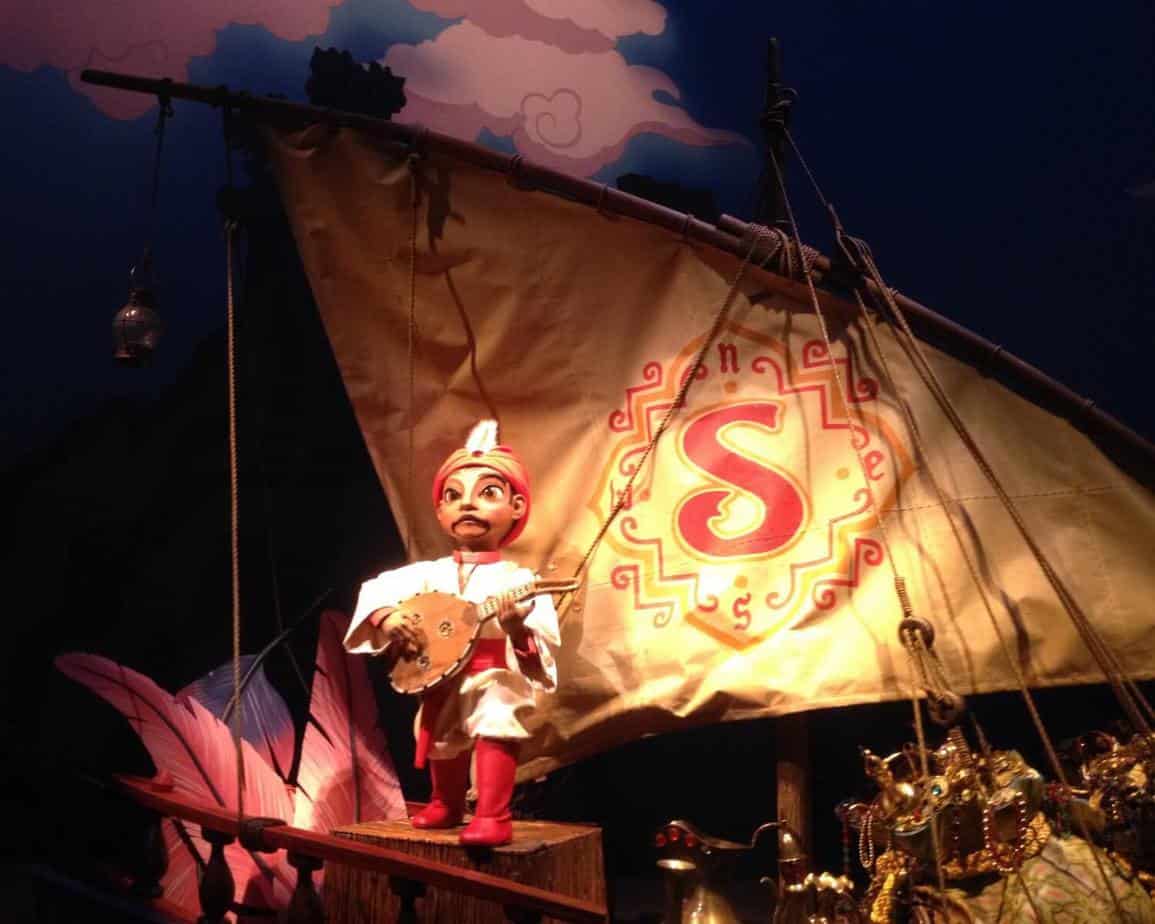 Throughout this room and the tunnel, the Giant’s deep voice joins in the song. He and Sindbad have a nice harmony going. And again, the lyrics impart a meaningful message.

“More than gems / More than gold / One good deed’s worth more / Than wealth untold.”

Palace of the Sultan

Sailing through a large entrance gate, you next enter a palace where people sit in palanquins on the backs of elephants. Here Sindbad receives some enchanted musical instruments from the sultan of a land that has been overrun by wild monkeys.

The Sultan explains that Sindbad can use these instruments to charm the monkeys. His singing voice also harmonizes with Sindbad’s in a nice way. 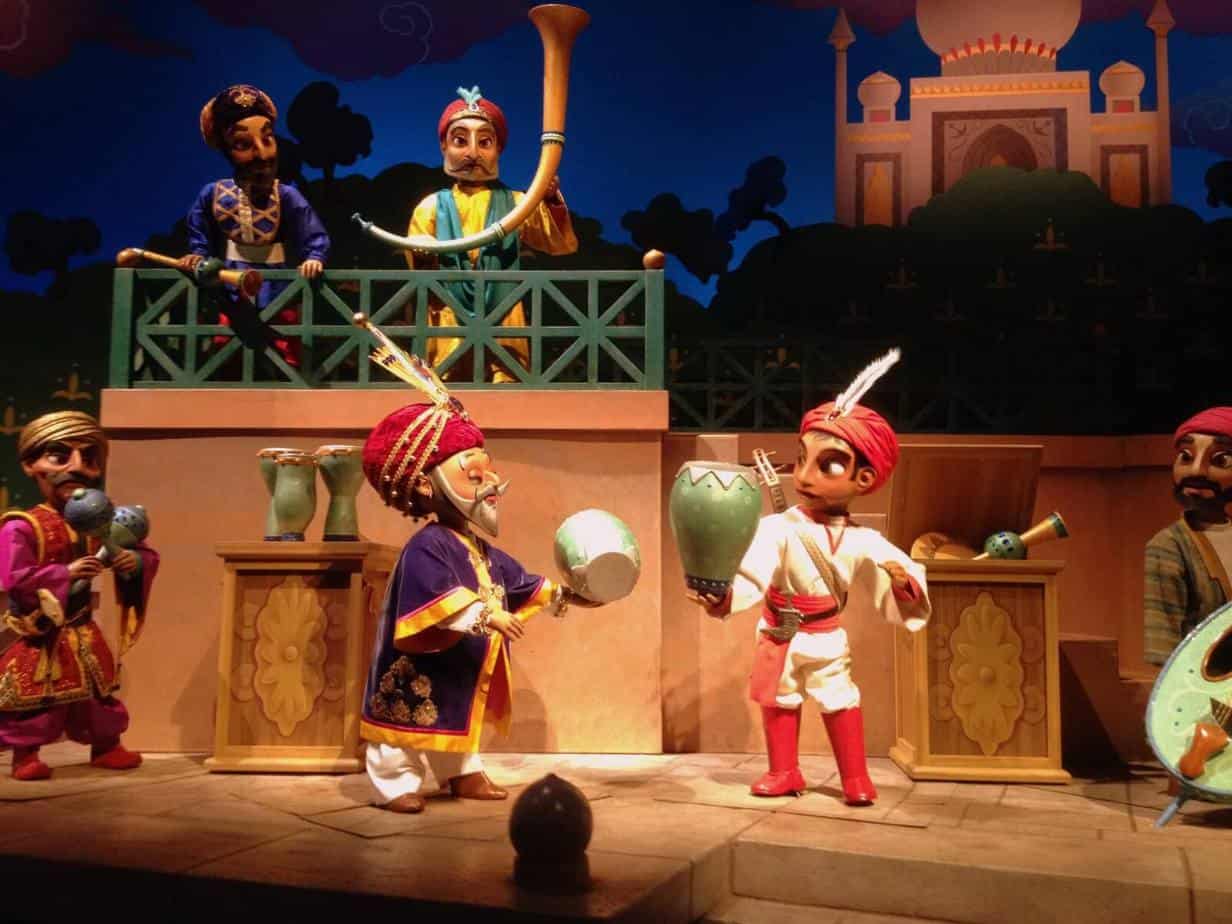 Before you leave, Chandu can be seen bouncing up and down on top of a big drum, in time with the music.

Land of the Monkeys

This room has a different feel to it, in that the singing drops out and the music changes, as the gibbering and whooping of the monkeys, take over, along with a new backing track from those enchanted musical instruments.

First, you pass the Monkey King, crowned with an elaborate headdress. Then you round the bend to a formation of red rocks, where Sindbad and the monkeys are in the middle of a jam session on the instruments.

Translation: “Everyone is very good at playing music. It was really nice to be friends.” 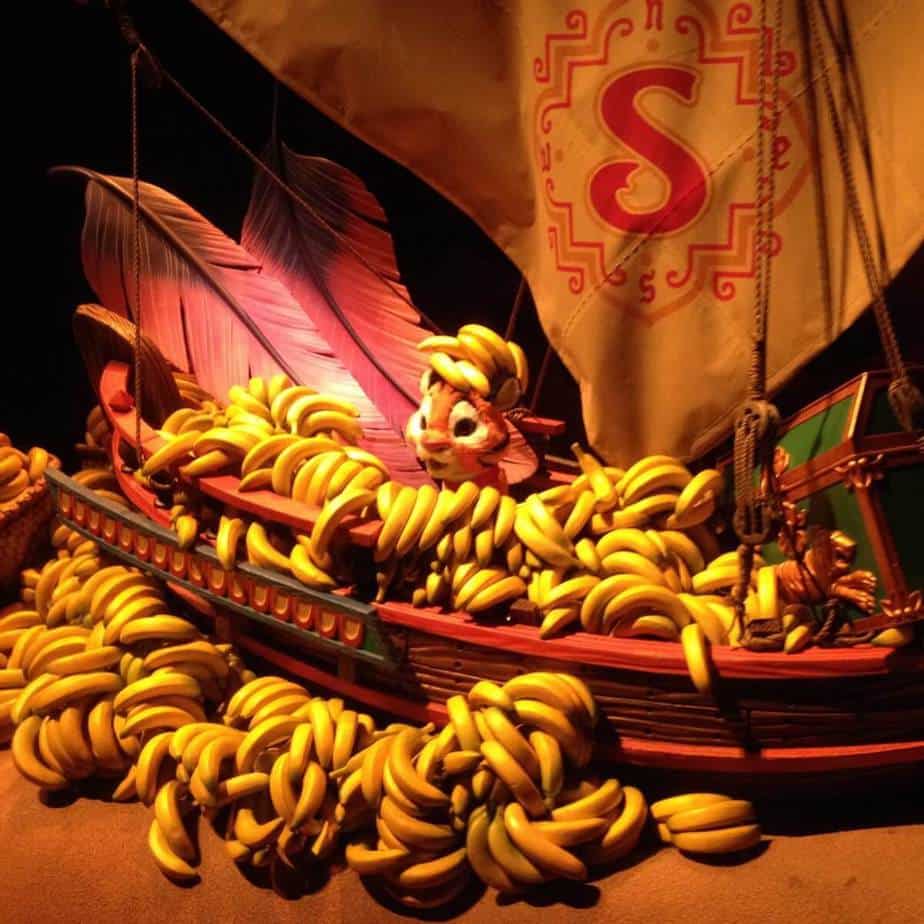 The monkeys lower bananas into Sindbad’s boat via a pulley system. As you leave the room, Chandu can be seen peeking out from under the banana pile.

The final room before Sindbad returns home sees him on the open seas again, where he and Chandu encounter a friendly whale. The whale is first glimpsed coming up out of the water with the moon shining behind it in a blue shadow screen.

Then you turn the corner and see the real whale, yet another massive animatronic figure. It is giving Sindbad and Chandu a ride across the rough waves. The voyage is almost over. 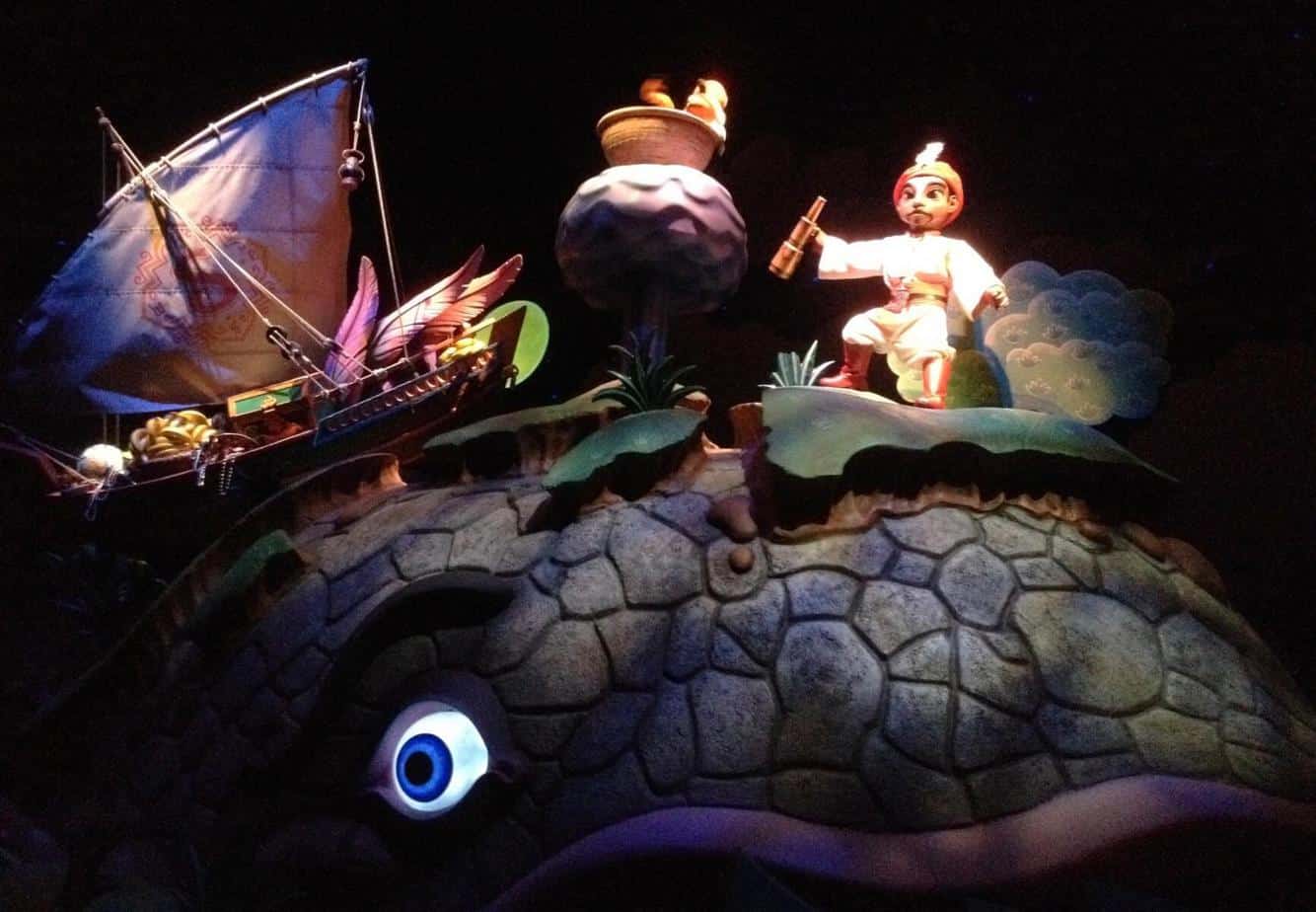 A jubilant night atmosphere awaits Sindbad on his return. In his home port, treasure chests have their contents appraised and inventoried, while camels get loaded with the other souvenirs he picked up on his journey. All those Rukh feathers, bags of gold, enchanted instruments, and bananas make their way across a bridge with a banner reading, “Welcome home, Sindbad!”

Characters we met in the first room, like the belly dancer and three wise men, gather to celebrate Sindbad’s homecoming as fireworks go off in the background. 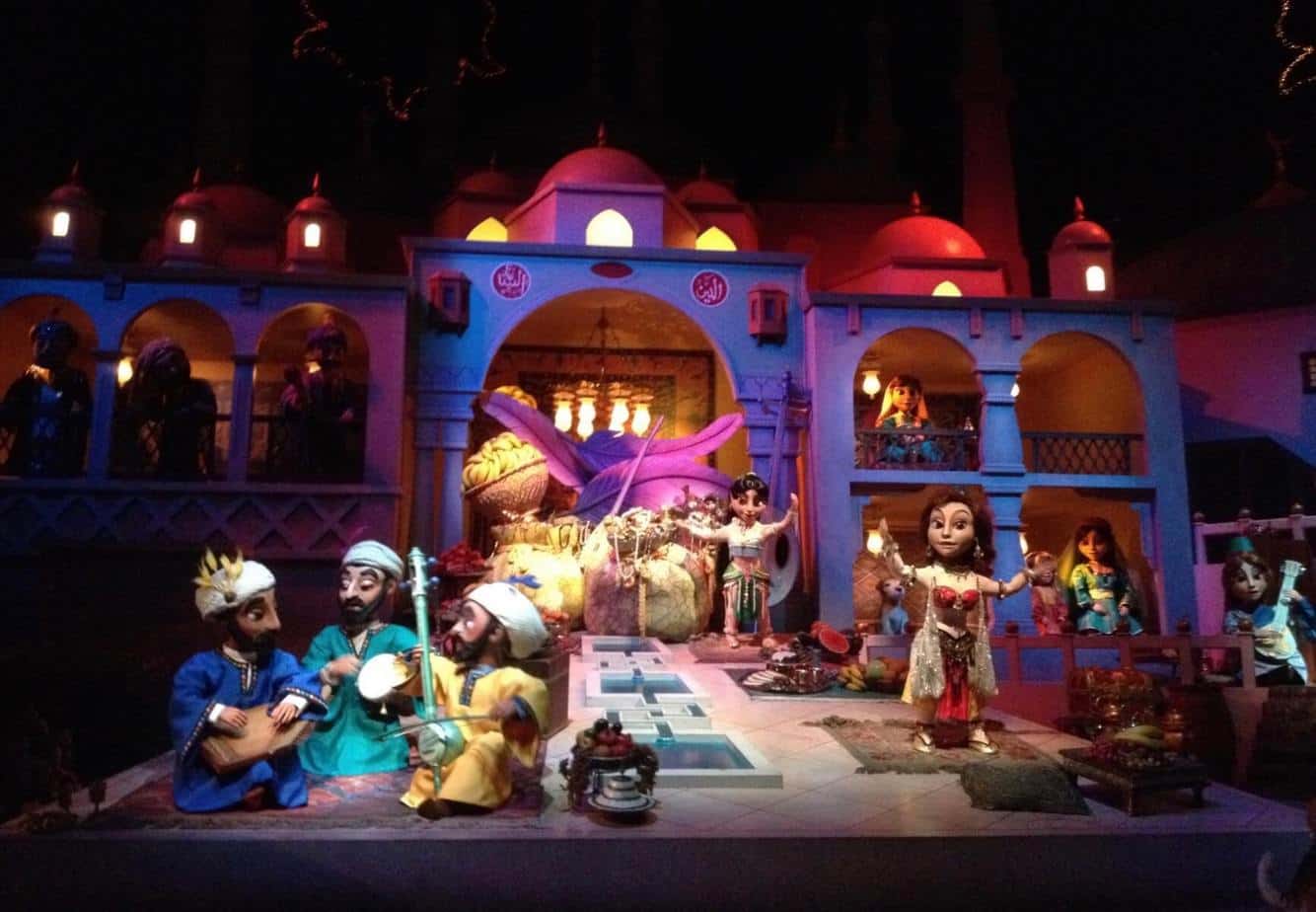 At the end, Sindbad waves goodbye, as Chandu drifts in and out of sleep, having earned the right to rest after a long adventure.

If they see that you are a foreigner, the Cast Member at the entrance to Sindbad’s Storybook Voyage might offer you an English story card, giving a bare-bones outline of what happens on the ride. Or you can ask for one. The cards are double-sided; here is a look at the front and back. 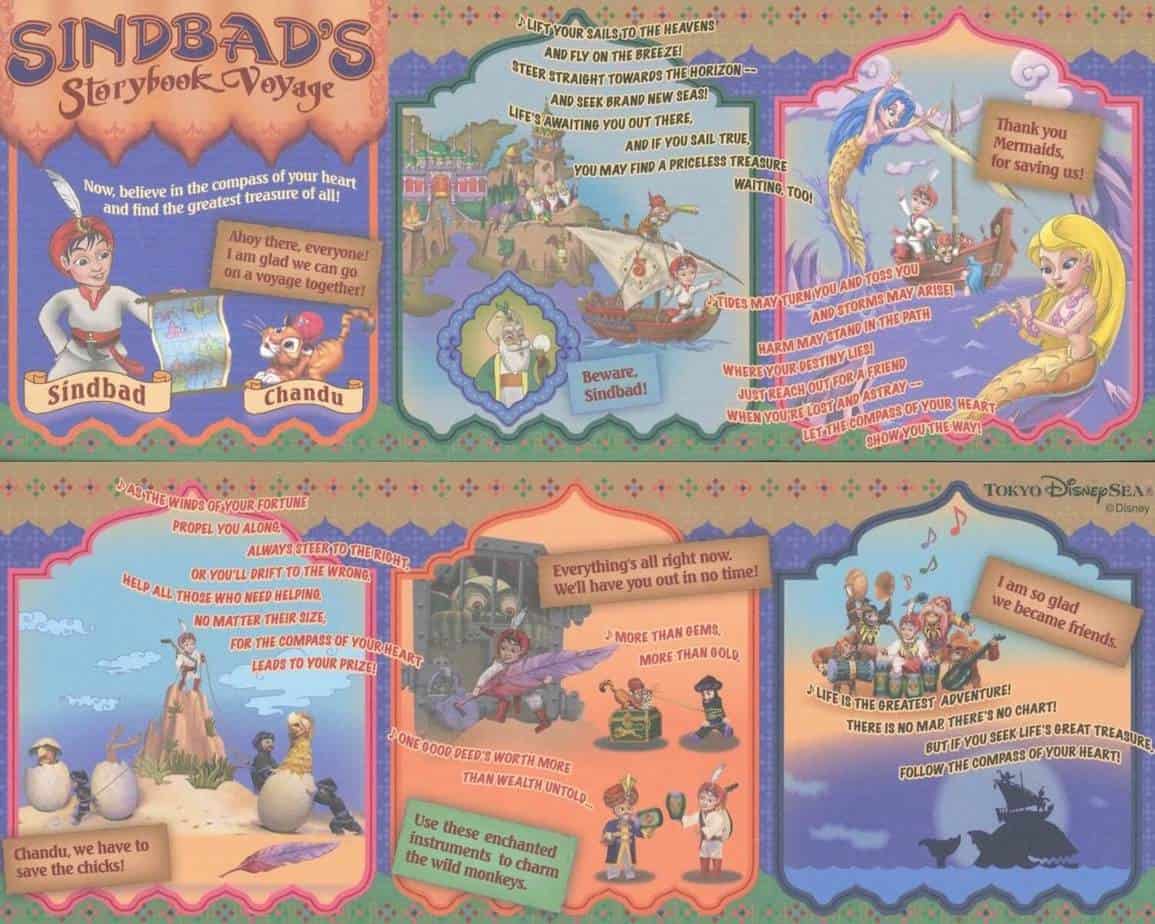 Hopefully, this post will give fans new and old more of an appreciation for Sindbad’s Storybook Voyage. Like a more adventurous version of It’s a Small World, this attraction ferries guests into a world of wonder, exclusively at Tokyo DisneySea.

Photos by The Gaijin Ghost. Follow him on Twitter, and check out this gallery for more pics of Sindbad’s Storybook Voyage at Tokyo DisneySea. 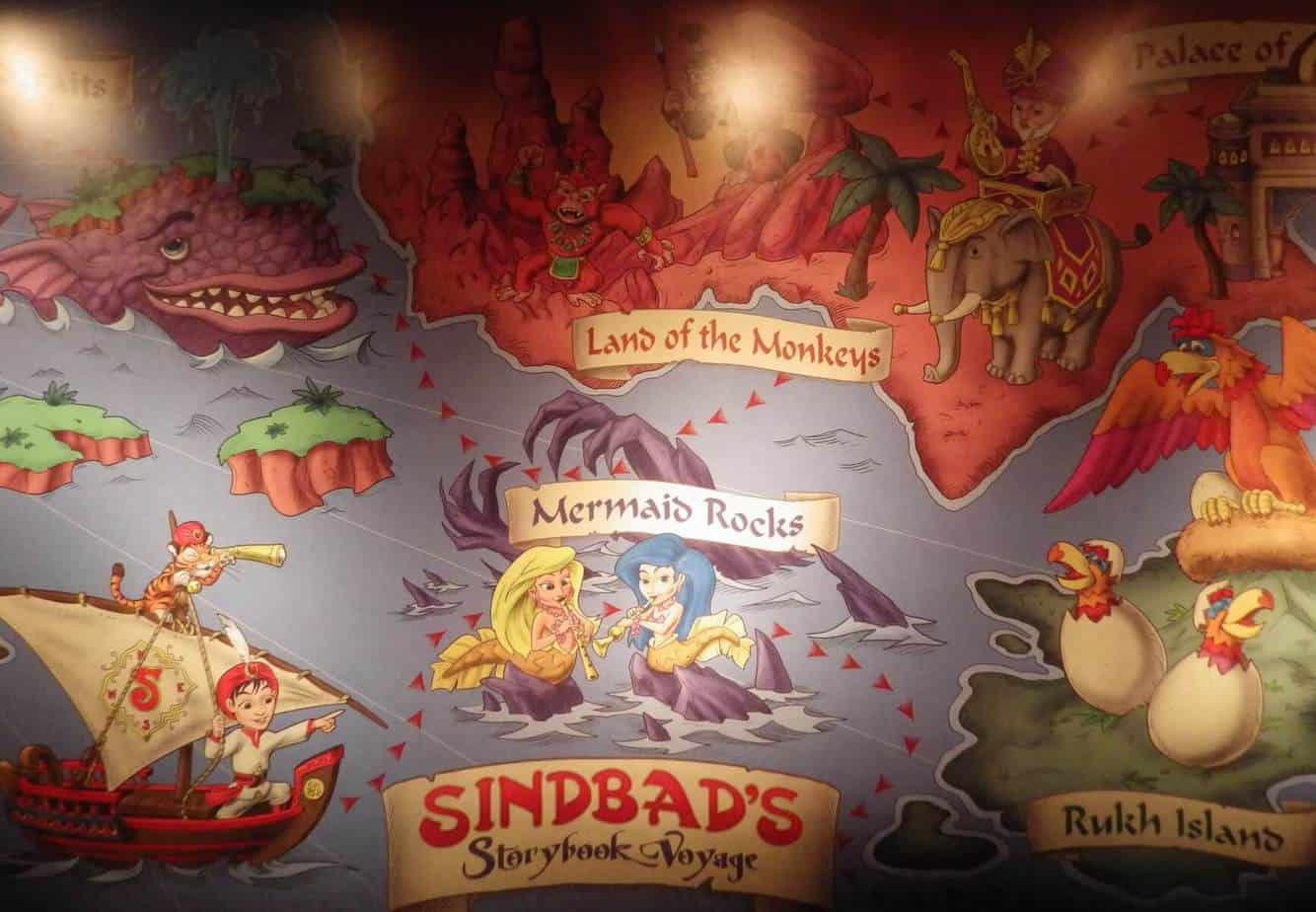