The long-awaited Iron Man Experience now has an official opening date of January 11, 2017, at Hong Kong Disneyland! This the first Marvel-themed attraction for Disney Parks’.

Guests staying at either the Hong Kong Disneyland Hotel or Disney’s Hollywood Hotel receive a “Priority Admission Pass” starting December 23, 2016 (excluding January 9 & 10), which gives guests an exclusive preview. While not stated, this sounds like when a soft launch available for all guests may start. 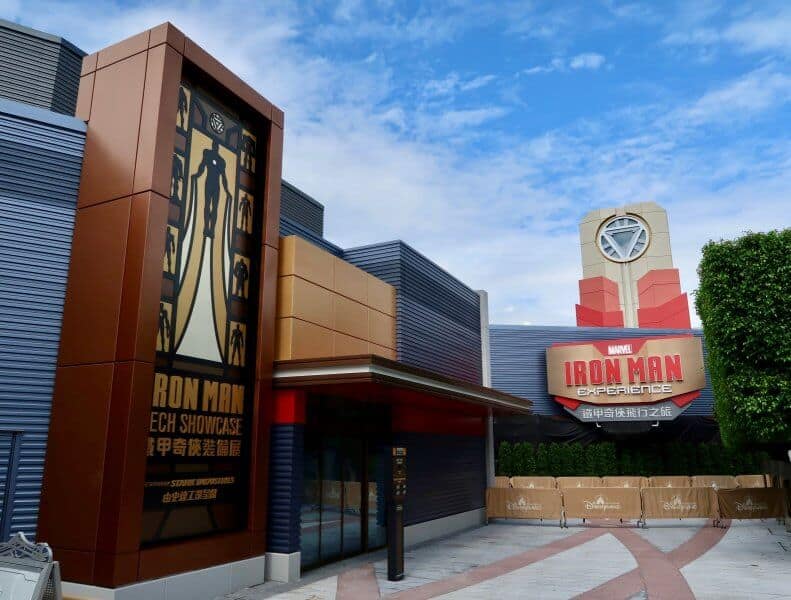 The Stark Expo Shop is open to guests in Tomorrowland and you can view more photos here.

The eminent Innovator and pioneer, Tony Stark has selected Tomorrowland in Hong Kong Disneyland to host Stark Expo, where he will show off his latest high-tech creations to showcase his visions of the future. See the latest and greatest products from Stark Industries at the Stark Expo’s four exhibition halls: the iconic Iron Man MARK III suit in the Hall of Protection, the arc reactor in the Hall of Energy, and gravity-defying Iron Wing in the Hall of Mobility, the MARK I Iron Man Suit in the Hall of Legacy and more.

Put on a pair of StarkVision glasses and explore Tony Stark’s latest innovations up close and fly in the gravity-defying Iron Wing flight vehicle in Iron Man Experience. Whizz alongside Iron Man through streets that resemble those in West Kowloon and downtown, and fly over iconic Hong Kong landmarks like Hong Kong Stark Tower, Tsing Ma Bridge, Victoria Harbour and the city’s pristine mountain ranges.

After safely touching down from your Iron Wing vehicle, don’t miss an once-in-a-lifetime opportunity to personal encounter with Iron Man at Iron Man Tech Showcase presented by Stark Industries.

All images and information from the official Hong Kong Disneyland website.