After spending four full days in beautiful Paris it was time to experience what Disneyland Paris had to offer. We woke up early, checked out of our hotel in Paris, and made our way to the RER to Disneyland. The RER train wasn’t very busy which made the journey much less stressful than we anticipated.

We arrived at the train station and made our way to Disney’s Hotel Santa Fe. About a 10 minute walk. We passed through Disney Village. There are buses to the hotels but we were there relatively early (about 07:00) and wanted to figure out how to get to our hotel on foot.

Once we arrive and made it to the front reception we checked in. The room wasn’t ready yet but we were given our Park Tickets. The Cast Member that checked us in spoke perfect English. We were asked to come back between 15:00 and 16:00 to see if our room would be ready. Across from reception there is a place bag storage (for free). Dropped our bags off and headed off to the Parks! 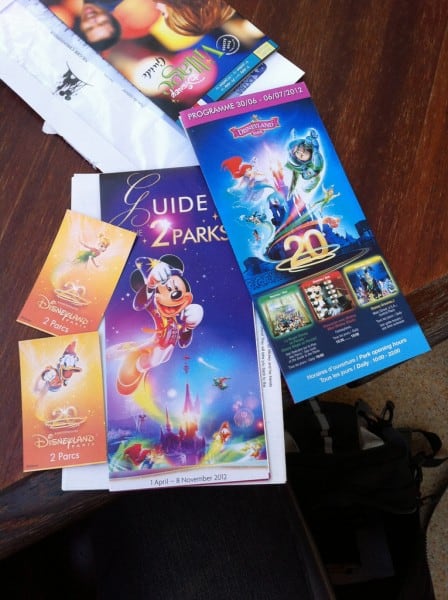 We’ve been up a few hours by this point and were starving. While traveling we do our best to avoid food we can get at home as much as possible. This was an exception. The McDonald’s was the only restaurant open that was the fastest and the cheapest. Also I had to check into foursquare (don’t judge!). 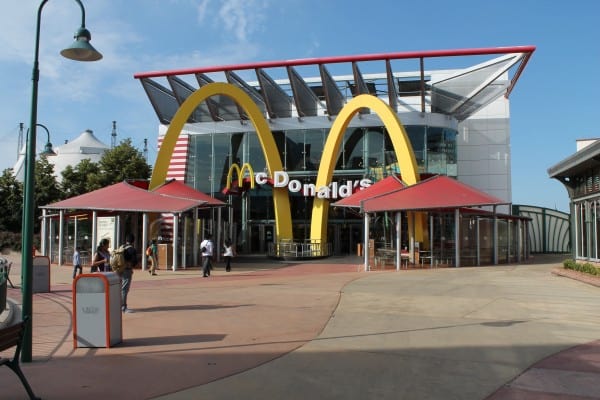 Made our way through Disney Village and around the area where you have access to the train station there were armed guards walking around. Similar to the ones at the Eiffel Tower, The Louvre, etc. It took me back a bit to see armed guards so close to a Disney Park. 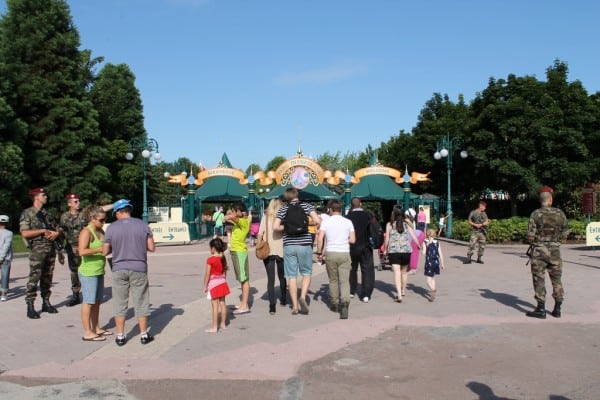 Security at entrance to Disneyland Paris

After the initial shock of the guards wore off we passed through security where our bags were put through an X-ray machine. There was a separate line for Cast Members (strange to see it out in the open compared to other Disney Parks). The first sight you see it the magnificent Disneyland Hotel. 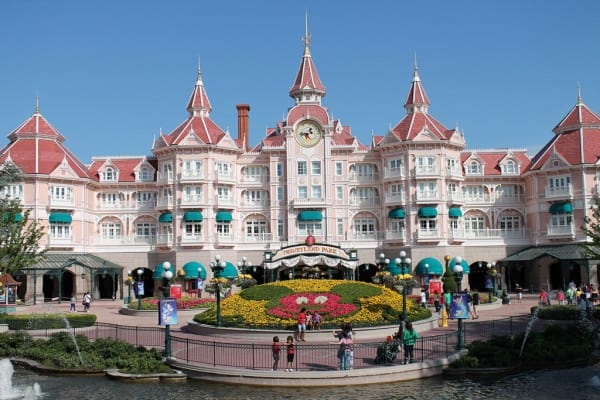 Of course the Mickey Head made of flowers made an appearance along with a few other statues around. The light poles had 20th Anniversary Banners attached to them all. 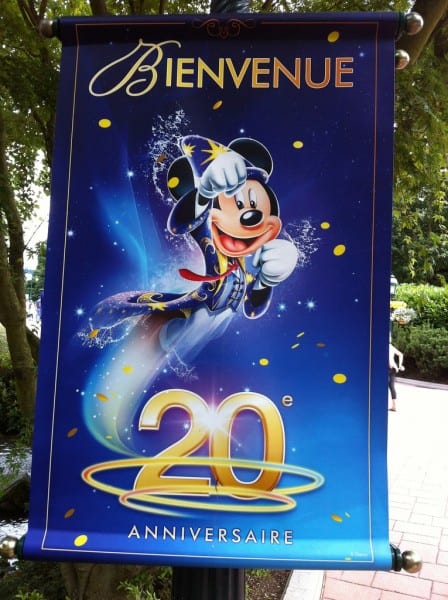 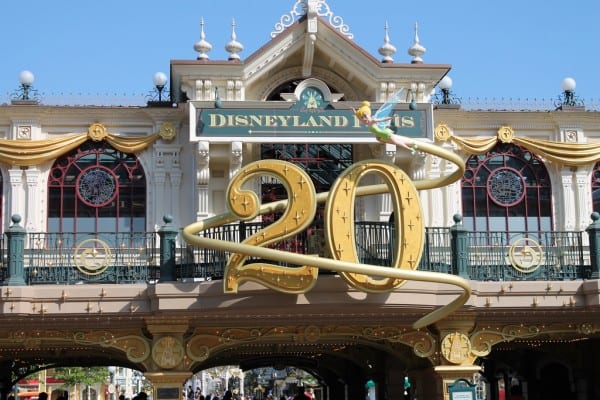 Being Resort Guests we has access to the park at 08:00 before it opened at 10:00. After passing under the train station you are greeted with an extremely familiar site, Main Street USA. We instantly felt at home and were in our happy place! The only noticeable difference was what you see at the end of Main Street. 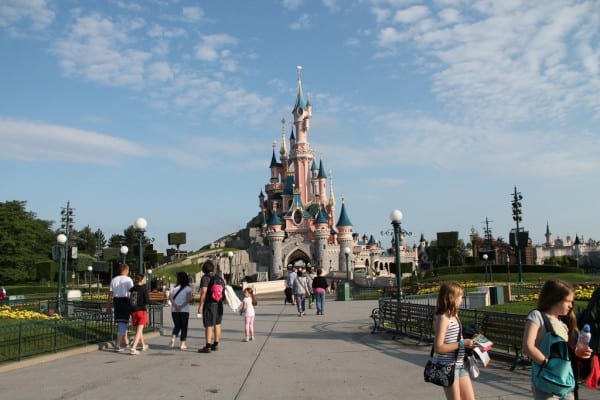 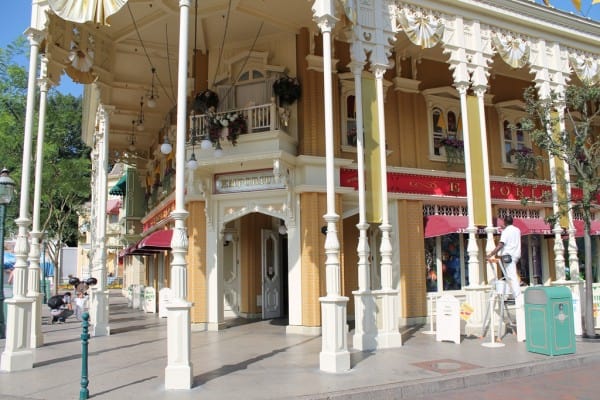 What a beautifully crafted castle, the amount of detail is beyond what I was expecting. The hillside is a very unique touch and the right-hand side of the castle extends to the edge of the park, and you actually walk through gates to get into Fantasyland. 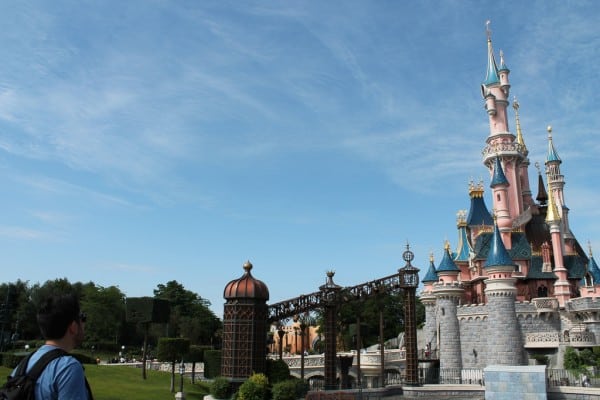 Once we lifted our jaws off the clean streets in front of the castle we made our way into Discoveryland (their version of Tomorrowland). First up was Space Mountain: Mission 2 or as I like to call it “Steam Punk Mountain”. This version of Space Mountain is the only one that goes upside down. Think of it as a darker Rockin’ Roller Coaster with a take off at an incline. It was a bit rough and the head rest was hard, but the attraction a ton of fun! 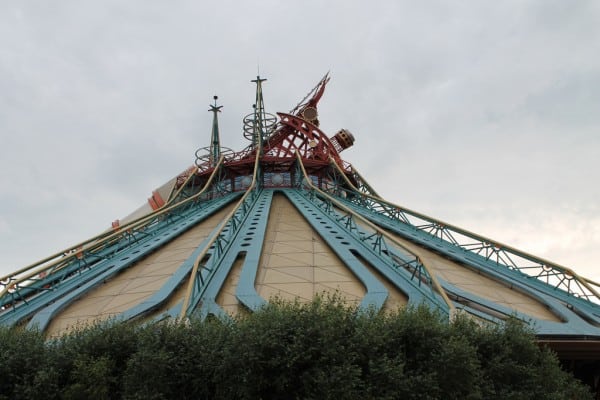 Once we saw our embarrassing Space Mountain photos we headed over to Star Tours. Their version is still the original. Complete with an X-Wing at the entrance. Right across from Star Tours were two very in love robots. 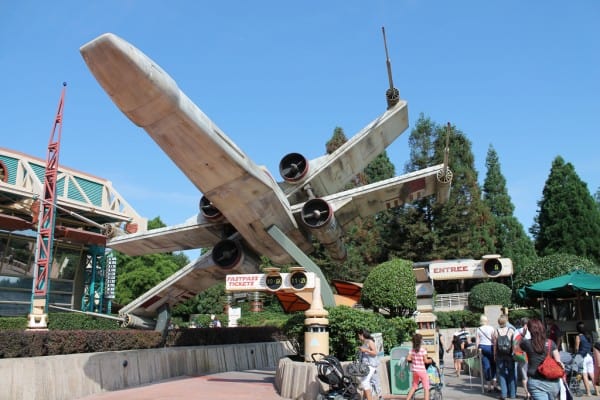 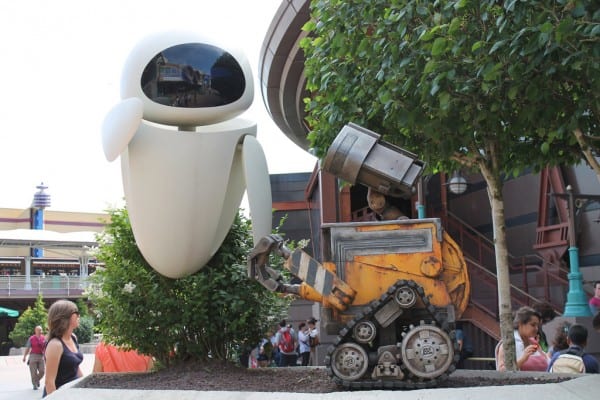 Before heading to Fantasyland we grabbed Fast Passes for Buzz Lightyear Laser Blast. Their Fast Pass machines are different in that you have to swipe your Park Ticket or Pass instead of inserting it.

In Fantasyland we walked through Alice’s Curious Labyrinth! This is unique to the park and is probably my favourite part of Fantasyland. You walk through a labyrinth that takes you through the story of Alice in Wonderland. 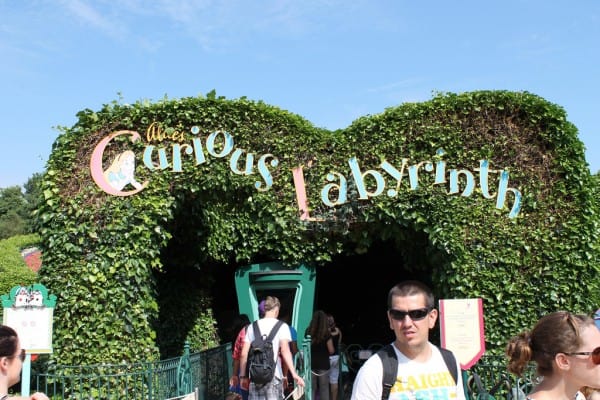 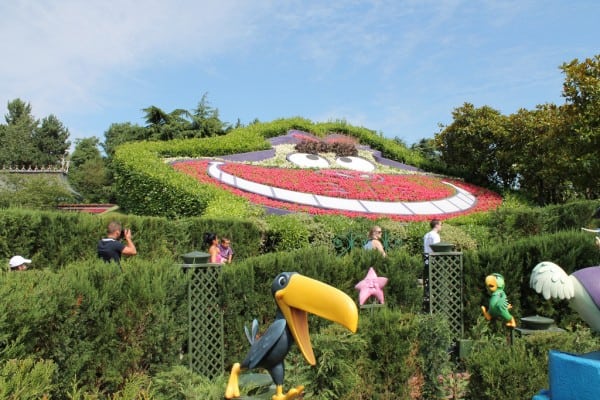 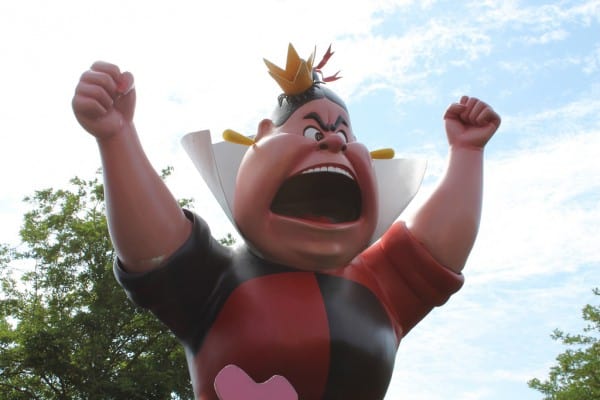 OFF WITH THEIR HEADS

The labyrinth took us longer than anticipated. About 15-20 minutes to walk through and enjoy everything. We narrowly escaped with our heads intact. Next up was Buzz Lightyear Laser Blast, which is the same as both US Park versions. 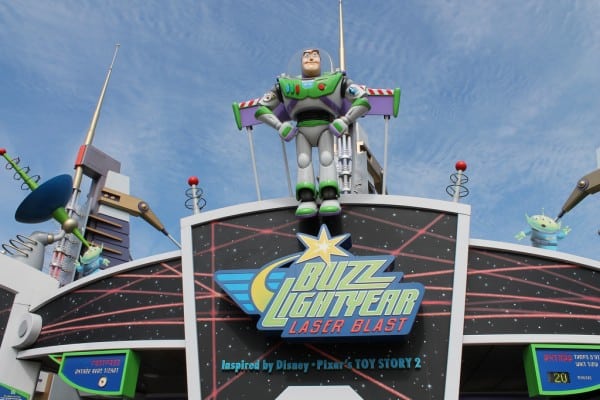 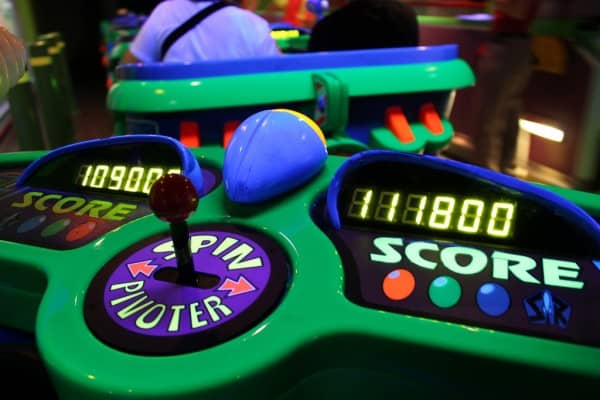 Frontierland was next on the list. As our research showed, Big Thunder Mountain already had a 60+ minute wait and it was only 11:00. We grabbed Fast Passes which were already well into the afternoon. Phantom Manor is near BTM so that was next. 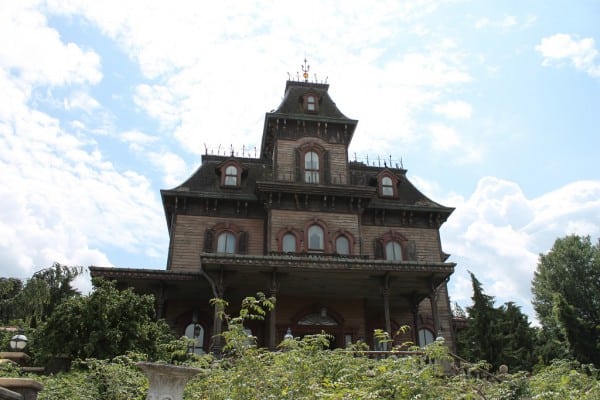 The inside of the attraction is the same in the beginning (compared to the US versions). The theming is slightly different as it’s set to fit with the theme inside Frontierland and the story is tied to Big Thunder Mountain. The ending is different but I will leave that as a mystery. 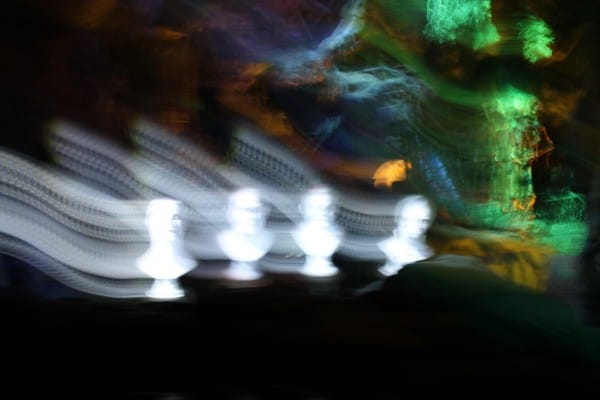 What’s this we see!? – Phantom Manor

The detail on the outside is outstanding and has a water front where you can see Big Thunder Mountain. You can see the care to detail that went into the imagineering. 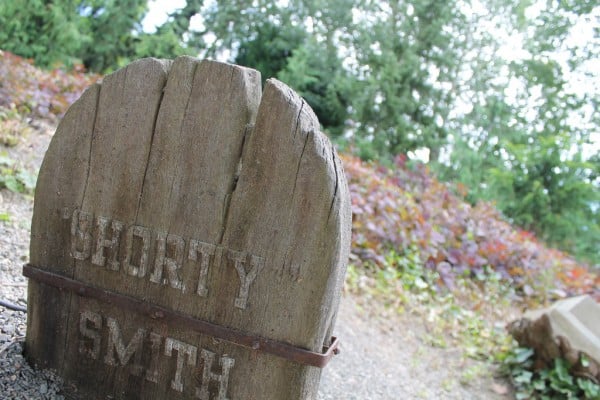 Lunch was in Toad Hall Restaurant in Fantasyland. It was the typical counter service food with burgers and fries. For dessert we treated ourselves to their 20th Anniversary Cookie! The interior was well themed and if you paid attention some of the photos on the wall changed every few minutes. 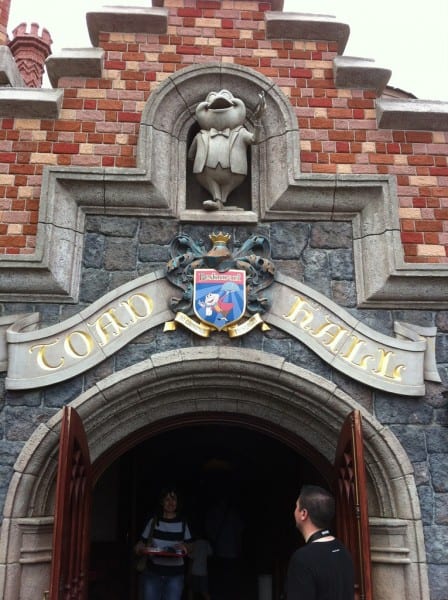 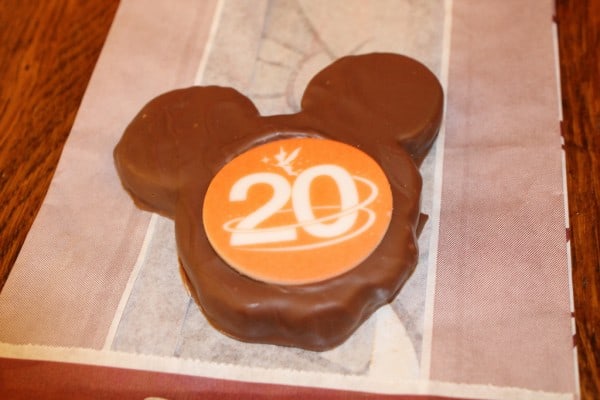 Toad Hall Restaurant is right next to Adventureland and Pirates of the Caribbean. That was next on the list. The queue was 30 minutes but the line kept moving and did not feel like it. Also helped that the theming for the queue was hands down the best out of other versions of the attraction. 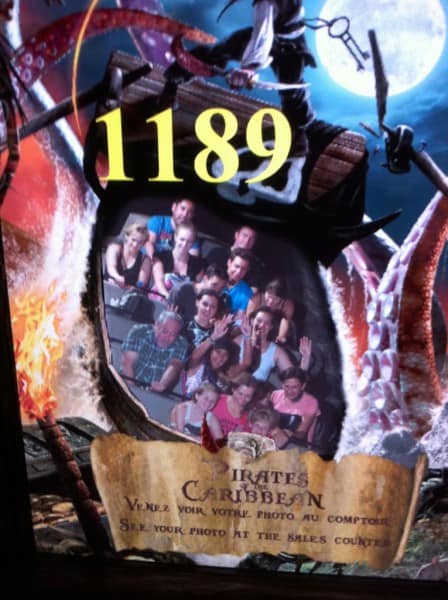 Pirates of the Caribbean takes your photo

After having our photo taken on Pirates of the Caribbean, which we weren’t expecting, we went to ride Big Thunder Mountain. When we made it there we found that the attraction was currently down and they were unsure when it would be operating again. The Cast Member ensured us that we can use our Fast Pass later in the day. By now it was late afternoon and we were beginning to get tired, from being awake since 05:00. Before walking back to the hotel we stopped and made a reservation for Walt’s – An American Restaurant for 18:00 the next day!

We had to go to the front reception to get our room cards. The Cast Member asked if it was our first visit and I promptly answered “yes”. She shuffled some papers around and told me to wait one minute as she had to go to the back. After about a minute she returned with a huge smile on her face. She told us that she upgraded us to their newly renovated Cars themed rooms! I’ve never had an upgrade before so this was a welcomed surprise! Obviously we had to take tons of photo of the room once we got there. 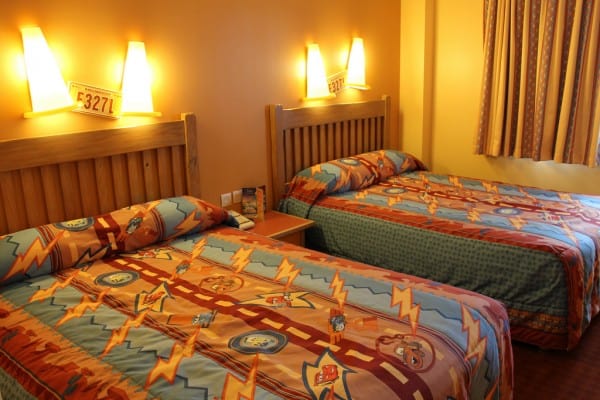 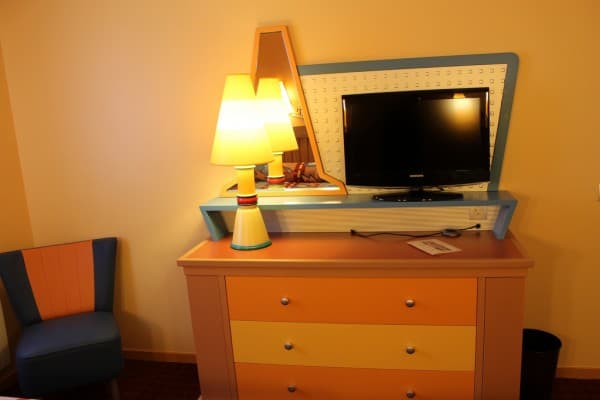 After resting and washing up at the hotel we headed to McDonald’s in Disney Village for a cheap dinner along with free Wi-Fi. If you ever visit make sure to use the self-service order kiosks. They are much quicker and incredibly easy to use. Note they only take credit cards. 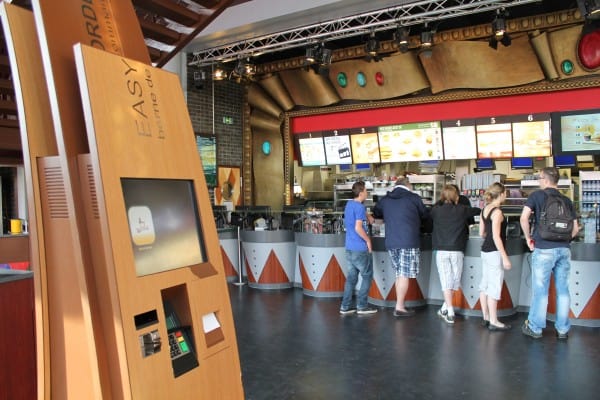 Made it back to Disneyland Park at 18:30 about 30 mins before Disney Magic on Parade started. We got a fantastic spot on Main Street and got a prime view of their 20th Anniversary Parade! Warning: The music is incredibly catchy and you’re going to wish you didn’t hear it.

Once the magical parade passed us we made b-line to the covered walk-ways on Main Street by going through the nearest shop. It was much quieter and less crowded and we were able to make it to Big Thunder Mountain in record time. Big Thunder Mountain is the same as any other Disney Park with one subtle difference that you can easily miss. Most of the attraction is on it’s very own island! When you begin your journey it goes in a dark tunnel and another long dark tunnel when you’ve finished.

We had quite a bit of time before Disney Dreams at 23:00, so we decided to do some shopping at the various shops around Main Street. Bought quite a few 20th Anniversary goodies for friends, family, and myself. When will be here next? Buy everything possible! Ended up spending 118€ (~$144 CND/USD).

Once the shopping spree finished, and giving the Disney Corporation a chunk of my next pay cheque, it was time to secure a spot for Disney Dreams. Got a spot just near the end of Main Street. The wait was well worth it….

Absolutely stunning performance, it is one of the best outdoor Disney shows that uses the castle. The usage of Disney Characters that have ties to France was a given and added that touch that made it uniquely Paris. We followed the massive wave of guests leaving the park, since the park was closed for the evening, and made our way to an incredibly crowded Starbucks in Disney Village to grab a drink (Have you tried the new Refreshers yet?) and free Wi-Fi before bed. 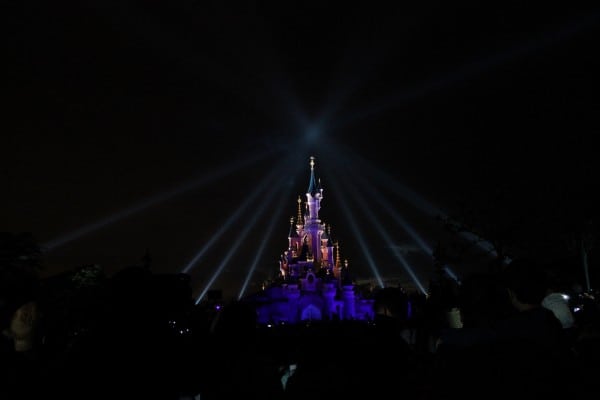 An incredibly long and exhausting day but it was worth every second. The park felt like home instantly but was different enough to make it feel as if we were discovering Disney for the first time! You always remember your first. Thankfully we have two more full days in Disneyland Paris! In the next report we head to Walt Disney Studios and ride the ever popular Crush’s Coaster and dine at Walt’s – An American Restaurant.

You can view all the photos from this post on Flickr and videos on YouTube. Love to hear any questions or comments you may have! Leave them below.