In 2009, about ten years ago, I agreed to coffee at Starbucks attached to Indigo in Saskatoon, Saskatchewan. It was with John Himpe, whom I barely knew, but had seen at various gatherings with mutual friends. One random day he asked me on a date via Twitter. Despite being a shy, insecure, closeted 23-year-old, I said yes.

I took the 30-minute city bus to the coffee shop (I was still in University at the time). He was sitting on a worn, brown leather couch with his “Venti Americano with light room,” patiently waiting. Before I even had a good smartphone, I sent him text messages while en route to tell him I was running late.

Once I arrived, I nervously sat across from him on a comfortable chair, drink in hand (I don’t remember what I got as I wasn’t a coffee drinker then). After a few minutes of talking, I remember my nerves slowly melting away with every passing minute. John always listened, and even on our first date, he’d ask plenty of questions and listen to my long-winded answers.

When the barista came up to us and said they were closing in 5 minutes, we knew that 4 hours had gone by without notice. John offered to drive me home, then asked if we could do coffee again the following evening. I said yes.

The moment I stepped foot into that Starbucks, I felt an instant connection (John told me he felt the same). Since that evening, he and I have been inseparable. At the time, I had no idea how much we’d impact each other’s lives and how John would become a crucial part of TDR Explorer. 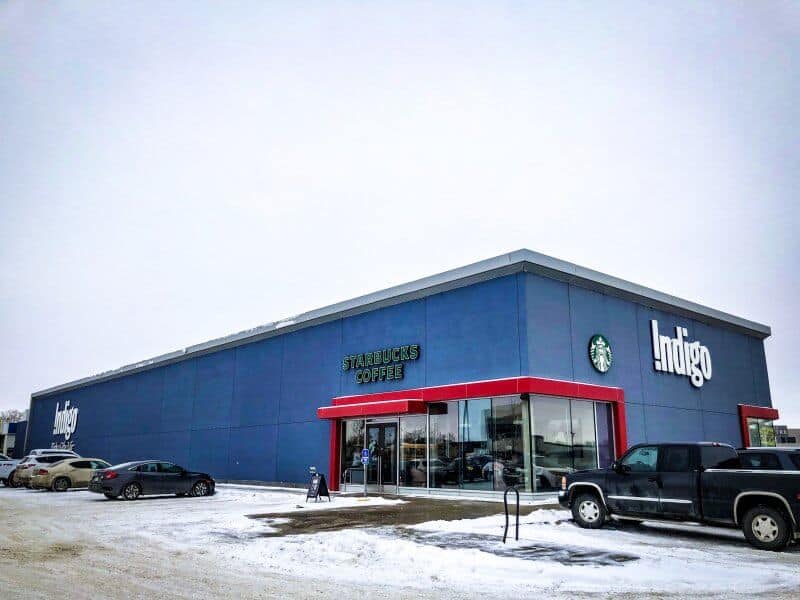 A small Starbucks inside the Indigo in Saskatoon, where we first met ten years ago.

John Himpe was always a storyteller. He had a way with words and a talent for capturing your interest. He had a long career in broadcasting, including television and radio, throughout Saskatchewan and Alberta. His former colleagues and long-time friends have done excellent write-ups. They do a better job of describing the broadcasting world and its impact. 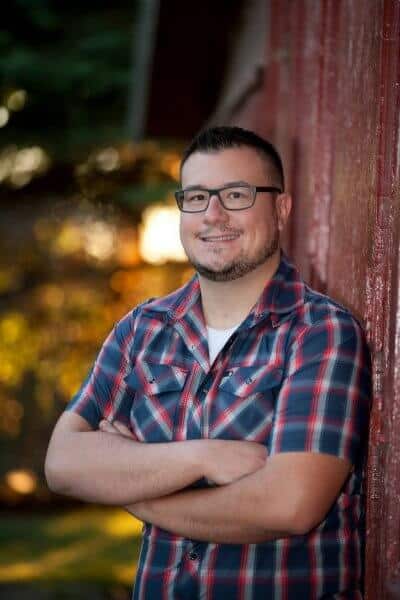 Once I finished University in 2010, John wanted to celebrate my achievement. I got a BSc. in Computer Science, for those of you wondering. He took me on my first trip to Walt Disney World in 2010. Growing up, we never had the means to travel, so visiting a Disney Park was never on my radar.

After that first trip, like many others, I instantly fell in love. Over the years, we travelled to Walt Disney World multiple times, Disneyland Resort, and Disneyland Paris. I wasn’t a writer by trade, but I began to chronicle our Disney trips on a blog titled “Fat Hobbit.”

I recall one day I told him, “You know, you look like that kid from UP.” He thought it was the most hilarious thing he’d ever heard, and it stuck. I’ll never forget his adorable wheezing and crying laugh when he saw the resemblance. 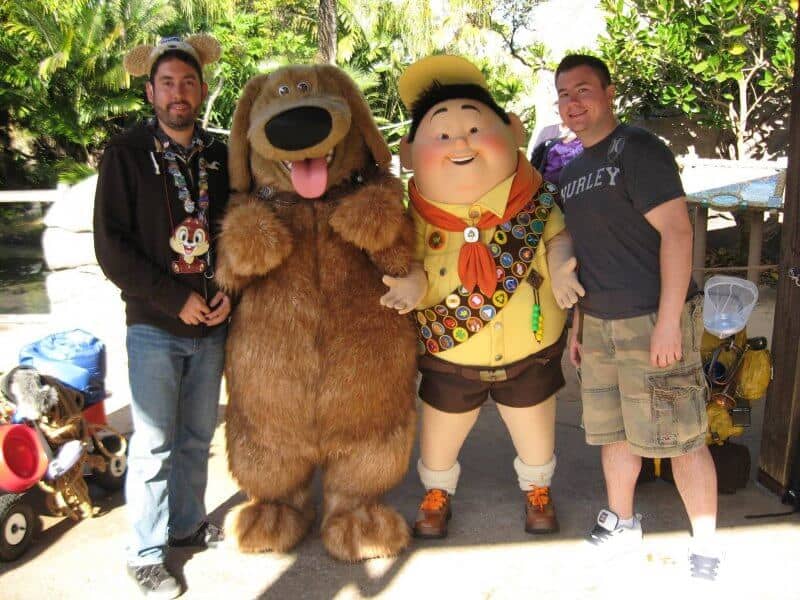 One of our many trips to Walt Disney World

Both John and I were always planning the next trip right after the last one finished. Most of you reading this have done the same thing. I know you have. John was constantly pushing me to write and create. He knew the importance of telling a story.

In 2013, he and I made the difficult decision to move away from each other temporarily. He was offered what was his dream job in Regina, Saskatchewan. There were no jobs for me, which made it difficult for me to follow. After lengthy discussions, we came up with a plan for me to spend a year in Japan while he was in a different city. One year later, we’d re-evaluate. 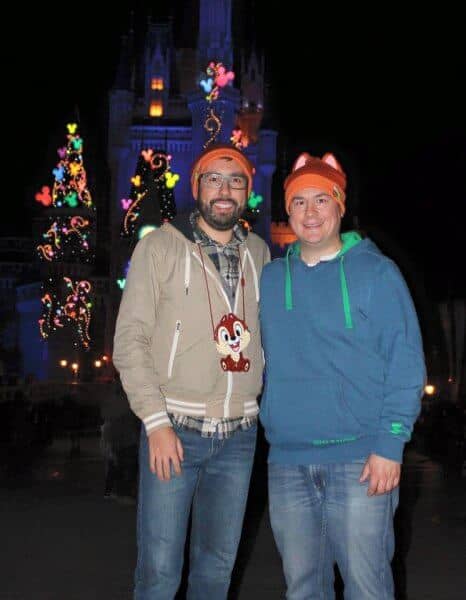 Our first trip to Tokyo Disneyland in 2013

Then in November of that year, I made a move to Tokyo, Japan. John visited just a week after I moved there. That’s when we crossed two more Disney Parks off our list. This was during the 30th Anniversary, and Happiness is Here was a brand-new parade. During this time, I started blogging more about Tokyo Disney Resort and changed the name from “Fat Hobbit” to “TDR Explorer.”

In early 2015, I started to discuss finishing up in Japan and coming home with John. Fate would have it that he was suddenly let go from his job in Regina. This threw our lives up in the air.

One of John’s dreams was to travel the world and tell stories. This was a topic we’d discussed many times. Then in late 2015, he created a podcast, blog, and YouTube Channel titled “Gone John.” He used Japan as a home base, and I saw him every few months (we still talked every day, even if that meant using terrible wi-fi in a hostel in Vietnam). He even got to interview Matthew Kepnes of Nomadic Matt.

For the first time in my adult life, I’ve been confronted with a blank canvas. There is literally nothing staring back at me. It’s an opportunity we don’t get often in life, and is one I don’t want to squander.

In early 2016, he and I took our first trip together to Hong Kong Disneyland to finish off his travels. That was the last Disney Park on the list (Shanghai Disneyland wasn’t open yet). There’s something special about travelling to someplace new, getting lost, and finding out you booked a horrible hotel in the middle of Hong Kong (it was so bad we forgot the name). Don’t worry, and we moved to Disney’s Hollywood Hotel when we had days at the Park.

A friend of mine in Canada asked tongue in cheek if streamers and confetti exploded as we walked through the gate. They didn’t. But, as the turnstile made that click-click-click-click sound we all know, a smile grew across my face and a tear crept out of the corner of my eye. We had done it. We joined a small, but passionate, group of Disney fans. 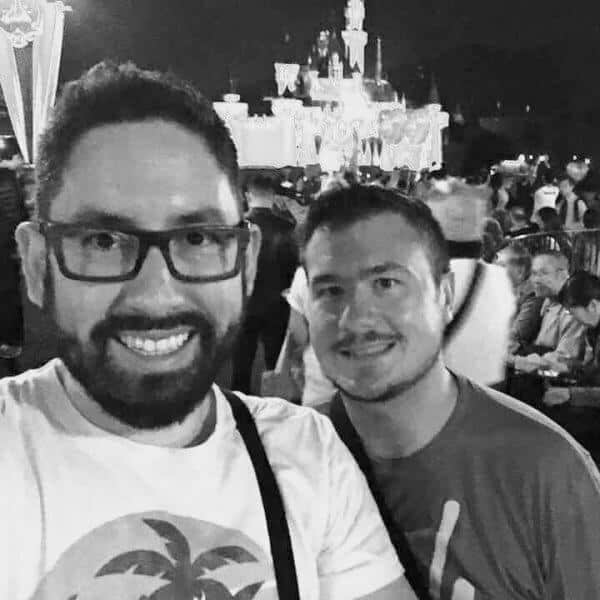 Once his travels were complete, John headed back to Canada. He was editing our podcast, videos, and blog posts by this point. I learned a ton from his endless knowledge on how to craft a story from nothing. We both decided that it was best I stayed in Japan because Shanghai Disneyland was opening soon, and the website was still growing. We would figure out what to do once he was back in Canada.

Every day when we talked, he would ask me, “When can I edit the next video? I have some ideas you can try.” He was constantly pushing me to become better than I was the day before, regardless of whether I wanted to or not (I’m pretty stubborn). He saw the impact TDR Explorer had and did everything he could to help grow our reach every day. 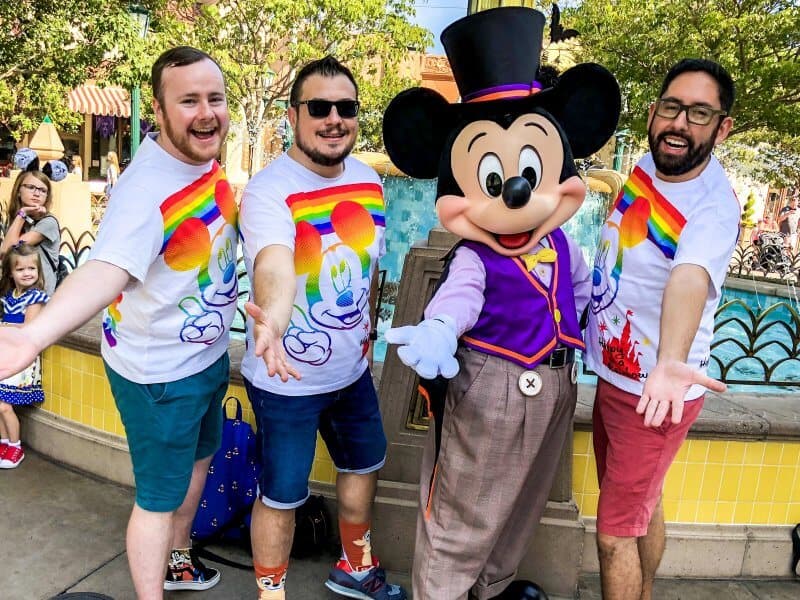 Just as I was looking at where to go next, in fall 2016, I was fired from my web development job in Tokyo. That was another wrench in our plans to move back together. John told me that I couldn’t leave Japan yet, because what I was doing wasn’t finished yet. We continued to push the website forward.

John took every opportunity to let me know how immensely proud he was of our creation. John’s co-workers, friends, & family have told me repeatedly that John spoke of me constantly. 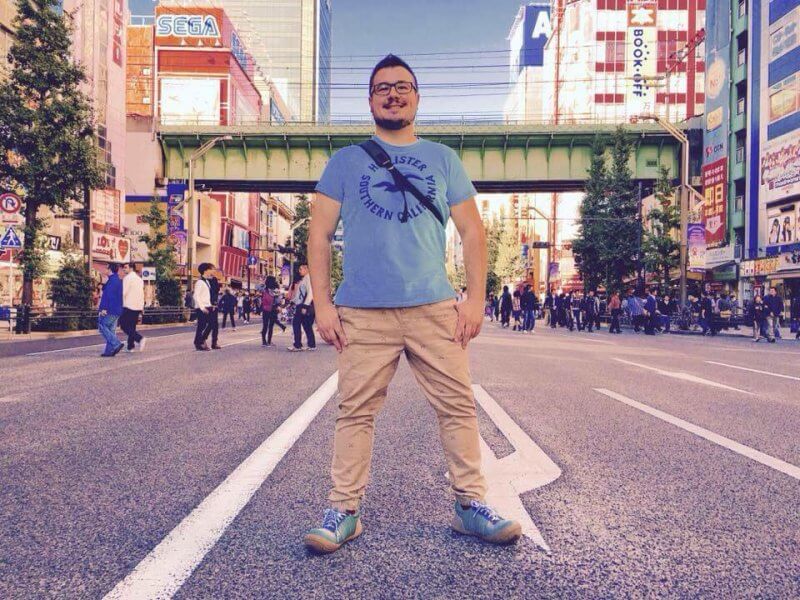 John was more than eager to edit all the videos and podcasts. I’d get random clips sent to me in the middle of the night of my bloopers. He’d call me randomly in tears some days because he was laughing so hard at the outtakes. He told me after every video that he loved piecing it together to tell a story. He’d also send voice clips of the podcast that sound horrible out of context. There was never a shortage of laughter.

John and I always saw each other as much as possible. Even when we couldn’t physically be together, we’d talk every day. He loved coming to Japan to experience the different seasons. His absolute favourite thing to do was sit and soak at the onsen.

On his last trip to Japan, all he wanted to do was his favourite activities. We did just that. He was happy. 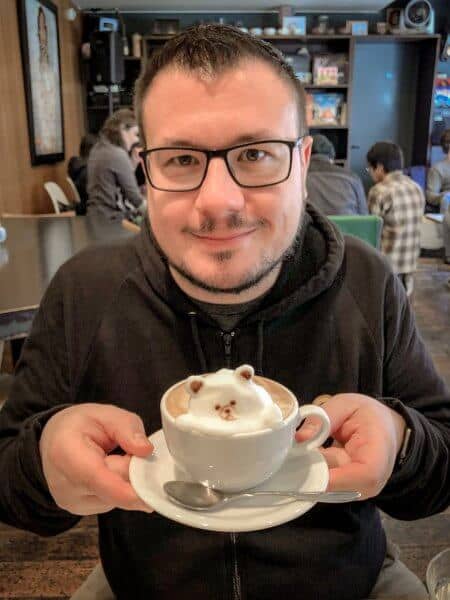 John enjoying a latte with his favourite bear, Brown from LINE Friends, at the Reissue Cafe in Tokyo

John Himpe is an integral part of what this website has become. Without him and his experience, dedication, and love, none of this would exist. TDR Explorer is because of John Himpe. Not only that, he was my partner in travel, adventures, and life. We shared so much in our ten years together, more than I could have imagined. 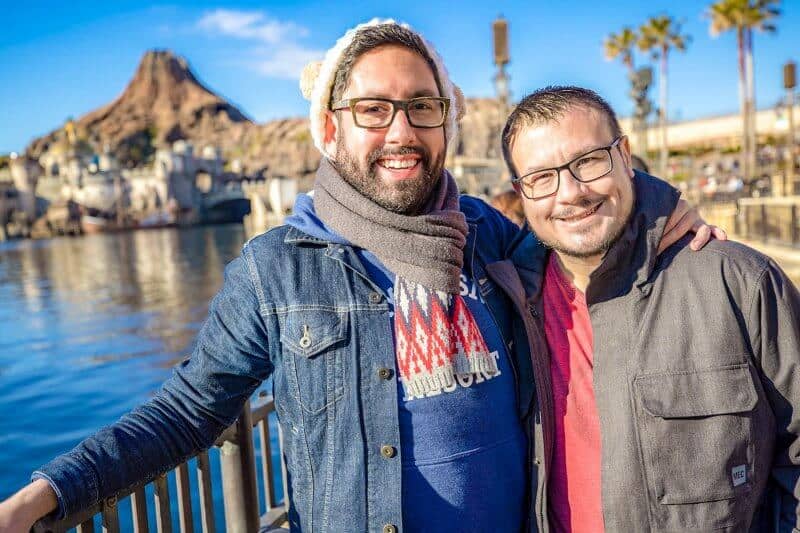 As I write this, I’m in that Starbucks where he and I had our first date, almost ten years ago. Who knew back then a simple “yes” would not only change our lives but thousands of others.

I’ve asked myself if this was the time to finish TDR Explorer. The thought of continuing this journey without him breaks my heart. But I know John wouldn’t want me to. He’d like me to continue what he and I created together.

While our chapter together is over, there are many more stories. I’ll continue creating and telling these stories when I’m ready. My heart is in pieces.

Thank you for all the adventures, John ❤️ Until next time, Explorer. I love you more.

If ever there is tomorrow when we’re not together… there is something you must always remember. You are braver than you believe, stronger than you seem, and smarter than you think. But the most important thing is, even if we’re apart… I’ll always be with you. 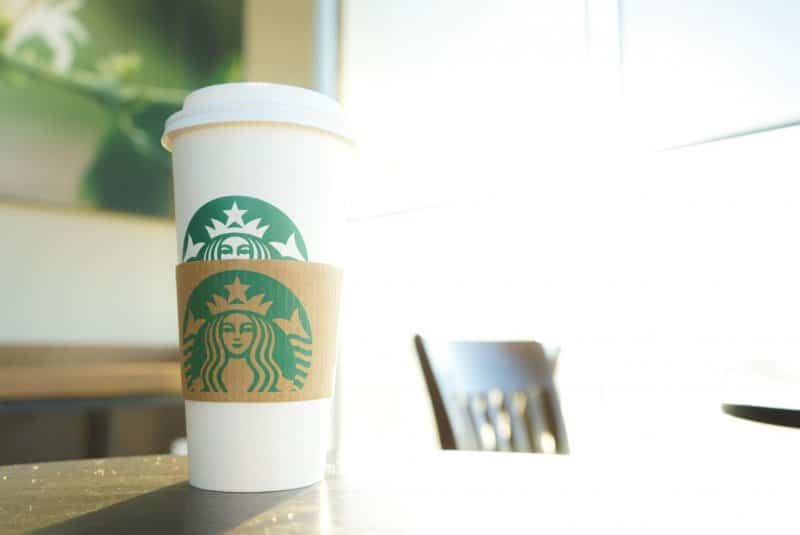 John’s Venti Americano at our Starbucks in Saskatoon, Saskatchewan

I’ve had many Explorers ask how they can help during this difficult time. One way is to give to the John Himpe Memorial Award at SAIT in Calgary, Alberta. John graduated from their excellent Broadcast News program in 2000. This was one of the significant stepping-stones for launching his career in media.

You can also help the website directly by donating through PayPal or contributing to us on Patreon.

I can’t thank you enough for your continued support as always, Explorers. Thank you.