Our last day at the Disneyland Resort, it’s always sad when the last day comes but we were ending the trip off with a bang, World of Color in the evening. 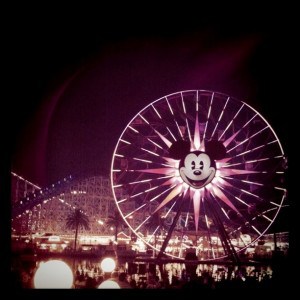 Today we were spending the whole day in Disney California Adventure and just taking it easy. First up was Toy Story Mania and I kicked John’s butt once again. He did get really close in the last round to catching up to me. Better luck next time!

We skipped breakfast at the hotel so we needed to eat. The wait for Toy Story made us pretty hungry. We quickly grabbed Fast Passes for Soarin’ then headed to Pacific Warf and got breakfast. i had a breakfast bowl, which had bacon and eggs in a bread bowl. The bread was a bit tough. 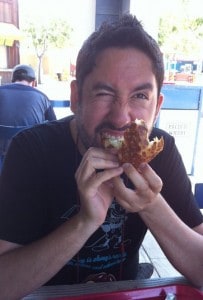 It was pretty tough, but delicious.

By the time we were finished eating our Fast Pass was up for Soarin’. We quickly walked over there and soared over California. I don’t think you can ever get sick of the smell of oranges. Once we were safe and sound on the ground we grabbed Fast Passes for Grizzly River Run. The Fast Pass line for World of Color still had passes for the first show of the evening at this point, it was about 11:30am by this point.

Next up was Muppets 3D and Monster’s Inc. Then after that was …. *gulp* Hollywood Tower of Terror. Anyone that has been on this with me knows I screaming for the duration of the ride. I really dislike the free falling feeling with a passion. John really wanted to ride it and I have yet to ride this one (I rode the TTT in Walt Disney World and Tokyo DisneySea). Apparently I was laughing the entire time the ride was happening. All I remember was the doors of the elevator closing and I immediately freaked myself out. Maybe I laugh to help with couping how freaked out I am. Either way we had a lot of fun and got a lovely photo of my “GET ME OFF OF THIS” face. 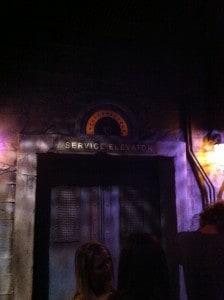 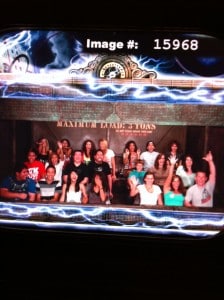 Next we grabbed a Fast Pass for Calfornia Screamin’ and headed over to Grizzly River Run since our Fast Passes were ready. While going by we noticed that Ariel’s Undersea Adventure was closed and sadly it stayed closed the rest of the day.

Thankfully this time on Grizzly River Run I didn’t get soaked from head to toe, which is always a bonus. To celebrate being dry we got ourselves some Ice Cream in Paradise Pier. Duffy wanted some Ice Cream but I told him that stuff bears can’t eat Ice Cream. What a crazy bear.

Now it was time for California Screamin, which was a screamin’ good time (see what I did there?). Once we were done with that I was a bit distraught at the fact I wouldn’t be riding Ariel’s Undersea Adventure again so I decided to buy some limited edition pins. I got a set of 4 for $40. There was a $114 set that came with three extra pins in a nice book. But I wasn’t willing to spend that much money on pins. Since it was only an extra three. If it was maybe $80-90 I would have went for it. 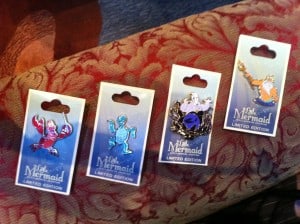 Took some time to head to the Grand Californian to take a look around and to get out of the heat. On the way there I had some more comments on my Chip Lanyard, they really wanted to get one but told them they are only in Tokyo Disneyland.

For lunch we decided on the Rainforest Cafe. The food was very generic and tasted as if it was taken out of the freezer and heated in the microwave. Which is probably what they did. It wasn’t all bad though, our waitress was extremely friendly and polite.

Once we headed back to the park we went to Soarin’ with our fast passes before we headed for dinner. Dinner was at the Wine Country for our World of Color FastPasses. The meal was outstanding! The service was just as excellent. Sadly our waiter did mess up our FastPasses and gave us the passes for the early show and we wanted the late show. We didn’t want to cause a fuss so we quickly paid and headed over to Paradise Pier. 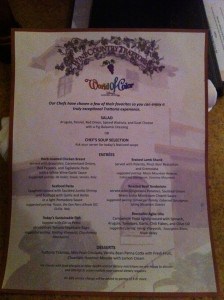 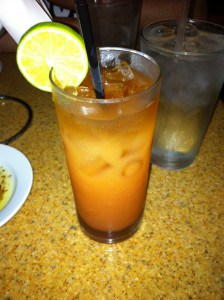 My fancy Captain Morgan's Drink. It was delicious! 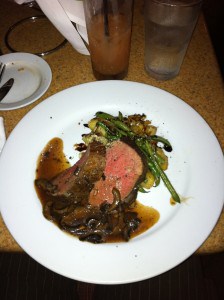 The main course! It was tender and probably the best I've ever had! 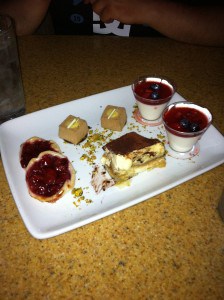 Our dessert plate. Everything on here was fantastic.

As we were walking to Paradise Pier we passed a group of 20-somethings and one of them sneezed then everyone in their group froze in place. It was a flash mob! They all froze in place for about 30 seconds. It was rather strange and everyone around was confused as to what was going on. After the 30 seconds, they continued walking as if nothing happened. Never a dull moment in Disneyland!

We got to our section at World of Color and we were right in the middle. The view was fantastic and luckily I was one of the taller people so anyone in front of me I could see over them easily. I’m only 5’11” which isn’t overly tall but everyone else around me was pretty short.

The show was absoultely fantastic, they changed a couple of things since the last time I saw it back in March. They removed the TRON: Legacy portion and extended the Pirates part. It has to be one of my favorite Disney shows ever. It’s something that can’t be missed if you are a visiting the parks for the first time.

Once the show was finished we decided to walk through elecTRONica one last time before we headed over to Disneyland for a few minutes. Once we got to Disneyland we picked up a few gifts from the Starcade and called it a night.

Another Disney trip is in the books! We had an absolute blast. The new attractions were superb and did not dissappoint. If you’re planning on visiting these new attractions this summer make sure you get there early! I’m already counting the days until we head back there.

I hope you all enjoyed this trip report and there will be plenty more to come in the future! My next planned trip is a full week in Walt Disney World with my family in September. It’s our first family trip and it’s going to be a blast! Make sure to check back for my pre-trip report in the next coming weeks.

See you again soon and have a magical day!