Hey, fellow Explorers! If you’ve been following along, you’ve probably noticed that I just finished writing about our winter experience—aka trip report—a few weeks ago, and now we’re back with another experience to share with you: the Mystic Manor Exploration Tour.

This was a limited-time guided tour for Magic Access Members (backstage tour, if you want to call it that) through Mystic Manor to learn more about the history of Lord Henry Mystic, the mansion itself, the attraction, and a photo taken with the adorable Albert!

Mystic Manor is one of my personal favourite attractions out of all the Disney parks. The story, technology, presentation, and execution create an unforgettable experience. If you have a Disney Bucket List, go find it and write this in there right now. I’ll wait.

This write-up contains minor spoilers, so read at your own discretion. No photos or video were allowed during the tour except for the photos with Albert taken by the Cast Members at the end of the tour. Other photos shown here are ones I took while NOT on the tour. (These are used mainly to break up the wall of text.) 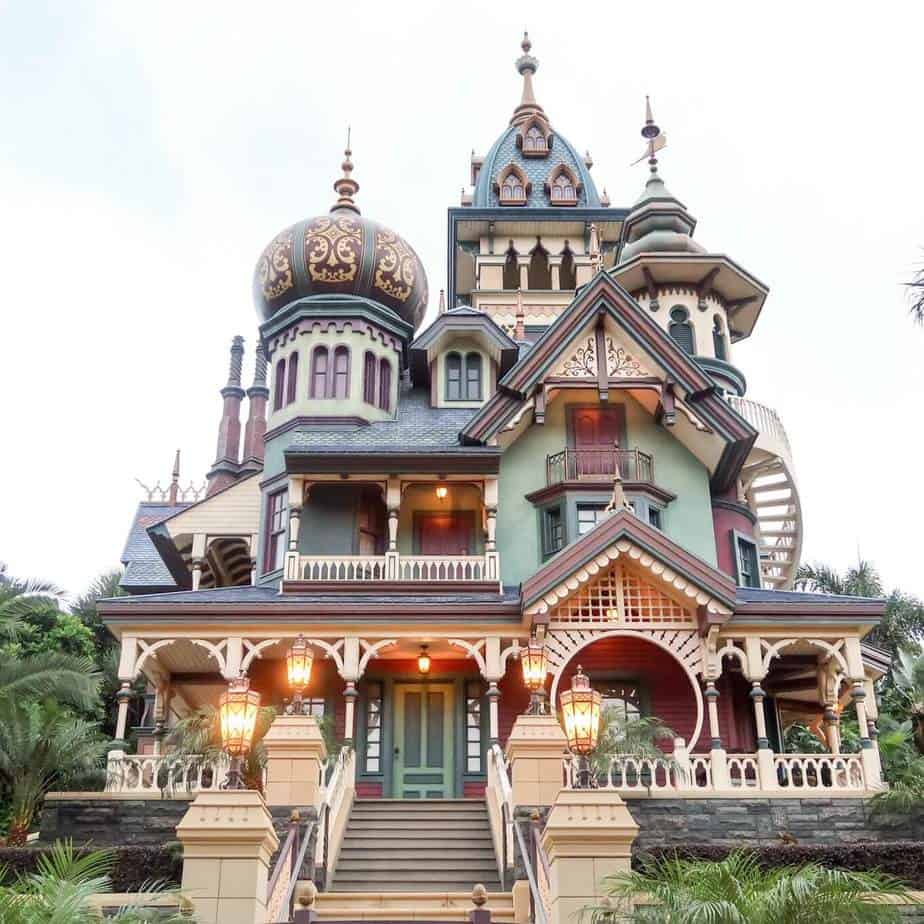 On a normal day, Mystic Point (along with Grizzly Gulch and Toy Story Land) close earlier than the rest of the park. But since we were part of the tour, we got to hang around the area after it closed. A Cast Member took our names down (along with Magic Access Passes).

The main tour was in Cantonese only (we knew this going in), but we were fortunate enough to have other Cast Members on the tour who translated as much as they could. We went in knowing we may not understand most of the tour and were okay with it. A huge thank you to the Cast Members for explaining as much as possible in English for us. From what I could tell, we were the only non-Cantonese speakers on the tour.

The two Cast Members who led the tour were sent by Lord Henry Mystic himself, who bestowed upon them the honour of showing us around Mystic Manor, as he couldn’t make it that night. Our tour began outside Mystic Manor, worked its way through the queue, and then into each room in the attraction.

I am not the best person for remembering specific details about anything, and so I know I’ll botch a lot of what was explained.  I’ll do my best to recall what I remember. What did stick, however, were all the Hidden Mickeys pointed out, and I’ll explain the Mystic Manor Hidden Mickeys below in detail, so you have something to reference.

One thing that I always wondered was how the trackless ride vehicles were stored. Were they all put away somewhere or what? I am not sure if the ride vehicles were set this way for the tour or if this is normal, but they stretched across the entire attraction, which was neat, but also eerie in a way.

The first room, Acquisitions and Cataloguing, all I recall is the Hidden Mickey that’s on the left side of the room when you first enter. This is where you first meet Albert and Lord Henry Mystic and the shenanigans begin.

While walking through the various rooms of Mystic Manor, our guides explained references to other Disney attractions. The first long hallway, Mediterranean Antiquities, with its paintings and artifacts is a callback to the Haunted Mansion with the Medusa portrait and statue heads who follow your every move. The statue heads are easy to miss since the ride vehicle spins and you face the opposite direction while moving past.

Throughout the tour, our guides gave out stickers to guests who answered trivia questions or found a Hidden Mickey. A lot of it happened rather quick (in Cantonese), so we missed a lot of it. We did, however, find a couple of the Hidden Mickeys along the way and scored stickers! 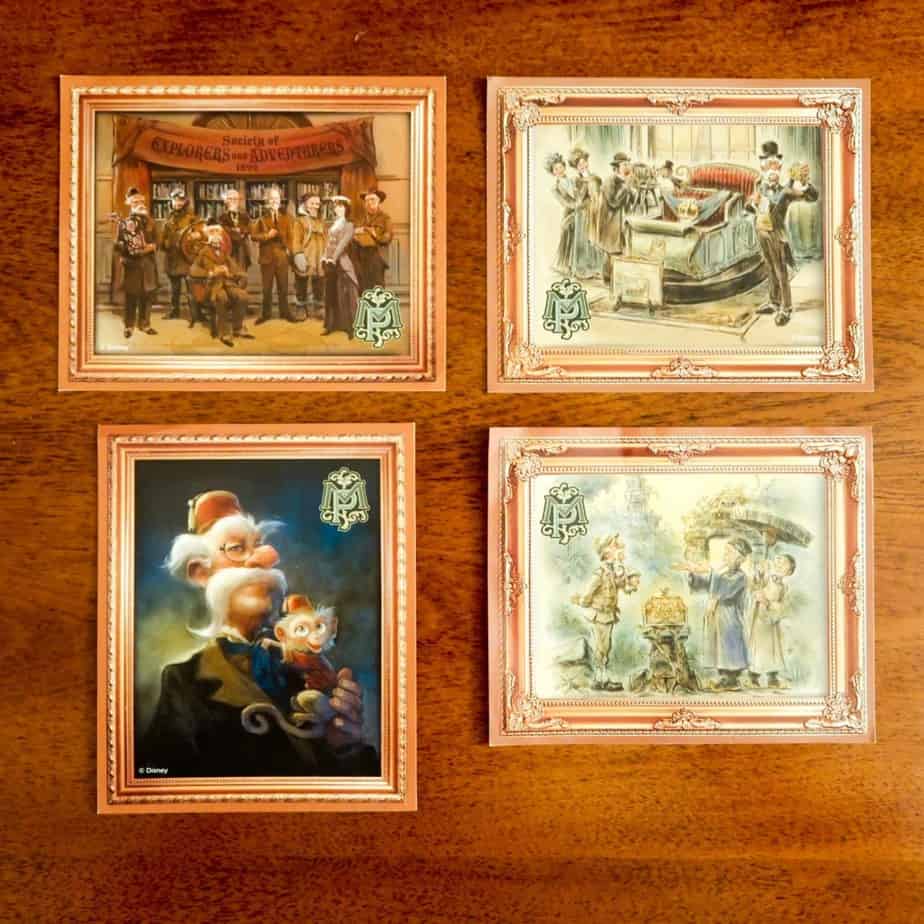 In the Arms & Armour room is a large display of spears. Each of them had a weakness and strength, which Lord Henry Mystic knew all of them by heart. The one in the top-middle was the ideal weapon, but also the most difficult to create. This room had a few Hidden Mickeys, some of which were hard to spot.

The mummy in the Egyptian Antiquities room is special because the “mummy” lived over 100 years, which was rare for people at the time. 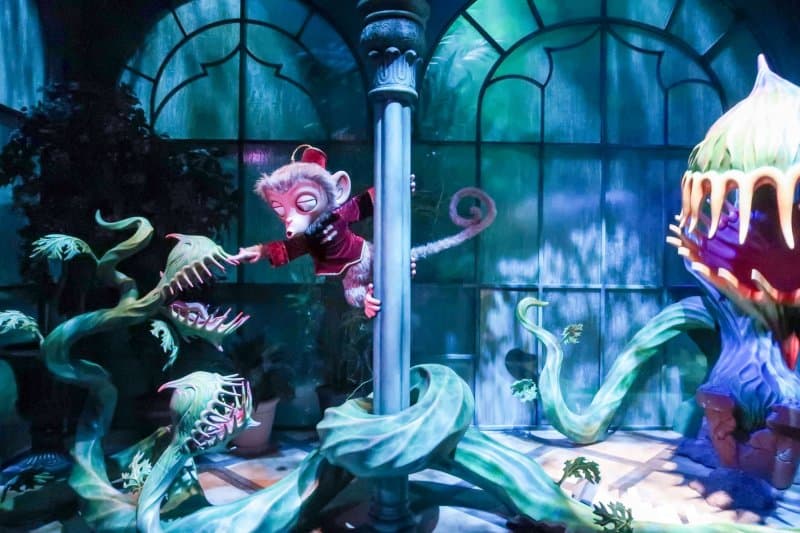 At the end, you return to the Acquisitions and Cataloguing room (which is identical to the first room you enter) where there are a number of artifacts waiting for categorization; a lot of which are from different members of S.E.A. One of these includes Danny Elfman. Then along the left-hand wall are drawers with name tags of the brilliant Imagineers who worked on the attraction. This is where we got our photos taken, too! 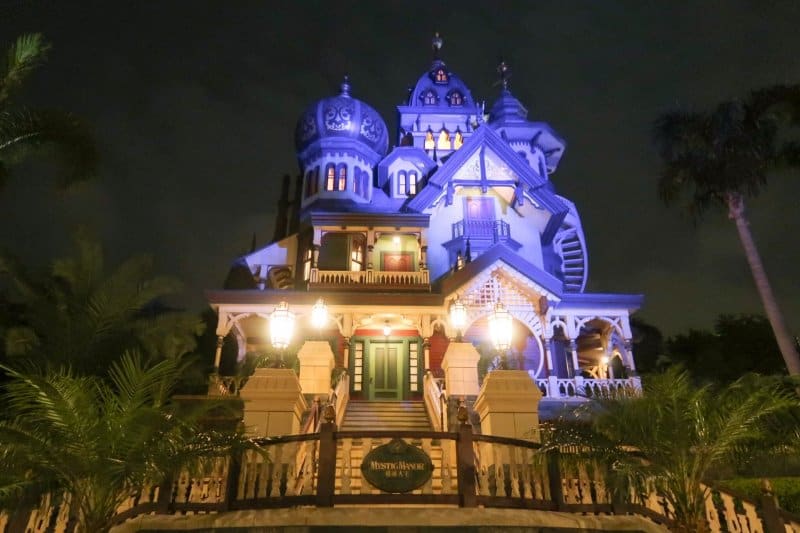 Throughout the tour, we learned about a number of Hidden Mickeys throughout the attraction. A few of them you’d see from the ride vehicle, while a couple you’d never see unless someone pointed them out to you.

I mentioned the Hidden Mickeys above, but this list here is for your own reference so you can take a look and see if you can find them! This is not an exhaustive list, so there’s a chance these are not all of them. If you know of any, let us know in the comments.

Right-hand side when you’re facing Albert, the cabinet with the jewels hanging out have a necklace in the shape of Mickey. Since the first and last rooms of the attraction are identical (to my knowledge) they both have the same Hidden Mickey. This one is easy to find.

This is the hardest one to find. It’s in the blade of the axe just below Albert, where he’s pinned to the wall. This is hard to spot since you’re moving rather quickly.

The enthusiastic Cast Members made the entire experience memorable (even if we didn’t understand everything). It’s not every day you have the chance to walk through one of the best Disney attractions (and my personal favourite).

My favourite aspect was all the various Hidden Mickeys and the nods to other Disney attractions. As mentioned, I am not the best at recalling details on things related to backstories, so if there was ever a written test I’d embarrass myself. But if you have an excellent memory, then this is a goldmine. 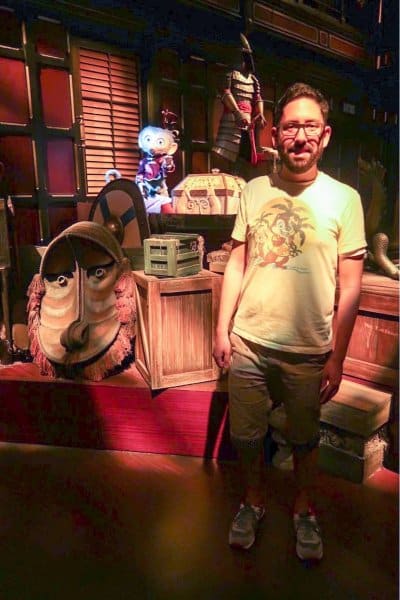 A huge thank you to the Cast Members who did their best to translate into English for us on the fly.

If there’s ever another tour, there’s no doubt in my mind I’d do it again. I do just want to note: I am not aware if/when another tour is offered for Mystic Manor.

To learn more about the Disney Parks in Asia, sign up for our weekly newsletter to get the best in advice and updates sent right to your inbox!