Happy New Year — あけましておめでとうございます！ 2017 is here and Tokyo Disney Resort wastes no time to get the year started off right.

First, was the New Year’s Eve Party at both Tokyo Disneyland & Tokyo DisneySea (which is a hard ticketed event won by lottery or be a guest at the Disney or Official Hotels on the night of the 31st). I did the party back in 2014/2015 but was not fortunate enough to win the lottery this year. But that doesn’t stop me from watching the countdown on YouTube! 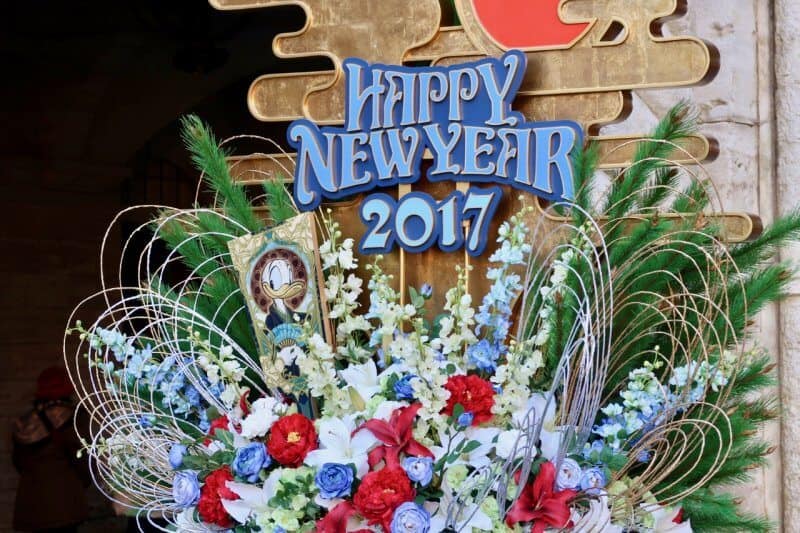 In lieu of attending the party, I took part in the New Year’s Event on January 1, 2017. This short event runs from January 1 until January 5, 2017. Which is the shortest event all year. Even with this quick event, there’s enough see, eat, and buy to make a visit for the day worth it. Buy your tickets here!

Here’s a mini report of my day at both Tokyo Disneyland & Tokyo DisneySea for New Year’s 2017! Also, don’t forget to read our guide to New Years at Tokyo Disney Resort. 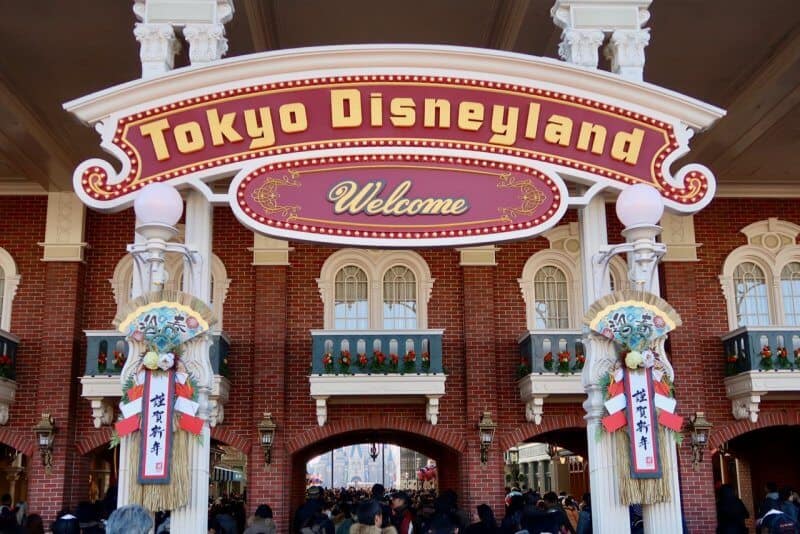 The parks re-opened at 09:00 after closing at 07:00 (the party ran until then). I got there just before park opening at Disneyland and the crowds were rather heavy. Being at Tokyo Disneyland for the first day of the year is always a treat. Before I even got to the parks, I noticed a ton of people leaving the resort area — my educated guess is they were at the New Year’s Party. 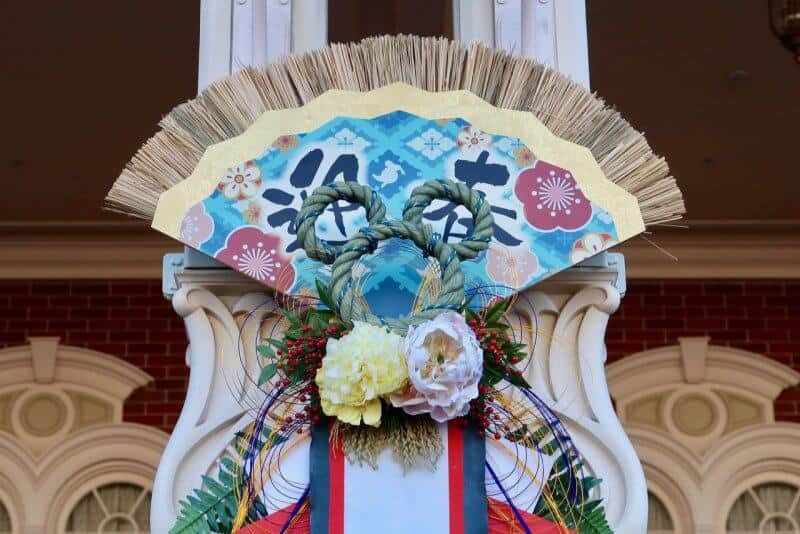 While the crowd was heavy, it wasn’t anywhere near capacity. Just that first rush at park open makes it congested. Once the park opened it was nothing out of the ordinary. A lot of crowding in front of the entrance to the World Bazaar, since this is the only place where decorations are for the event.

Tons of people waiting to get inside Tokyo Disneyland for the first day of New Years. pic.twitter.com/auHX5ZLpcA

The weather was cool — about 13°C (57°F) for most of the day. It cooled down a lot in the evening. We’re about to get into the coldest time of the year for the Tokyo/Chiba area.

The biggest reason to visit on the first day is to see the New Year’s Greeting. This is a short parade where the new Ambassador of Tokyo Disney Resort makes an appearance — Nozomi Fukumoto (福本望) for 2017/2018 — and they are joined by Mickey and friends in traditional Japanese kimonos. This year is the “Year of the Rooster“, so Donald and Daisy lead the parade this year! 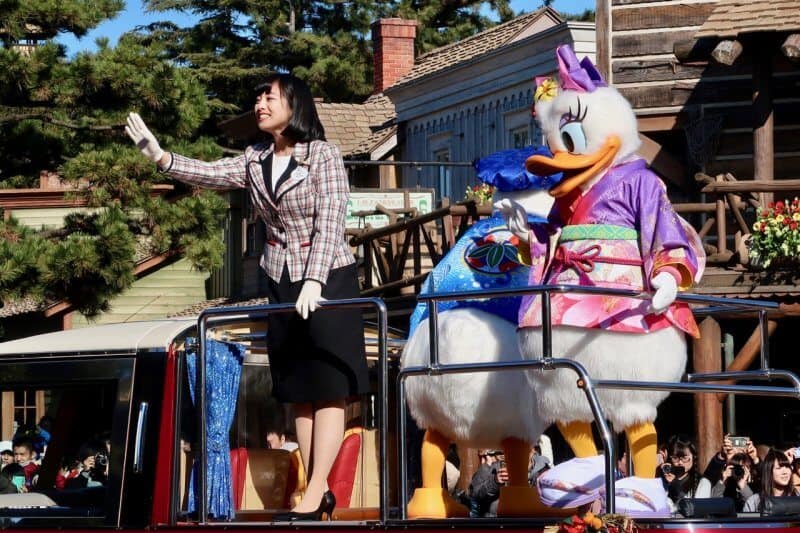 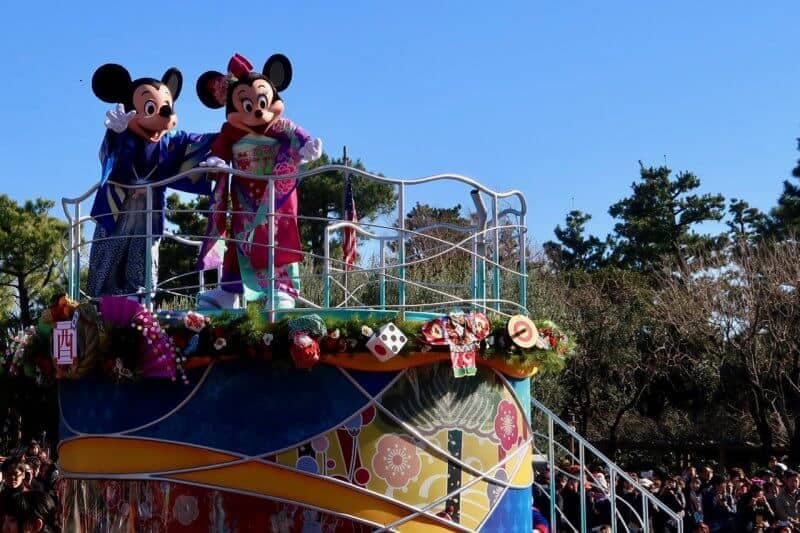 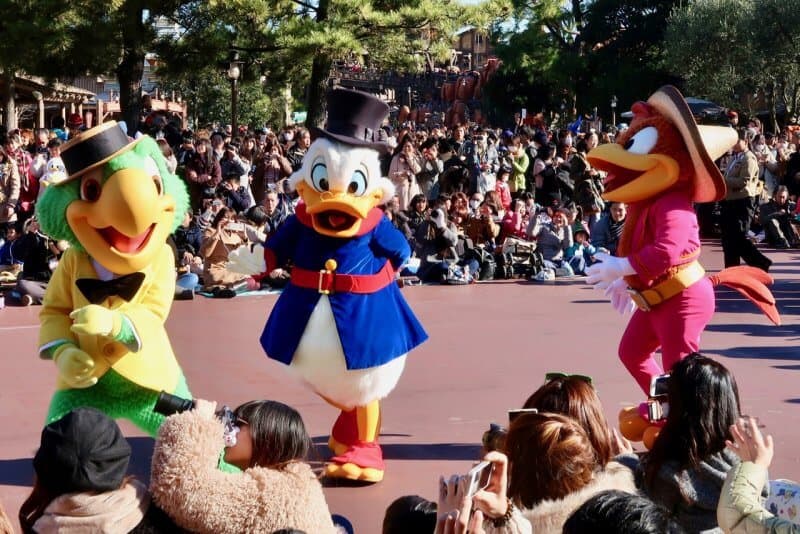 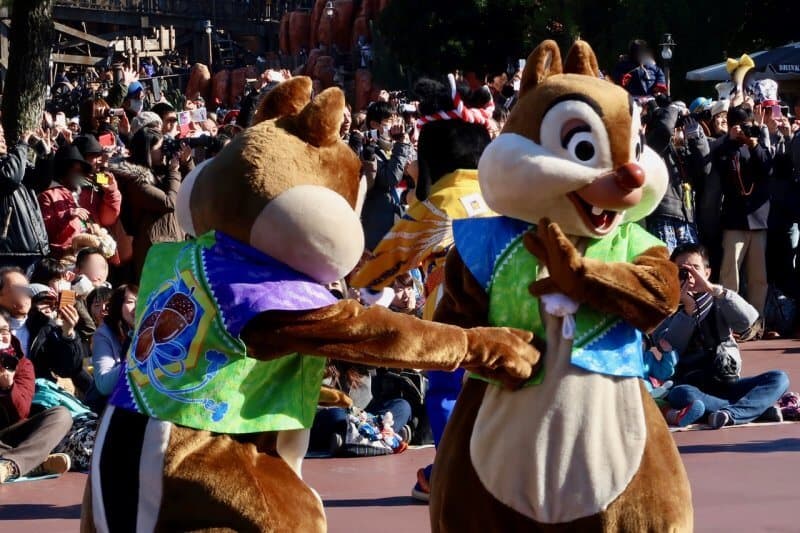 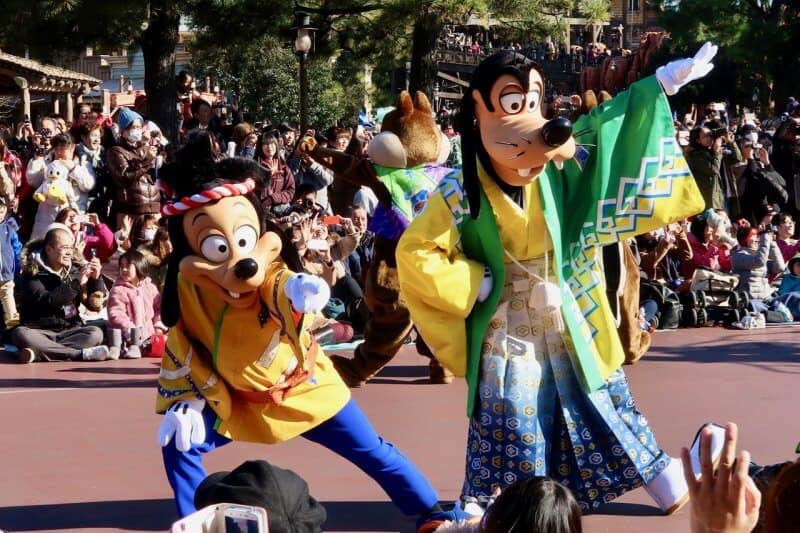 I am more of a parade/show person, so the chance to see limited time shows like this bring me a ton of joy. I got myself comfy in Westernland and waited an hour for the show. I have come to realise that after being a local to the parks here for almost 4 years, that I don’t mind waiting for shows — I find it relaxing.

Of course, I had to head over to Tokyo DisneySea for their greeting too! If I had to choose between the two (they are essentially the same anyway), I would pick Tokyo Disneyland because it feels more intimate. The greeting at DisneySea is a quick zip around the Mediterranean Harbor a couple of times. Which is a bit hard to see from afar. While the one at Disneyland you see everyone up close if you are along the parade route. 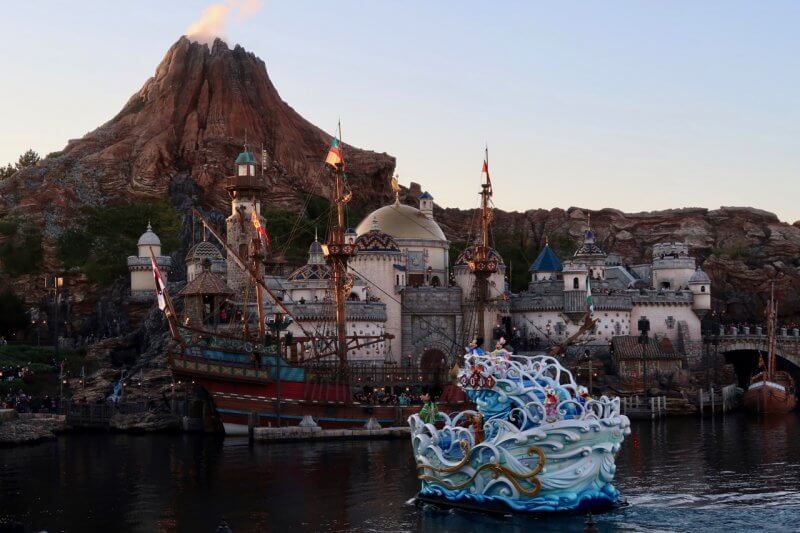 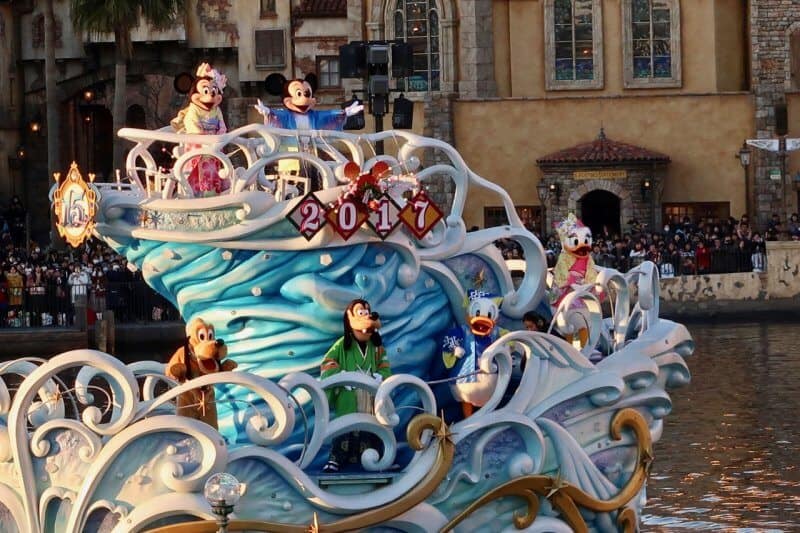 Either way, I enjoy both and I love the chance to see everyone in their traditional outfits for the season. 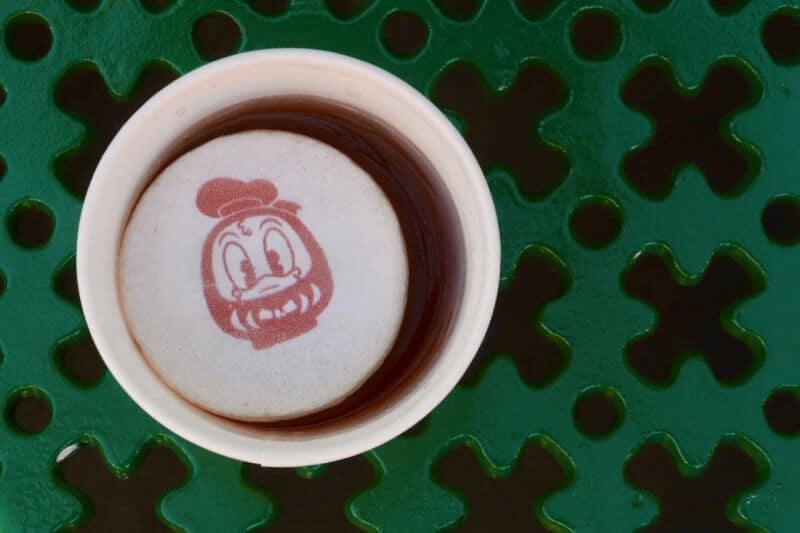 Any event at the resort is never complete without limited time food and snacks. My favourite is the おしるこ (oshiruko) which is sweet red bean soup. It comes with mochi (pounded rice) which floats at the top and this year has an adorable design of Donald. I recommend giving this a try if you are able to.

Next is the dessert with souvenir cup. Now, I am not one to opt for these but the cup is too beautiful to pass up. It’s perfect for tea and I am a sucker for anything “limited”. The dessert is a soybean (kinako) mousse, which is not too sweet and I quite enjoy it. 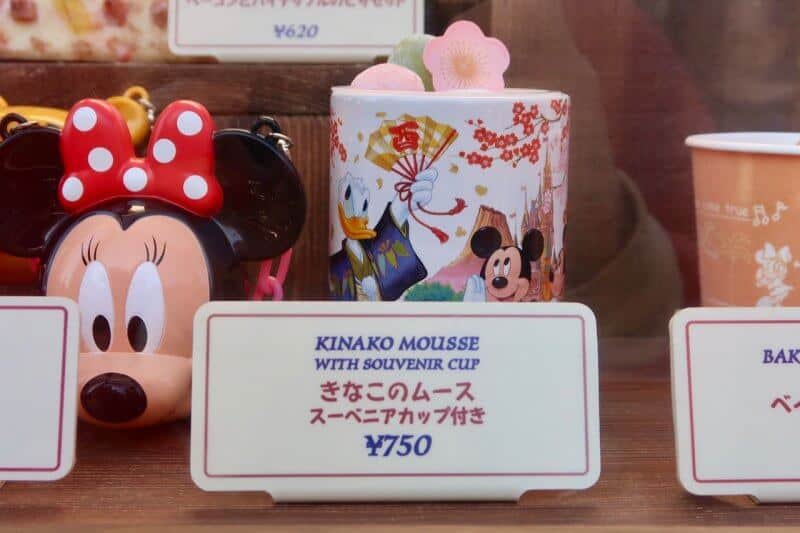 My favourite thing was the New Year’s Special Set at Restaurant Sakura in Tokyo DisneySea. This is a one-day only set for January 1. As most things, you needed to make a reservation for the restaurant well in advance — read our full dining guide to learn how to do this. The restaurant was booked solid for the day. 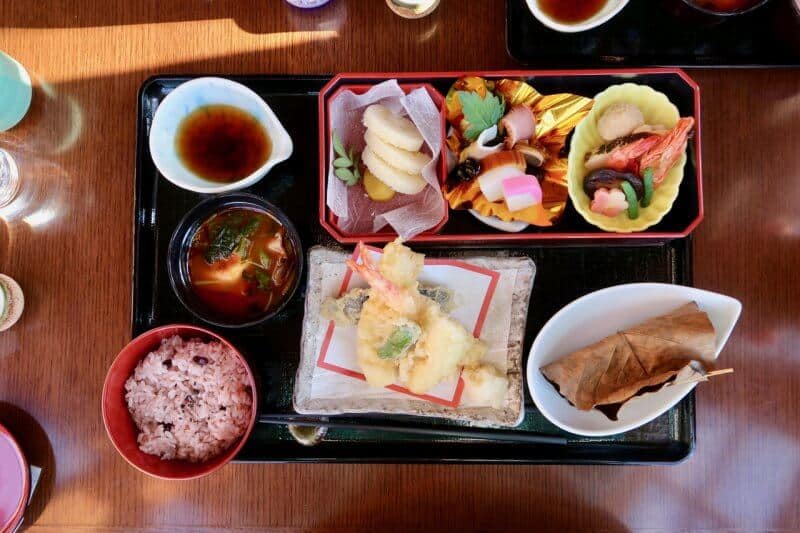 The set includes traditional Osechi (お節料理) — New Year’s food in a bento box called a jubako (重箱) — dessert, tea, and most importantly souvenir chopsticks. The entire set costs ¥3,300 (~$30 USD) and is worth it. The set looks stunning and tastes just as good. This is full of different types of seafood, so it depends on your tastes. 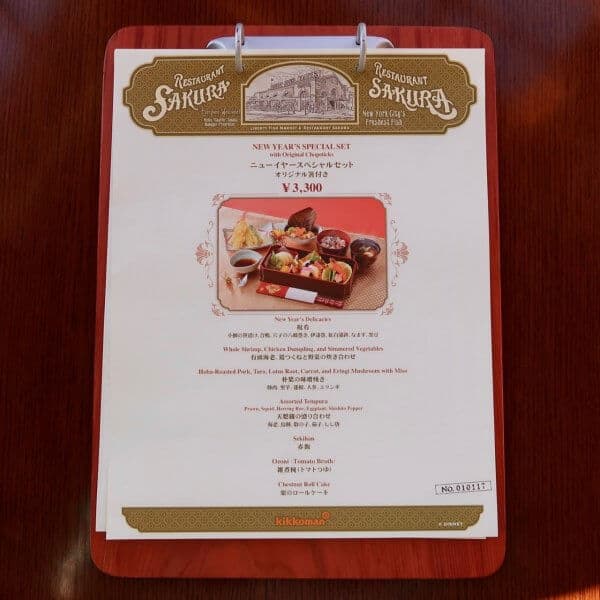 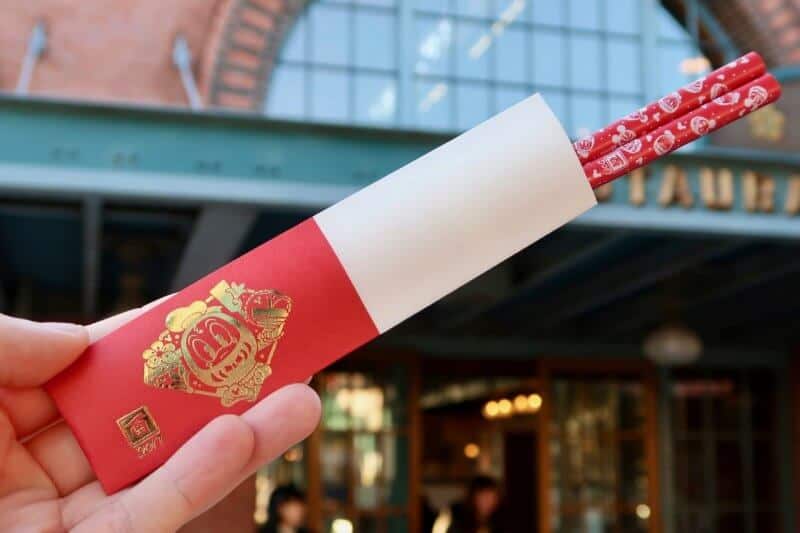 I’m quite happy with the chopsticks I got with my New Year’s Special Set at Restaurant Sakura at DisneySea ??? #tdr pic.twitter.com/aymBI6brPw 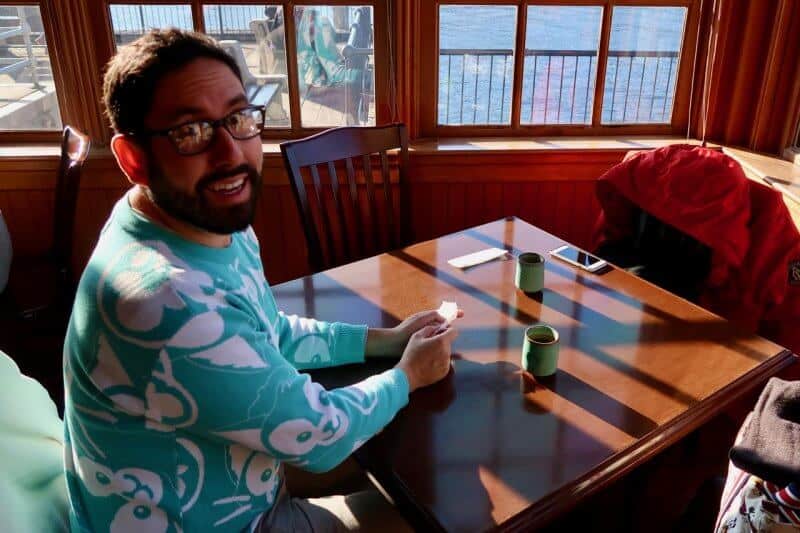 Comfortable weather, moderate crowds, delicious food, friends, and a beautiful view of Mt. Fuji from Tokyo DisneySea. I can’t think of a better way to spend the first day of 2017. Oh, and to top it all off we got lucky and won the lottery for Big Band Beat — which I have terrible luck winning!

2017 is off to a fantastic start and I cannot wait to help you all plan your trips to Tokyo Disney Resort this year! 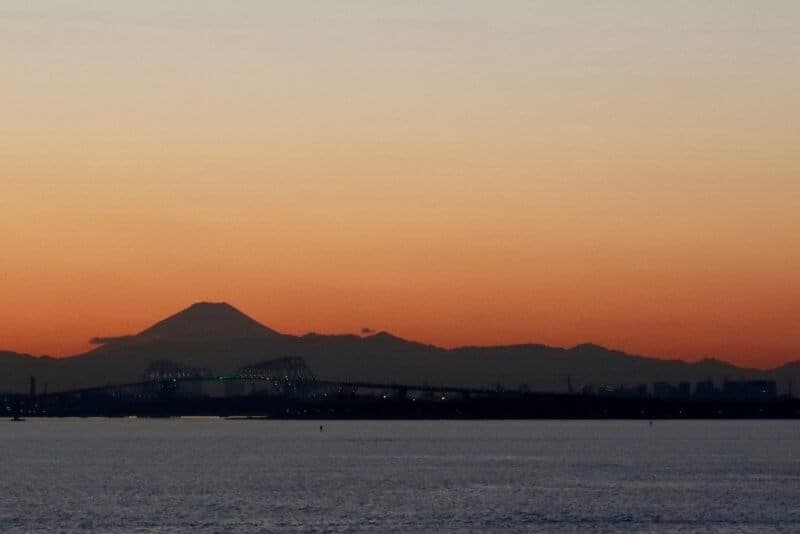