Hello all! Ted here, new to Fat Hobbit! Chris has let me write a few articles about Disney Cruise Lines so that you can get the best seafaring experience ever. Thanks Chris for the soapbox!

You’re curious about a Disney Cruise but you have a lot of questions: What’s the best ship to choose? Can adults survive on cruise ship full of kids? Can kids survive boredom while in the middle of the sea? Is it all burgers and chips dining? Where can I pet a dolphin? Stick with me, kid, I’ll show you the ropes!

First, I’m going to tell you about the basics: the “where”, the “how” and “how much?” and in future articles I’ll get to all these questions and more. So let’s get right to it, shall we? 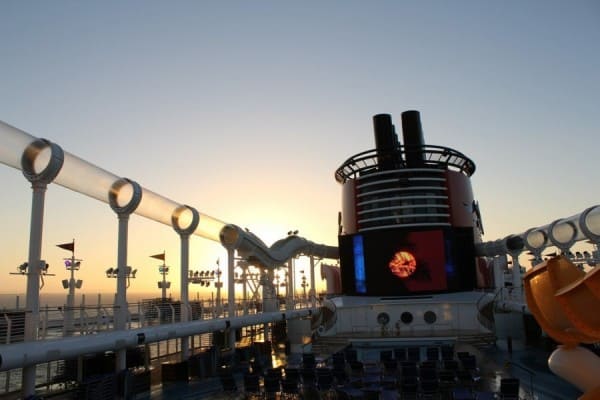 A rare moment when the AquaDuck is not in use!

Let’s start at an easy point: Where do you want to go? Disney has mirrored its itineraries with all the other major cruise lines out there, so there’s no real surprises in where they go. Currently Disney travels to Alaska, the California Coast, Bahamas, Canada, Caribbean, Europe, Hawaii, the Mexican Riviera, Europe and a Transatlantic cruise too. Their site can give you the rundown on each destination. Since every cruise line uses the same ports that can accommodate the big ships, there’s not much difference in terms of destinations between Disney and the other guys.

How does Disney compete in the cutthroat cruise business? Since they can’t offer any new destinations they have looked at their competition and did exactly the opposite. Instead of spending money on a bigger ship (like the gargantuan Allure of the Seas), they focused on customer service and guest experiences as drawing factors – both things they excel at. You might be enjoying the pool like on any other cruise ship, but suddenly Captain Hook and Smee come bounding ‘round the corner and stop to say Arrr! Or, you might just pass a princess on the running track! And no other cruise ship has a license to shoot fireworks at sea, just a little extra they do on Pirate Night. The ships redefine cruising by not going big, but going personal. 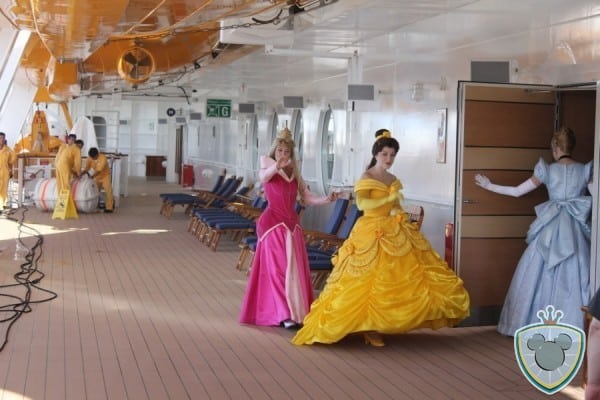 Late for a very important date

Disney’s trip search engine is pretty web savvy, but they’re a bit light on the ship tips. So what ship to choose? If you’re the type of Disney guest who chooses the “Best of the Best”, then you need to look into the Disney Fantasy, its newest ship launched this year. The Fantasy has learned from Disney’s three previous ship builds, tweaking and reworking public spaces and kids activities for larger volume and greater access. She has all the amenities of the previous ships plus a few extras, like revamping the dining show in Animator’s Palate , or slightly altered onboard activities (we’ll get to those in another post). These extras will cost you a little more too. Think of it like staying at The Grand Floridian as opposed to Riverside.

If you want “the Best” but don’t mind missing a few extra magical touches here and there, then look for cruises aboard the Disney Dream. When the Dream launched in 2011, it wowed travellers with an onboard water slide 15 decks above the water and interactive art that doubles as an onboard treasure hunt (these are on the Fantasy too, but have been updated). The Dream is priced slightly lower than the new Fantasy only because it runs 3 and 4 day cruises only, with one or two days at sea, one day at Castaway Cay and one at Nassau. You’ll still get a quality cruise if you travel on the Dream just not as much time.

The first two ships from Disney, the Magic and the Wonder, may not have a water slide or the latest technological wizzygigs as their sister ships, but they’re just as charming and enchanting (if not cheaper!). I’ve heard they manage to make up for these shortcomings with more intimate guests services. These two ships now run through the seasonal routes of Hawaii, New England, Alaska and  Europe, through various times in the year. These tours have less families with small children, as that they’re not popular vacation itineraries, so if you’re a couple with no kids or have older kids that still want that Disney touch, these are worth looking into. 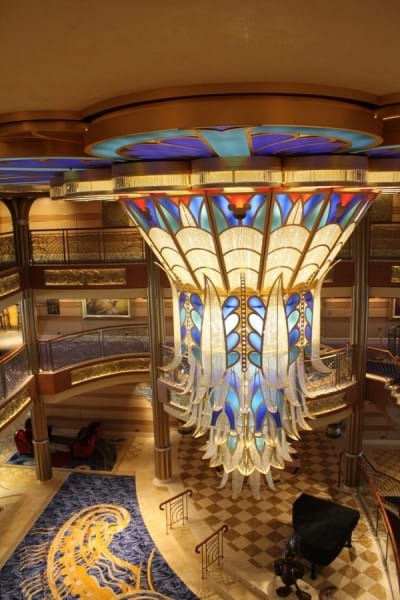 Okay, you’ve decided where and how, now to decide when and how much! If you’re looking for low season fares, then avoid any major US holiday or long weekend – that’s when Disney’s prices flux and flow (usually up, just like the parks). When can you save? Cruises during inclement weather seasons are always cheaper BUT that doesn’t mean they’re going to sail full steam into a hurricane! No. The ships are all equipped with weather radar, warning of storm fronts and the like, allowing them to make alternative plans/routes – which might mean alterations to your itinerary. Let’s say you travel during hurricane season in the Caribbean (June to October) you may find your trip to Disney’s private island, Castaway Cay, cancelled. Castaway has a very narrow inlet for the ships to tender at, which they usually do by backing the ship in – like a tight parking spot at Costco. If the wind is strong they have in the past forgo docking there and spend an extra day at sea. So if the price seems low, then look up the dates on Weathernetwork.ca and decide if you want to gamble!

In a future post, I’ll talk about cabin types and classes, which will greatly affect the price. But for now, know that there are three general types or cabins, from cheapest to most expensive: Inside, Outside and Balcony. The prices vary inside these categories too and if you’re the type of traveller who thinks a stateroom is only for sleeping, then you can find a cheap inside room with some diligent hunting on Disney’s Cruise site.

Puttin’ Down Some Doubloons

Ready to book? Travel agents will have different sets of rules for booking reserving, so if you have a regular agent that you know and trust, then stick with them – they’ll follow Disney’s booking regulations to the letter and might embellish them to their own rules. I’m more inclined to go to the source and have always booked online through Disney’s site. They require a deposit based on the cost of the cruise, payable by either 75 or 90 days prior to your sailing depending on the cabin type, so read carefully. Unfortunately at this time, they don’t have an incremental payment system like they do for their park vacation packages (ie: putting small deposits towards your outstanding balance online, before you go on your vacation). I wish they did because it would make saving/paying for a cruise that much easier.

One final tip: Make sure you keep an eye (patch) peeled on DCL’s Special Offers page. They love Canadians and offer a discount of usually 15-30% off from time to time!

Whew! That’s a lot to take in on my first article – and we haven’t even left the dock! I hope you’re one step closer to booking a cruise!