Indiana Jones Adventure: Temple of the Crystal Skull is an attraction located in the port of Lost River Delta at the back of Tokyo DisneySea. This attraction offers a high-speed dark ride through an ancient temple. Here is how the Tokyo DisneySea Press Kit frames the ride story (via Disneyology):

“The time is the 1930s. The place is Lost River Delta, a tattered outpost of civilization on the ragged edge of the ever-encroaching Central American rainforest and jungle. Famed archaeologist Dr. Henry ‘Indiana’ Jones, Jr., has discovered a long-lost pyramid hidden in the dense vegetation. The ancient limestone edifice is called Temple of the Crystal Skull …” 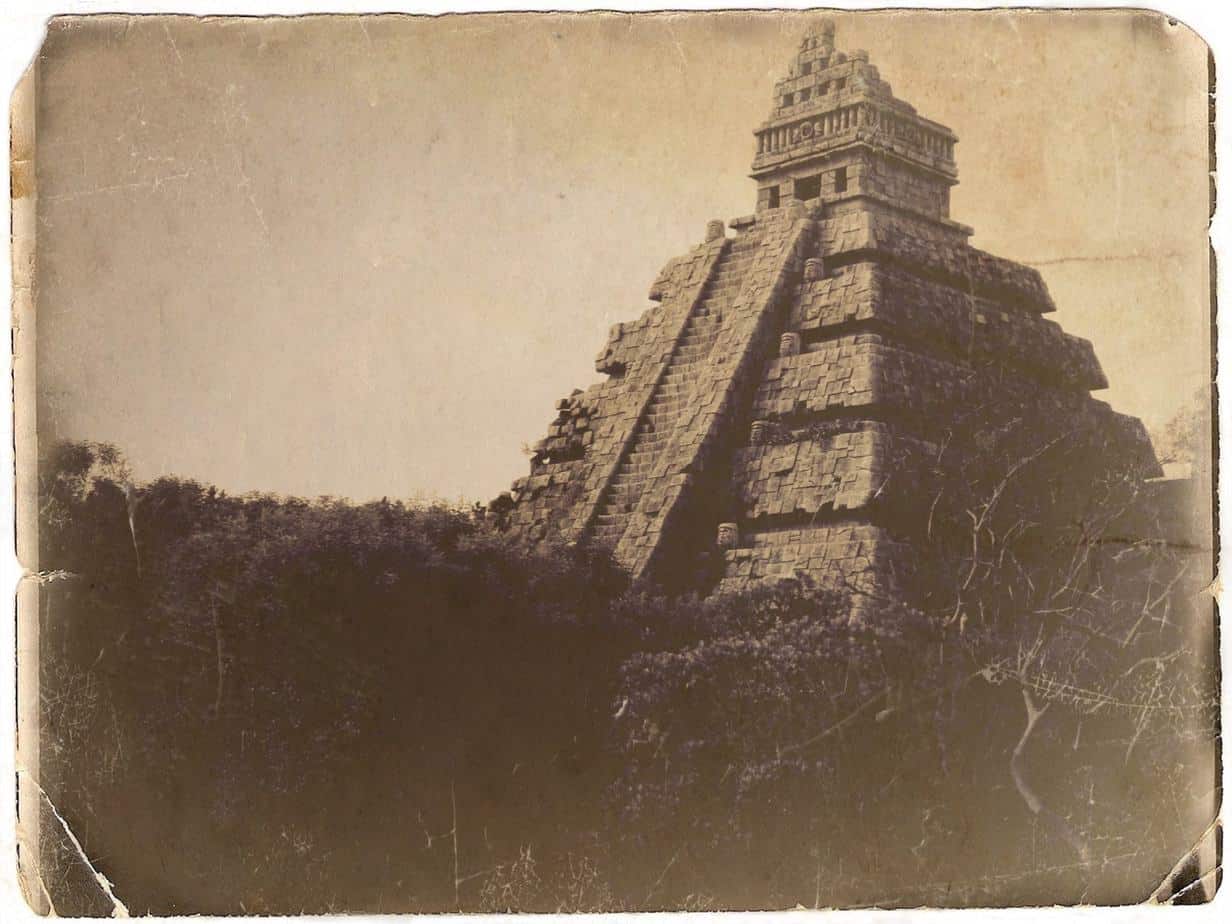 Our tour of the ride is split up into three sections:

Outside Temple of the Crystal Skull 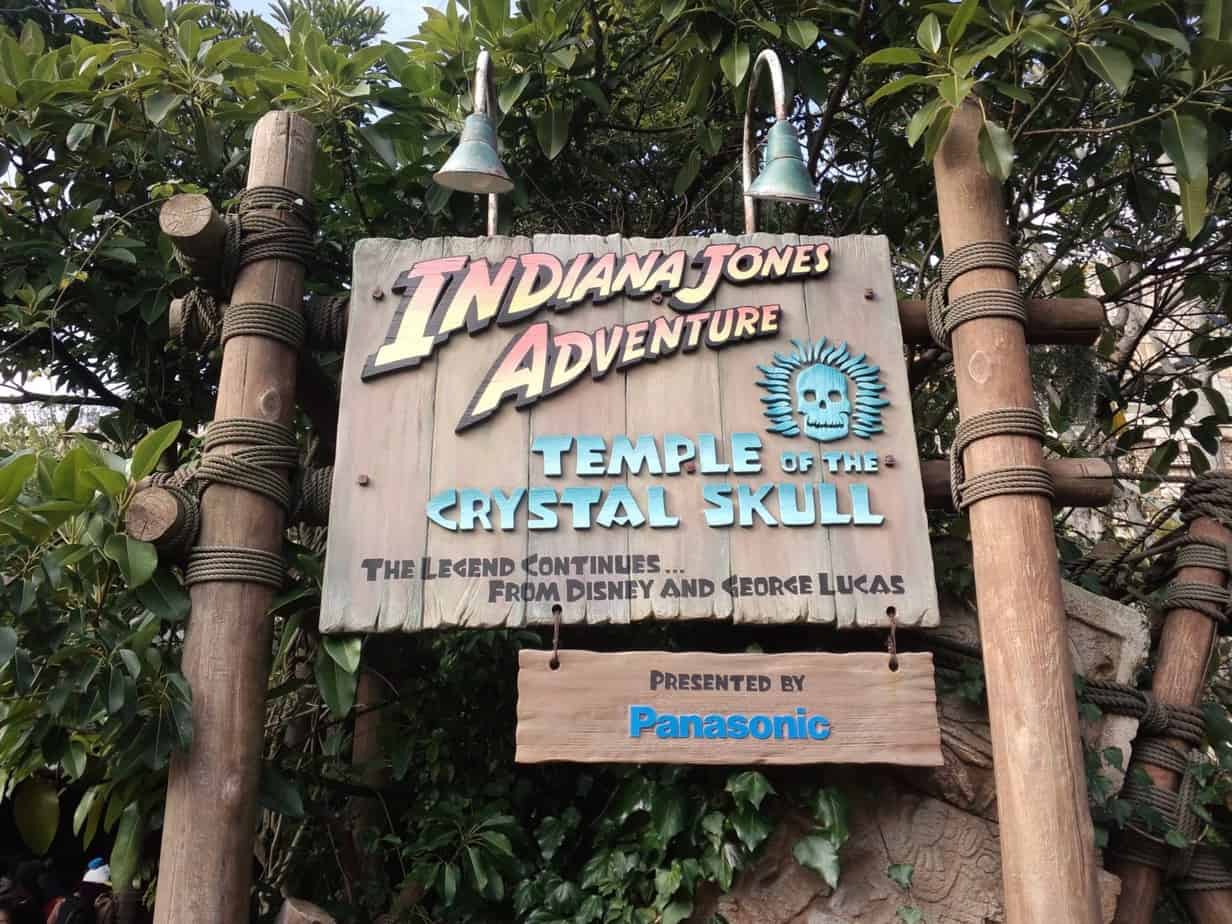 Actually, while the glowing blue crystal skull, that otherworldly MacGuffin, does pop up during the ride, it does not feature the same elongated cranium as the one in the movie, because the Temple of the Crystal Skull attraction actually predates the Kingdom of the Crystal Skull movie by a few years. It is one of DisneySea’s opening-day attractions, meaning it started servicing riders in 2001, seven years before the movie hit theaters and gave rise to the term “nuking the fridge” (a cinematic variant on the expression “jumping the shark”). 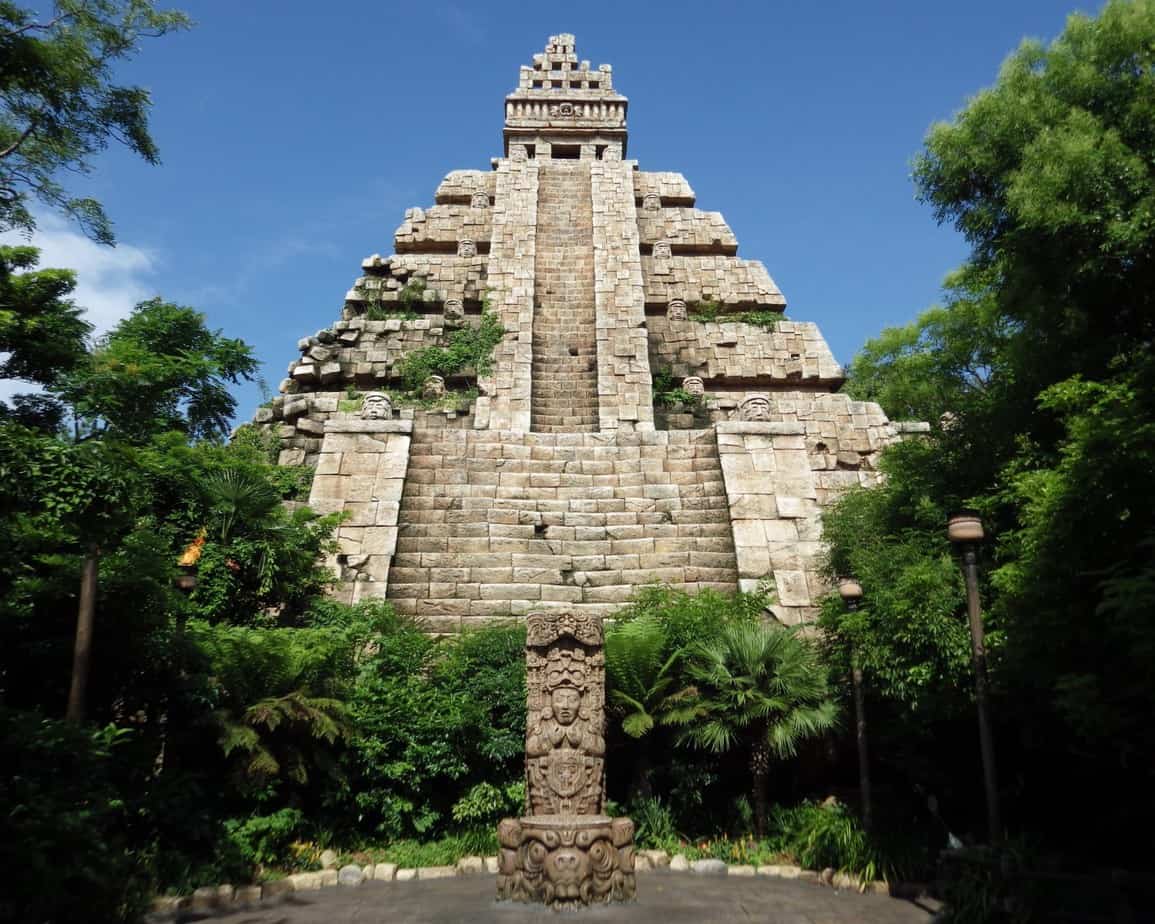 Likewise, though Temple of the Crystal Skull is modeled after Temple of the Forbidden Eye in California’s Disneyland, it sports some key differences, not the least of which are its setting (Central America instead of the Indian subcontinent), its ride building (a majestic step pyramid similar to the one in the Mexico Pavilion at Epcot), and its amazing queue.

That queue starts outside the temple. Before you get in line, keep an eye out for Fedora hats. Indiana Jones himself has been known to wander around in Lost River Delta and do character greetings from time to time. If you are lucky, you might meet him—not the real Harrison Ford, of course, but rather a Disney Cast Member dressed up as the character. 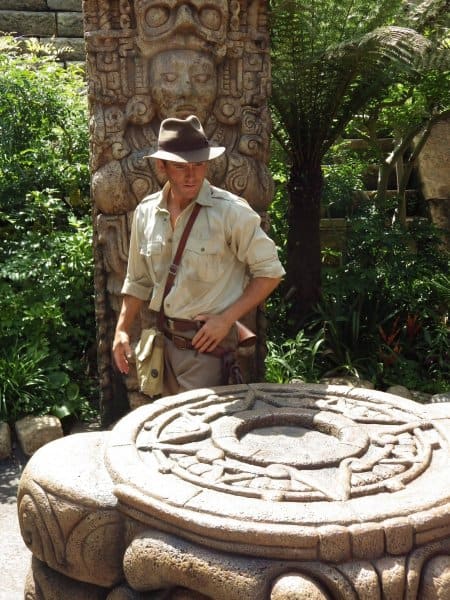 The ride itself is really a mish-mash of things associated with Indiana Jones. It does not involve the temple god Mara as in California, but its backstory does still involve a search for the Fountain of Youth. This is somewhat reminiscent of the grail quest in Indiana Jones and the Last Crusade, whereby characters chased the grail to the ends of the earth in order to drink water from it and inherit eternal life.

In this attraction, the runaway boulder from Raiders of the Lost Ark also makes an appearance, as does the booby trap of swishing darts, shot from the mouths of stone faces. 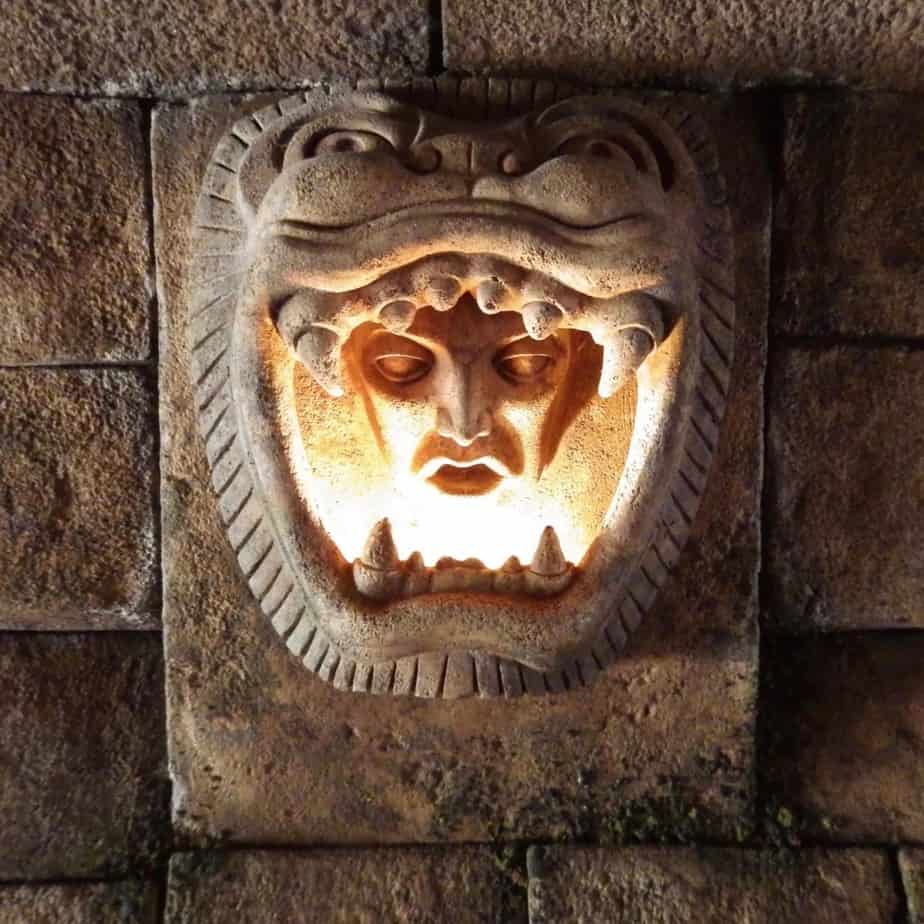 Outside the ride, there are plenty of other stone carvings that will catch your eye as the line twists around into the main pyramid chamber of the temple. 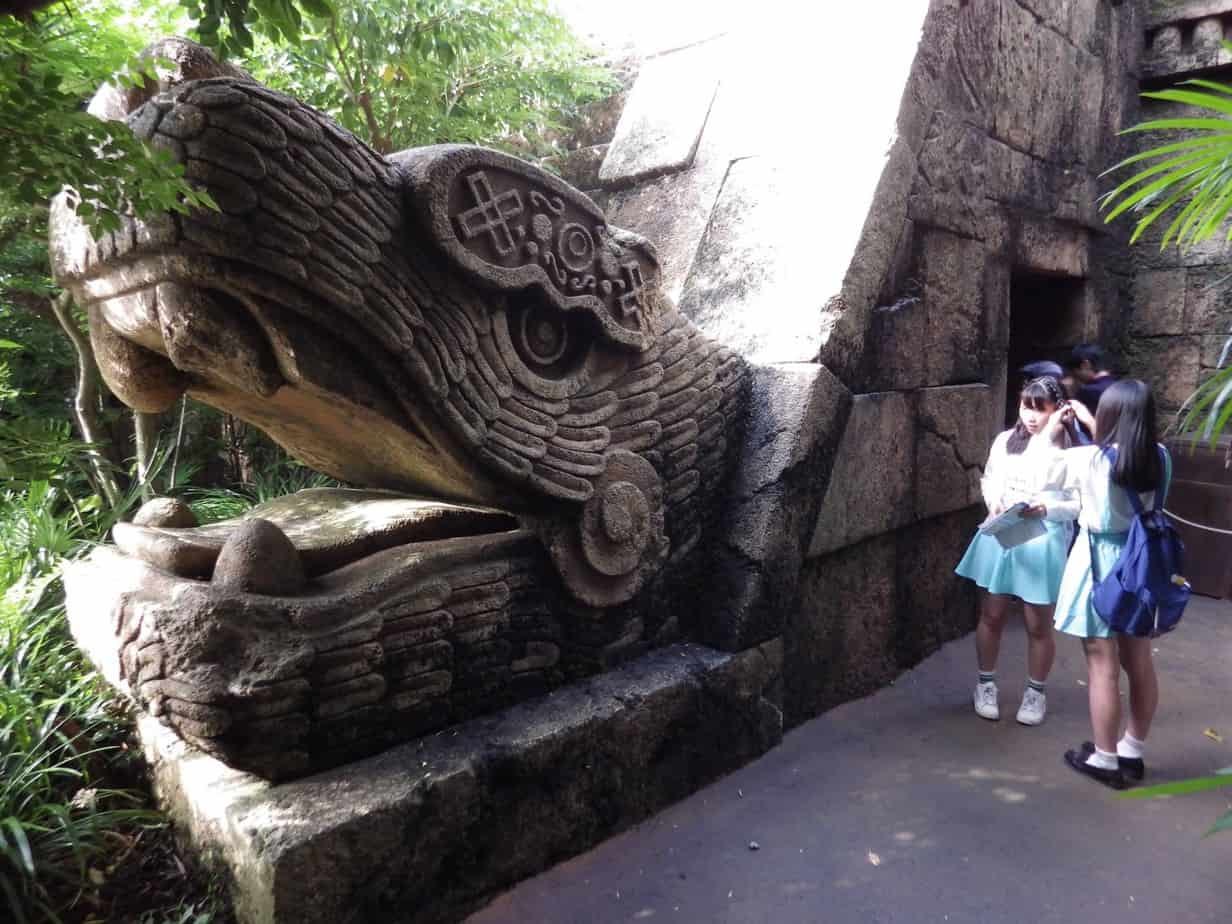 Though this is a Fastpass ride like Lost River Delta’s other major attraction, Raging Spirits, and an exceptionally busy day might see it posting a standby wait of 180 minutes or more, it is also an attraction with the Single Rider option. So if you are alone or you do not mind riding separately from the rest of your group, you might want to save your Fastpasses for other rides at DisneySea. 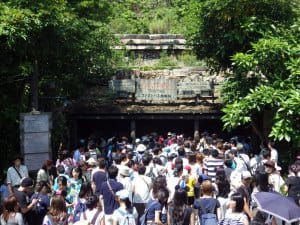 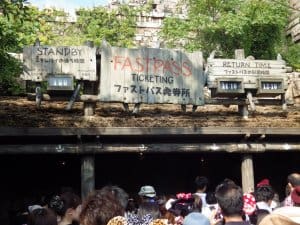 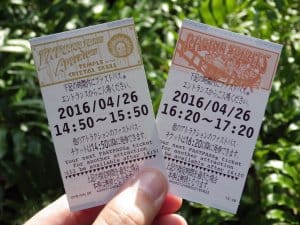 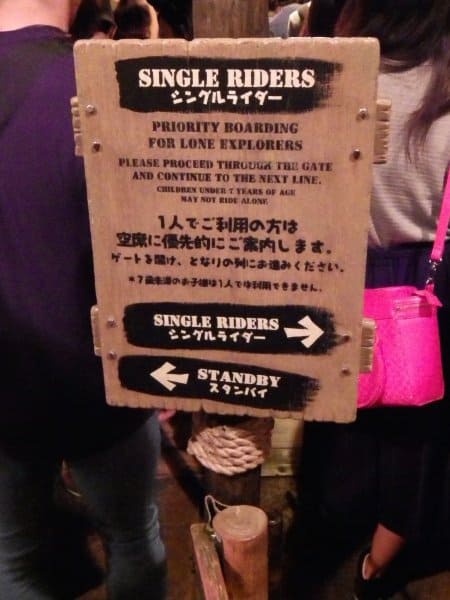 Inside Temple of the Crystal Skull (The Queue Experience)

Once you enter the central pyramid chamber, the sheer expansiveness of it makes for a jaw-dropping sight. According to the backstory, this cavernous chamber is the site of “an active archeological dig.” Look up, and you will see a huge, skull-studded idol with a garland of twin snakes stretching up toward the pyramid top. 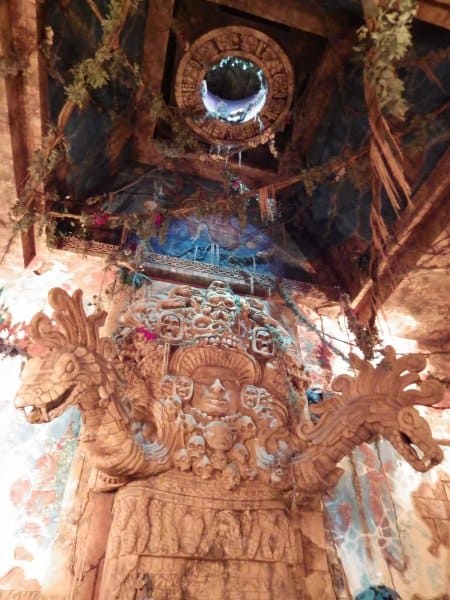 Look down, and you will see a pit of skeletons—victims of the temple’s booby traps—lying below the rail. As you traverse the site’s “hastily erected scaffolding,” pay attention to the background details. Vines hang from the ceiling, and an array of colorful frescoes adorn the walls. It is all part of the elaborate decor. 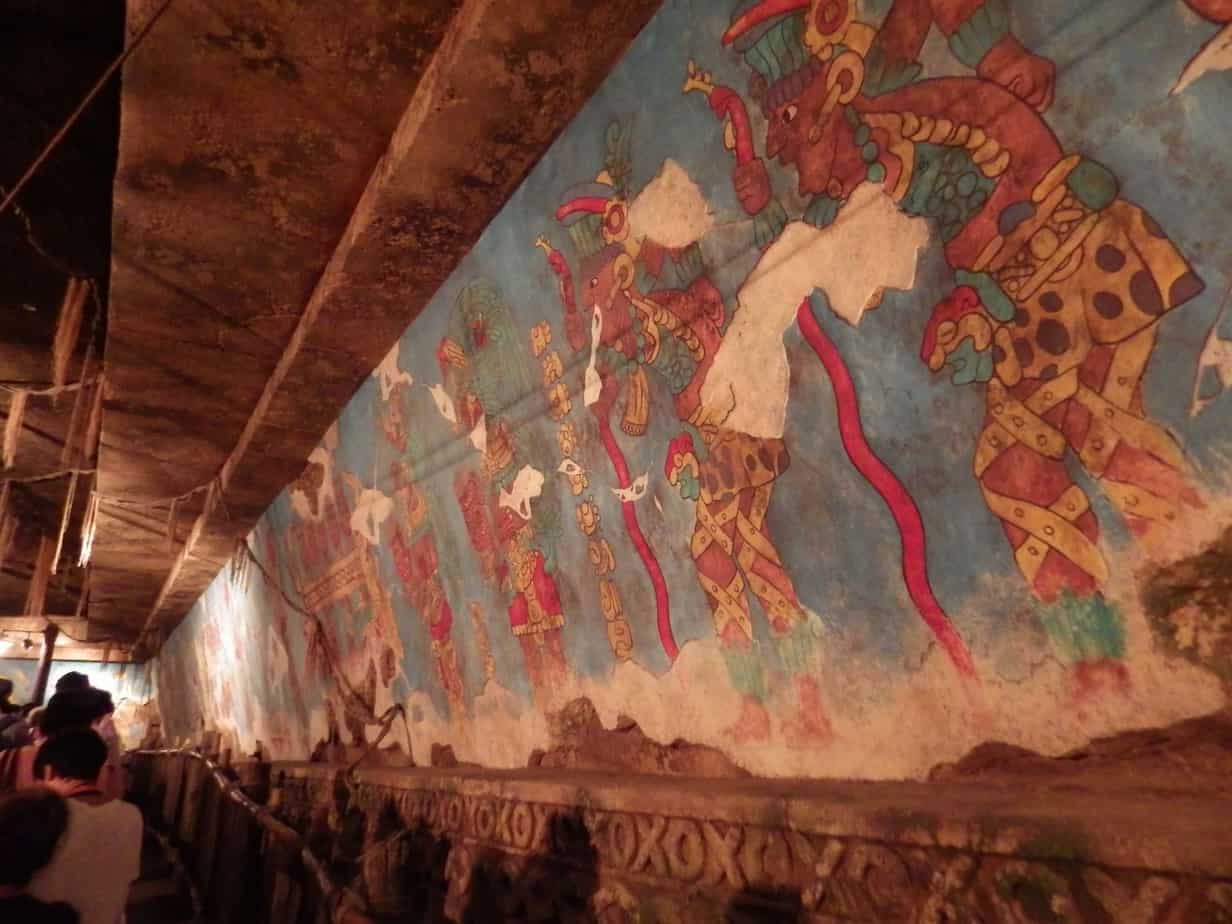 At Disney’s Hollywood Studios in Florida, every showing of the Indiana Jones Epic Stunt Spectacular! allows a few lucky guests to volunteer as extras on the streets of Cairo. If you have ever fantasized about what it would be like to participate in the Peruvian temple scene at the beginning of that show, then suffice it to say, Temple of the Crystal Skull at Tokyo DisneySea is probably the next best thing. 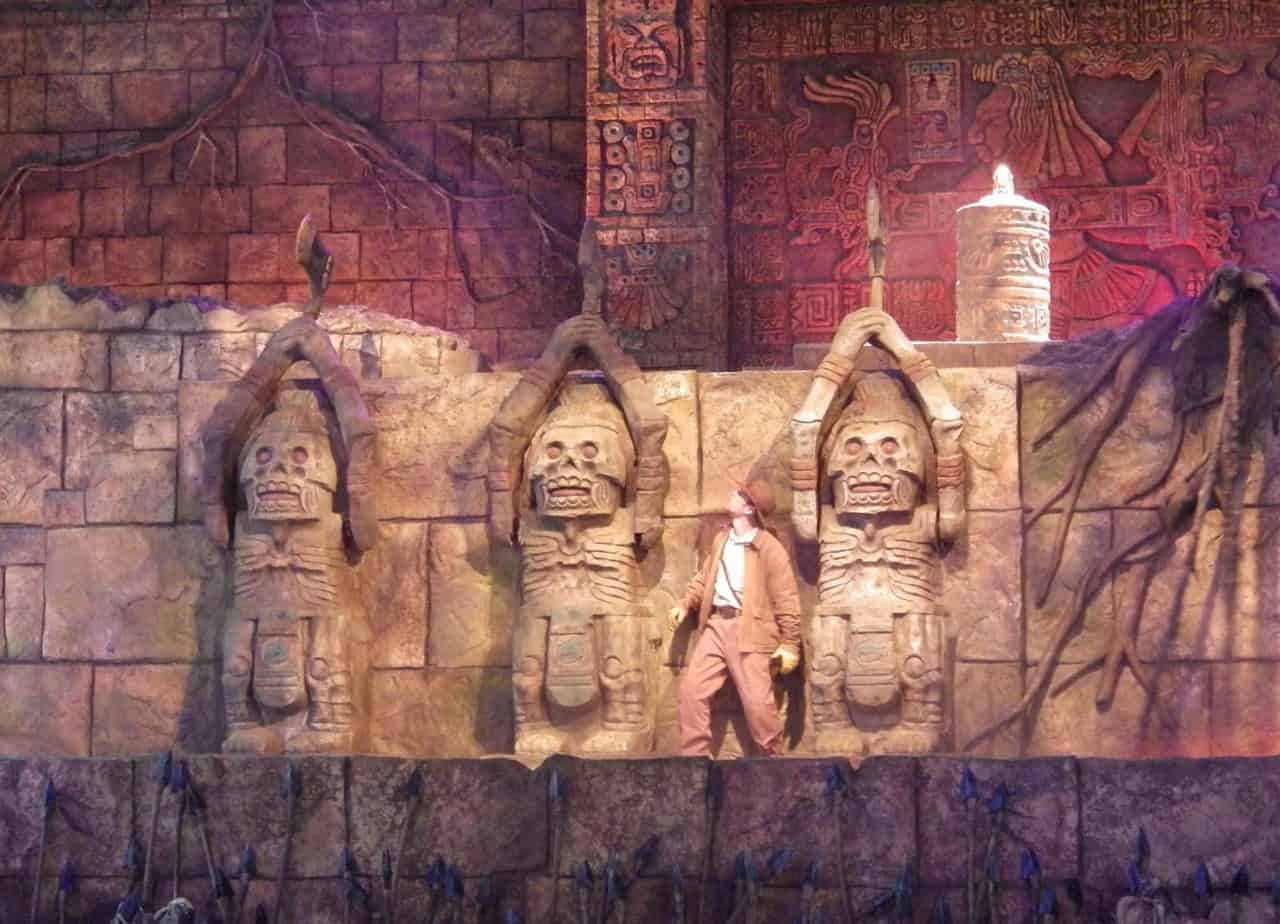 It is like stepping onto the set of a movie, and what’s more, it’s like you’re the star of that movie: an adventurer, given carte blanche to wander through the corridors of a lost temple as if it were your own personal playground.

The pyramid chamber alone raises the whole simulated environment to a next-level experience. It is truly awe-inspiring. As the wooden walkway winds up through it, giving you an elevated view of the idol, you will soon find yourself ducking through a broken wall into a smaller chamber where there is what looks like a big glowing medallion. 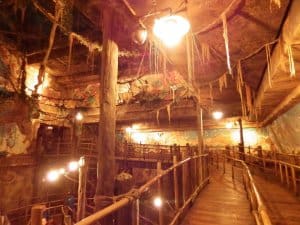 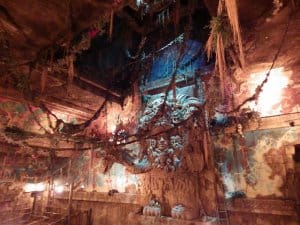 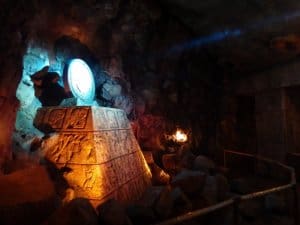 This room evokes the scene in Raiders of the Lost Ark where Indiana Jones enters the Map Room at Tanis and uses the Headpiece to the Staff of Ra to reveal the location of the Well of Souls. Fans may remember seeing the Well of Souls scene in the now-defunct Great Movie Ride at Disney’s Hollywood Studios, as well. 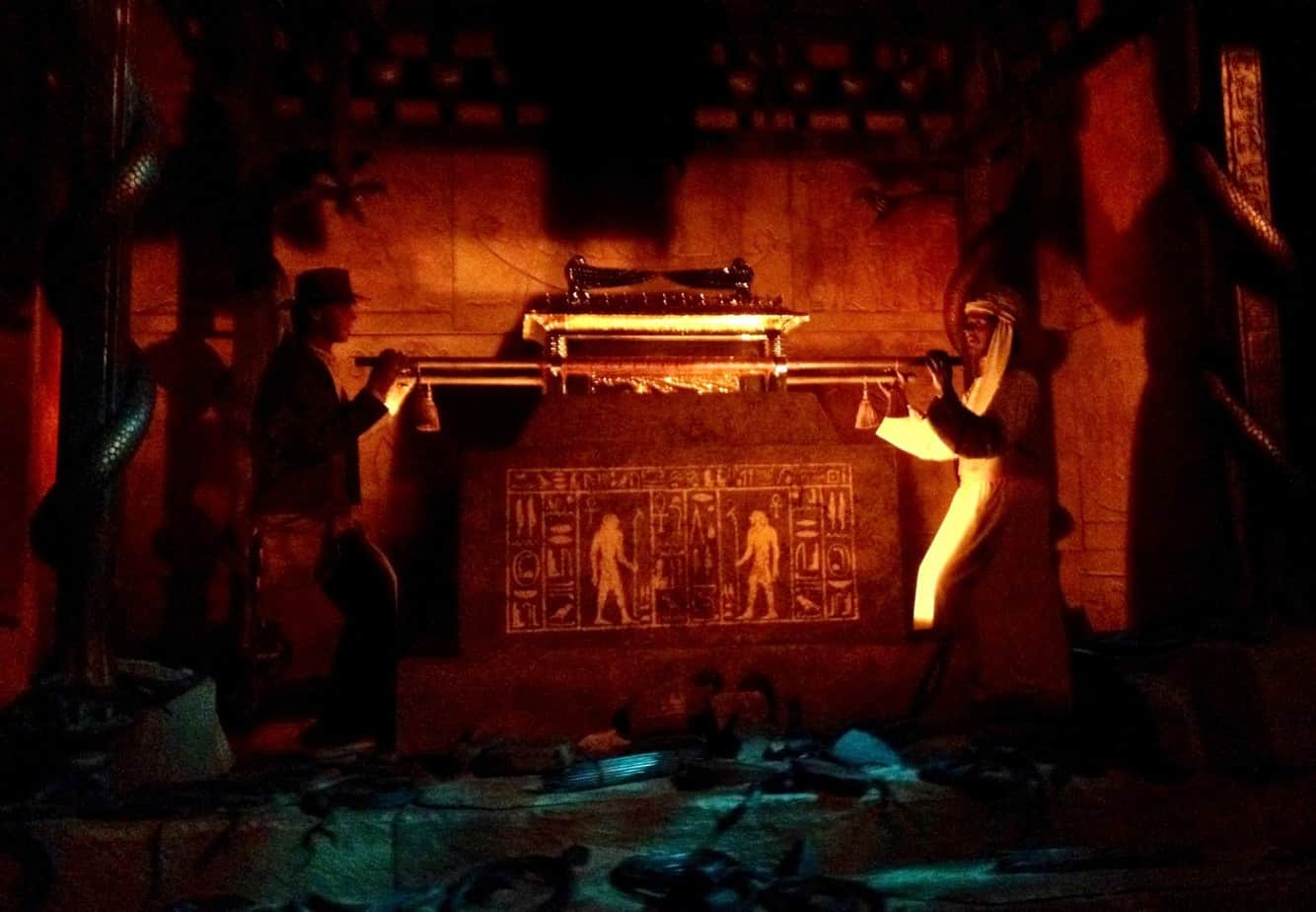 Raiders of the Lost Ark scene from The Great Movie Ride.

But again, Temple of the Crystal Skull is meant to be a Central American pyramid, in keeping with the Central/South American jungle motif of the Lost River Delta port. So instead of a safety message from Sallah (Indy’s Egyptian confederate in that movie), what you will see in the next room, after the line makes a bend past some desks littered with artifacts and chalkboard drawings, is a safety message from a new sidekick named Paco. 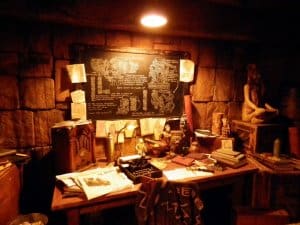 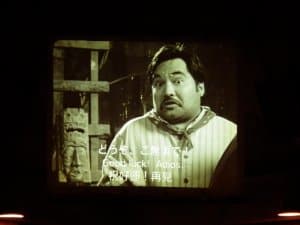 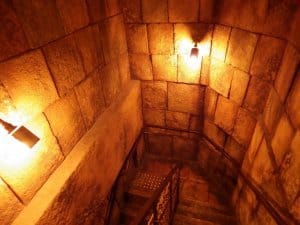 Paco exists outside the Indiana Jones movie canon. While the character could be seen as slightly stereotypical (in the ridiculous, light-hearted manner of Chip ‘n’ Dale singing, “My Tacos Is Wonderful,” while wearing ponchos, sombreros, and Mexican mustaches), Paco is actually an instrumental figure in the backstory for this ride, insofar as it is his unauthorized “Temple Tours” that riders are joining.

This is shown on the English story card for the attraction. These double-sided story cards are usually available from Cast Members on request. They are one-of-a-kind, and they make for a nice free souvenir from your trip to Tokyo Disney Resort. 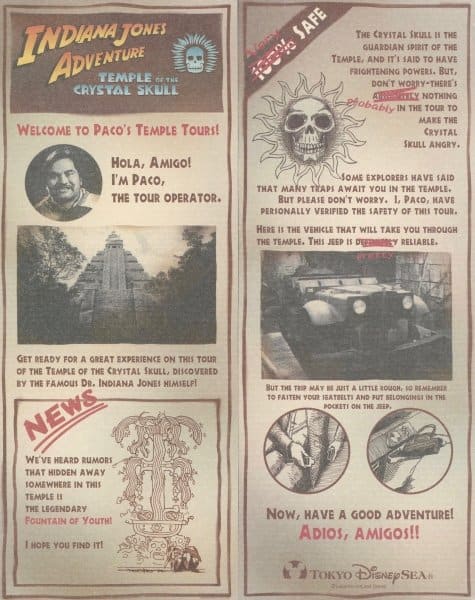 The whirring of an old black-and-white film projector accompanies Paco’s safety message, which plays on a constant loop. Unlike Temple of the Forbidden Eye in California, there is no “Eye on the Globe” newsreel here. After Paco bids riders “Adios,” the line takes you downstairs to board your all-terrain jeep for a turbulent, three-and-a-half-minute thrill ride through the temple.

On Board Indiana Jones Adventure (The Ride Experience)

People try to shoot guerilla-style videos of the ride and post them on YouTube, but the ride is so dark and fast and jerky, that most of the time, the videos cannot do it justice. If anything, you are probably more likely to drop your camera out of the vehicle and bring the whole ride screeching to a stop than you are to come away with any good videos. Better to just sit back and take it all in with the human eye: the best camera the world ever invented.

If you really want to see one, Attractions Magazine posted a decent low-light POV video earlier this year:

In this video, you can see some of the attraction’s other set pieces, like a massive stone face that emits beams from its eye, a wall full of creepy-crawly beetles illuminated by jeep headlights, and a giant animatronic snake-god (not a hooded cobra, like its cousin in California. This one looks more like a buck-toothed parade mascot. But perhaps the occasional goofy special effect is entirely in keeping with the B-movie spirit of the Indiana Jones mythos.)

All in all, Temple of the Crystal Skull is a really sweet feat of Imagineering, certainly one of the best attractions at Tokyo DisneySea. Even if there are no official movie props here and the ride itself is similar to the one at the original Disneyland in California, this version is worth experiencing if only for seeing the amount of gorgeous detail that went into the structure housing it. 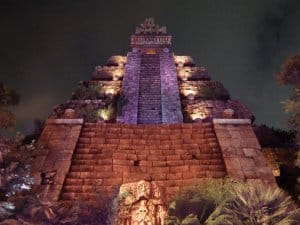 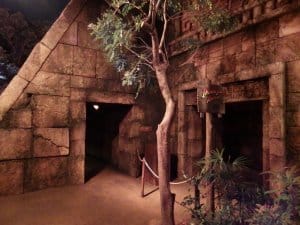 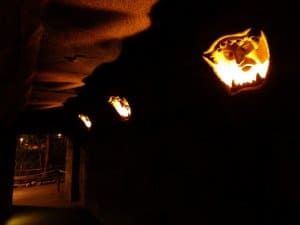 Alongside Mount Prometheus, the Tower of Terror, the S.S. Columbia ship, and the SeaRider building in Port Discovery, that righteous Aztec pyramid—the Temple of the Crystal Skull—remains one of DisneySea’s biggest, most impressive physical landmarks. As you disembark the DisneySea Transit Steamer Line, and you see the sight of the temple looming over Lost River Delta from the bridge, you could be forgiven for feeling like you really were some intrepid 1930s explorer making an archeological discovery in the jungle. 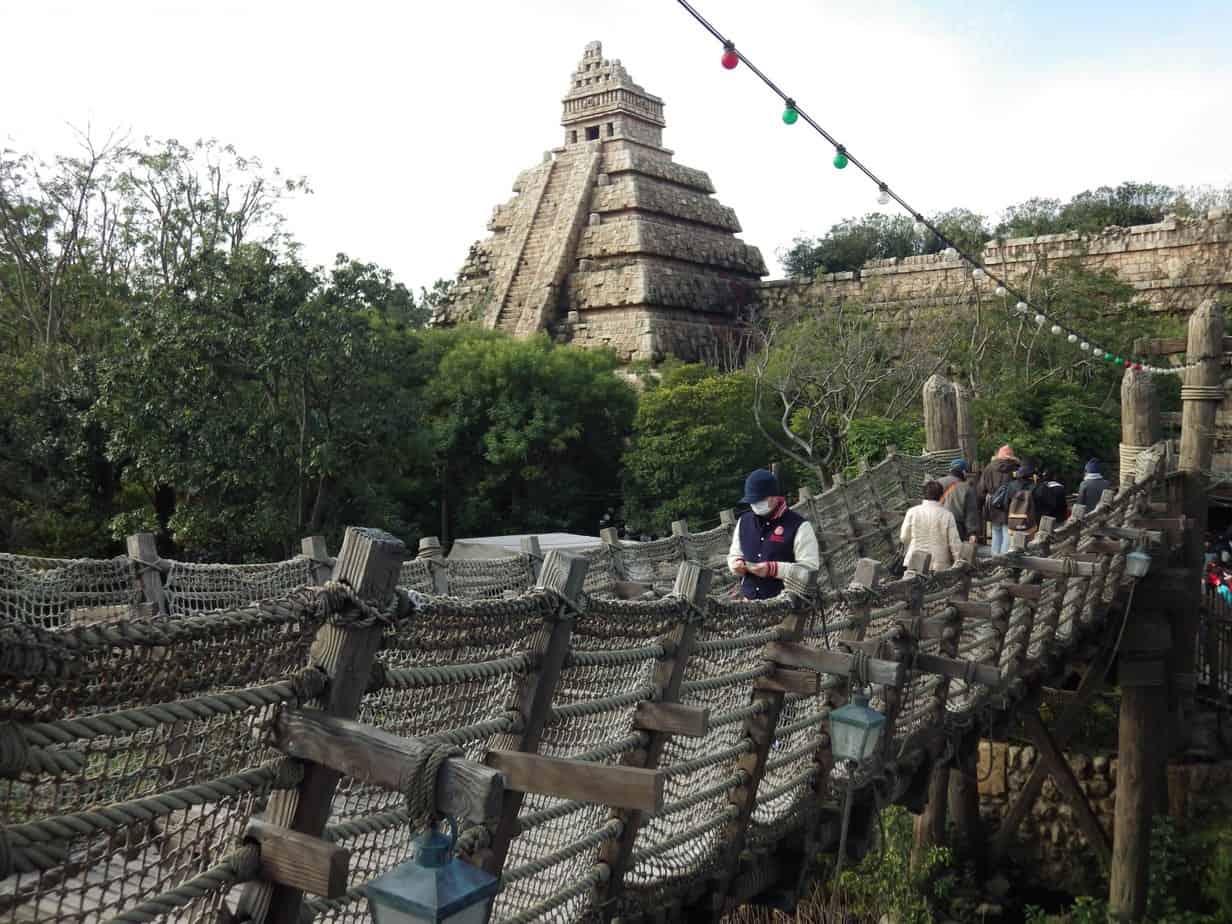 To see more pictures of Indiana Jones Adventure – Temple of the Crystal Skull, check out this photo gallery. Your photographer for this expedition, who also doubled as your tour guide, was The Gaijin Ghost (not Paco). Follow him on Twitter as he mounts further expeditions into the world of cinema and other parts of Tokyo. And stay connected with TDR Explorer via all the usual channels: YouTube, Instagram, Facebook, and Twitter. 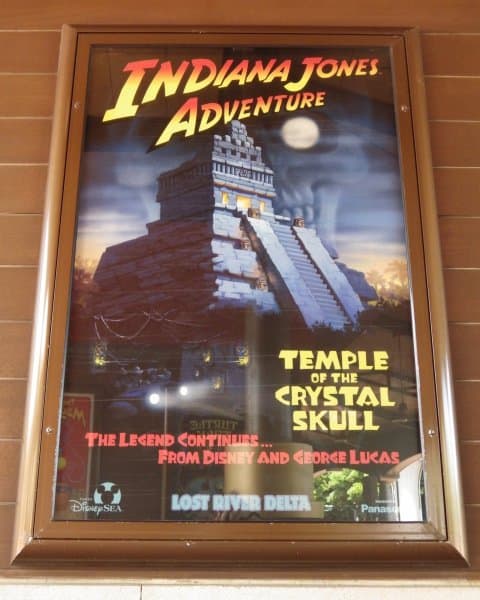