A brand new music video with music by Galantis ft. Charli XCX, WE ARE BORN TO PLAY, showcases parts of the new area at Universal Studios Japan. Including shots of the Mario Kart attraction where it appears there are 4 people to a kart. Also, people wearing wristbands called a “Power Up Band,” that interacts within Super Nintendo World.

When you visit Super Nintendo World you’re able to buy what’s called a “Power Up Band” that’ll connect to a smartphone app. Within the app, you’re able to collect coins and compete with other players. It’ll track your score and connect with a multi-level game area. Details are slim on this but you’ll also find the iconic “?” Blocks and other elements from Nintendo games.

These wearable bands come in different styles themed to familiar favourites such as Mario, Luigi, Peach, Toad, and more. This sounds like a ton of fun and adds another element of interactivity to a theme park area! I’m intrigued to see what we’ll be able to do.

Super Nintendo World will use tech + smartphone app⚡ Wearable wrist bands called the “Power Up Band” will make you feel like you’re part of the game world 🎮 You can collect digital coins and compete with others #SuperNintendoWorld #MarioKart pic.twitter.com/ltloaNqCCE 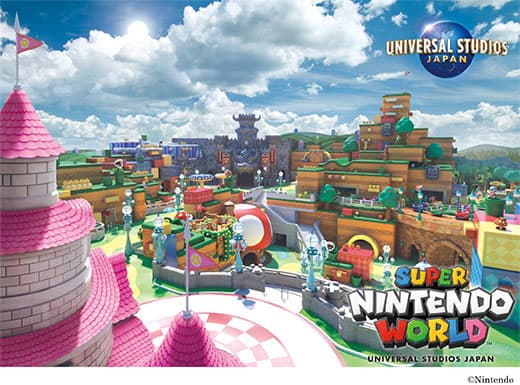 Peach’s Castle and Bowser’s Castle are two icons that’ll appear in the area alongside two attractions. Yoshi and Mario Kart attractions will open with Super Nintendo World using the world’s latest technology. There are also restaurants and shops for guests to enjoy.

There’s not much more information shared about what these attractions are specifically. Either way, this is incredibly exciting and this beloved franchise will without a doubt draw even more crowds to Universal Studios Japan in Osaka.

Universal Studios Japan was the 5th most attended theme park in the world in 2018, which makes it the most visited Universal Park in the world. I expect the crowds for the opening of this new area to reach park capacity, especially since it looks like it’ll open in the summer.

We all dreamed of racing in a “real” Mario Kart when we first played the game back in 1992 on the Super Nintendo. Our dreams are finally coming true with what’s described as “ultra-immersive” Mario Kart attraction. While the details are still thin at this point, the new music video above shows 4 people in a single kart, so we got that going for us at least.

Here’s a video on what’s known so far about the Mario Kart attraction.

Here’s also a look at what’s known about the new Yoshi attraction at Universal Studios Japan.

Still not convinced? Here are my reasons why you should visit Universal Studios Japan.

I’m a massive Nintendo Fan and I’m quite looking forward to the opening of Super Nintendo World. I have no idea what to expect (except large crowds) but that makes it all the more exciting when we finally get to step foot into a world that so many of us grew up with.

My fondest memories are having my father wake me up asking me to play Super Mario Bros. with him on my NES when I was 5-years-old. This touches on nostalgia heavily and I’m OK with that. With such a global brand, it’s about time something like this was done. I’m optimistic that it’ll be excellent.

Are you excited? Let me know in the comments!