Tokyo Disney Celebration Hotel is the newest value Disney Hotel at Tokyo Disney Resort, which opened in two phases: June 1, 2016, & September 10, 2016. The hotel is split into two separate themed buildings, Wish & Discover, and is a re-branding of an existing hotel complex. 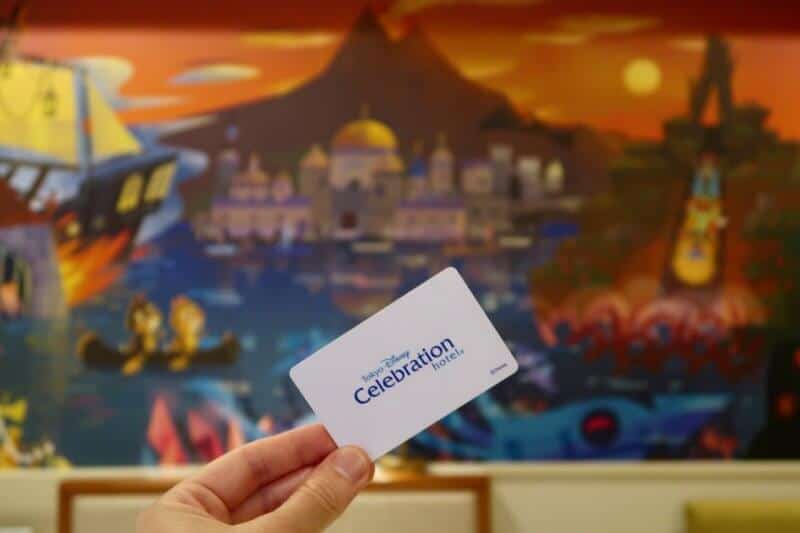 The hotel has two themes across two buildings (which are across the street from each other) called “Wish” and “Discover.” “Wish” is the embodiment of hopes and dreams of fantasy, while “Discover” is the spirit of excitement and adventure. 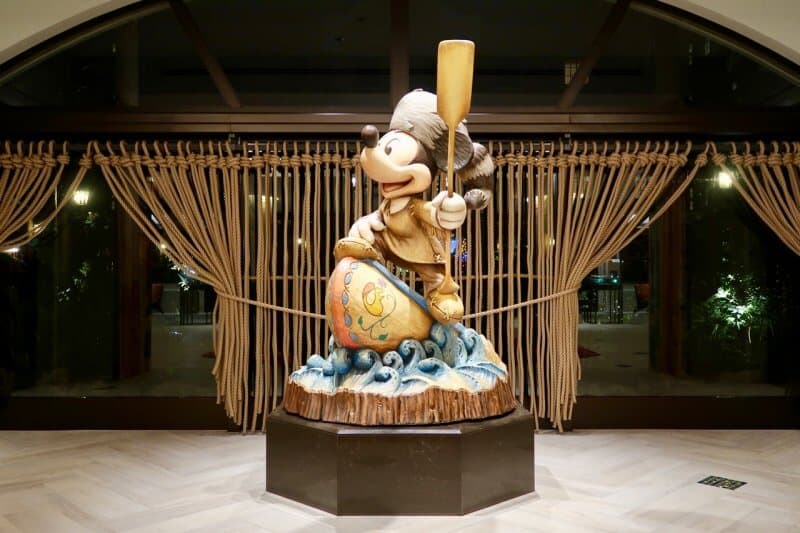 “Wish” showcases themes from the Arabian Coast, Cinderella Castle, it’s a small world, among other attractions from the parks. “Discover” showcases “adventure,” such as 20,000 Leagues Under the Sea, Journey to the Center of the Earth, and Mount Prometheus. 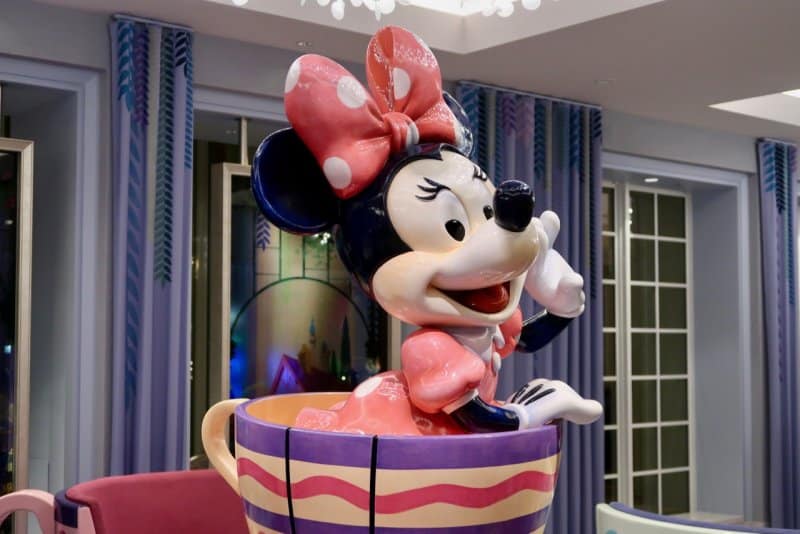 The different hotel buildings, while different in their theme, the underlying architecture of the lobby, courtyard, and rooms are mirror images of each other. 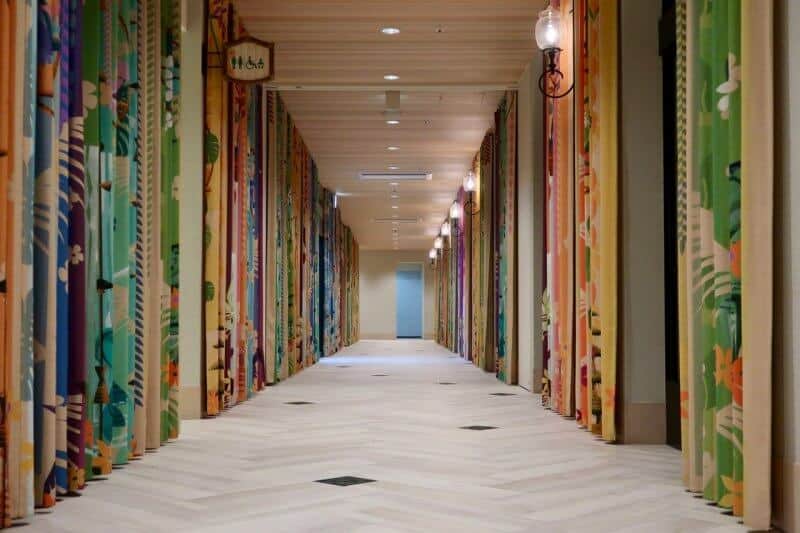 I stayed on the Discover side in the Garden View room for a night at the cost of ¥32,000 (~$285USD). The cost of the standard room was the same price, so it was a no-brainer to choose the room with a view of the courtyard.

The price of the Disney Hotels fluctuate depending on the demand. As an example, if you look in January (after the New Years event which is the first week), you’ll see prices as low as ¥15,000 ($140USD) per night — which is the low season. Then as high as ¥51,000 ($465USD) per night on the last week of December (the lead up to New Years is busy). Our guide tells you the best times to visit (including the slow times), also check out the Tokyo Disneyland Crowd Calendar.

A deposit of ¥15,000 (~$132USD) is charged to your credit card after you make your reservation.  ¥30,000 is the required deposit on the deluxe hotels at the resort. The rest of the payment is made when you check-in.

As a side note, as of November 1, 2016, the online reservation site only accepts MasterCard as a form of payment. Read more about it here. Inside the parks, they accept all major credit cards. 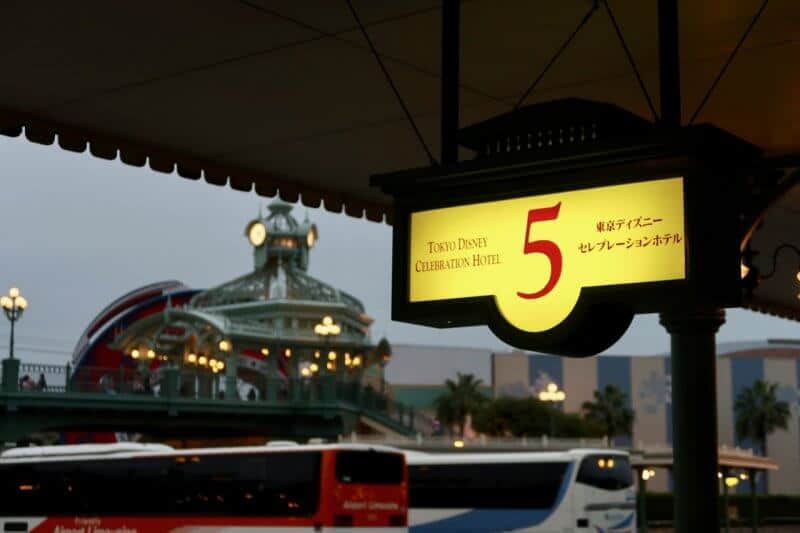 The hotel is not within walking distance from the parks.  It’s in Shin-Urayasu, and it’s a 15-minute bus ride to either park. The easiest way to get there once you arrive at Maihama Station is to take the free shuttle in front of Tokyo Disneyland — walk down the pathway towards the park gates and you see the buses on the left. There is a schedule with the bus times. A bus to the hotel is also at the bus stop outside of Tokyo DisneySea.

The official website has an excellent explanation how to get to the hotel from the airport.

My room faced the Garden (or courtyard), which is nothing special in terms of view, but it’s better than nothing. Various music from the park and attractions fills the courtyard, which is a perfect way to fall asleep. I recommend falling asleep with the window open before midnight. The music turns into a pumpkin — aka turns off — at midnight. 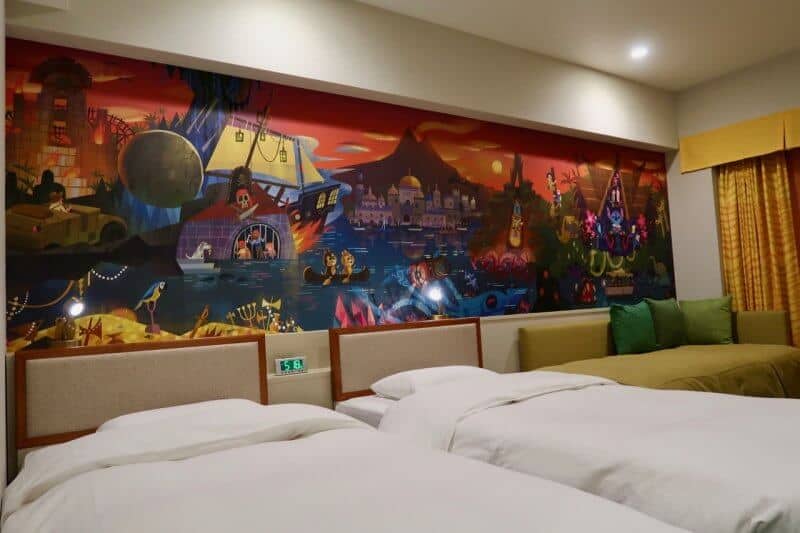 The room is 29 square metres (312 square feet), which is not huge, and depending on how much luggage you have, may feel a bit cramped. There’s no closet but a simple push-out wall to hang items on. The bathroom and toilet room are small, as is common in hotels throughout Japan (don’t worry: the toilet is western). Nothing fancy or awe-inspiring here, which is a bit of a disappointment. It’s jarring compared to the main part of the room. I wish these were given a facelift instead of remaining the same from the previous hotel. 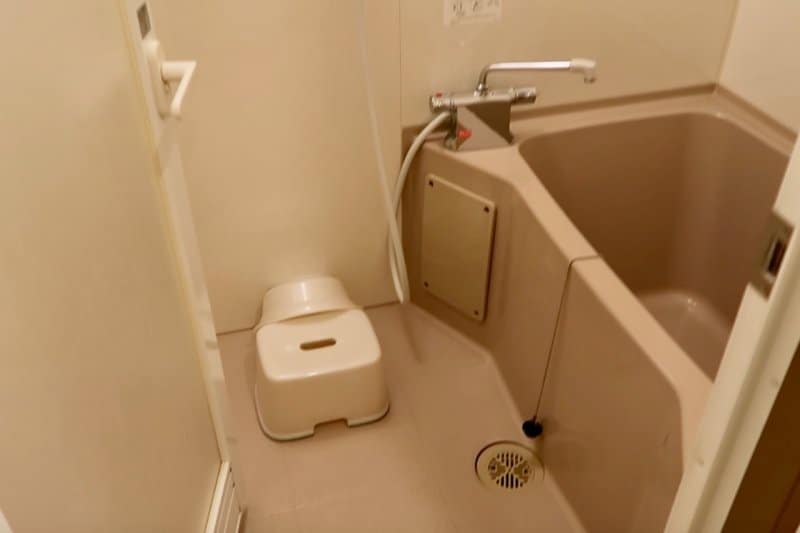 Two single and two-day beds accommodate up to 4 people. The beds are not as nice compared to the Tokyo Disneyland Hotel or the other Disney Hotels, but they certainly are comfortable compared to other typical Japanese hotels (which have rock hard beds on average). I don’t care for soft beds or rock hard, so this is a nice compromise. While it’s a bit more firm, that is my preference, so I think it’s perfect. 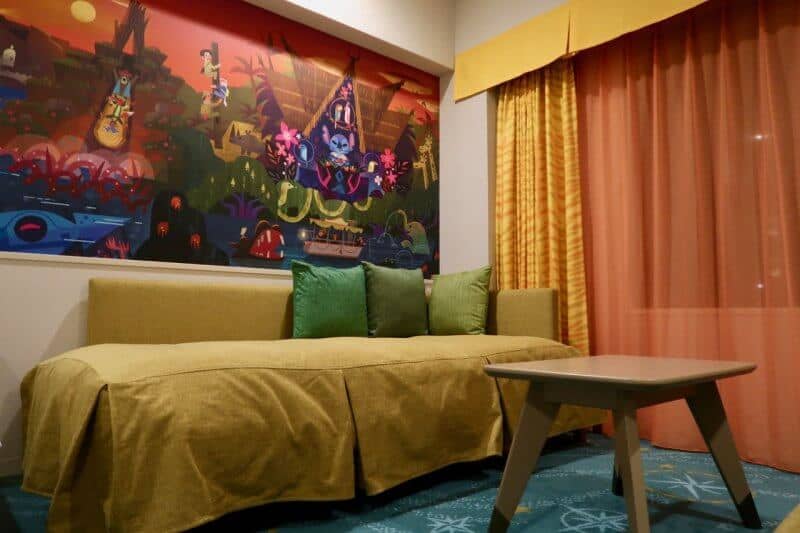 My favourite part of the entire room is the mural and wallpaper. The mural depicts adventure with illustrations from Indiana Jones to Mount Prometheus to Splash Mountain. Of course, my two favourite troublemakers make an appearance and have the usual mischievous look on their faces. 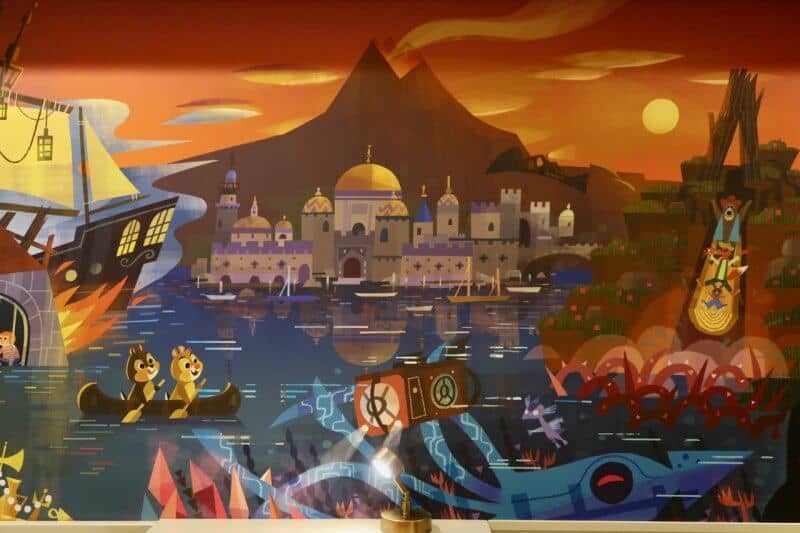 The wallpaper on the opposite side of the room is a pattern of ride vehicles from various attractions from both parks. Also, features Journey to the Center of the Earth, 20,000 Leagues, Indiana Jones, and the Jungle Cruise.

There’s also a dresser, TV (this is where you can get the password for the free wifi for the hotel), and kettle for hot water. There’s an option for English on the TV by pressing the red (赤) button. 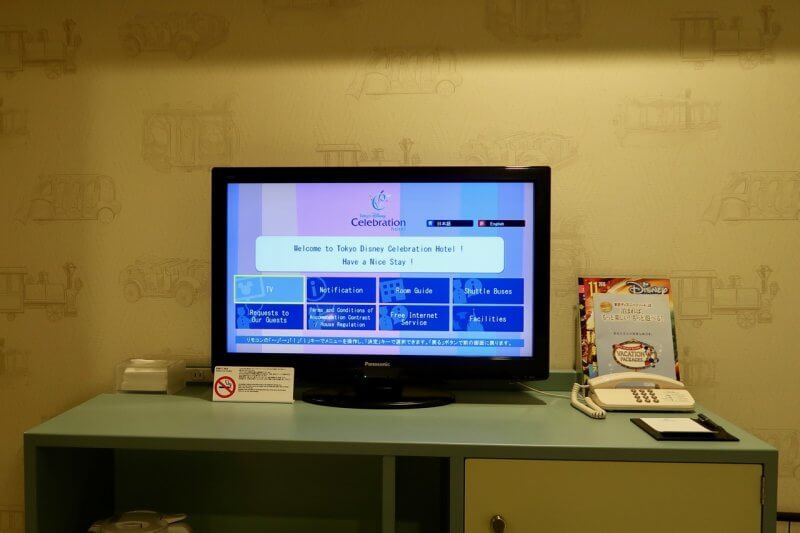 The wallpaper and mural are the best aspects of the room. The rest of the room is missing the “Magic.” But for just a place to stay, it is clean and comfortable. 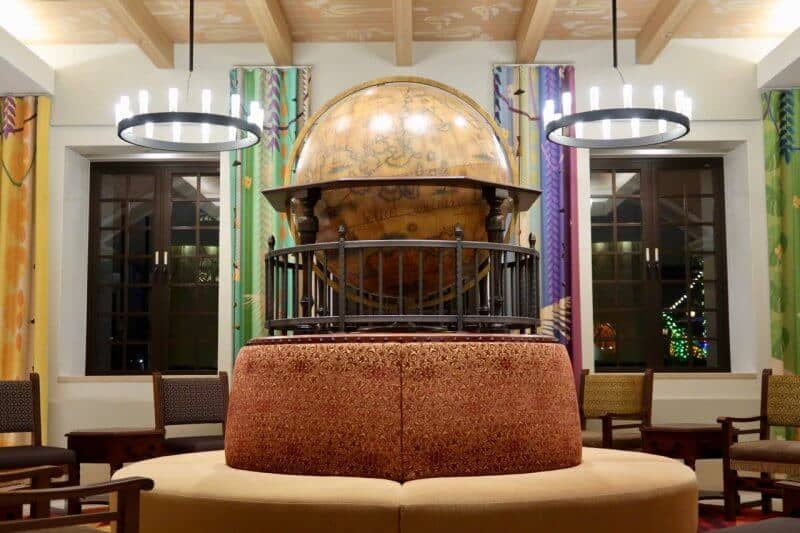 The best part — outside of the wallpaper and mural in the room — is the lobby in both buildings. “Discover” has a unique seating area in the lobby themed after “Beaver Brothers Explorer Canoes” and the globe from Magellan’s at Tokyo DisneySea. A simple (but appropriate) statue of Mickey made of “wood” is the centrepiece of the lobby. On both sides of the lobby are glass panels with beautiful illustrations of various attractions. By the entrance are fantastic miniature models of attraction ride vehicles — Journey to the Center of the Earth is one of them. 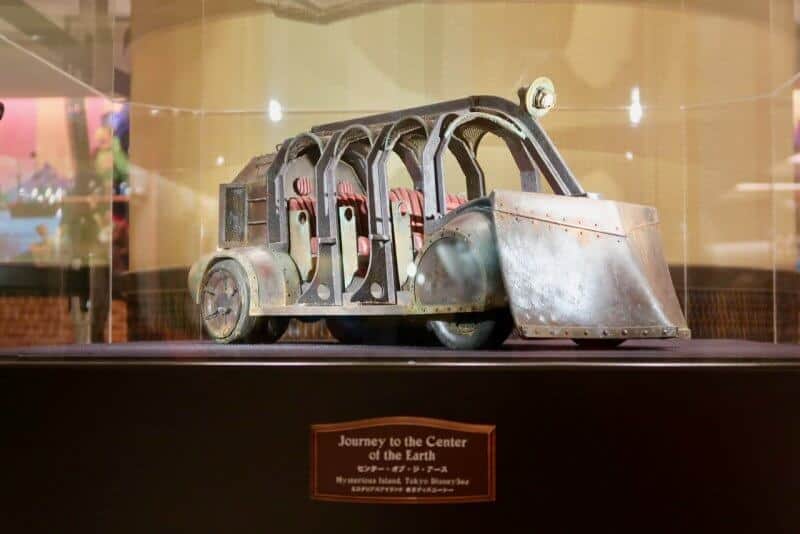 Over on the “Wish” side of the hotel, the lobby is not as well-themed, in my opinion. The main area has teacups with Minnie as the centrepiece. It also features an Aladdin-inspired seating area on the left and Castle Carousel-themed seating area to the right. The same as the “Discover” side, there are glass panels with beautiful illustrations of attractions and miniature models of various attraction ride vehicles — shout out to Pooh’s Hunny Hunt! 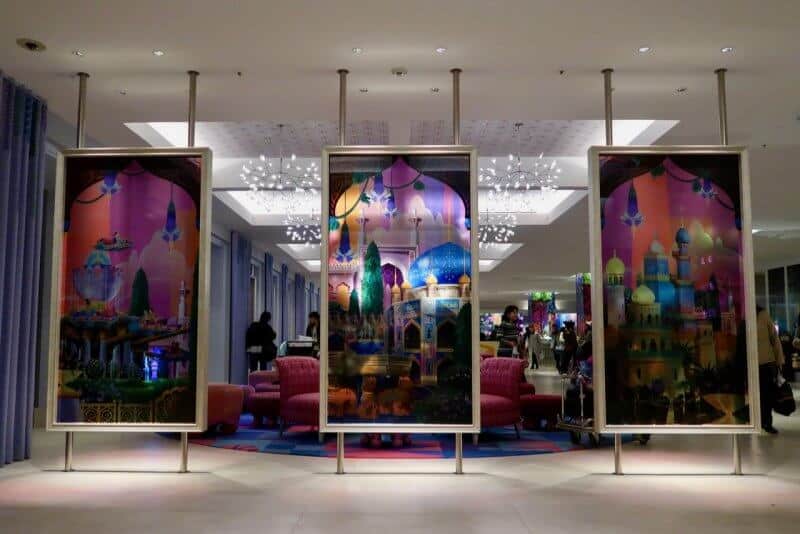 The 24-Hour Convenience Store is similar to the ones you find throughout Japan. Meaning, it has everything you need, including hot meals, batteries, fresh coffee, desserts, and almost everything else you can think of. There’s even an ATM which accepts overseas cards for cash withdrawals. If you forgot anything at home, there’s a good chance they have it there. 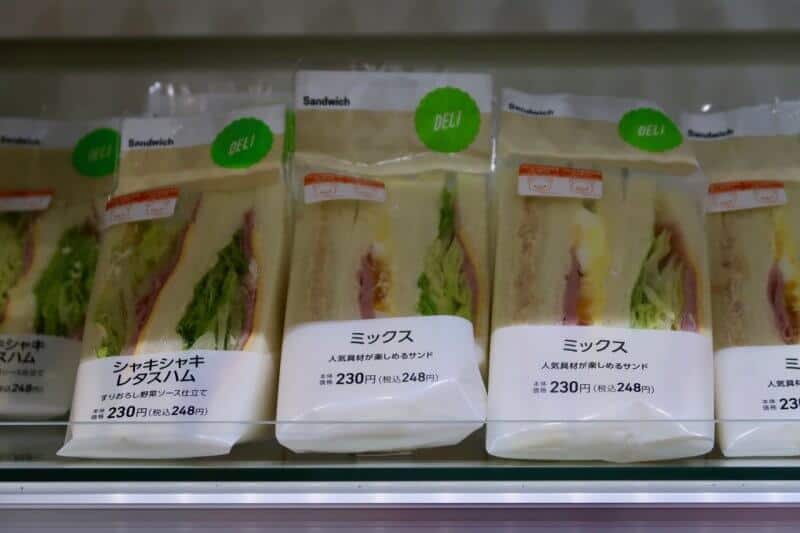 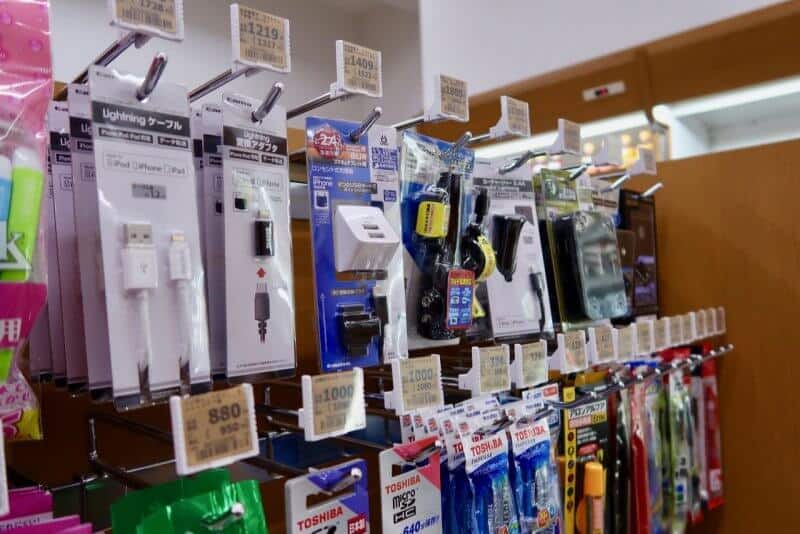 The Disney Fantasy Gift Shop has select items from both parks. If you are in search of something specific, you’re best going to the parks or Bon Voyage for a full selection. But it’s good if you need something quick for a gift.

The lounge area is nothing more than a cafeteria with wallpaper and a microwave. You’re better off lounging in the lobby — at least there is some effort in theming there. There is, however, gachapon machines with Disney items and small UFO catcher machines, which I am a sucker for. 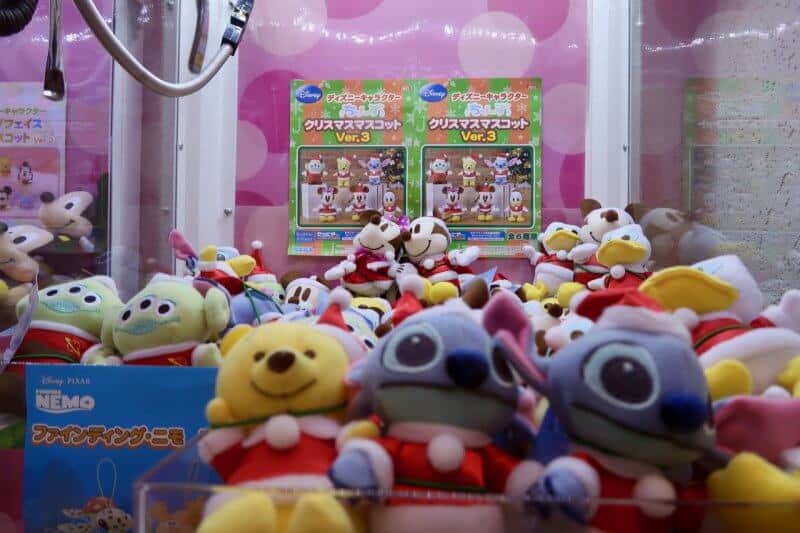 The courtyards on both the “Wish” and “Discover” sides are simple square gardens with a few displays. “Discover” has a large ship (which lights up at night ) and a small lounge area with a treasure chest. “Wish” features select floats from the Tokyo Disneyland Electrical Parade Dreamlights. Overall, the courtyards are nice, but I wouldn’t call them “spectacular.” 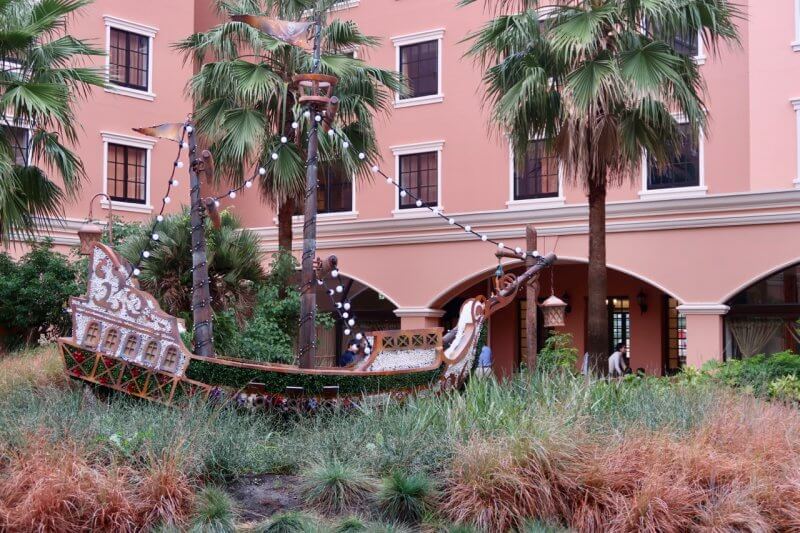 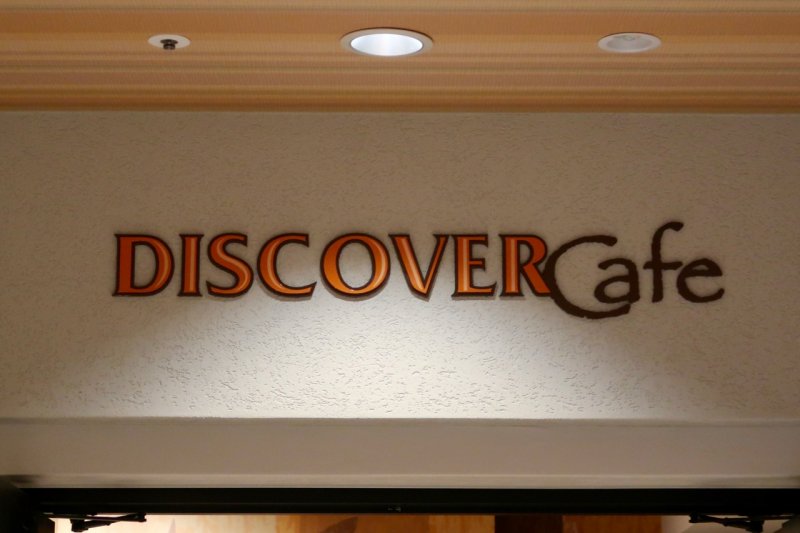 Both sides offer a breakfast buffet (06:00-10:00) for ¥1,300 (~$11.30USD) for adults and ¥900 (~$8USD) for children. You buy your tickets from a vending machine just outside the restaurant. They serve fresh coffee, juice, pastries, sausage, eggs, and soup. Overall, even at its cheap price, I think it’s not worth the money. While the coffee and pastries are delicious — the coffee is an espresso machine that grinds the beans for you — the rest of the buffet is bland and feels nothing more than a cheap continental breakfast. 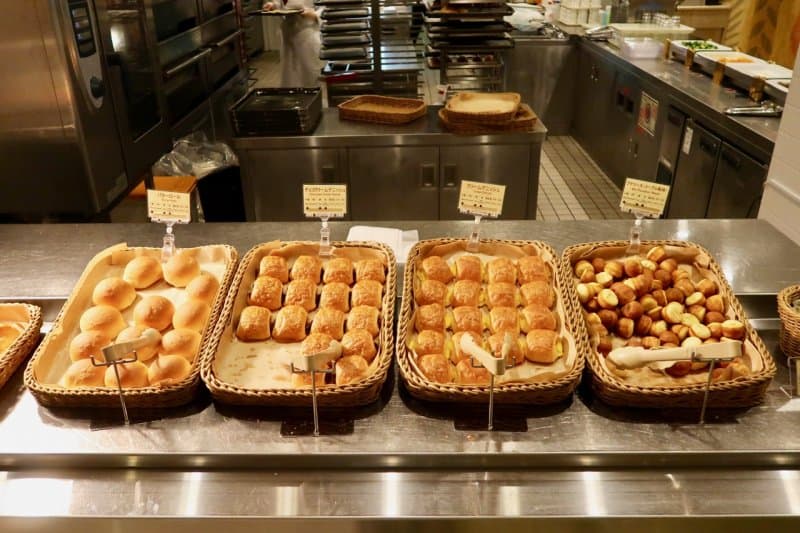 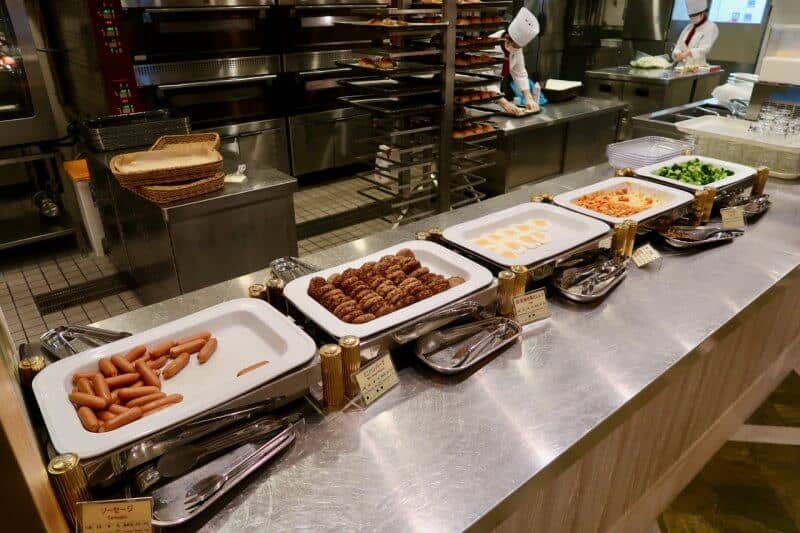 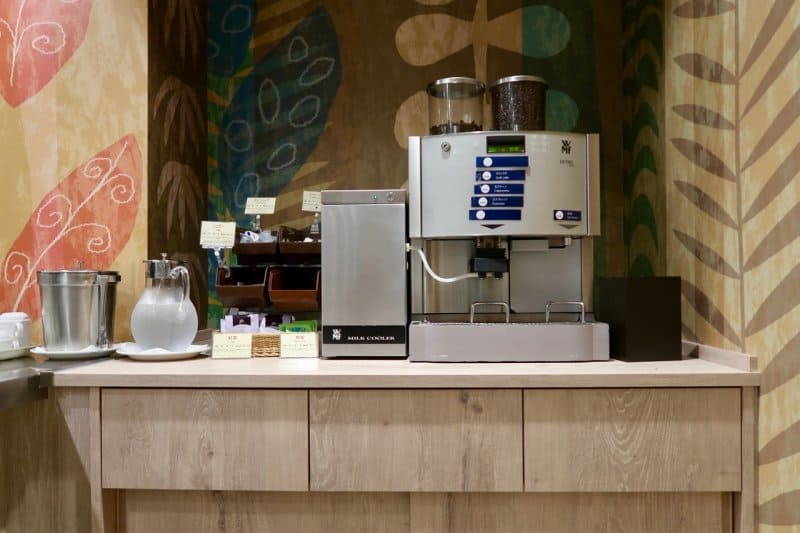 The Café is a large open cafeteria with some wallpaper. Nothing about this had that Disney Magic, except for the napkins that were placed to create Mickey Ears — which isn’t saying much. 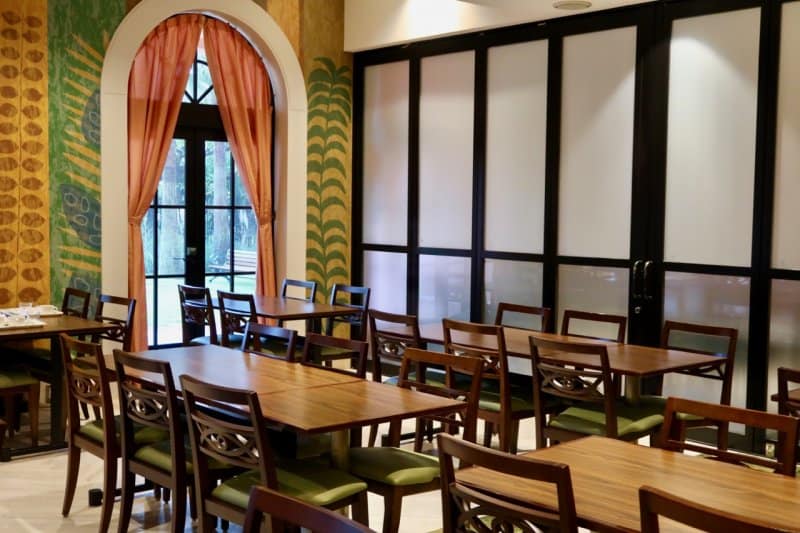 You’re better off getting coffee and a small breakfast at the convenience store for half the price. Just a warning, you are at the mercy of the stock of the store, so you may not find what you want. Check first to see if there is anything you’d like to eat. If not, then the buffet is a last-ditch effort. You can fill up on parties, coffee, and soup. 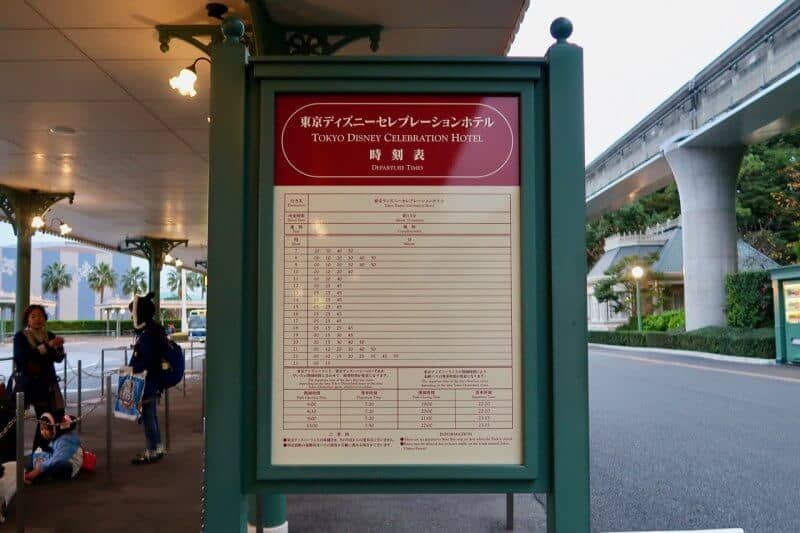 As a guest, you receive the “Happy 15” entry to the parks — 15 minutes early entry. When you check-in, the Cast Member asks you which park you want the early entry for. You also receive other perks, such as guaranteed park entry and park ticket sales.

Another notable perk is the ability to make restaurant and dinner show reservations online in English. Meaning, you can make a reservation for Magellan’s, The Diamond Horseshoe Presents “Mickey and Company,” and other table service restaurants online. 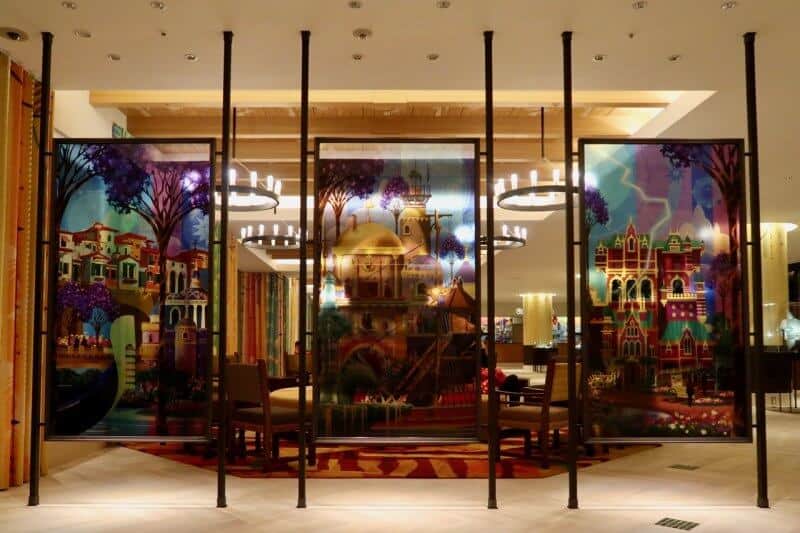 The only difference between these two sides is the theming. Other than that, everything else is the same (including pricing). My personal preference is the “Discover” side since that appeals to me with the adventure theme. If you have small children or someone in your party who loves Alice in Wonderland or the “fantasy” aesthetic, then the “Wish” side is a good choice.

So, choose based on what theme you prefer. 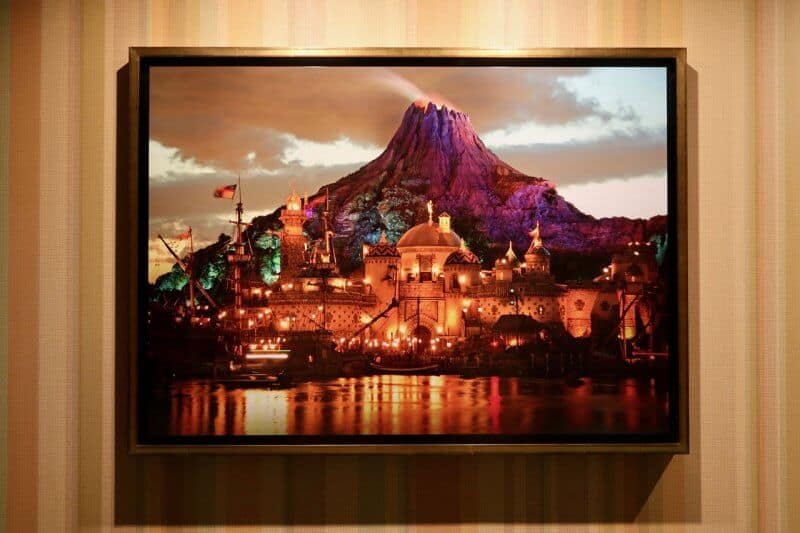 Here’s an overview of everything discussed above broken into the good and the bad: 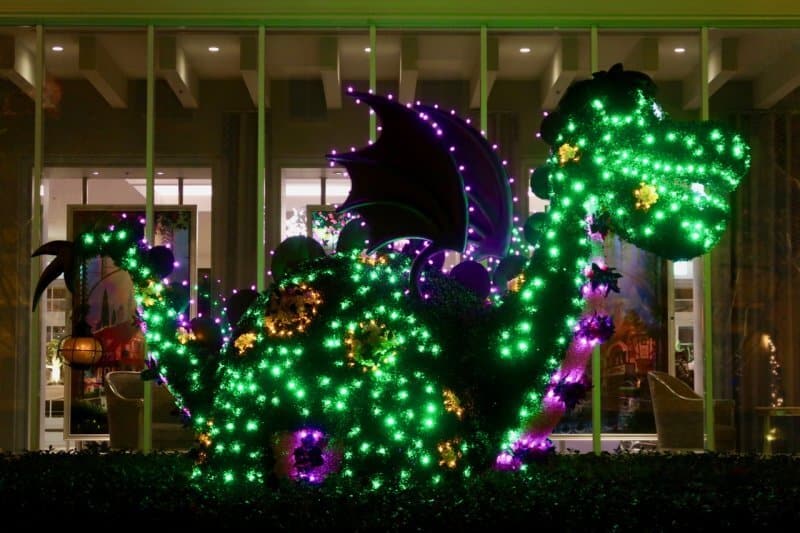 With that said, if you can get the hotel on the lower end for ¥23,000 (~$200 USD) a night and want that Disney experience and Hotel Guest Perks, then it’s worth considering.

If you’re wanting to save money, stay on resort, then I recommend the Hilton Tokyo Bay or Sheraton Grande Tokyo Bay Hotel (which are on the monorail loop at the Resort). They often have sales and I have come across stays for as low as ¥8,000 (~$70 USD) a night.

In short, the parts of the hotel where they put the effort in shows wonderfully, but where they didn’t is noticeable. It’s hard to recommend this hotel for the current price.

For more on hotels at Tokyo Disney Resort, read our Tokyo Disney Hotel Guide and our list of hotel reviews and recommendations.