Tokyo Disney Resort has announced their plans to celebrate the 35th Anniversary. Many of you were asking us on Facebook, Twitter, and Instagram about the details for the anniversary, and now we know the details (sorta)!

The “Tokyo Disney Resort 35th Anniversary ‘Happiest Celebration!'” starts April 15, 2018, until March 25, 2019, at both Tokyo Disneyland and Tokyo DisneySea. The celebration includes limited time merchandise, food, decorations, and brand new entertainment! We have all the details we know so far.

Both parks celebrate all year with special offerings for all seasons throughout the year — including Christmas and Halloween. 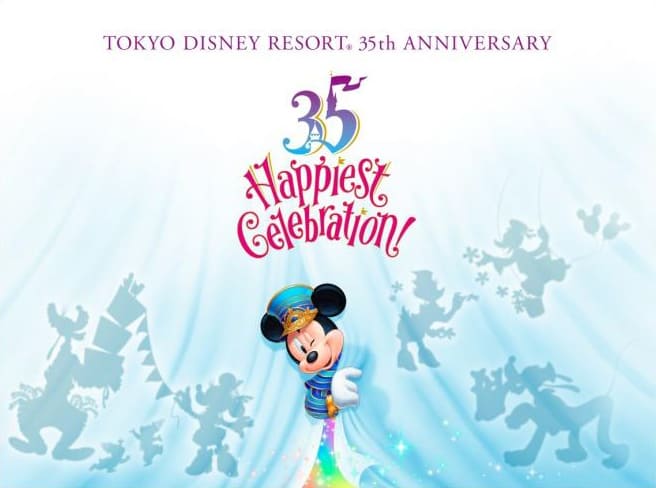 On April 15, 1983, the Kingdom of Dreams and Magic, Tokyo Disneyland® Park, opened its gates to the public and grew from a single theme park into a resort that includes Tokyo DisneySea® Park, four Disney Hotels and more. Tokyo Disney Resort has continued to be a place filled with happy moments where people of all ages can have wonderful experiences, a place “where dreams come true.” In 2018, Tokyo Disney Resort will create even more happiness and even brighter dreams as it celebrates 35 years of fun and joy with the “Happiest Celebration!” Following the anniversary event, the new Tokyo DisneySea attraction Soarin’ (tentative name) will open in 2019, and in 2020 Guests can look forward to the completion of the large-scale development at Tokyo Disneyland.

Tokyo Disneyland gets its first new parade since the 30th anniversary back in 2013. The new parade (we don’t know the name yet) premieres April 15, 2018, to start the celebration. This new parade will feature “Mickey Mouse and the Disney Friends on colorful floats as they take Guests to a magical world of dreams born from Disney imagination. ”

There’s no information if the current daytime “Happiness is Here” is being replaced or not.

While there is no set date yet, we know that “it’s a small world” reopens in Spring 2018 with over 40 new characters added to the attraction.

With the recent announcement with “Once Upon a Time” coming to an end, it was inevitable a new show would take its place. While we don’t know the name of the show yet, it’s said to be on a grander scale than any show we’ve seen at the park. Cinderella Castle is transformed with Mickey Mouse as a music conductor with a spectacle of light and music.

Once we know more details, you can find it right here at TDR Explorer!

All information and photos from the Oriental Land Co. Ltd. press release and the official Tokyo Disney Resort Blog.