Are you planning on visiting Tokyo Disney Resort for Halloween this year? You’re in luck, details for “Disney’s Halloween” are now available! Not too much different from last year, but a few updated things to note.

Disney’s Halloween at Tokyo Disney Resort starts September 8 through October 31, 2017. We’ll report on the full list of merchandise & food items once they become available. For now, here are the highlights from the official press release from the Oriental Land Company. 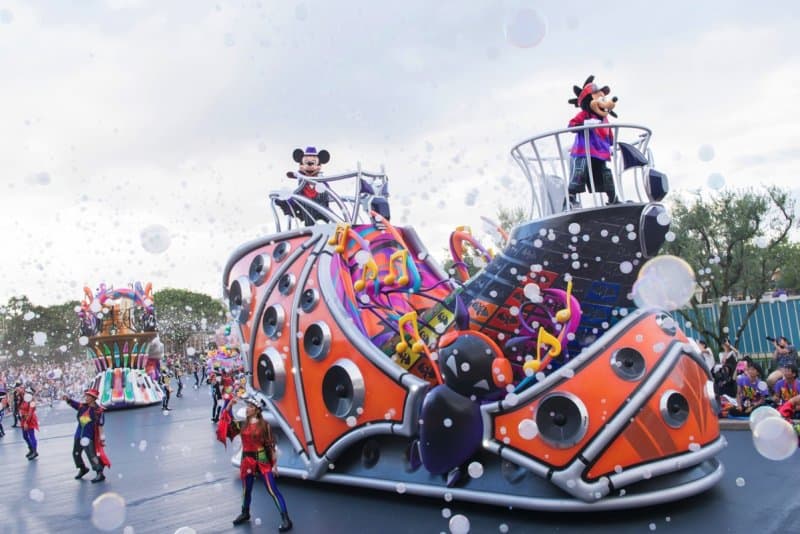 Tokyo Disneyland presents Halloween Pop’n LIVE again this year as their main parade with updated music and costumes. Along with decorations in the World Bazaar, the Hub area in front of Cinderella Castle, and throughout the park!

The special event at Tokyo Disneyland Park will again be themed to a Halloween music festival. Mickey Mouse and his Disney Friends join ghost and skeleton “stars” in entertaining Guests with a variety of amusing and exciting musical performances in “Halloween Pop’n LIVE” presented along the parade route. Besides new music this year, Mickey Mouse, Minnie Mouse, and their friends will wear new costumes. Also, an MC will appear for the first time to take the excitement to a higher level. To increase the sense of being a part of the festival, the Park will offer special merchandise such as a “music festival” towel that Guests can wave together with the Disney Friends, the dancers and other Cast Members. 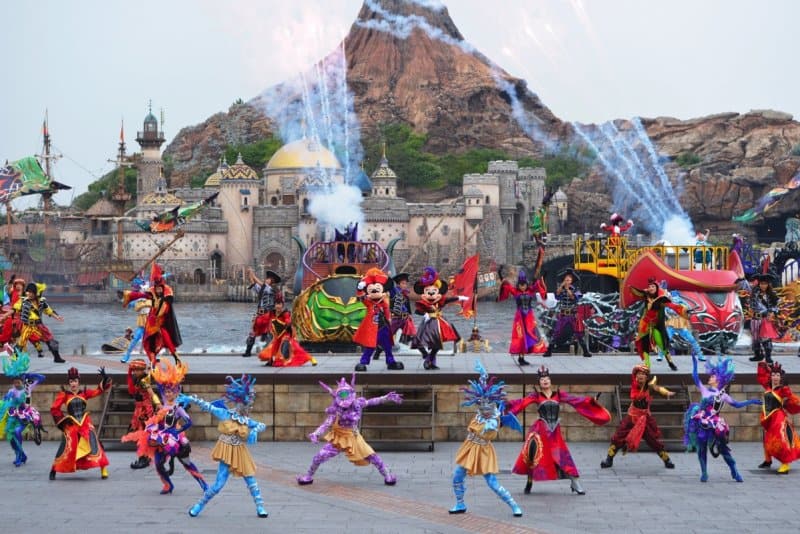 For the third time “The Villains World” is the main show for Halloween which features various villains such as Maleficent. Mickey and Friends join the Disney Villains in a themed party in the Mediterranean Harbor for an energetic performance.

Various locations throughout Tokyo DisneySea are decorated with the Villains theme! 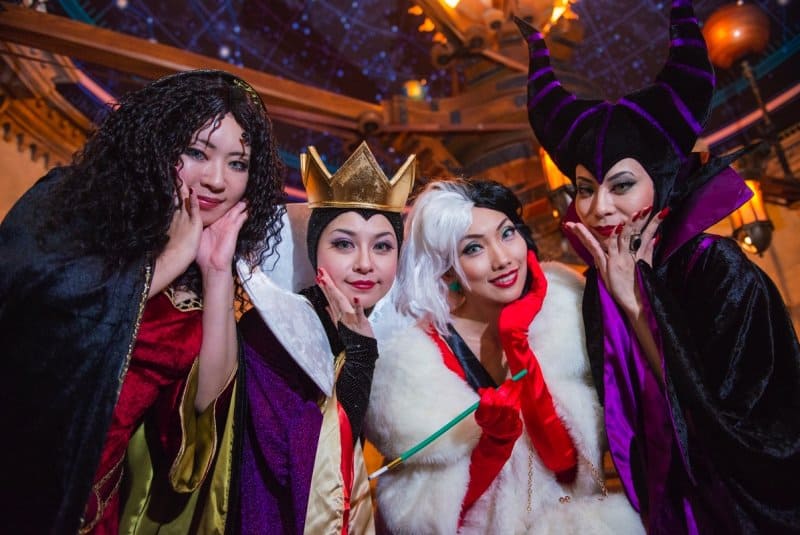 This will be the 20th year that “Disney’s Halloween” has been held, and for the first time both Parks will allow Guests of all ages to dress up as Disney Characters on any day during the special event period. Guests will be able to immerse themselves in the world of Disney even more, as they get into the Halloween spirit by dressing up with simple character touches or going all the way with full character costumes.

Check out our Guide to Halloween Costumes Days for more information. 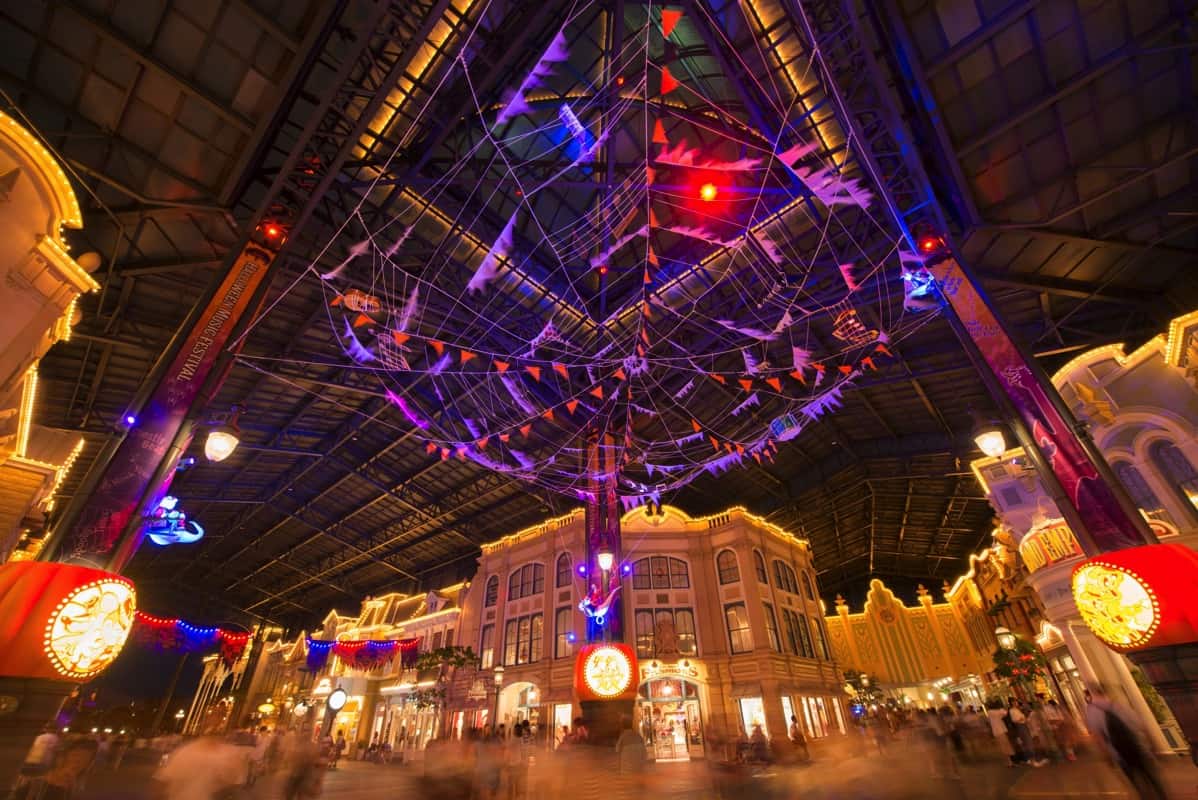 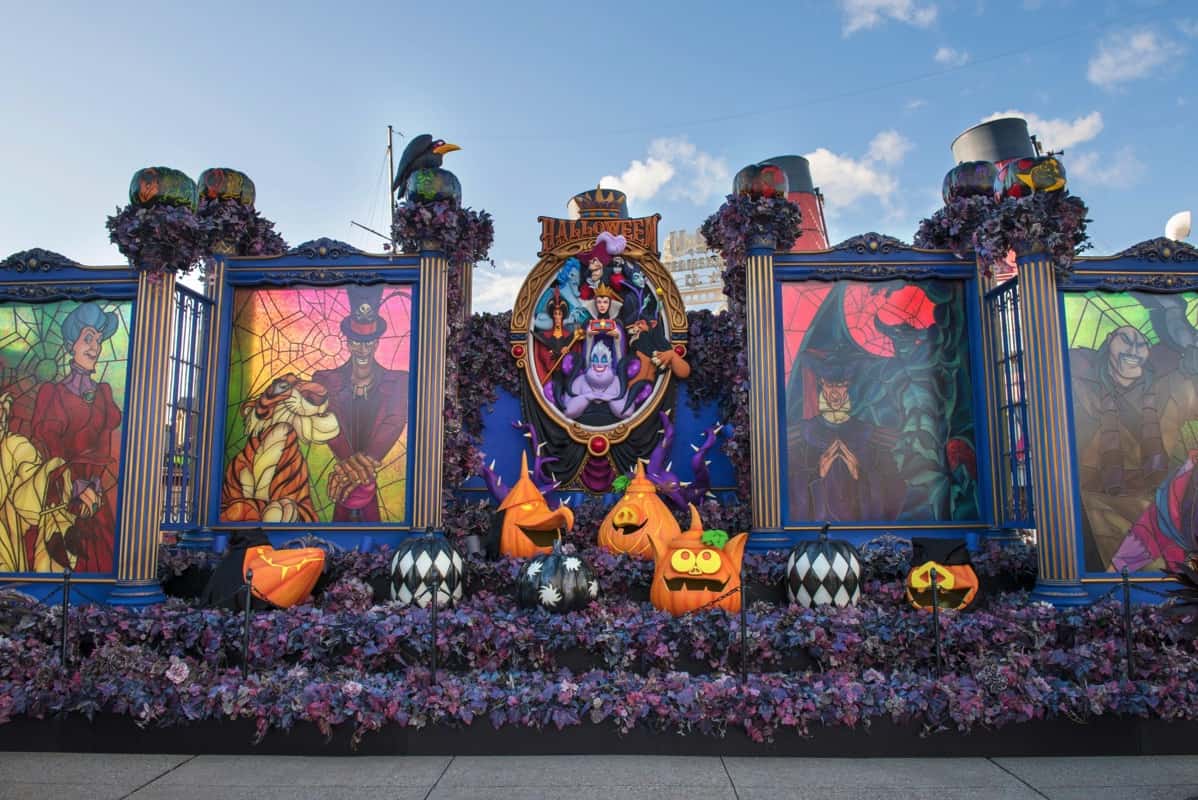 You’ll find unique decorations at both Parks. Tokyo Disneyland offers a “music festival” as their theme (which ties into the Halloween Pop’n LIVE parade) while Tokyo DisneySea focuses on the Disney Villains.

Tokyo Disneyland will have decorations showing the Disney Friends and the cheerful ghosts as entertainment stars putting on a musical performance. In the center and along the streets of World Bazaar, cobwebs, ghosts, huge jack-o’-lanterns and other Halloween decorations will be set up, enhancing the Halloween mood even more. Again this year, Westernland, Fantasyland, and Toontown will be decorated with pumpkins, ghosts and more for a lively and cheerful atmosphere. And after dark, Cinderella Castle and its surroundings will be lit up to enhance the Halloween atmosphere.

At Tokyo DisneySea, Guests will find decorations themed to a cool and eerie Halloween with the Disney Villains. Inside the Park Entrance, Guests will feel that they are entering the world of the
villains who have gained even more power. This year, at Water Street in American Waterfront, Guests will find decorations with the motif of the briars summoned by Maleficent. Decorations in Mediterranean Harbor and American Waterfront will be based on the Disney Villains and
create a mysterious atmosphere, while over in Arabian Coast, decorations with motifs of Jafar can be found again this year. 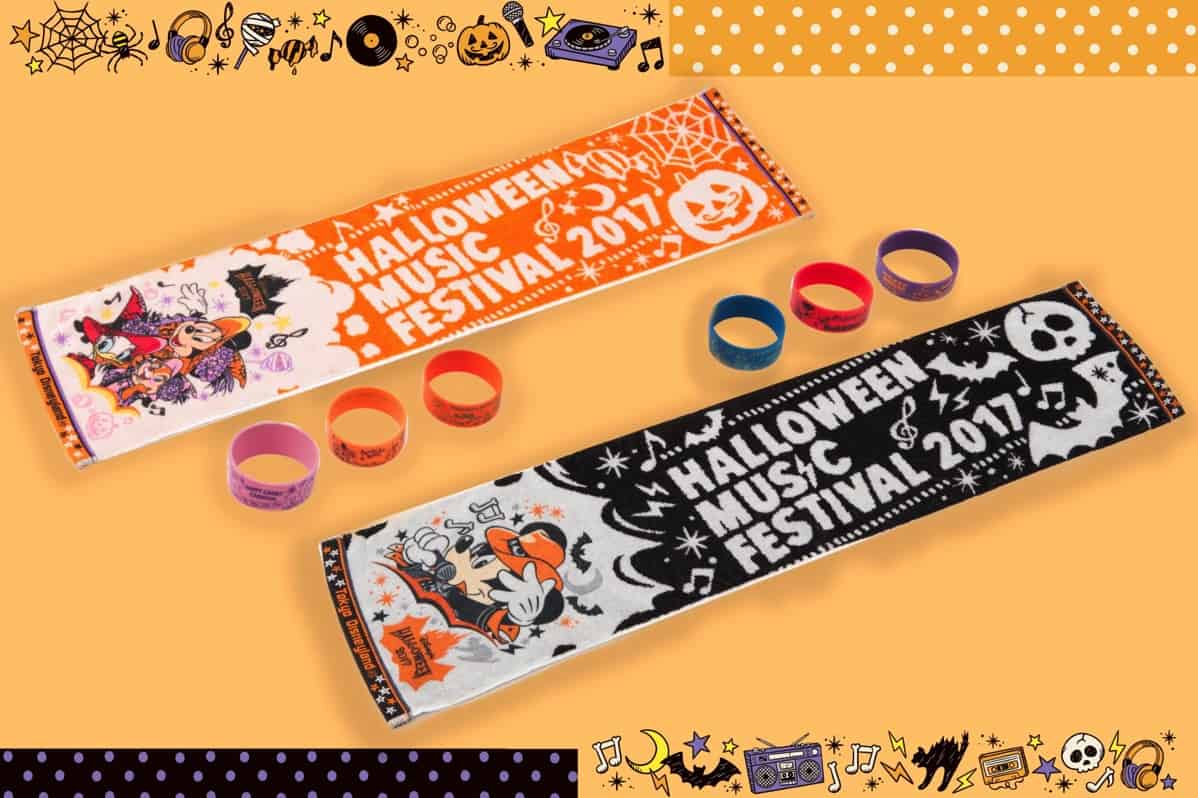 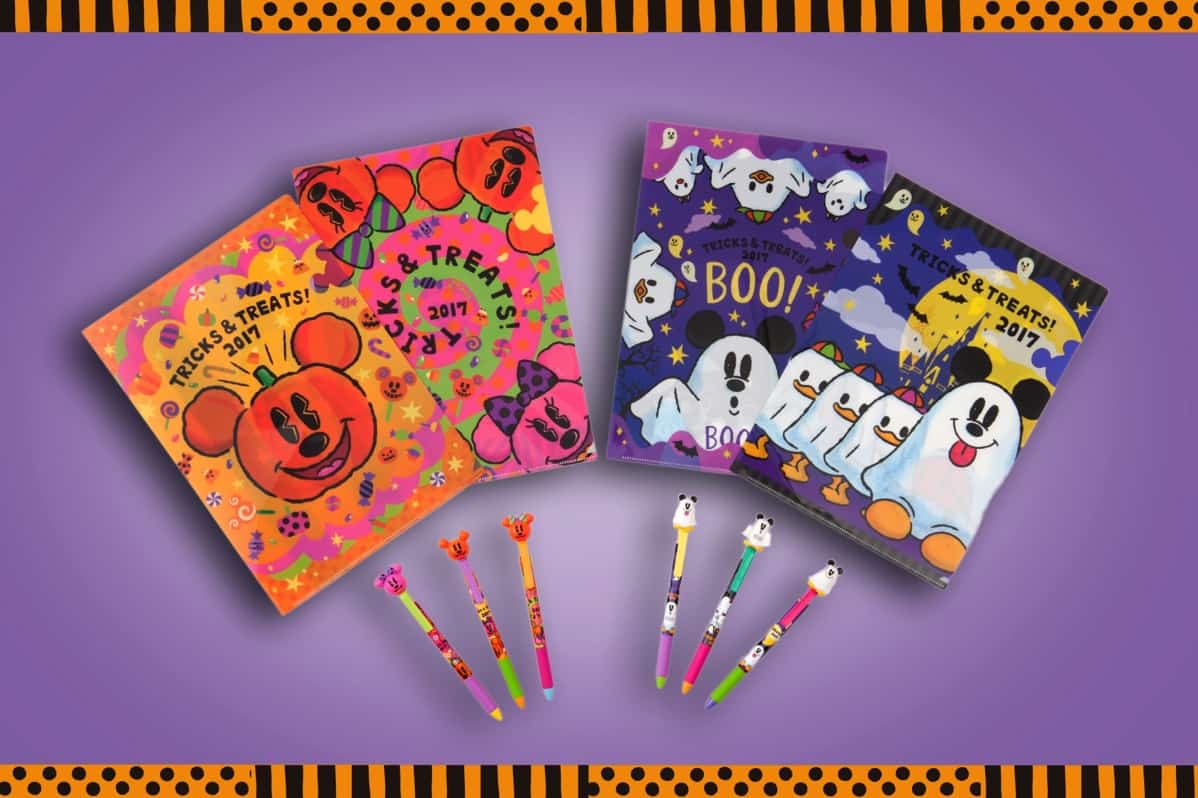 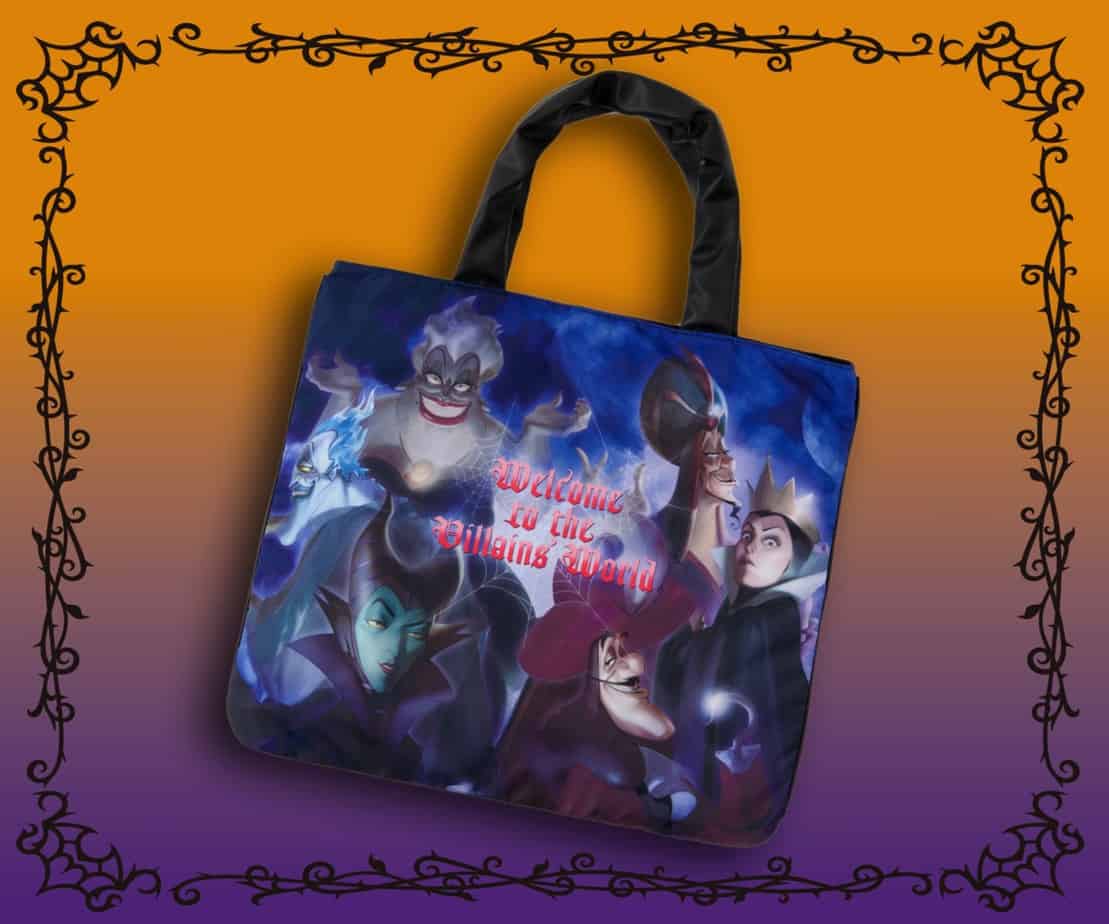 It’s not a special event without merchandise! While we don’t know the specifics just yet, we do know there 35 different types of items available at specific to each Park (including Duffy-related items) and around 45 items found at both Tokyo Disneyland & Tokyo DisneySea.

At Tokyo Disneyland, about 35 different types of special merchandise will be offered to go with the “Halloween Pop’n LIVE” parade. Some items have cute motifs based on the parade floats, while others have a cool, rockin’ design. Again this year, Guests can join the Disney Friends, the parade dancers, and other Cast Members by waving towels or wearing wristbands and other items that can be used to enjoy the fun of the “music festival.”

At Tokyo DisneySea, Guests will find about 35 different types of items designed with the Disney Villains from the show, “The Villains World.” Also available will be 8 different types of merchandise showing Duffy and his friends, including their newest friend StellaLou, dressed in costumes themed to Halloween confections.

Available at both Tokyo Disneyland and Tokyo DisneySea will be about 45 different types of merchandise including items with designs of Mickey Mouse and his friends wearing
sheets to look like ghosts and big, pop designs of pumpkins. 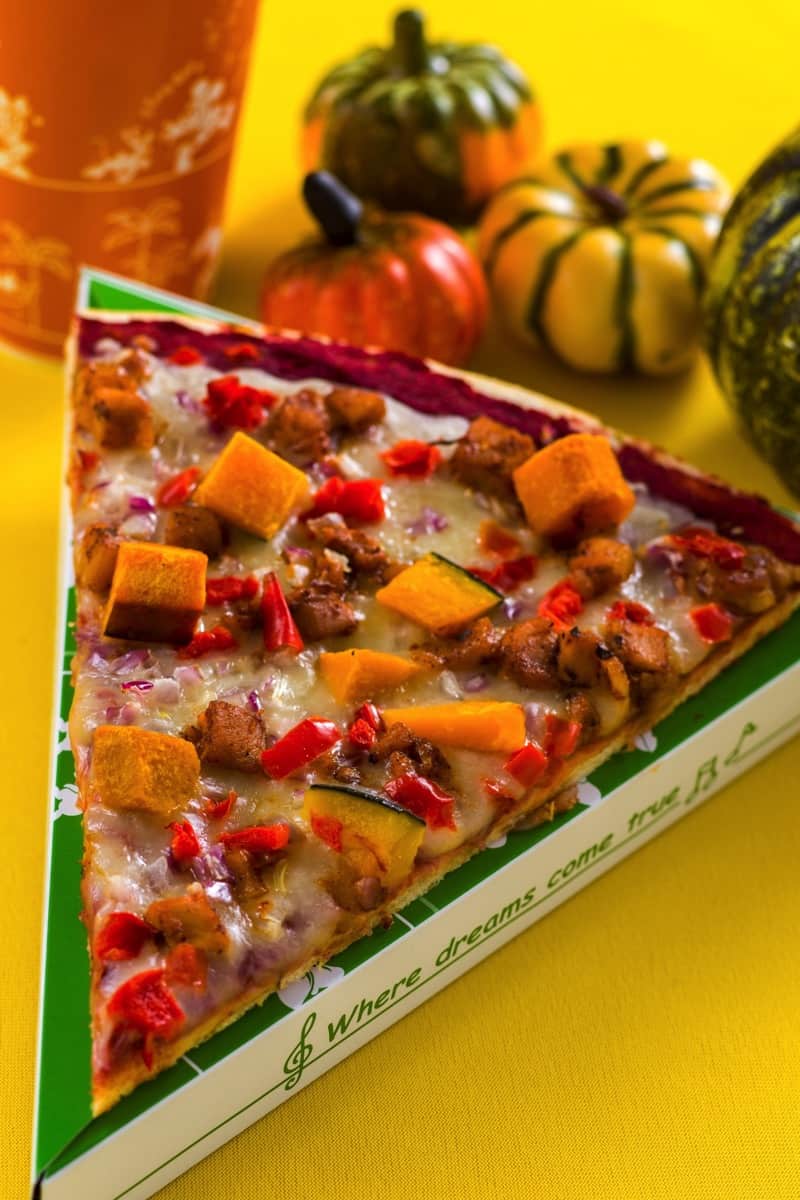 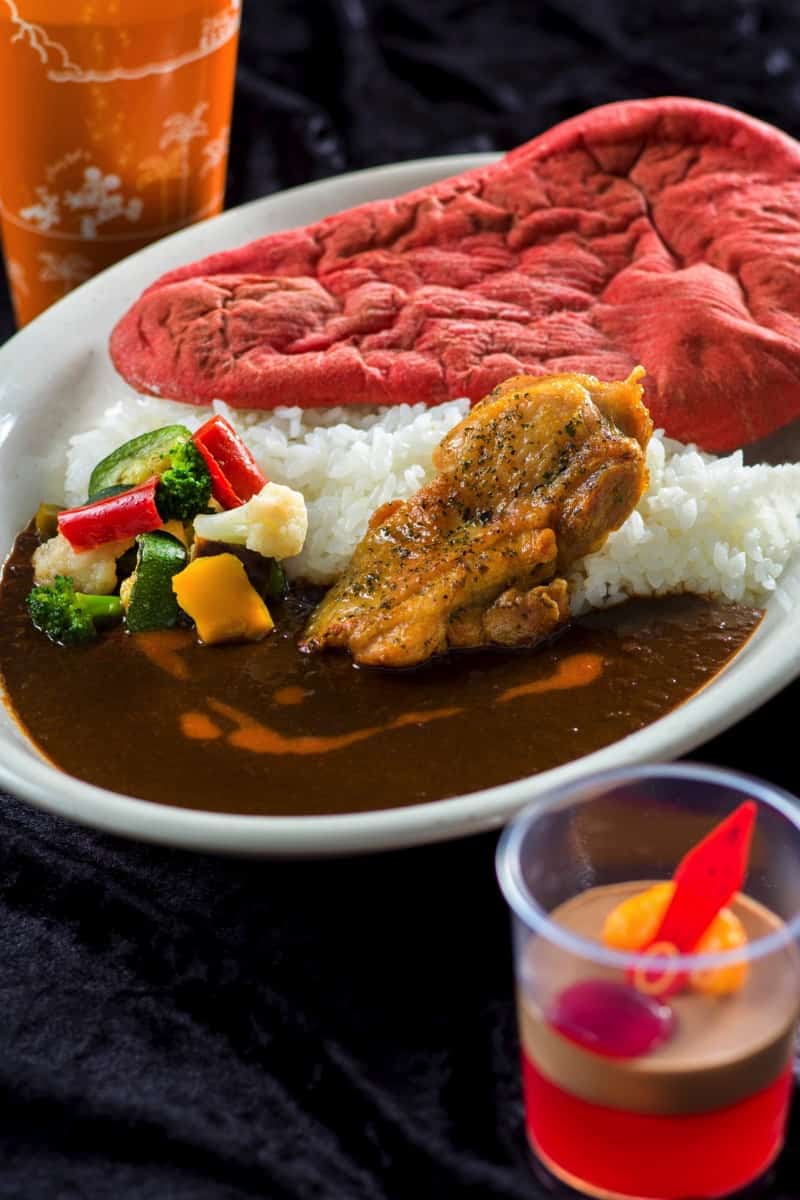 No seasonal event is complete without limited time snacks and food! Once again various themed food items are available for guests to enjoy starting September 1, 2017.

At Tokyo Disneyland, new fun and easy to eat menu items will add to the ambiance of the Halloween music festival. Guests will find a pumpkin and purple sweet potato pizza at Captain Hook’s Galley and an eye-catching menu item perfect for eating on the go at The Gazebo. In addition, the popular Halloween special set featuring a jack-o’-lantern design will be available again this year at Plaza Pavilion Restaurant.

At Tokyo DisneySea, special set meals incorporating motifs inspired by the Disney Villains will be offered. Casbah Food Court will serve a special set that comes with a dessert reflecting the colors of Jafar’s costume. Guests can also choose a lassi drink that comes in two intriguing colors. To be served at Nautilus Galley for the first time are black-and-red Gyoza Sausage Buns with a design inspired by the Queen of Hearts. And at Seaside Snacks, the popular Ursula-inspired Special Ukiwa Bun (spicy shrimp and pork) will be sold again this year. At both Tokyo Disneyland and Tokyo DisneySea, Guests will find Mini Snack Cases that are only available during the Halloween special event.