Once you’ve stayed on-resort at a Disney hotel, it’s hard to imagine staying anywhere else when exploring the parks.  But long at the top of my bucket list of in-park stays has been the desire to lodge at one of the many “Disneyland Hotels” in the world.

In Anaheim, Paris, Tokyo and Hong Kong, this is the flagship hotel, the crown jewel.  It is often the most five-star of the five-star experiences you can encounter in a Disney holiday.  And it is not cheap.

Granted, Disneyland Hotel has come a long way from its primitive roots. 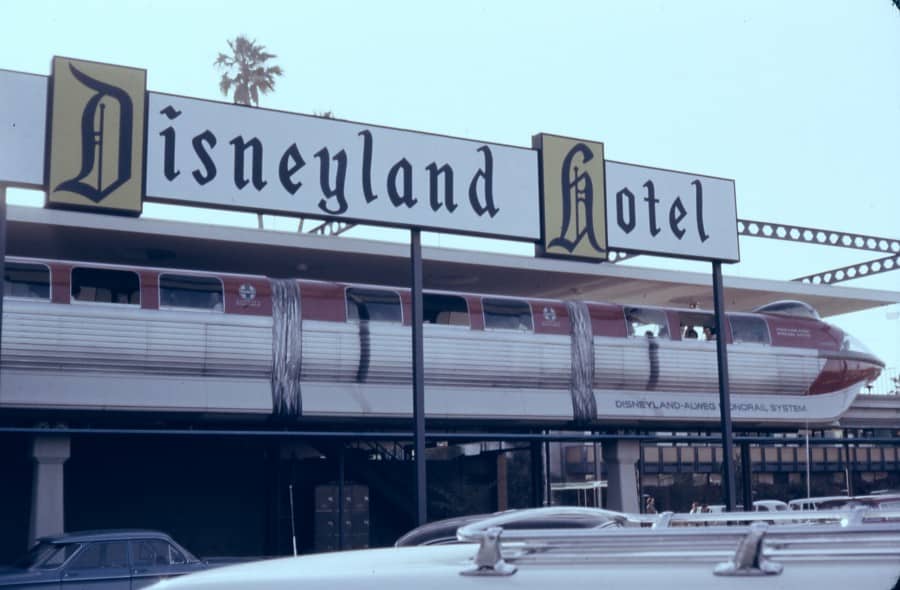 On October 5, 1955, Jack Wrather opened the first “Disneyland Hotel” on a plot of land next to the Anaheim park.  It was a motor hotel – as was fashionable in the day – and after numerous expansions boasted more than 300 rooms by the 1960s.  In 1988, four years after Wrather’s death, his company (and subsequently the Disneyland Hotel) was bought out by the Walt Disney Company and the namesake hotel finally became owned by the Mouse.

Through renovation projects in the late 1990s, the Walt Disney Company razed the original site and has created a high-end luxury experience.  Unlike themed hotels such as Paradise Pier or the Grand Californian, the Disneyland Hotel’s theme is to give you the purest experience of the “magic” the parks have to offer.  Your wish is their command.

In 1992, the Disneyland Hotel Paris opened its doors along with the EuroDisney resort.  It serves the unique function of being the passageway every guest travels through to enter the Disneyland Paris park.  Its pink exterior and deep red capped roof may more closely resemble the Grand Floridian at Walt Disney World than its namesake in California, but from a tour through its public spaces, you can tell this is a premium experience. 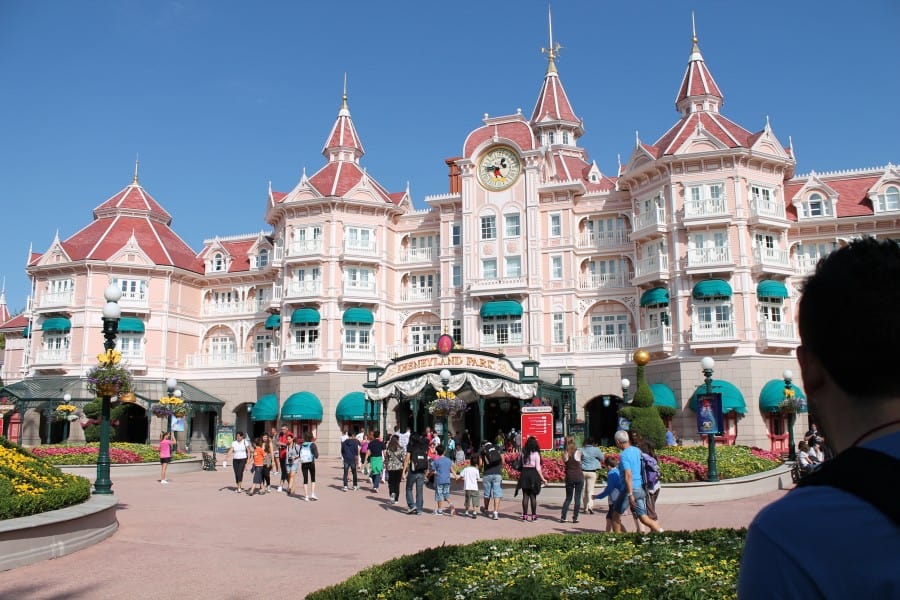 The pink stucco and red roof of Disneyland Hotel in Paris more closely resembles the architecture found at the Grand Floridian at Walt Disney World in Florida.

Another Disneyland Hotel would be constructed at the theme park in Hong Kong in 2005 before, finally, in 2008 the Oriental Land Company would open the doors to the Tokyo Disneyland Hotel.  The sprawling structure features 700 guest rooms, and the signature “premium” Disneyland Hotel style and feel that has become familiar at all the other resorts. 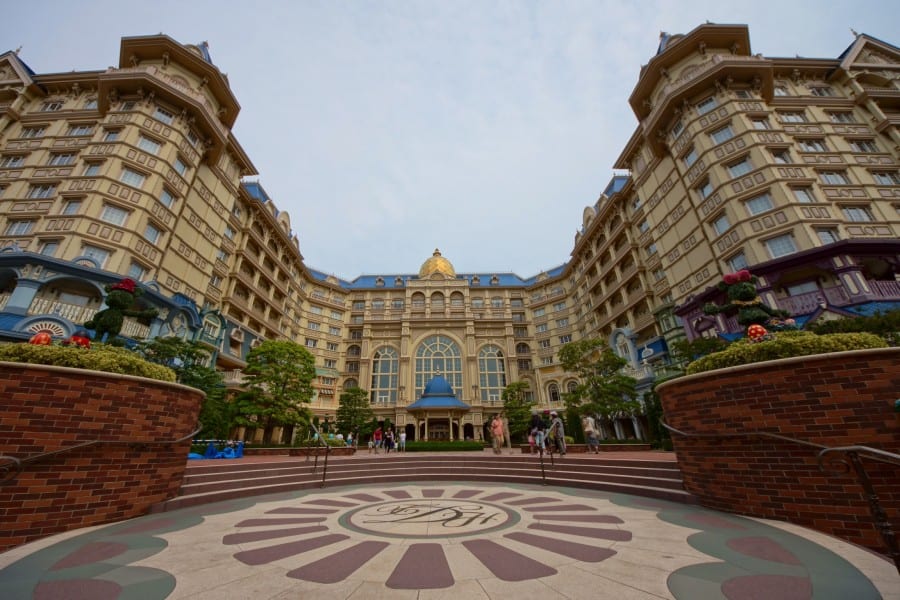 When Chris and I were planning a Tokyo Disneyland adventure during my most recent trip to Japan, the conversation came up about staying on resort.  I opened the hotel reservation system and started looking around to see what it might cost.

There are two other hotels on the Tokyo Disney Resort property owned by the Oriental Land Company.  Disney’s Ambassador Hotel has a very similar vibe to Hotel New York at Disneyland Paris.  It is a more economical option, yet gives you all the benefit of being “in the parks.”  Disney’s Hotel Miracosta is also on-site and overlooks Tokyo DisneySea (much in the same way part of the Grand Californian peeks in to Disney California Adventure).  The opulence of Miracosta isn’t much different from Tokyo Disneyland Hotel – and the price was comparable.

I realized if we were going to spend the money to stay at the Ambassador or the Miracosta, it wouldn’t cost much more to go all the way and cross the “Disneyland Hotel” experience off our bucket lists.  And so, the reservation was made.

For a single night in a “standard superior room” on floors 1-3 (we were on the first floor with rooms on it), we paid ¥36,000 or about US$350.  To put the cost in perspective, a comparable room at Disneyland Hotel in Anaheim would cost about $450. 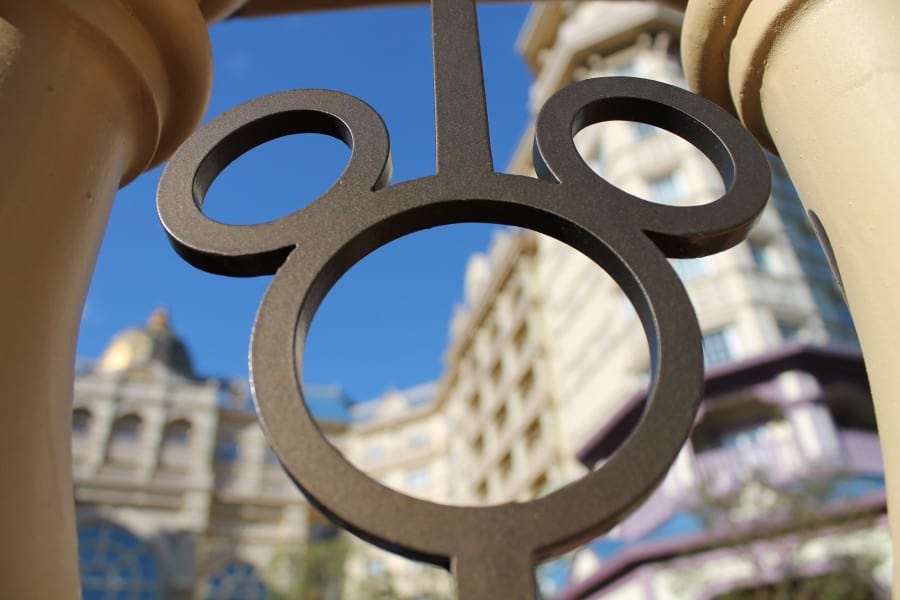 Staying in the Mouse’s house.

We arrived at the resort via JR Rail’s Maihama Station and made our way to the lobby.  No sooner did we step inside, a member of the bell staff took our bag and directed us to the check-in line.  After swiping the credit card (with great difficulty, I might add – make sure your magnetic stripe is working properly!), we were asked to have a seat in the lobby.  A couple of minutes passed before an English-speaking member of the bell staff called our name and showed us to our room.

After a quiet walk through a labyrinth of corridors (I was savouring the moment as was Chris!), we arrived at the door to our room.  As the door unlocked and I crossed the threshold, I gasped.  It was more than I could imagine.  (I also got the sense the bellhop had seen this reaction numerous times before.)

The very first view inside our room at Tokyo Disneyland Hotel

I’ve stayed at nice hotels before.  Like really, really nice, five-star hotels.  But this… this was something else.

There was a delicate nature to the details of the room.  The carpet seemed more plush, the bedding seemed more lush, and after spending a week in Chris’ hallway-sized Japanese apartment, this felt like a mansion.

Upon further research, I’ve come to believe that the room we were given by the hotel staff wasn’t the simple “standard superior room” we had paid for, but rather something akin to a “deluxe room” which costs about ¥10,000 (or US$100) more per night than what we had paid.  It really was a steal of a deal. 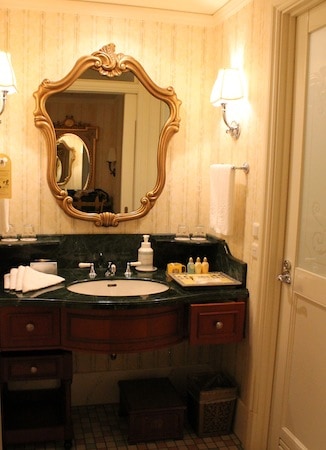 Time to get squeaky clean!

To the right of the entryway was the shower room, vanity and water closet.  For North Americans unfamiliar with Japanese living setups, the toilet room is always separated from everything else (much like in Europe.)  The shower room is a water-proof room which acts as large shower stall.  The vanity and preparation area is located outside both of these rooms – very similar to the bathroom setups found at the Walt Disney Resort. 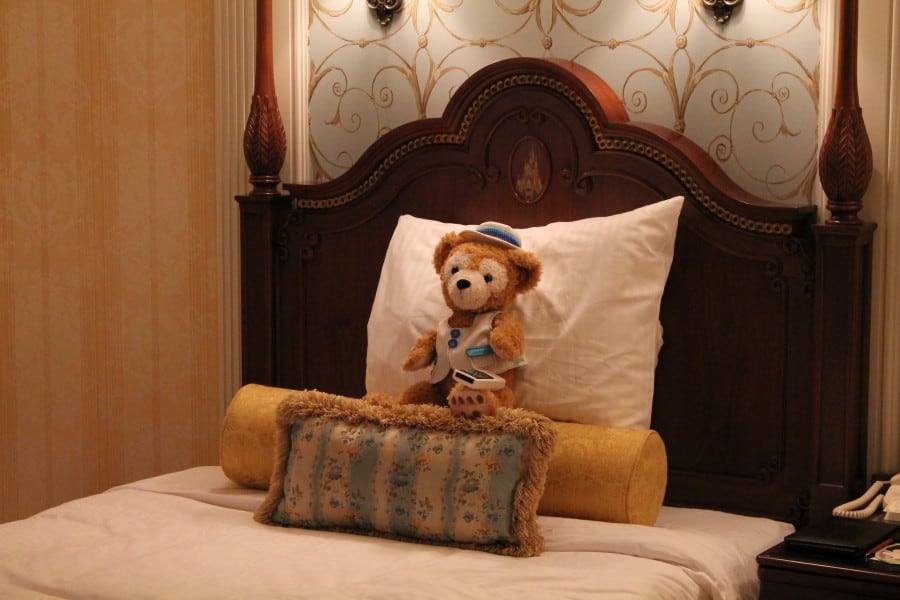 Duffy kicks back in bed and watches some TV before heading off in to the parks.

The room came with two double beds which were a bit firm by North American standards, but provided a great night’s rest.  One detail I loved was the iconography of Cinderella’s Castle on the headboard. 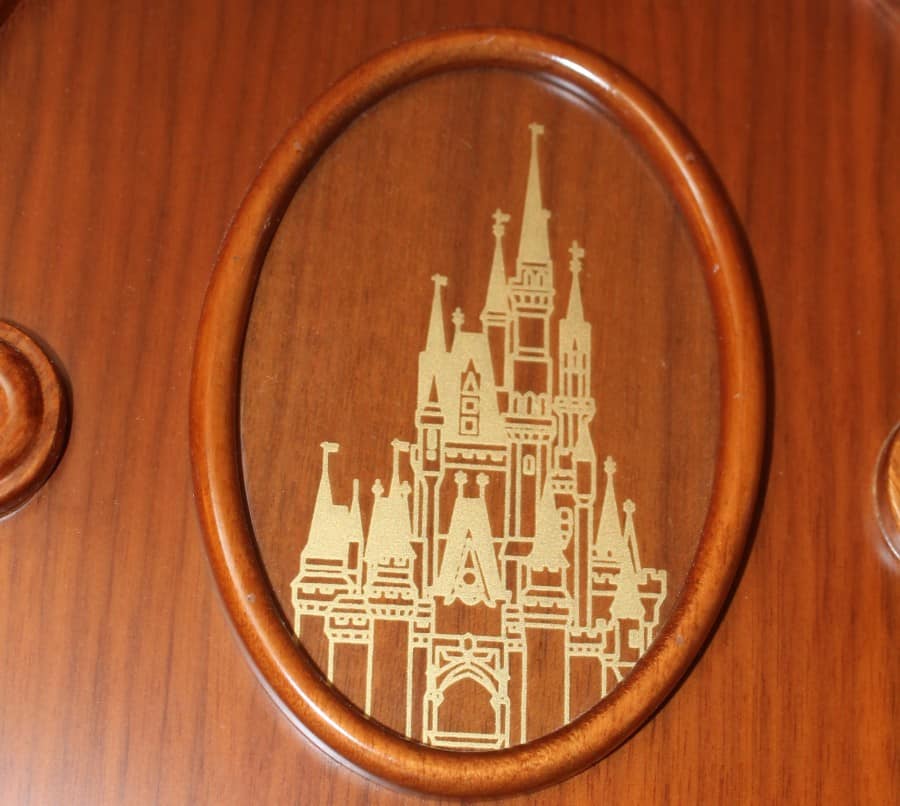 Past the bedroom was a highly unexpected surprise – a lavish sitting room with a television, two chairs, a couch, and a fantastic view of Cinderella’s castle. 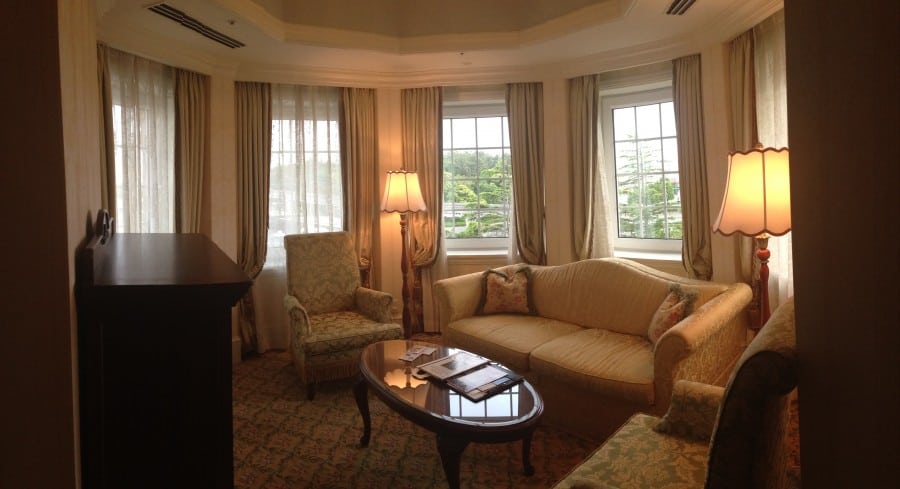 An unexpected surprise – a sitting room with a view of Cinderella’s Castle! 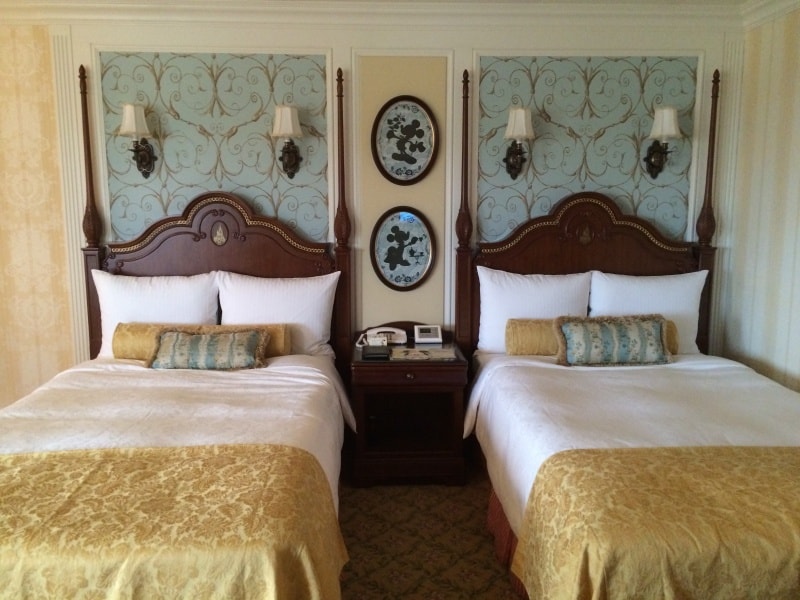 The beds are much more firm that what you are used to. 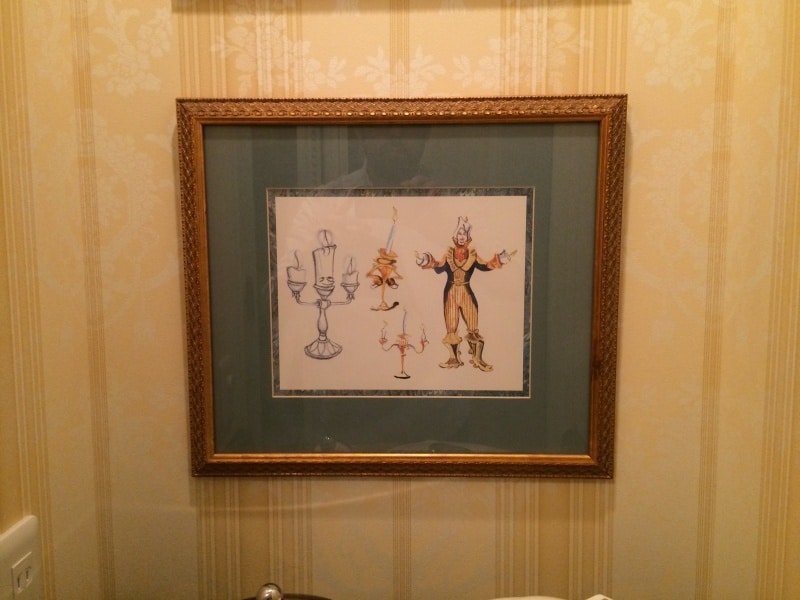 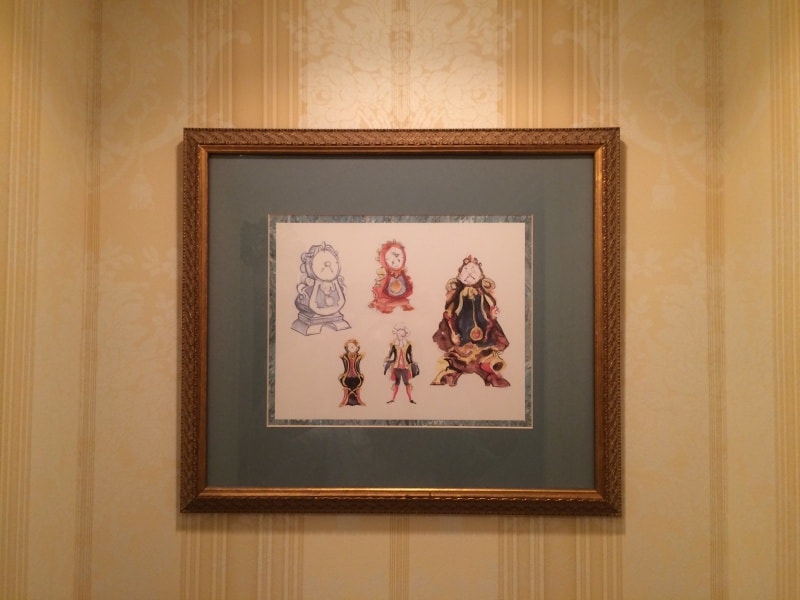 Photos on the wall 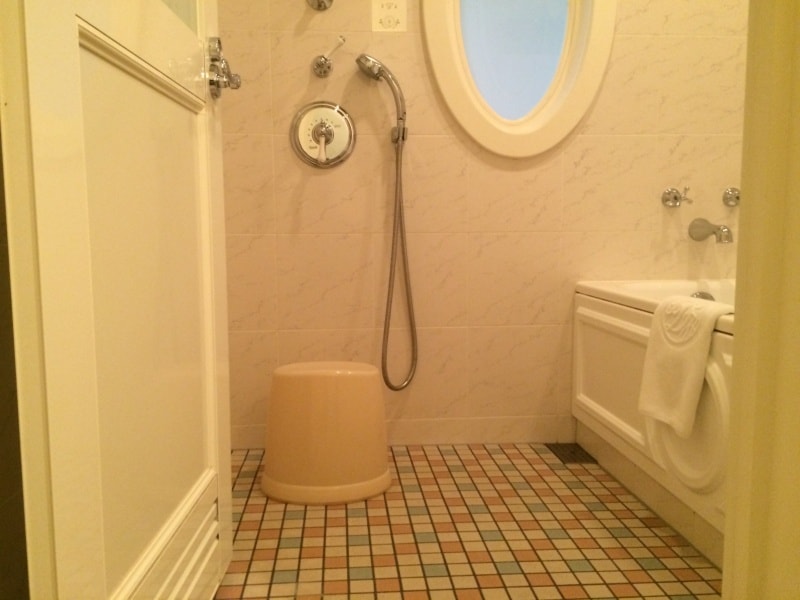 Huge shower room with a mirror which brings in natural light. 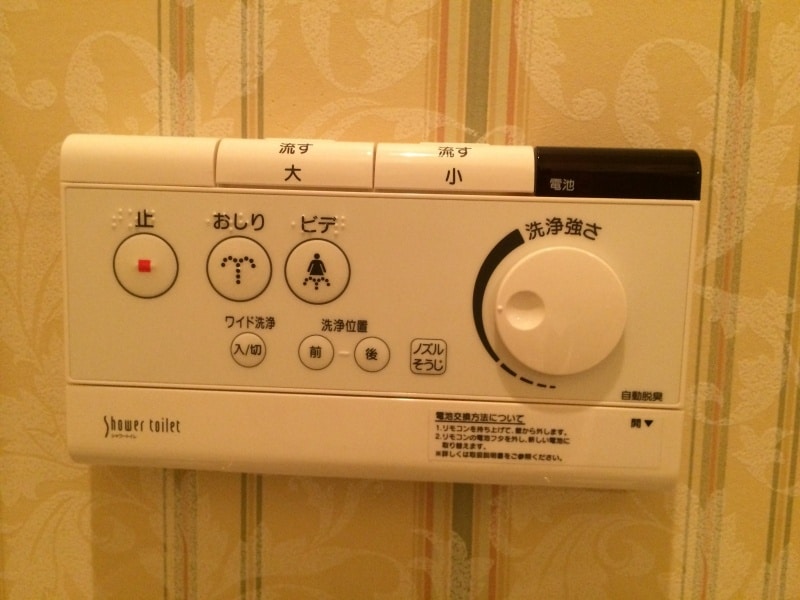 No hotel in Japan is complete without the “super” toilet. 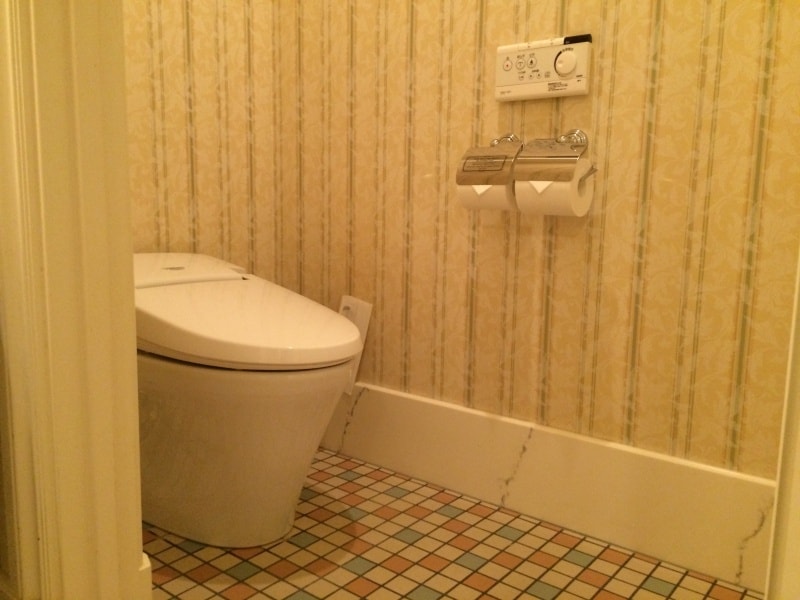 The toilet is in a separate room from the rest of the bathroom! 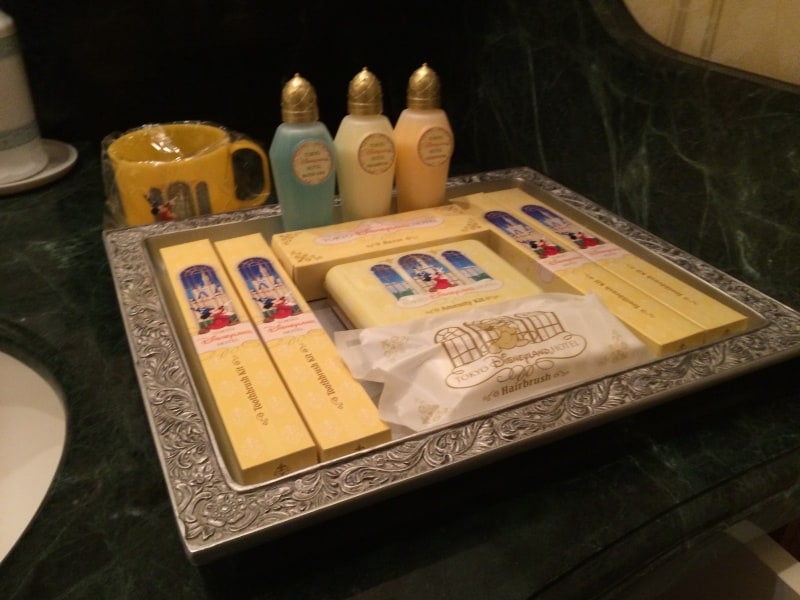 If you forgot anything, it is likely here in this amenity kit. Don’t feel bad if you take it all home with you!

There would be no watching television in this room – we wanted to savour the view of the park.  Windows in the little sitting nook opened, and we were able to let in fresh air and the sounds of the park. 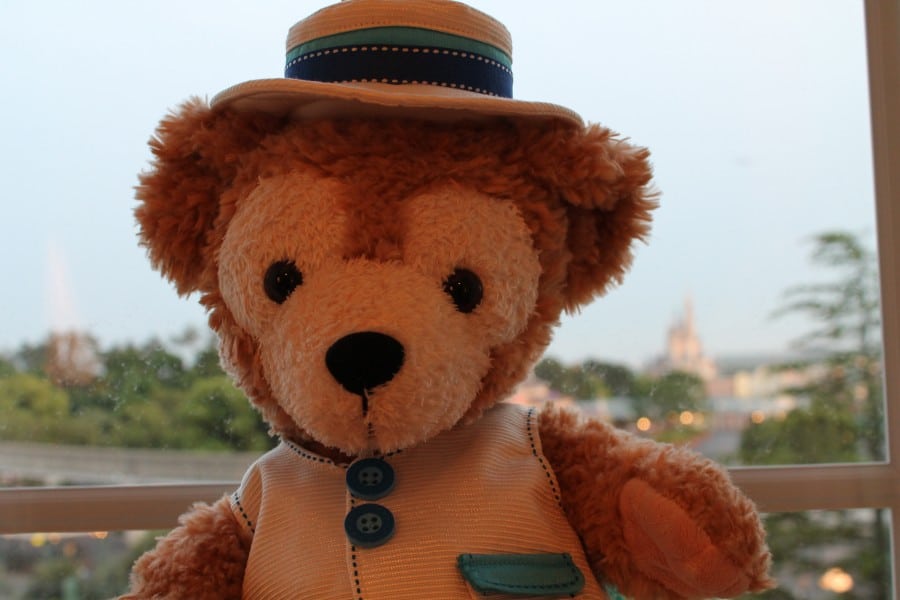 Duffy hangs out in our castle-view sitting room at Tokyo Disneyland Hotel.

It was hard to leave the room after arriving so we could go and have dinner.  Somehow, we managed to pry ourselves away for a couple of hours to do just that at the delicious Sherwood Garden Buffet – one of two full-service restaurants in the hotel.

After a walk around Iksipari, we returned for drinks at the Dreamer’s Lounge.  This large space features oversized seating and a fantastic drink menu.  We each ordered one of the lounge’s signature cocktails and relaxed before retiring for the night. 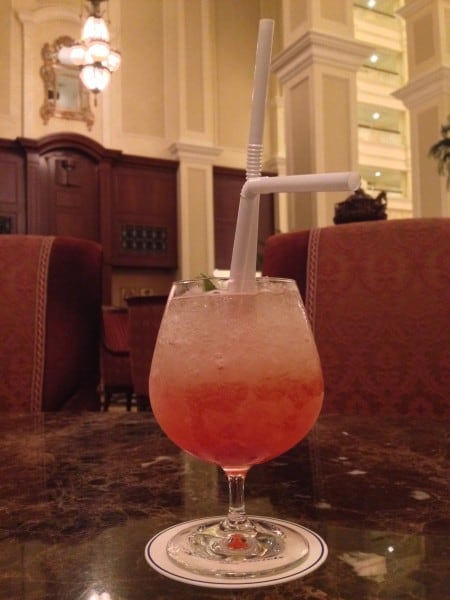 Not long after heading to bed, we noticed lights flashing from the window in the sitting area.  That’s when we realized that after the park had closed, the crews were doing a run-through of the new nighttime show “Once Upon a Time.”  It was fun to watch from our living room window to get a sneak peek at what the show was going to look like.  But alas, we were tired, and so it was off to bed for a good night’s sleep before hitting the park in the morning. 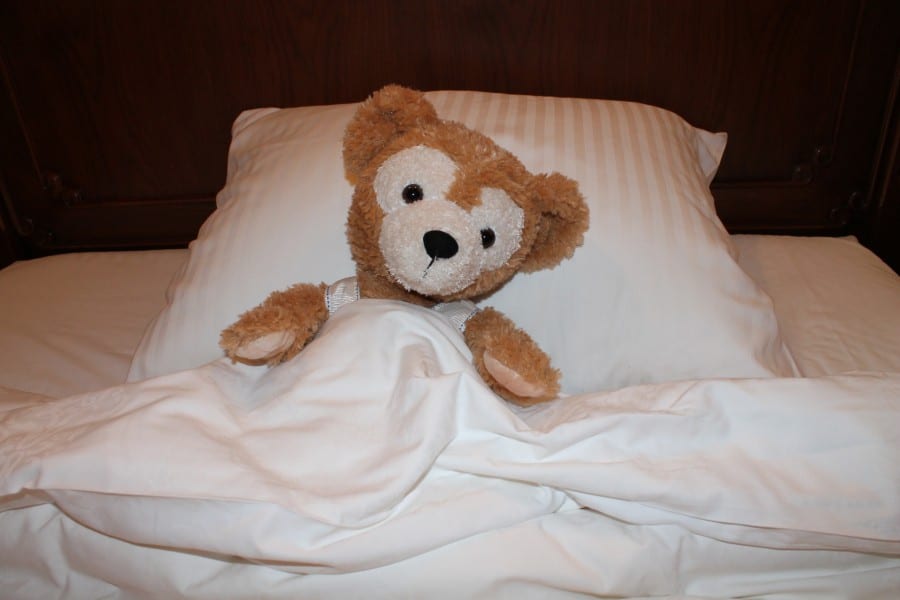 The next day, we were able to take advantage of early entry in to Tokyo Disneyland.  Guests at Tokyo Disney Resort hotels get a 15 minute jumpstart on everyone else getting in to the parks.  While this doesn’t get you early access to FastPasses, you do get a chance to get on some of the more popular rides before everyone else, and you can queue for FastPasses for when they become available.

Checkout time was at noon, and so we headed back to the hotel after a morning of enjoying the park to take our belongings from the room and to leave them with bell services.  I was sad to leave the “lap of luxury,” but glad I had a chance to stay the night.

Overall, Tokyo Disneyland Hotel is a pricy experience compared to other nearby hotels in the Tokyo Disney Resort area which are operated by Hilton and Sheraton.  However, if being price conscious is a concern, chances are you wouldn’t have made it all the way to the end of this piece.

If you’re looking for a splurge in your travels to Disney themed parks in the future, and you have the desire to stay at a “Disneyland Hotel,” I highly encourage it.  Even if it’s for one night – just to say you’ve done it!  As a fan of Disney, you will appreciate the detail that has gone in to every piece of the experience.