I’m not going to go into great detail about some of the attractions since they are explained in my previous Trip Report to DisneySea. If you need to catch up please read it here.

June 15th 2010 was our 2nd day in Tokyo DisneySea, it wasn’t as busy as the Saturday but it was still pretty packed. It was a nice sunny day without a cloud in the sky! What a difference compared to Disneyland the day before. 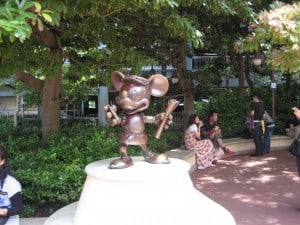 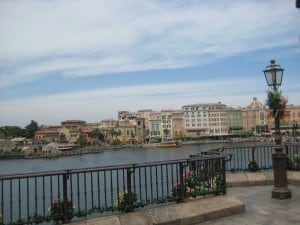 Seeing as it wasn’t extremely busy we took out time to walk around the park and decide on what attractions we wanted to go on. We finally decided on grabbing fast passes for Indiana Jones since it had the longest wait time we could see. We then toured around the park looking at all the various theme parks. It’s quite the site to see something so unique to Tokyo. 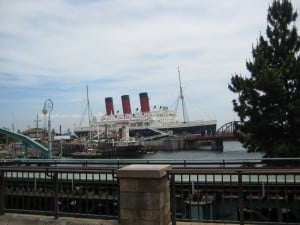 Loverly photo of the the American Waterfront 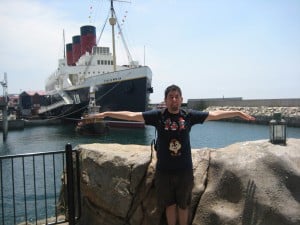 I remember the Saturday I was in DisneySea and we had to line up to get basically a Fast Pass to go into the official Duffy Store because it was so busy. I was unsure if we still had to do the same thing on a week day. Luckily we did not have to. It was still wall to wall people inside the Duffy store. I absolutely love how enthusiastic the Japanese get over almost anything. If you are living and breathing in Japan there is a really good chance you have a Duffy Bear especially if you’re in the park. You would never see that back in North America. I saw people grabbing Duffy outfits like they were no tomorrow and a Cast Member standing there restocking the shelves as fast as they were being taken. I was debating on purchasing the big stuffed Duffy Bear that was about $45 Canadian. Finally I decided on getting the small keychain sized one. Extremely adorable and possibly the best purchase I made in Tokyo Disneyland!

After that we wanted to catch the Fairies Primavera show around noon, so we strategically planned our next attraction. We waited in line for 20,000 Leagues Under The Sea, which was in Mysterious Island. After that we wanted to have lunch at the restaurant where Duffy was. There weren’t very clear signs indicated (that I could see anyway) that there were two lines for the restaurant. One was for the Character Lunch with Duffy and the other line was for those that just wanted to eat. After waiting in line for about 20 mins we finally caught on and asked a lovely cast member before we left the line. As much as I love Duffy I didn’t want to wait for an hour to eat lunch with him.

We missed the starting of Fairies Primavera so we caught the end of it where we couldn’t see anything. Thankfully there was another show happening later in the day. We then headed “Under The Sea” and went to the Little Mermaid Live Show. It was a lot shorter than I thought it was going to be but regardless it was still a great show. The stage is right in the middle and everyone sits around it and there’s a lot of “floating” characters in the show. 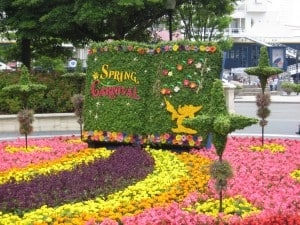 Flowers in the American Waterfront 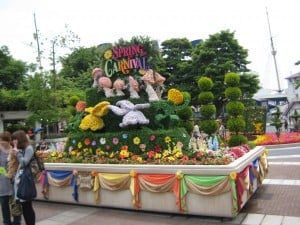 Flowers in the American Waterfront

We then used our fast passes and headed on over to Indiana Jones. One the way there we saw some of Tinkerbell’s friends. There was a huge crowd to get their photos taken with them. I snapped a couple of shots of them.

After that we headed all the way back to the American Waterfront to stand in line for The Tower of Terror. On the way there we took photos of the flower arrangements they had set up in the courtyard in front of The Tower of Terror. We also caught a glimpse of not so common Disney characters. 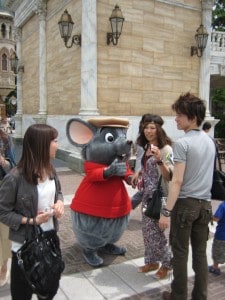 I can\’t remember who this Character is….very familiar.

Waiting in line for Tower of Terror wasn’t too bad, we waited about an hour. The story behind the ride is completely different than the one Walt Disney World. Just like the Tower of Terror in Florida I screamed by lungs out on this one. I really do not like the falling feeling at all. I think the photo of us on the ride explains it all. 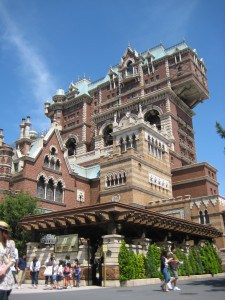 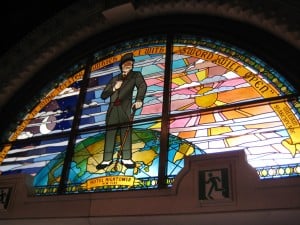 Inside the Tower of Terror 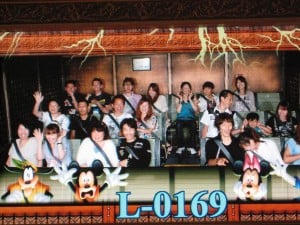 I was freaked out on the Tower of Terror. Top left corner. 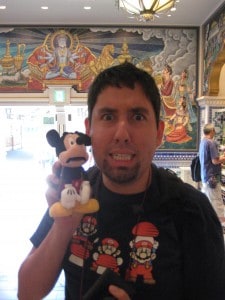 To calm my nerves we went and went on an attraction in Port Discovery. It was relaxing and quite fun. Each cart does a different path so each time you go on the ride it’s a different ride each time. The wait wasn’t that long, maybe 20mins at the most. After we ran into a familiar face… 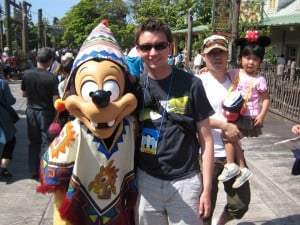 My friend Don with Max! 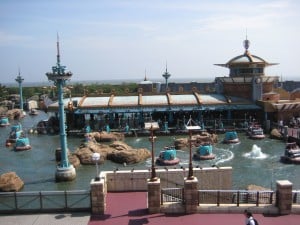 Port Discovery – The attraction we went on.

After that we walked to the Arabian Coast to take some photos, since there wasn’t much to do in there. Then we headed back down into Ariel’s Groto. Then it was about 40mins before the next showing of Fairies Primavera. We wanted to grab a good spot so we got a nice spot near the hotel in the Harbor. 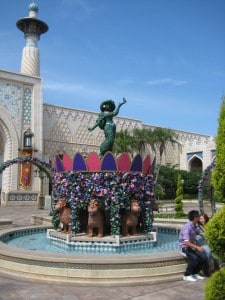 Jasmine in the Arabian Coast 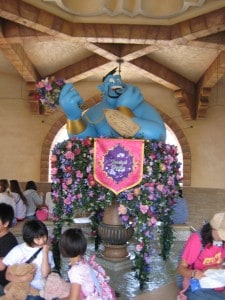 Genie in the Arabian Coast 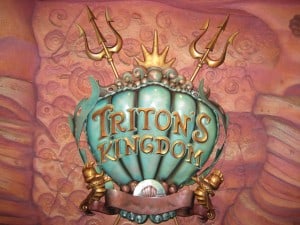 This thing was huge! 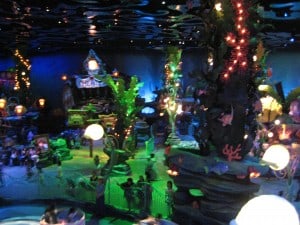 Before the show started there were cast members setting up little props all over the the harbor. Instead of me explaining the entire show I can let this full video that I took. It was an altered version because of the wind.

>
During the performance I had Chip jump onto the rail and poke my chest really hard because I was wearing a passport holder with Chip on it. He then gave me a thumbs up after he did so. It’s not shown in the video since when he pokes me the camera points in an odd direction. Also Pluto jumped onto the rails to hug this girl beside me, you can catch a little bit of it in the video but he was so close that you can’t really see it. 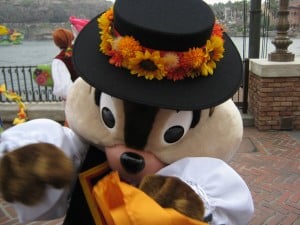 Chip attacking me because I was wearing his passport holder. 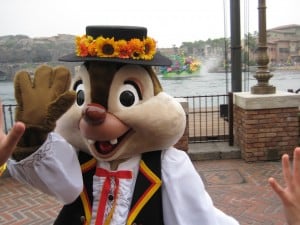 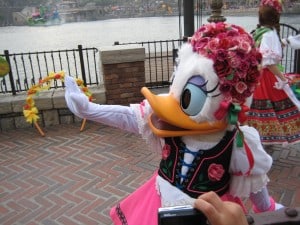 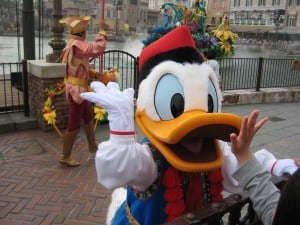 After the show we came to the decision that we wanted to extend our passports to a three day so we can head back to Disneyland the next day. We weren’t ready to be finished with Disney. Also we said when are we ever going to have another chance to come here again. One thing we did find is that Guest Services is actually called “Guest Relations”. I’m not sure if it’s the same in all Disney parks around the world but it caused some confusion when I asked a cast member where the Guest Services was in Japanese.

Once we got out passes extended for another day (which was about $25) we headed back to Ariel’s Groto to have supper. I found it rather ironic that their main dish at the quick service restaurant was fish. Before eating I said “I’m sorry Flounder!”. I’m sure not many people around me understood what I said (at least I hope).

After a delicious fishy supper we thought it would be fun to head back to the Indiana Jones Attraction again, this time we got a nice photo of our action shot on the ride.

Then we headed to Raging Spirits. I find it interesting that rides in Japan are toned down a little bit. It’s a neat cultural difference. There was a poor kid puking his guts out after he got off the ride. If you can handle Expedition Everest in Animal Kingdom in Walt Disney World then this coaster is a walk in the park, even if it goes upside down. It’s still a fun ride none the less. Even those that do not enjoy fast coasters will find it enjoyable.

Once we were done with the attraction it did start to rain. Luckily we had out rain coats and umbrella’s from the day before. The one downside to visiting Japan in June is the rain. But it was nice to cool down after a long hot day. We snapped a few photos at night which turned out pretty good I thought.

Then it was time for the night time show BraviSEAmo! I was happy to see the show once again since it’s going to be replaced with Fantasmic! in the near future. This time I was able to get a full video of the performance!

Once the show was finished we walked around the Park a couple more times to just to look at everything one last time before we left. It was still raining and we stayed in the park until closing time. We did some shopping which was much more enjoyable than the Saturday which was insanely busy. Picked up some nice gifts for people and got my mom a nice Minnie Doll dressed in nice colourful easter colours.

DisneySea is quite the experience, it’s nothing you will see in any other Parks in the world. It’s supposedly more popular with the young adults than Disneyland since the rides are aimed at the older crowd. One of the girls that worked at our hostel said she’s been to DisneySea about fives times and hasn’t been to Disneyland once. Which I found to be pretty interesting. Either way if you are ever in Tokyo and want a break then make sure to check out DisneySea! It’s an amazing and unique experience! Any Disney fan would be absolutely Bonkers! (see what I did there?) if you didn’t go.

If you want to see more photos from today please head over to my Facebook Album to check them all out!

Tomorrow is our final day in Tokyo Disneyland. Where we head back to Disneyland Park and actually get to see the Electrical Parade and the Easter Celebration Parade in full!