Today I finally get to go to Tokyo Disney! A good friend of mine invited me to come along with her and her boyfriend for the day. It just happened to be on the busiest day of the week. I figured it couldn’t be *that* busy. Boy was I wrong! We got there shortly after the park opened and the lineups to get into the park were at least 200 people deep for each line. It was just a sea of people. Luckily my friend stood in the line up while I went and bought my passport with her boyfriend. Without me knowing he told the Cast Member it was all of our birthdays, so we each got a Happy Birthday sticker to put on our shirts! My birthday was on the 3rd, hers on the 7th, and his on the 16th! We got a lot of “HAPPY BIRTHDAY” from Cast Members all day and a lot of them were surprised to see that three of us were all celebrating a birthday together. 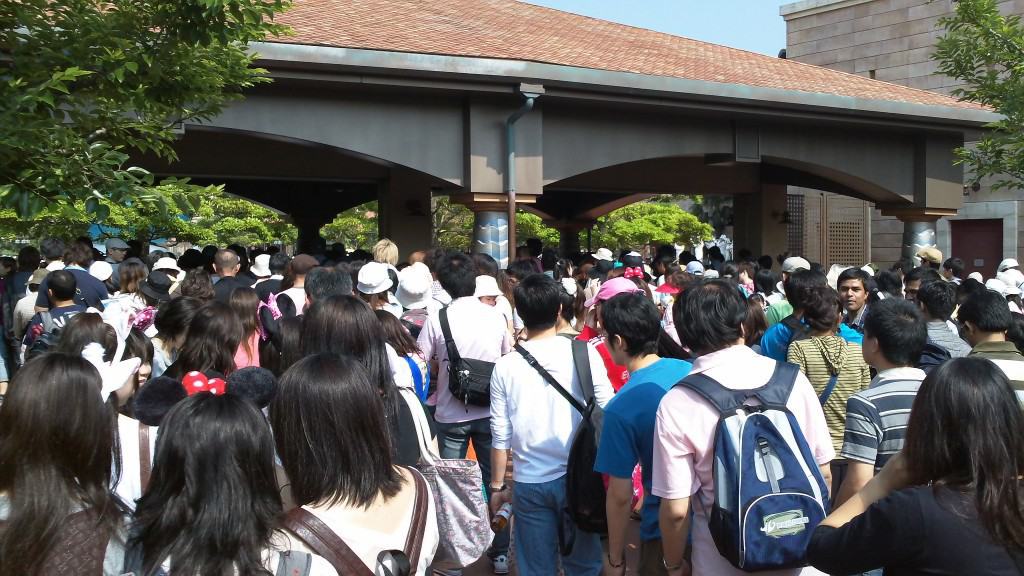 Huge line up to get into the park! 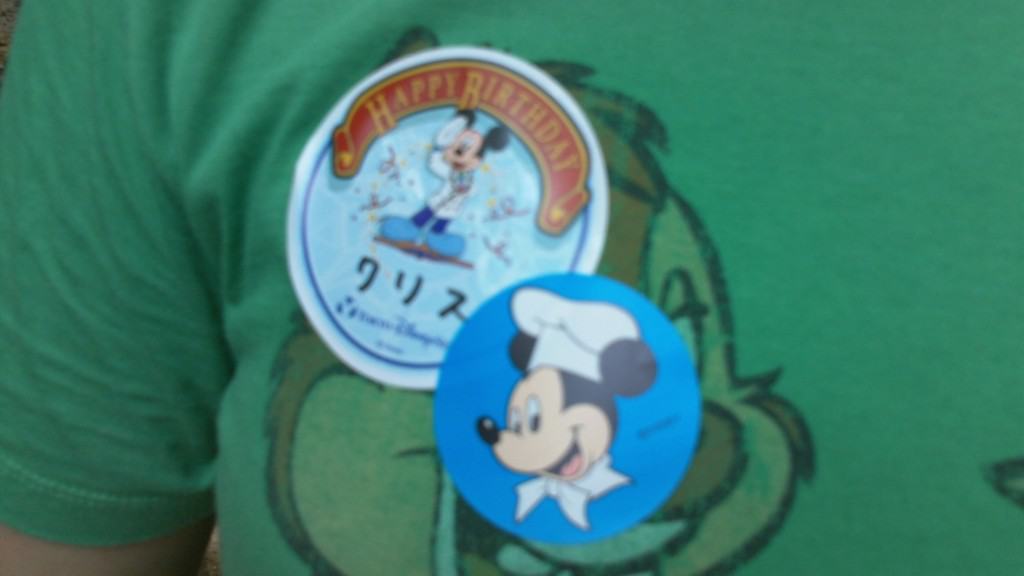 Happy Birthday to me!

The train that we had to take to DisneySea was a Disney Train and it had Mickey for the rings to hold onto. Even the windows were shaped like Mickey. Meanwhile, various Disney songs were playing in the background. 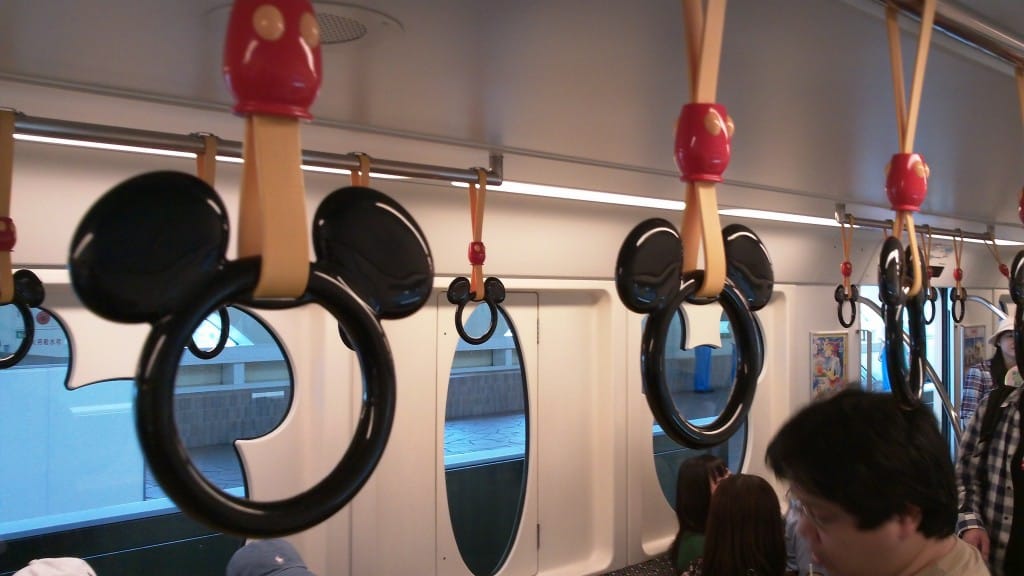 Why am I not surprised? But it’s awesome none the less!

Our first stop was at Mysterious Island which inside part of the big volcano in the middle of the park. Inside there were 20,000 Leagues Under The Sea and Journey to the Centre of the Earth. Sadly Journey was closed for re-imaging. Once we walked through we passed Mermaid Lagoon where all the smaller children rides were inside. Then we finally got to the other end of the park to pick up our fast passes for Indiana Jones and soon after Raging Spirits. Once we got those we headed on over to Port Discovery and waited for an hour to get onto Storm Rider! It’s a simulator that takes you into a storm and you have to do some research about the storm. It was pretty fun and I enjoyed it a lot! 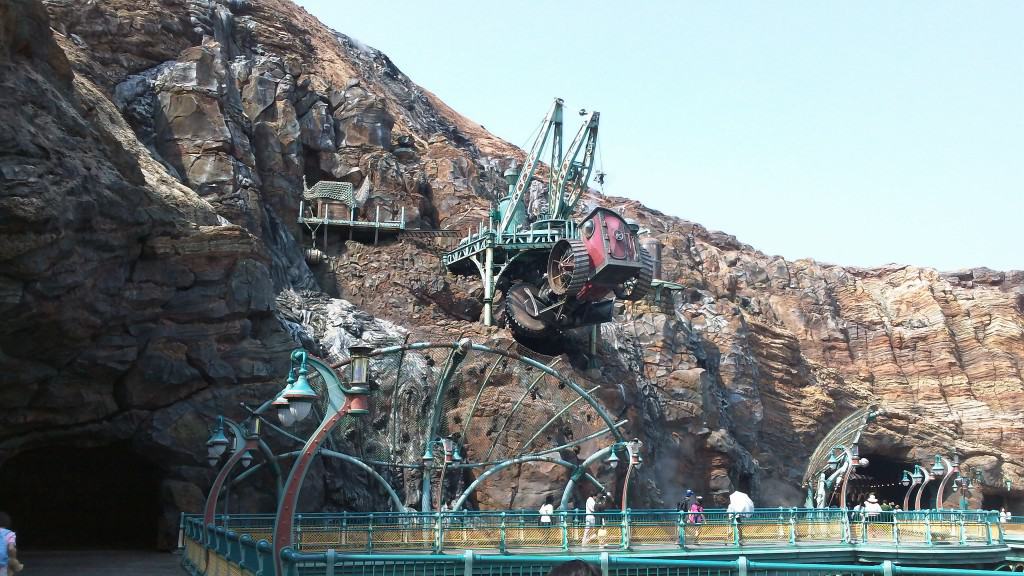 Such attention to detail on Mysterious Island. 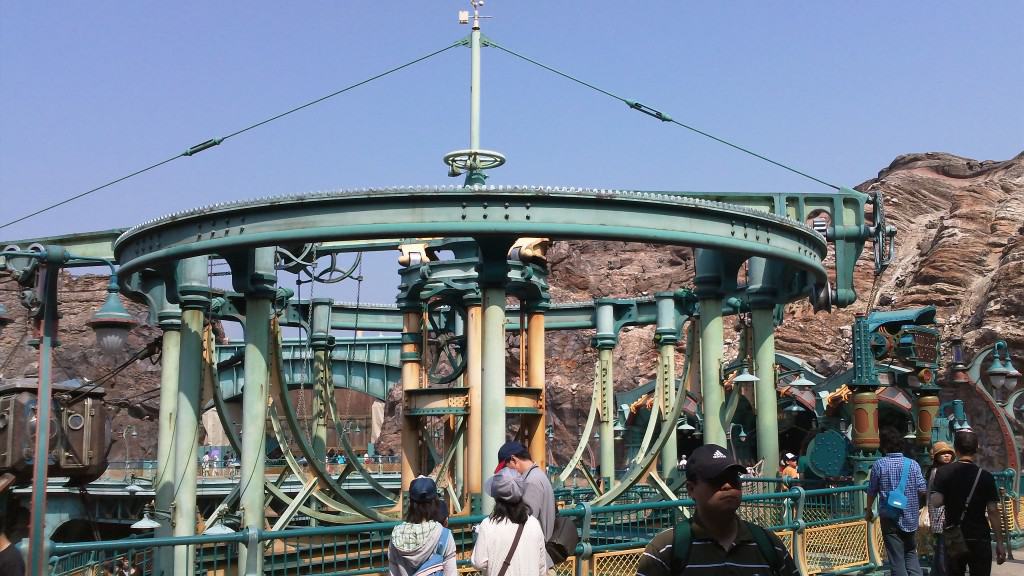 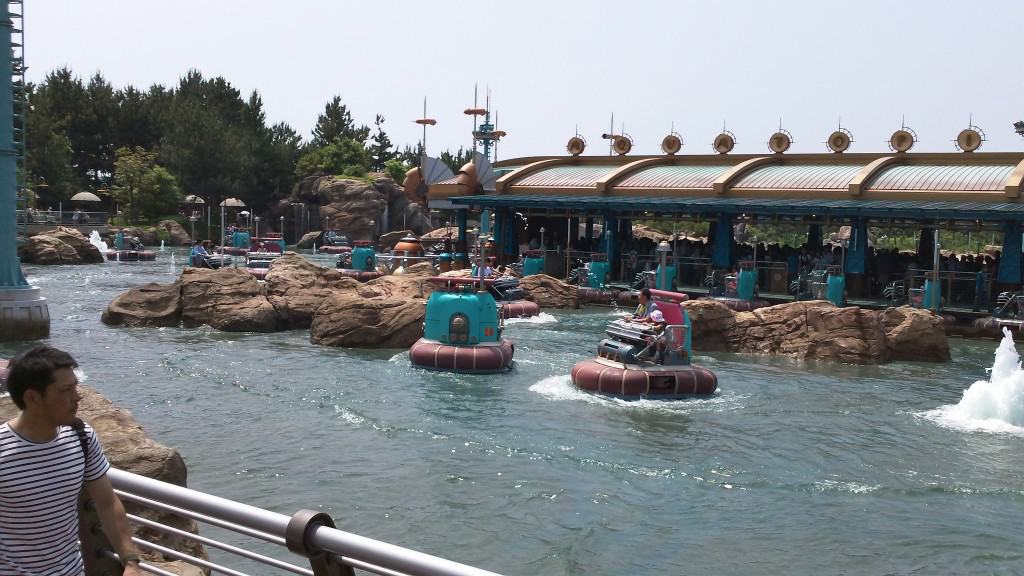 I love these creative rides they come up with!

Once we were finished with that our fast passes for the other attractions were up yet so we headed on over to the American Waterfront. We stood in this line that I had no idea what it was for. I asked my friend in Japanese what it was for and she said we had to get a ticket to be able to go into the Duffy store to buy anything. It was *that* busy that we needed tickets to get into the store. I must say this Duffy Bear is the cutest bear on the face of the planet! 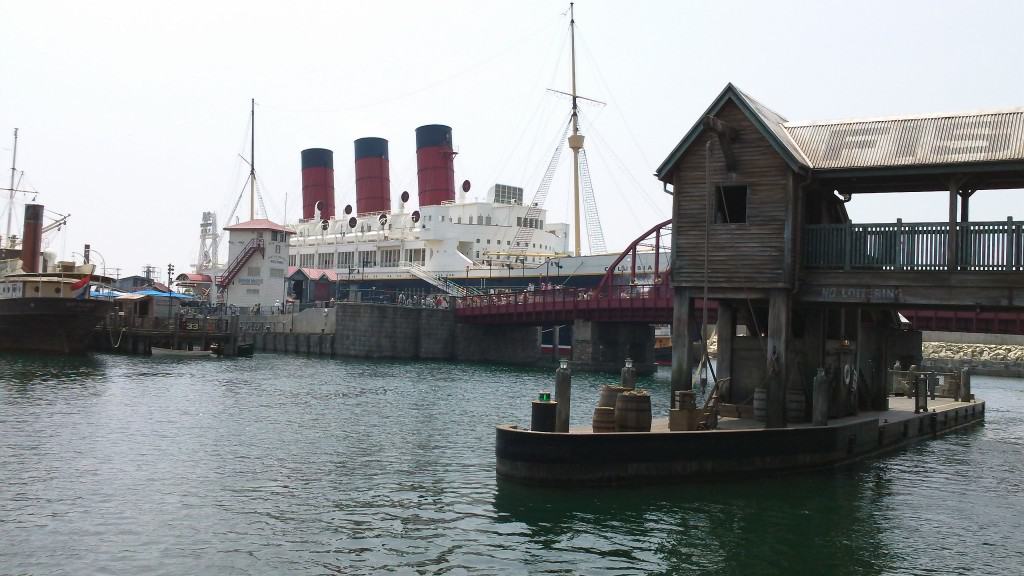 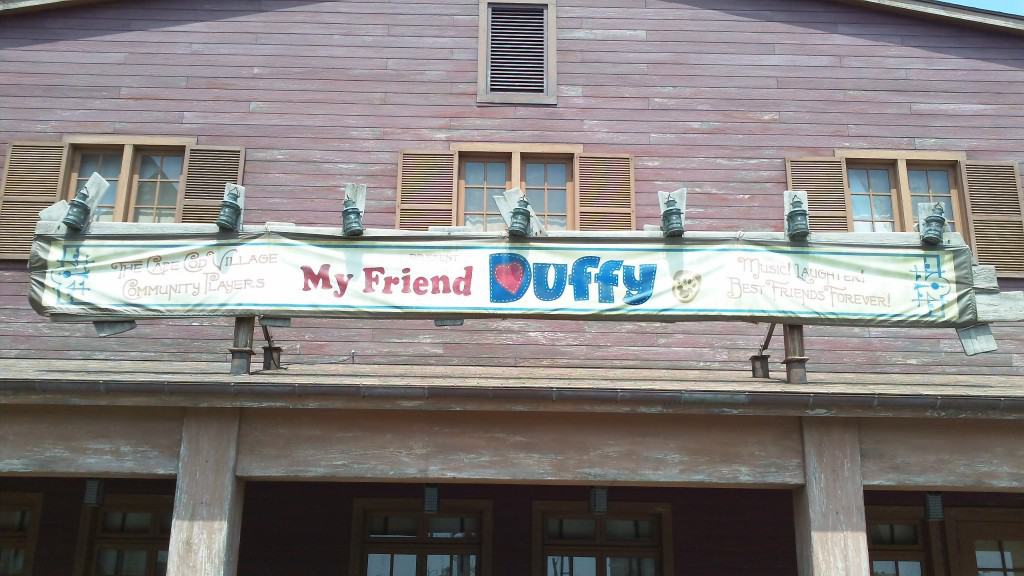 Duffy the Disney Bear. The most popular bear in Japan.

Walking around the park I saw various spots where you can set your Duffy bear and take photos of him with a beautiful scenery. I sat and watched countless people take photos of their Duffy bears. I love how the Japanese really get into things no matter what age you are. I would say about 1 in every 3 people in the park that day had something with Duffy on it. My two friends both had Duffy bears, one was Duffy and the other was his girlfriend ShellyMae. The “hip” thing to do was have it stick out of your backpack or bag while you walked around if you were 20 something. I got a smaller Duffy bear and put him on my backpack. Now I felt like I fit in with everyone else! 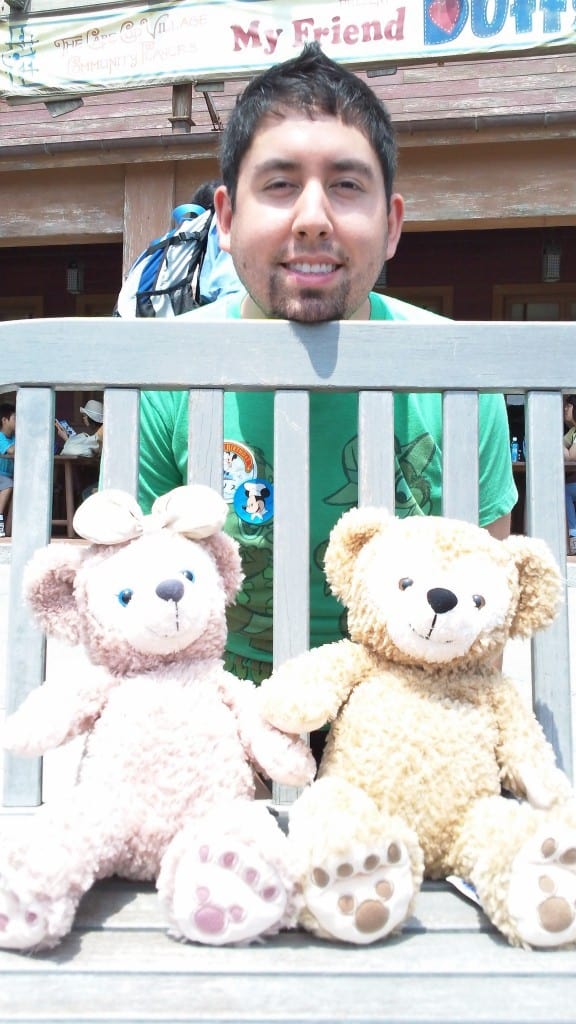 My two best friends and I

After becoming part of Japanese Pop Culture we finally headed to our Indian Jones ride! But first we had some Italian Ice, I got me some of that sweet sweet Strawberry flavor! Anything with ice tastes so damned good when it’s +30 and HUMID! When we were in the fast pass line for Indiana Jones I came across something hidden in the walls, it looked rather familiar so I decided to take a photo and you can judge for yourself. 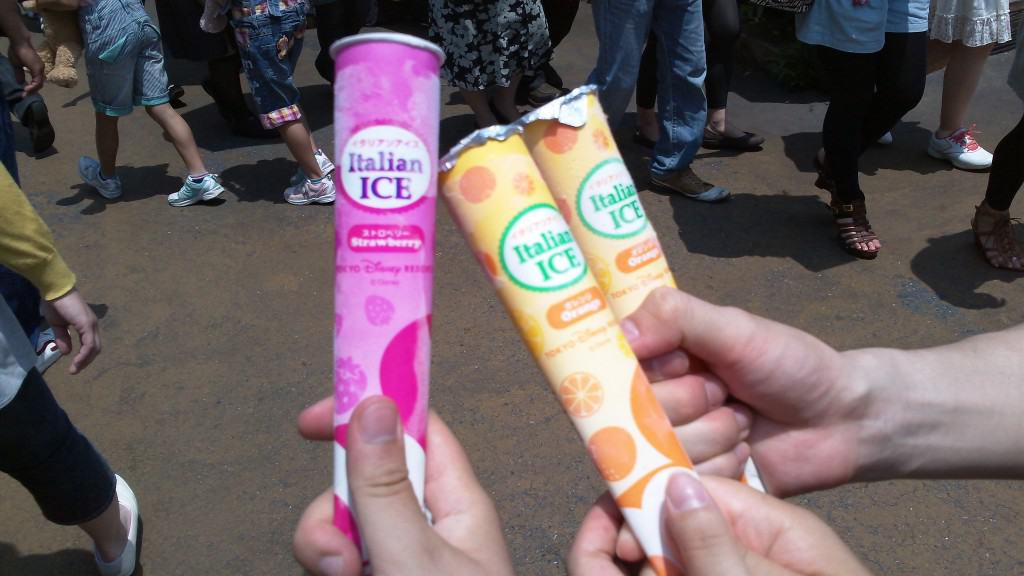 With our powers combined! 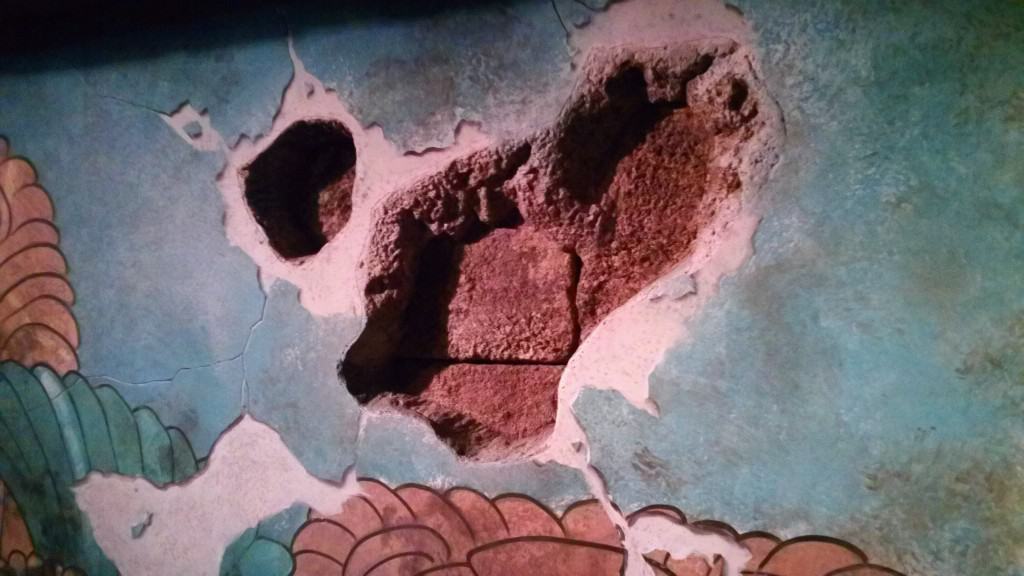 This hidden Mickey is easily seen while waiting in line at the Indian Jones attraction.

The photo after the Indiana Jones was pretty good too. I cheated the system and just took a photo of it the picture. 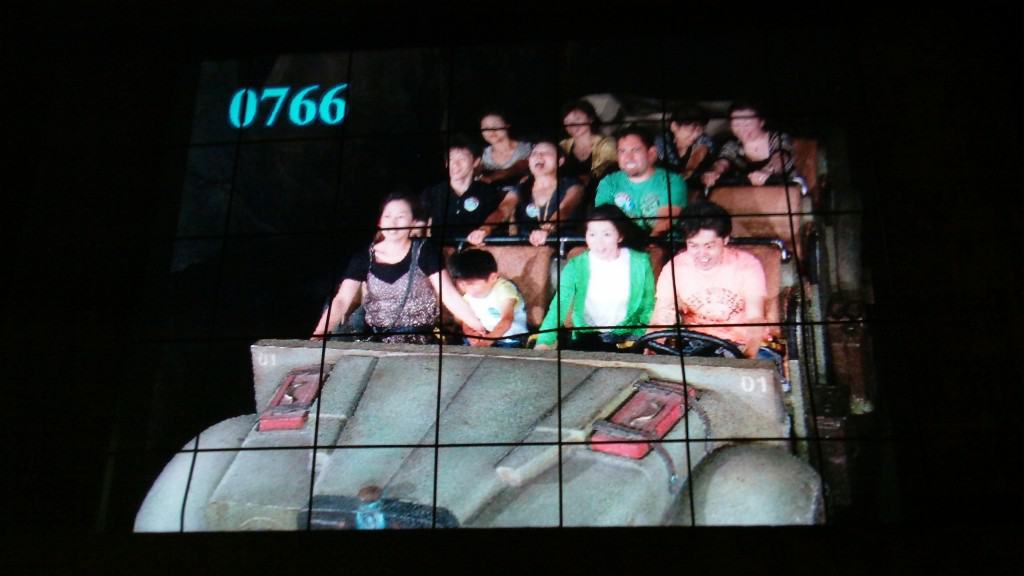 Next, we checked out the Arabian section where they have the Jasmine carpet attraction, but sadly it was closed along with the Magic Lamp Theatre. There wasn’t much else to do there but go on the carousel. Did manage to get some really nice photos though. 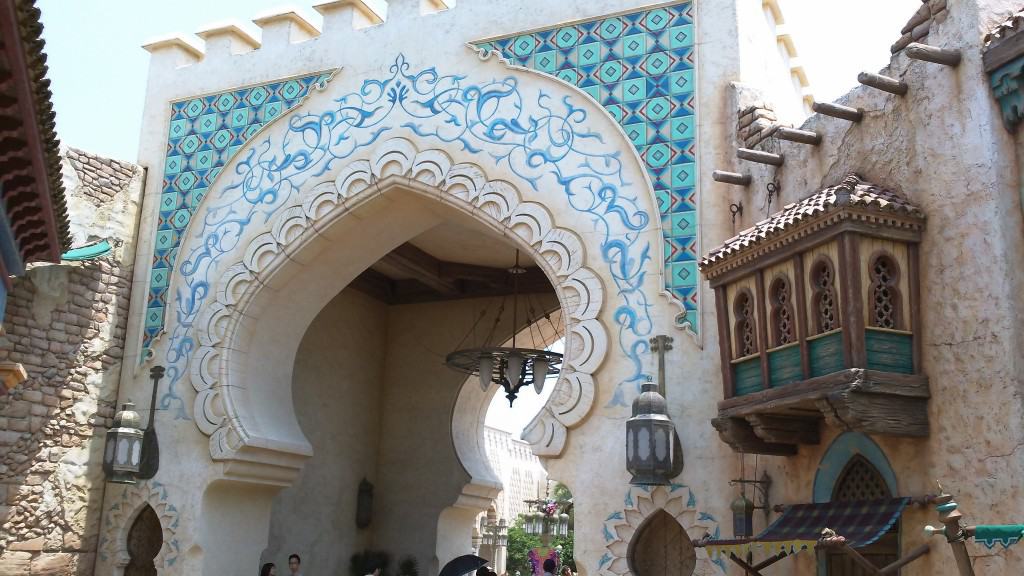 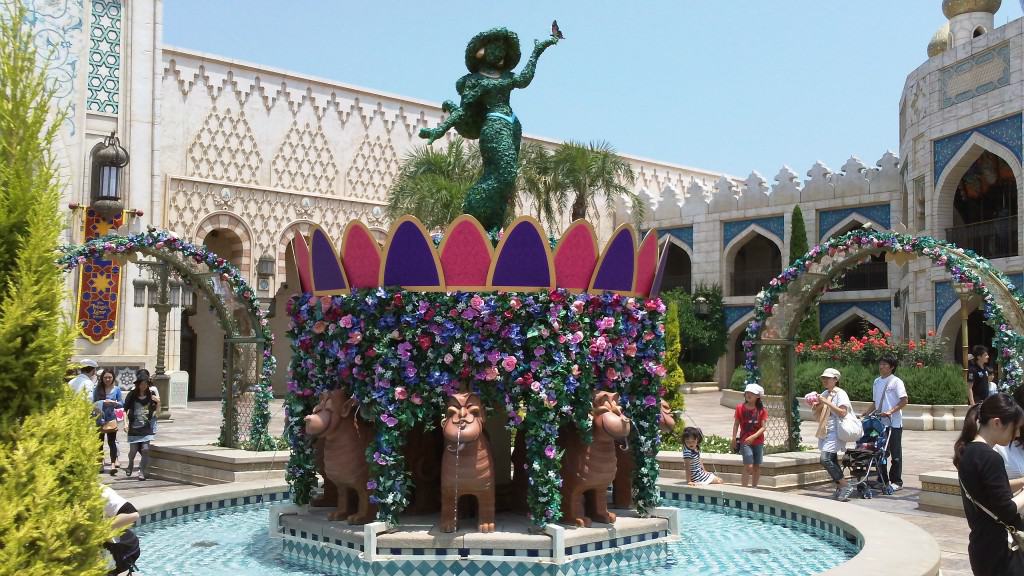 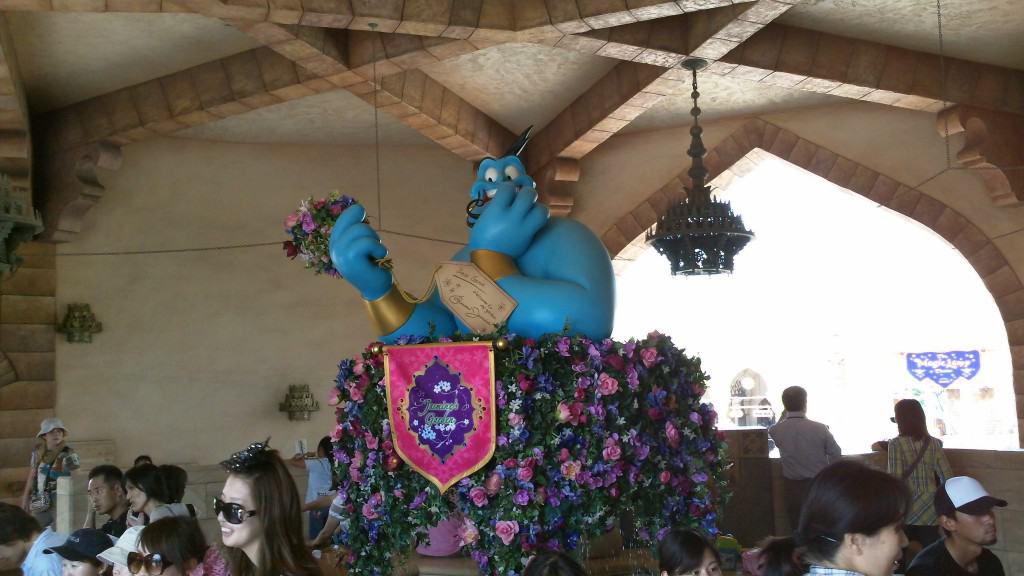 Then we headed back to Mermaid Lagoon and we saw a very familiar character outside with his best friend. 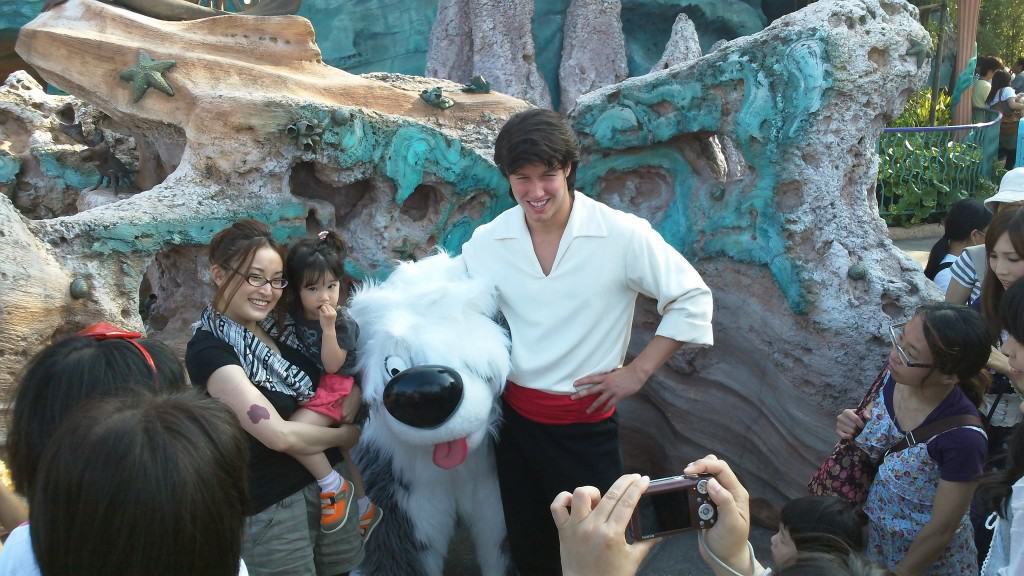 It was hard to get a photo without getting trampled by people.

While inside Mermaid Lagoon we went into this gift shop that had a whales mouth for the entrance, the roof as his rib cage and the floor in the front was pink and squishy like his tongue. 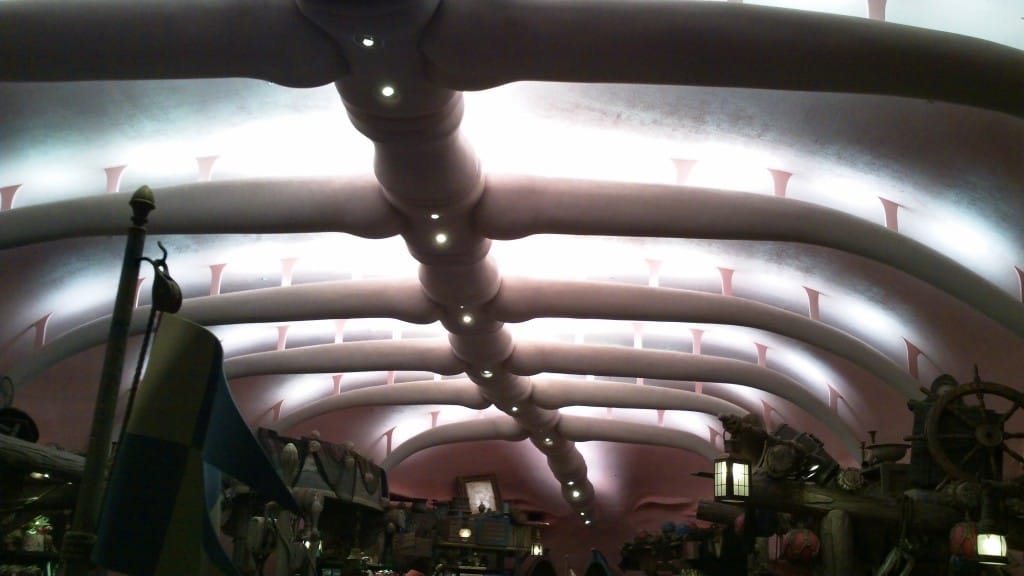 After a few moments in the store I ended up with something very odd on the top of my head, I think it was rather stylish, don’t you? 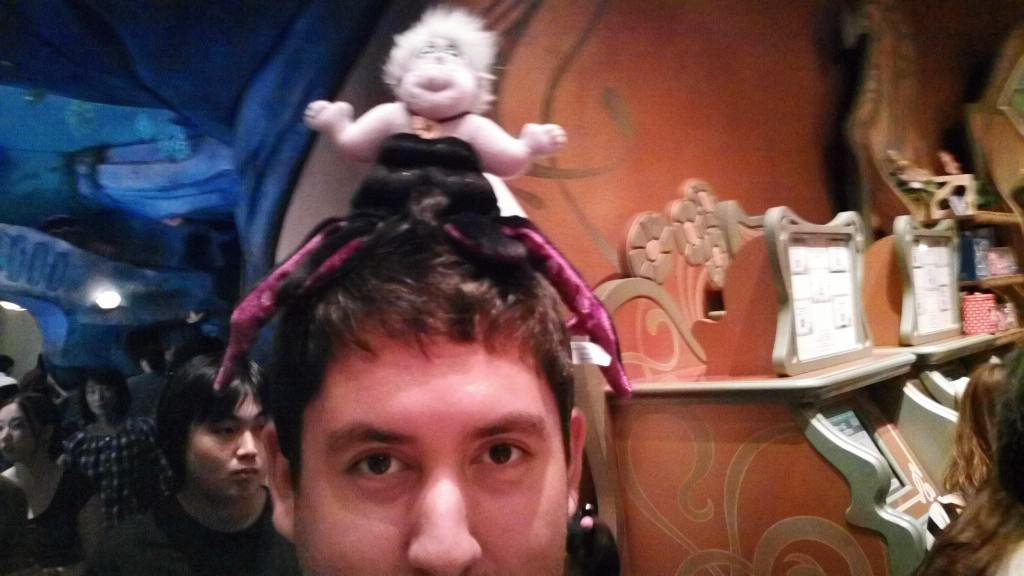 I should have bought it…

As part of the Spring Festival DisneySea, there is a fairy theme within the park. We happened to pass a group of Fairies doing greetings outside of Port Discovery. They even have a boy fairy to ensure they include everyone. Also similar to Epcot’s Flower Festival they had various Disney Characters in flower form throughout the park. 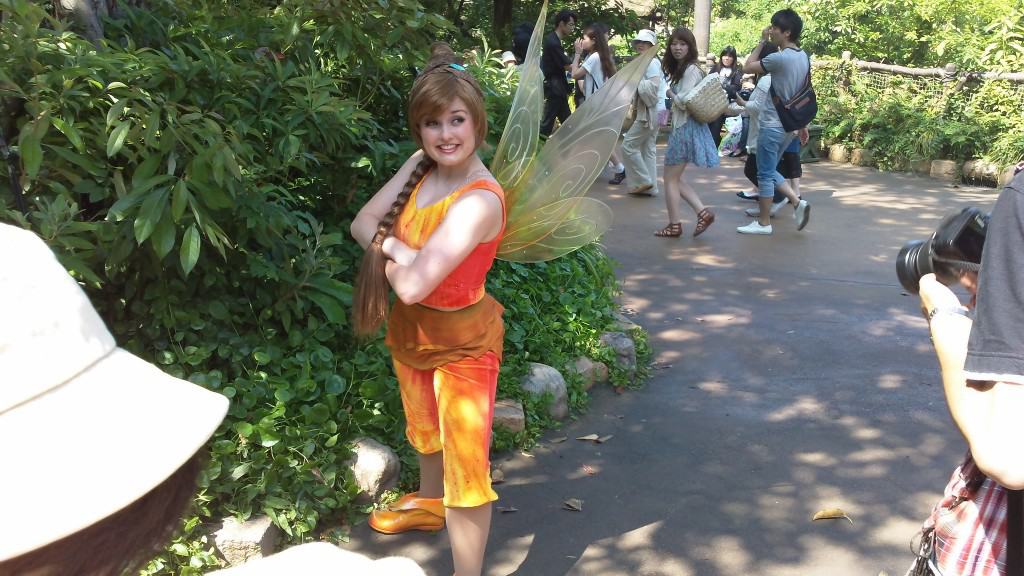 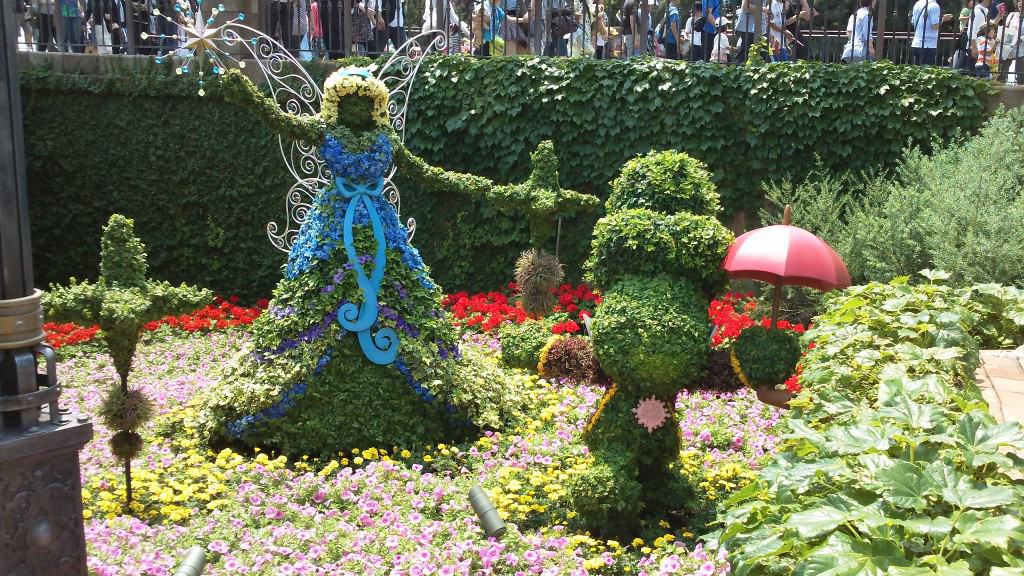 For lunch, we ate in New York, and I got myself a nice Turkey Sandwich and fries. It was a nice break from traditional Japanese food (which I really do love). It was reasonably priced. I paid about $12 for a full meal which is what you would expect in a Theme Park. 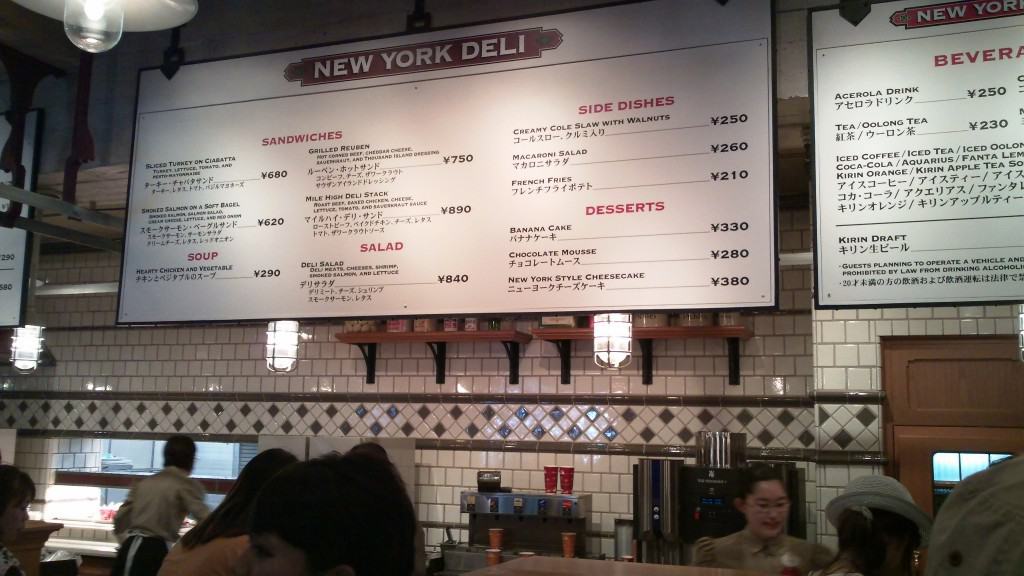 We ate in New York! Prices weren’t too bad.

Sadly with all the running around and waiting in line for attractions, we missed a lot of the performances that happened throughout the day. But we did get to see an altered version of BraviSEAmo! It was altered because of the high winds that night. The fireworks were canceled though, which really did suck. Did get to catch the tail end of a performance. Here’s a short video of it.

Overall the day was so much fun! I got to spend it with a friend that I haven’t seen in 7 years and she got to share my first Tokyo DisneySea experience with me! She was very happy to show me around and watch me as my face lit up with a smile each time I saw something magical happen. The lines were long, the crowds were thick, and it was hot and humid, but I loved it! There are three more days of Tokyo Disneyland so there are tons of photos and videos to come! 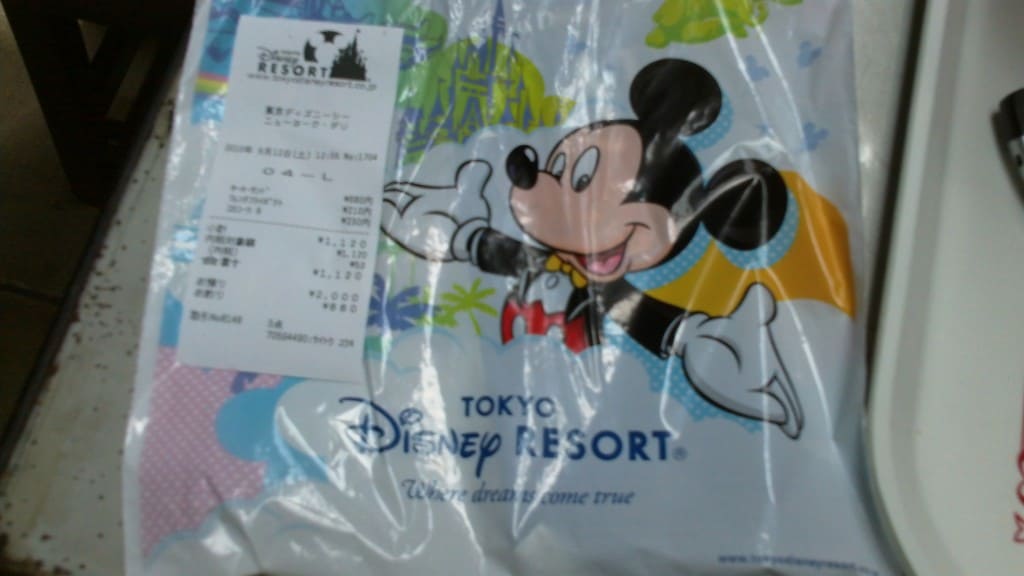 Not all my photos are posted in this post. I have them shared on a public folder on Facebook for you to view.