Today was our first full day in Tokyo. The day before we were pretty tired from our 10.5 hour flight and when we FINALLY reached our Hostel in Minamisenju (南千住) we were tired and were fast asleep by 8pm.

I woke up at 4am and could not get back to sleep for the life of me. After about 3 hours of just browsing the internet on my iPhone I decided it was time to get up and have a shower. It costs 100 yen per 5 mins for a shower. I just dubbed it the “pay-as-you-go” shower.

We were ready and out the door by about 8am. We attempted to eat at our Hostel’s restaurant that is across the street but they were closed. There were different opening times posted in three different areas. Apparently it’s not opening until July. Anyway we just headed to McDonald’s for breakfast since that was one of the very few things open.

Took a train all the way to Shibuya (渋谷) and began to check it out. After leaving one small store this guy, who spoke English, came up to me and asked me to visit his store. Being polite I said I would. It was upstairs and he was selling hip-hop type clothing. Which isn’t my style at all. He kept telling me he would give me a discount if I bought clothes. I said I would try on a pair of shorts that were a size 34. The guy looks at me and says “no you’re a 36” and told me to try them on. I went downstairs to try them on. He kept pressuring me to buy clothes and told me not to worry about the price. He went upstairs while I was “putting on” the shorts. Don told me he was gone upstairs. I put the shorts on the counter and got out of there as fast as I could. That was extremely awkward…

I knew that Lady Gaga was huge in Japan but not 5 stories huge. There’s a billboard of her on the side of one of the buildings and it’s awesome. 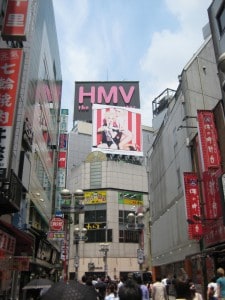 Lady Gaga is HUGE in Japan.

Checked out some of the shopping they had for men. It’s quite the experience. The clothes are WAY out of my price range. But if I did have the money I would spend it on the awesome clothes you can find here. Mickey mouse is everywhere…. 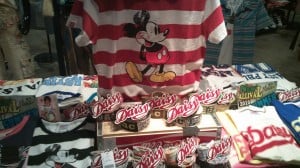 I really do wish that shopping back home in Canada was this awesome. I’d probably end up buying more clothes than I should. But if there’s a good groove going on….I’d probably buy anything!

Headed on over to the Apple Store just to check it out. It’s the same as all the other Apple Stores but this was a Japanese store so it’s that much cooler! *smirk* 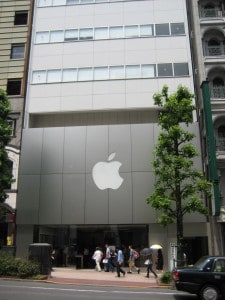 Then we decided to check out the arcade. When we walked into the entrance we were greeted by this very scary looking toy that was moving around on the floor with a ballon in it’s hand….

After all the excitement we decided that it was time to head to Shinjuku (新宿) to check out some of the sights there. This is what we had to walk through to get to the Shibuya Station (渋谷駅).

After getting to Shinjuku and walking around we headed back to our Hostel in Minamisenju. There is still time left in the day so we are going to head back out after getting some much needed rest. Who knows what tomorrow is going to bring!