May 10th – Today was the day we headed off resort and venture into Universal Studios. The morning started off pretty rough. We figured that we could take the Linx bus from Downtown Disney and make it to Universal just before they opened. We left a bit too early and there was no active bus to Downtown Disney. Ended up missing the first bus. So then we took the bus to Epcot then took the monorail to the Ticket Centre to take the bus from there. Once we got there the Linx bus showed up but the bus driver told us not to take this specific bus and that another one with the exact same number would be coming shortly. After 30-45 minutes of waiting there was no bus. By this time we’ve already lost over 2 hours to get off resort. We finally just said screw it and went to the Polynesian Resort and took a taxi. We were going to take the Mears transportation from the resort but the lovely woman there told us that it would cost just as much as a taxi and take twice as long since they stop at other resorts before finally going to Universal.

The taxi ride cost us $35 US. Which was cheaper than paying $18 per person by Mears. So for those of you that want to know how to get to Universal from the resorts. Your best bet is probably taking a cab. Less of headache. 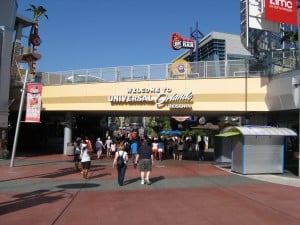 Finally made it to Universal!

After trying for 3 hours to get to Universal we FINALLY get there just after 9:30am. The first part we headed to was Adventure Island. A lot of the shops and stuff weren’t open yet so it felt sorta like a ghost town, granted there were still quite a few people there. Our first ride was The Incredible Hulk. That was a pretty intense roller coaster. Tons of twists and turns. I still had fun none the less. Once we got our blood pumping we did the Spiderman ride. You are put into a small cart and are taken through the story of Spiderman. At one point they make it feel like you are falling when it’s just the screen in front of you moving. I got a little motion sick off of that one.

A lot of the other rides weren’t open yet so we just walked through the park. We checked out the Dudley Do-Right water ride. Which is a rip off of Splash Mountain just a little more wet. We were the only two people on the ride and I got completely soaking wet. When we hit the final drop I took all the water in the face and John behind me was dry as a bone. To take out my anger on getting wet I paid $0.25 to shoot water on riders that passed by on the ride under a bridge. I made sure to get the ones that were dry. I love karma. 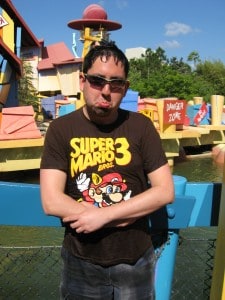 This is my not impressed look.

Since I was soaking wet we went over to the Jurassic Park attraction. Again I got water all over me. I was already soaking wet so it didn’t really do much. We then headed around and took pictures of what we could see of The Wizarding World of Harry Potter. Got some nice photos of Hogwarts. I was praying for a soft launch but I knew it wouldn’t happen. There’s always next time. 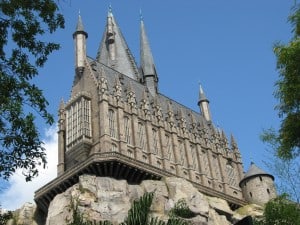 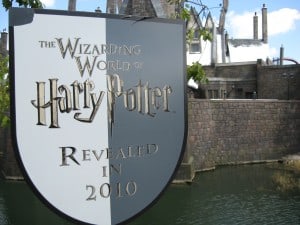 Wish it was open!!

After that we did some Dr. Seuss rides and stopped for some lunch. The food wasn’t overly great and it was pretty expensive. Not very many choices in an amusement park. Once we were done with our lunch we walked around the park a little bit then we headed on over the other park. This is where we actually used out Express Passes to jump the lines that were starting to get a bit long.

First checked out the Jimmy Neutron attraction. Which was not any fun at all. The guy working the attraction thought it was awesome to put us in the front row which was Stationary Seating. I guess it was fun watching everyone else have fun. We weren’t very impressed with that. Next up was Shrek 4D which was pretty amusing. We also checked out Twister and the Great Disaster. The latter was hosted by the hologram of Christopher Walken. Add him to anything and it’ll make it awesome. At the start they take random people from the crowd and they become part of the stage production. They make them do some funky things in front of a green screen then we all head into a Subway and we act we are extras in the movie. Then the subway starts to flood because of an earthquake. There’s water, fire, and things falling all around you. It was pretty neat. After they show us the trailer for the movie with clips that the random people recorded earlier. My favorite was the old grandma blowing up while she was in the garden.

My other favorite ride was the Simpsons. You were in Krustyland and you were put in a kart that went in front of a huge screen and you zipped around. It was so much fun but got me super dizzy. Either way after that we headed to the Kwik-E-Mart and I almost bought an employee shirt and nametag but it would have cost well over $70. 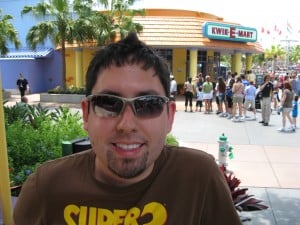 They didn\’t have any Squishees though.

By this time we were pretty tired and done with Universal. The next time I’d visit would only be for Harry Potter. Everything else I can take it or leave it. 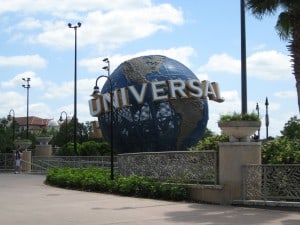 We caught a cab and headed to Downtown Disney to have supper and do some last minute shopping for our families and friends back home. I’m the worst at choosing what lines to pay at. The one I chose this woman was very specific on how she wanted ALL 20+ of her little figurines packed. The poor girl at the register had to wrap each one. These weren’t even glass figures they were plastic and rather tiny. Then the woman wanted individual bags for them. After standing in line for 10mins and watching it NOT move at all I headed over to another register in another part of the store. I was in and out in 2 mins. I walked by the register I was at before and the woman was STILL there. Glad I moved.

After spending a ton of money on my family and friends I bought myself some more Disney pins to feed my newly found addition and bought an ice cube tray that shapes the cubes as Mickey ears. That was my best purchase! Now whenever I’m having a drink I can remember the magic!

It was still relatively early so we walked around Pop Century and took some photos of the resort. It was nice to be able to walk around and see everything. 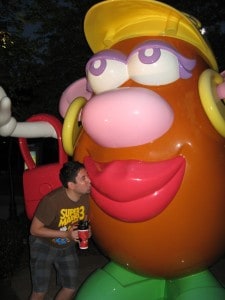 I\’ve always had a thing for huge potatoes. 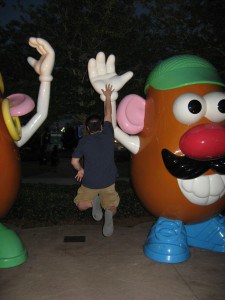 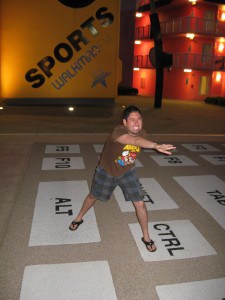 The DEL button is my arch nemesis!

That was our exciting day at Universal Studios and ending it at Downtown Disney. Tomorrow would be our last day in Disney World. We attempt to visit each park in one day and do our favorite rides before saying goodbye to Mickey.