May 6th, 2010 – Another early morning for us, but this time we got a wake up call from Mickey and his rude friend Stitch. Had to make sure we were up and ready to make it to the Magic Kingdom for rope drop at 8am. Picked up some breakfast in the food court at our resort and we were off!

Thankfully this time our bus driver was able to get to the right park and in a timely manner. The bus was packed, but we made it there just before rope drop! This was the only rope drop we actually made throughout the entire trip. I’d have to say this one was very impressive! After watching the opening that was the first time I fully realized that I’m in Walt Disney World, it was a great feeling. Instead of using a wall of text to explain it to you, I’ll just show you a video! Everyone loves a video.

After watching Mickey and his friends dance around, the park was officially opened for the day! We were using the same tactic as the day before. Get all the major attractions out of the way with minimal wait times and get fast passes for the attractions we want to do again. First up on the list was Space Mountain in Tomorrowland! I wasn’t expecting the ride to be completely in the dark, but it was. I was told that they recently refurbished the attraction and added a video game for people to play while they are waiting in line. Seeing as there was next to no line we didn’t get a chance to play it. Looked like a game where you collected trash and tried to get as much as you can before the timer went out. We enjoyed the ride so much that we walked right back onto it, with no wait. After the second ride we grabbed a fast pass since they were already handing them out for 11am. 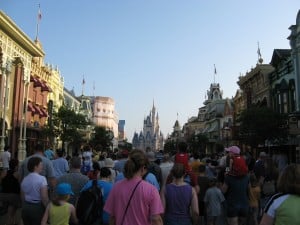 Mainstreet USA at 8am! 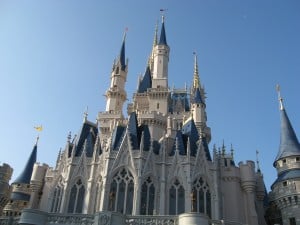 Cinderella's Castle on a beautiful morning!

After going through space a couple of times we checked out the rest of Tomorrowland. Walking through all the shops and also checked out Stitch’s Great Escape. We walked down to Fantasyland to check out the attractions there. Many of them were for smaller children, so we skipped over them. I’m also not a big fan of rides that spin in fast small circles, which is what the Tea Cups were.

Being my first time to the park I wasn’t aware that Adventureland and Frontierland weren’t open until 9am. A Cast Member kindly told us that after we tried to walk through the castle and we were stopped because they were filming a TV show. So we headed back through Fantasyland then to Tomorrowland and went to see what they were filming. We figured it was just a commercial for the resort since what they were recording looked very generic and no Zac Efron was to be seen, but I could be wrong.

By the time we did all that it was now 9am and the rest of the park was opened! Headed over to Frontierland and checked out the Pirates of the Caribbean attraction. The theming of the ride was outstanding! It really felt like you were there. The ride was enjoyable and if you liked the movies I’d recommend going here. After we wanted to check out Splash Mountain, but low and behold they were filming yet again! We ended up going to Big Thunder Mountain Railroad while we waited for Splash Mountain to reopen. When we were done with Big Thunder Mountain Railroad we headed to Splash Mountain and it was reopened! They were still doing some filming but it was of people going down the final drop on the attraction. When we finally got to the final drop I made sure to wave to the cameras! I also got soaking wet, which was to be expected. Next we went to the house of the most famous mouse in the world….

Two words for you: Mickey’s House! 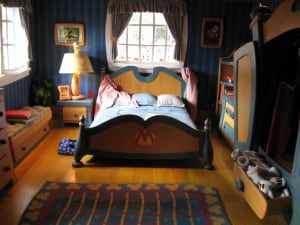 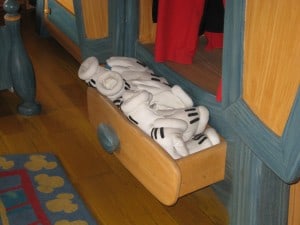 Drawer full of his gloves! 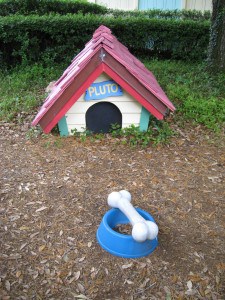 This is where Pluto lives but he's out working right now.

Apparently I have very good tastes in t-shirts because throughout the day I got about 5 questions/compliments about the t-shirt I was wearing. It had a picture of Gizmo from the Gremlin’s movies. I had Cast Members and random people give me thumbs up and high fives because of my shirt. Or maybe everyone was just being nice, who knows. Either way I got a lot of attention that’s for sure. 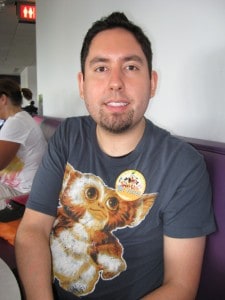 After our adventure on Splash Mountain we headed to the Haunted Mansion. I really love how the Cast Members really get into their roles. The butler for this attraction kept telling us to “move your bodies alllll the way to the end. If you can fit a body in between yourself and the person in front of you, you can put your body there!”. It was another attraction where you sit in a cart and it just pulls you through and shows you some neat things. The one part that was my favorite is how they made the ghosts look like they were actually there. It’s a bit creepy that they are able to do that but oh so cool. I was saddened that there wasn’t a huge gift shop after the attraction but there was a small cart that had plenty of items for me to spend my money on. I bought a nice Haunted Mansion keychain and a Baby Jack plush (from The Nightmare Before Christmas). The Cast Member working there was asking me if I was going to move into the Mansion (be the 1000th ghost) and talking to me about the Bride. I found it cool how in character they get!

Disney World is not complete until you do It’s A Small World, which is what we did. Yes it was cute but I can see how it could get annoying quickly. Thankfully it’s not overly long. But now I can say that I have done it, and it was enjoyable for what it was. 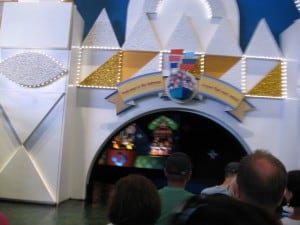 It's A Small World

We headed back to Tomorrowland and got to see the talking trash can. It’s exactly what you are thinking. It’s a trash can that rolls around and talks to guests. It doesn’t have preset phrases there is someone actually doing the voice. It was absolutely hilarious. It was talking to this girl, who had to be about 12 years old, and she was holding her little brother’s hand. The trash can asked her “is this your boyfriend?” she responds with “No, this is my brother”. Then the trash can asks “Now why would you be dating your brother!?”. Oh man I could not stop laughing. Once we were finished with the trash can we checked out the Buzz Lightyear attraction and went to Space Mountain once more before heading back to the hotel for an afternoon nap. 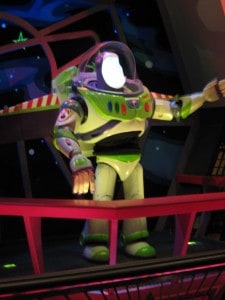 Buzz Lightyear to the rescue!

Before heading back to our Resort the skies opened up and poured. We thought we could wait it out but after waiting half an hour we decided to just suffer through the rain to walk to our bus stop. Which is exactly what we did and were soaking wet. But we were already soaked once that day so what’s once more? 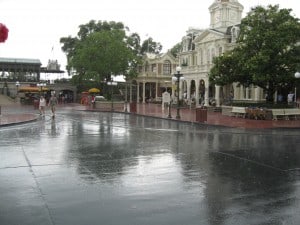 It rained Olivers and Plutos.

After a good hour nap at the resort we decided we wanted to head to Epcot just to walk through it once and eat at one of the pavilions. We decided on eating at the Japanese Pavilion and I got to have Japanese Curry! I haven’t had proper curry since I lived in Japan back in 2003 and it was absolutely delicious! Now since we were going to come back to Epcot we didn’t do any attractions and just walked through the pavilions. Once that was done we headed back to the Magic Kingdom to catch Spectro Magic and Wishes! 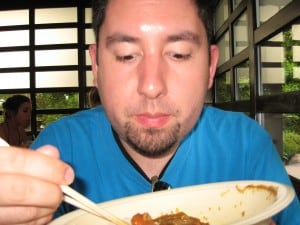 If only I could marry food...

Found ourselves a nice spot right at the end of Mainstreet USA near the Castle. Spector Magic was first and it was very cute and very bright! All the characters were wearing lights on them and there were no other lights on in the park. It’s something I highly recommend if are at the Magic Kingdom on the right night! We got a little bit of video so here it is! It’s a playlist so the next video will play.

Once that was done there wasn’t much time until Wishes start so we just stayed where we were since we had a very good view of Cinderella’s Castle. The fireworks were done to music and it was one of the best fireworks displays I’ve seen (the fireworks show done back home are very impressive too). The music fit the show perfectly and I over head a little girl say to her mother “Look mom! Magic IS REAL!”. That was by far the cutest thing I’ve heard any child say. Again another playlist and all the videos will play in order.

What an amazing day! We didn’t get back to our Resort until probably 12:30am and we were up since 6am that morning. It was worth the sore feet and soaked clothing. My favorite part of the day was Splash Mountain, The Haunted Mansion, Spectro Magic, and Wishes. So much to see and do!! The next day is a full day at Epcot! Lots of adventures there! Check back for my blog post on that day!

I leave you with our little friend that lives near our resort hotel room. His name is Jacob the Rabbit. Isn’t he the cutest? 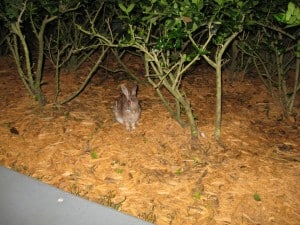