May 7th 2010 – Day 3 starts off early just like the first two days. We get a wake up call from Mickey again and Stitch must have slept in because he didn’t rudely interrupt Mickey this time. Today is Epcot! 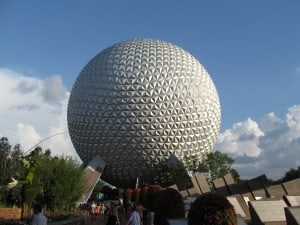 We’ve adopted our tactic for doing the major attractions early to avoid long lines and missed fast passes. Please remember that it may seem we did all these rides fairly quickly and had a lot of fast passes, these are over the course of 4-5 hours so it was much longer then it sounds here. First up we headed to The Land and hoped aboard Soarin’. I tried thinking of a way to explain the ride but I think the Disney website does it much better. Here it is in the lovely quotes:

“Soarin’ is a serene, multisensory attraction that simulates a peaceful hang-gliding flight over California. Experience the feeling of free flight from 40 feet in the air while surrounded by scenic panoramas including the Golden Gate Bridge, Malibu and LA.”

You are hung in front of a HUGE screen and it feels like you are really Soarin (ha) through these vast landscapes. We had great timing when we got there because we had a 10 minute wait time. Once we came out there was over 30mins wait time. Decided to grab some fast passes to come back later in the day. 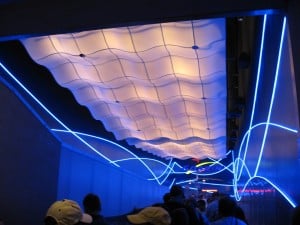 Ceiling in the line to Soarin' 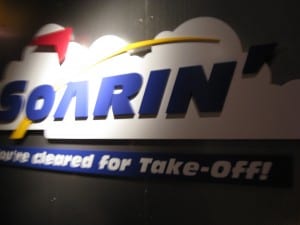 Next we headed over to visit my very good friend Nemo, he told us that he had a show we had to check out. I couldn’t disappoint my fishy friend so we headed on over to The Seas with Nemo & Friends. Again this was another very well themed ride. The line up to the ride was very dark to represent being under water. The ride was extremely cute as it took you through the story of my good friend Nemo. I won’t ruin the surprises in there for you.

Since I paid a visit to my friend Nemo I had to head over and visit my other good friend Ellen. She has her own ride you know and it’s called Ellen’s Energy Adventure. I’m not the best at explaining things clearly so here is a quote from the Disney website explaining the attraction:

“Starring comedian Ellen DeGeneres, this multimedia attraction takes you on a trip from the eras of the Big Bang and dinosaurs to the present, exploring what powers the universe and our daily lives. Venture to the future to see how we’ll eventually live!”

I won’t be too harsh on Ellen but the ride wasn’t the best thing since Splash Mountain or Expedition Everest. If there’s something you can skip I’d say you won’t miss much. Her jokes are funny as always but that’s about it.

The park has various Disney Characters that are made out of flowers and other plants, we tried to get photos of them all. 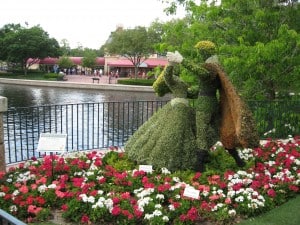 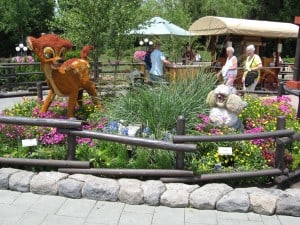 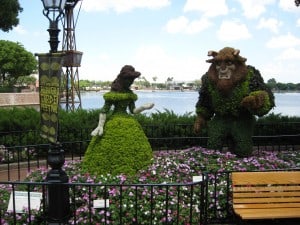 Next we grabbed some fast passes for Mission: SPACE since the line up was already about a 30minute wait (our plan isn’t fool proof, too many variables to take into account). While we waited we quickly headed over to Test Track and used some fast passes we grabbed earlier in the day. You are pretty much a crash test dummy and you are put into a car and put through various tests. The last test you go up to 60 miles per hour and circle the building. That was a lot of fun minus the jerk that decided that putting their WHITE gum on the seat before me. I sat in it without noticing and had a white blotch of gum on my butt for the rest of the day.

When our fast past was up for Mission: SPACE we only did the less intense since the wait was 10mins vs the 30min wait for the more intense (this was the fast pass line). If you are someone that hates small tight spaces then you can avoid this ride, and they tell you that over and over and over again before the ride begins. It makes you feel like you are taking off in a space shuttle and head to Mars and do some funky flying and what not. There are only four people to a shuttle and each person is given a role and at a specific time you have to press one of your two buttons to make something happen. Also if you get motion sick rather easily (like I do) then you will get a bit dizzy after this one. I’m willing to try the more intense ride next time.

Here are some more of the Disney Characters that we took photos of! Real ones and ones made out of flowers! 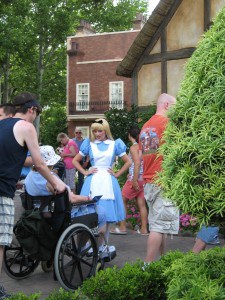 Alice from Alice in Wonderland. She has an English accent too! 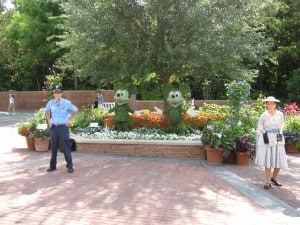 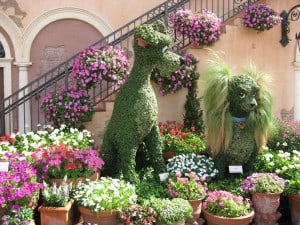 Lady and the Tramp

After getting the major attractions out of the way we started walking through all the Pavilions. First up was the Mexico Pavilion where the shops, restaurant, and attraction were inside a Aztec Pyramid. It was something to see. We checked out the Gran Fiesta Tour Starring the Three Caballeros. Which I’m sure most of you remember. It was a cute ride and relaxing.

In the Norway Pavilion they had another boat ride that went through some of Norway’s History, it was called Maelstrom. Just your typical boat ride with a movie to watch once you hit the end.

The other Pavilions we checked out were American Adventure, Canada, China, France, Germany, Italy, Japan, United Kingdom, and Morocco. They all had nice gift shops with unique items that are from that country and either a quick service restaurant or a sit down or both! In the Canada Pavilion you could buy Smarties. I forgot that those are a Canadian thing, and no I did not buy any! 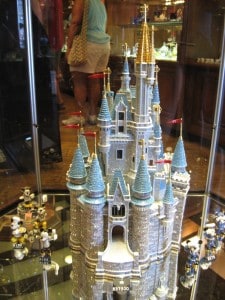 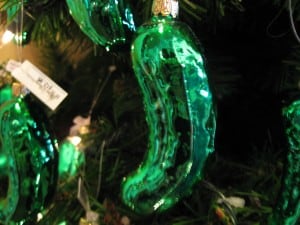 Pickle Ornament in the German Pavilion

At the China pavilion we caught an acrobat show where there were girls spinning pieces of circular cloth on their feet and arms, boys using cans to do acrobatics, and another group of girls using hoola hoops. They were a very talented group of kids.

We had lunch at the Rose & Pub in the United Kingdom Pavilion, it was WELL worth the wait. The girl that served us was from Jersey which is an island off the UK. She was incredibly friendly, funny, and polite. I had roast beef, potatoes, gravy, greens, and Yorkshire pudding! It was absolutely delicious. While were eating we saw two separate women get extremely upset with the servers. One lady got mad because she had to wait to get a table and pointed out there were 3 free tables just sitting there outside. Another woman literally freaked out when they were seated outside and wanted to be inside, and the lovely girl tried to explain nicely that the inside was full and if they wanted to sit inside they would have to wait longer. Then the woman just lost it after hearing the word “wait”. There’s no pleasing some people is there.

This time we didn’t head back to the resort to have a nap. We felt pretty good and weren’t overly tired so we stuck it out. We went and checked out Spaceship Earth which is right inside the Epcot ball. IT was a 16 minute ride that takes you through human history and into the future. It was enjoyable.

A weird thing that we saw was a sky writer that wrote “U + GOD = :)” in the sky. Apparently this guy does it all the time. The guy must have a lot of money and nothing better to do with his time. The message doesn’t bother me at all.

Another thing we checked out was the Coke store that allowed you to sample (for free) soft drinks from around the world. These are the same ones you can try out in Las Vegas. It was enjoyable watching unknowing people try the Beverley drink from Italy!

Then we went and checked out the China Circle Vision movie which was really neat! The movie was projected all around the room so you can see everything in a 360 view. It went through China’s landmarks and other important parts of the beautiful country. For supper we decided that we wanted to have Chinese, so that’s what we had. 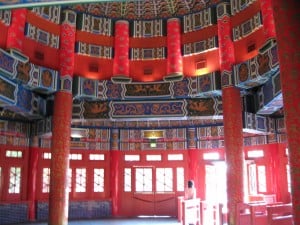 Inside the Chinese Pavilion

After we just walked around taking more photos of all the lovely Disney Characters that were made of flowers. Then we grabbed a spot near the Italy pavilion for the Illuminations show. The area we were in got really crowded quickly and this guy that was standing in this corner left and the crowd just naturally filled in the spot to make room for others. I happened to fill that empty spot and the guy comes back a good 20minutes later and rudely says to me “Do you mind? I didn’t leave.” I found that to be a bit rude but whatever I could still see the show perfectly.

The show was great and what made it even better is we had this 5 year old boy be the commentary for the entire show. Guess what? We have it all on video too! Listen carefully to the background and you can hear him. The video is in two parts!

We left Epcot at around 10:00pm and we were more then done! It was a really long day but very enjoyable. Sadly Jacob wasn’t there to greet us from our adventure. But at least our decorated window was welcoming! 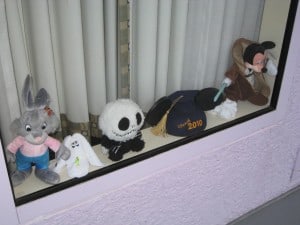 The next day is Hollywood Studios so check back for that! Hope you all are enjoying my trip report!