May 8th – Once again another early morning, I’m starting to get used to this! Today is Hollywood Studios and we were making it there for Early Magic Hours! 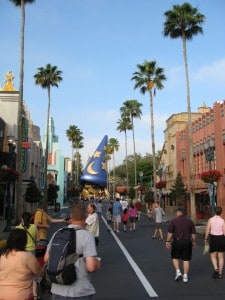 To add some more excitement to my Trip Report I thought I could include some music for you to listen to while you are reading! Make sure to turn it off when you watch the videos!

When we arrived the first thing that we did was head on over to the Aerosmith’s Rockin’ Roller Coaster which we just walked onto. Since the gum on the seat in Epcot I’m always looking at my seat before sitting down. The most intense part of the ride was at the very beginning when it goes from 0-60 in only a couple of seconds. They are mean to you on this ride too, just as you hit 60mph they take a photo of you. Lets just say that my photo looked ridiculous. It wasn’t worth the $18 in my opinion ha! Overall it was a fun ride and we grabbed a fast pass to come back later in the day.

Being Early Magic Hours not all the attractions were open so we were very limited on what we could do. Since I’m a Star Wars fan it was a given to go check out the Star Wars Tours! The ride is very dated but they are re-imaging the attraction later this year. I was happy to be able to ride the classic ride before it was no more. The amount of Star Wars items to buy is crazy, I could have easily spent my life savings in that store. I did pick up a nice Mickey Mouse Jedi plush which is the cutest! 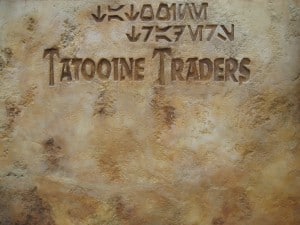 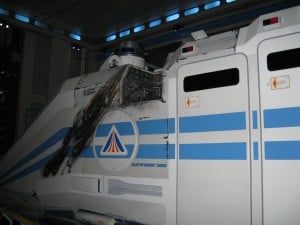 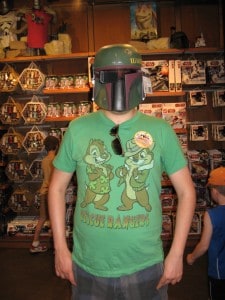 By this time the Hollywood Backlot was opened up. They take you through special effects of movies such as war scene involving boats. After that you are taken onto a vehicle that takes you through the back lot and look at different movie props. One that I remember is an object from Star Wars. It was rather enjoyable and relaxing. After the attraction there is a room that shows you various costumes from different movies such as Star Wars (are you surprised?). 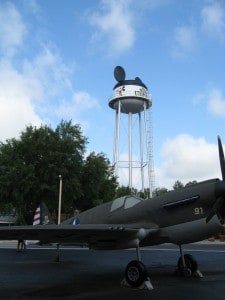 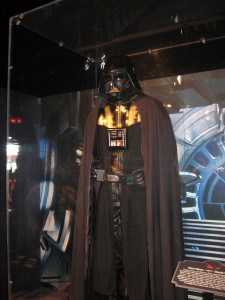 Here’s a video from the Hollywood Backlot tour. It’s pretty neat how they are able to do this kinda stuff.

By this time we decided that we wanted to grab a fast pass for Toy Story since the wait time was already up to 30 minutes and the fast passes were well into the late afternoon. A Cast Member told us that these fast passes are considered gold since they go so quickly.

Beauty and the Beast is one of my favorite Disney cartoons and one of the first that I actually remember watching when I was a child. So it holds a special place in my heart! Naturally we had to check out the live action show! We got there nice and early and got some pretty decent seats! They take you through the story in about a 20 minute show. The performances were outstanding and choreographing was top notch. It’s the quality you’d expect from Disney. My favorite part was Be Our Guest, and look here! I have video from that! 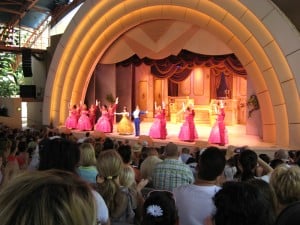 Beauty and the Beast Live

After visiting my friend Belle we headed on over to visit my friend Ariel in her live performance show. Again another enjoyable show! There were a lot more puppets in compared to Beauty and the Beast.

Once we were done visiting the castle and going under the sea we headed on over to our Fast Pass for Toy Story. We lucked out on this one. The stand-by line was 90 minutes and the Fast Pass line was lined up pretty deep. Everyone ahead of us was in a party of 3 or more. There was only two of us so they pulled us up to the front of the line and sat us in the handicap seat, which is in the very front. The ride is exactly the same was Buzz Lightyear in the Magic Kingdom, where we have to shoot targets. This time the targets were on screens and they moved! I still kicked my friend’s butt in overall point. It was a quicky and fun ride. I know why the Fast Passes went so quickly for this one. 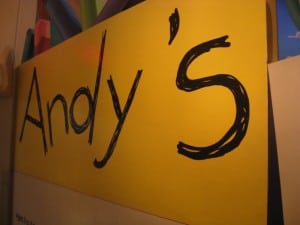 We were shrunk into toys! Disney can do anything .... 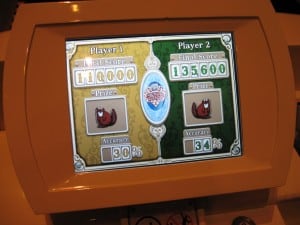 My score is on the right. I won and don't let him tell you otherwise. 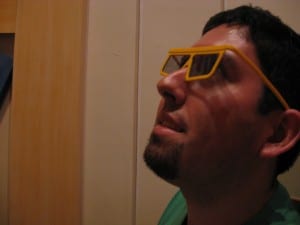 You had to wear glasses for this ride!

We had a late lunch reservation for the Prime Time Cafe at 2:45pm. It was themed as a 1950s home kitchen which was VERY neat! A majority of the servers were older women which was extremely cute. One of them kept calling me “Skippy” every time she walked by our table and my friend was called “Scooter”. When we were first seated our server greeted us and handed us the menu. He looked at me and told me to read the top corner of the menu. I go a head and read it “Keep elbows off the table”. It took me a second to figure out that I had my elbows on the table! Another guy sitting adjacent to our table did not finish his vegetables and his server (who was a 50+ year old woman) gave him hell and then took his fork, loaded it up with vegetables, and made an airplane sound then fed it to him! His whole family was laughing at him the entire time. I also got to have my VANILLA COKE! Ohh and it was delicious! The overall experience was great and I would recommend it to anyone that wants to have a meal. 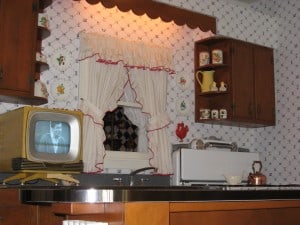 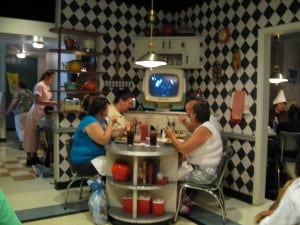 Example on how to use the 1950s tables. Demonstrated by this lovely family. Thank You!

I stopped watching American Idol years ago but we went and checked out The American Idol experience. They make it feel like you are really watching the show live. There were three contestants. The one that won the round was this young 19 year old girl from London. She wasn’t half bad, but was much better than the first two performers. 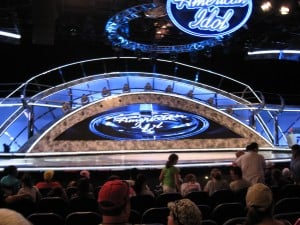 After we did that we caught the tail end of the parade going through the park. I was hoping to be able to see the whole thing but oh well. Can’t get everything! But we did catch the Jedi Academy show. Children are chosen from the audience to be traded as Padawans. Half way through the show Darth Vader and Darth Maul show up to crash the party. Then the kids take turns fighting them. It was extremely cute and geeky at the same time. I wish we were able to make the Star Wars Weekends. Ah well, maybe next year. 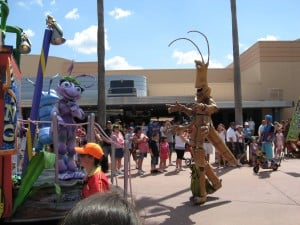 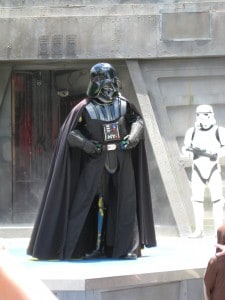 Darh Vader came to take the young Padawans to the Dark Side. 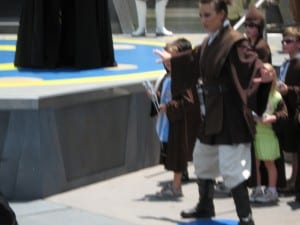 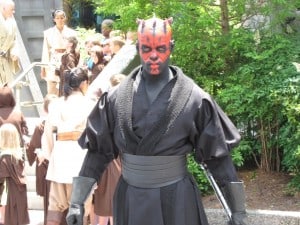 Darth Maul came to crash the party too! 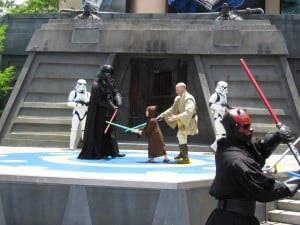 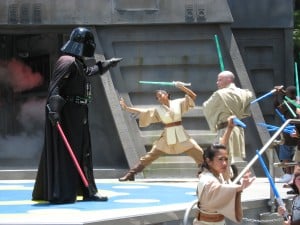 That was our day in Hollywood Studios. We did not do the Tower of Terror again since neither of us were feeling up for it. We decided that we wanted to head to Downtown Disney and check out Disney Quest for the evening since we had the “Water Parks and More” option on our passes.

Oh before I forget, I got to see the POWER RANGERS! I got a little too excited and took some photos of them. Too bad they weren’t the original ones. These were the Power Rangers in Space while traveling back in time to the dinosaurs and using Turbo powers while using the powers of the galaxy. 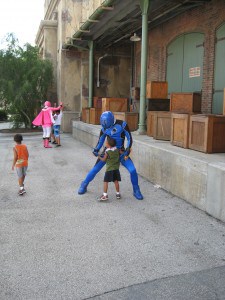 You can never go wrong with the Blue Ranger! 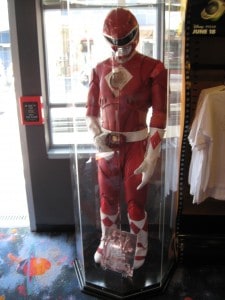 The actual Red Ranger suit from Power Rangers the movie! They had the Yellow Ranger too! So cool!

Once we got to Downtown Disney we walked all the way to Disney Quest. You had to take an elevator to get into the actual arcade. As to be expected from Disney even the elevator ride was made enjoyable. A mirror on the one side of the elevator displayed Genie from Aladdin and he said a few jokes and then shot us up like a rocket and the elevator moved as such.

There were multiple levels to this arcade. They had every arcade game you could think of there. They did have a DDR Machine that I’ve always wanted to try. But there was this girl that was on the machine the entire time we were there. I even stood by the machine waiting for my turn. She would just keep playing. I left for a bit, then came back and she started playing again! She gave me this dirty look so I let the brat have her way. I could live without playing it. The cafe there was themed as Alice in Wonderland and you sat in oversized chairs. It was pretty cute. Overall Disney Quest was alright, if you miss it when you go, you aren’t missing too much. If you love arcade games then this place is heaven for you! They even have classic arcade games such as Donkey Kong.

That was our 4th day in Walt Disney World! Like every day we’ve had so far it was enjoyable and memorable. Day 5 we take a short break from the parks and head on over to Typhoon Lagoon. The break is short as we head back to the Magic Kingdom for Extra Magic Hours!