May 9th – Today we wanted to take it easy so we decided to go to the Typhoon Lagoon water park for the day. Got to sleep in today too since the park did not open later in the morning. First thing we did was cover ourselves from head to toe in sunscreen. It was a nice clear day to go swimming!

The first thing we did was head into the Lazy River to look at all the different parts of the water park. It was a nice change of pace compared to the last four days we just had. After that we got out at the other end of the park and did a couple of the water slides. They were nothing too special, something you’d see at any other water park. Innertubes and a 3 story drop water slide.

Once we had those out of our system we went to the wave pool and stayed in there for a while. The 6 foot waves were tons of fun. I tried to swim to the deep end to hit the waves but inevitably I’d get water up my nose and I’d start choking, taking the fun out of it. Regardless we spent a lot of time in the wave.

Our favorite part of the park was Crushin N’ Gusher. It was a watercoster where you would sit in a 2 or 3 man tube and you would go through what felt like a rollercoaster. You would go down a drop and water would push you back up the hill. It was so much fun that we did it three times! Our first time through we had a photopass person take a photo of us when we hit the end as we were tipping over. She got a picture when my friend’s knee connected with the back of my head. It actually did hurt quite a bit!

We were only at the park until about 3pm since being in the sun that long took a lot out of us. Even the multiple re-applications of our sunscreen did not prevent our shoulders from becoming sunburned.

Tonight was Extended Magic Hours at the Magic Kingdom until 1am, that was our plan for the rest of the evening. We did a couple of the smaller rides that we didn’t do during the day because the lines were pretty long. Finally got to check out Snow White and Peter Pan which were both very cute and enjoyable. We also checked out Mickey’s PhillarMagic, which is a 3D show that takes you through various Disney Cartoons. 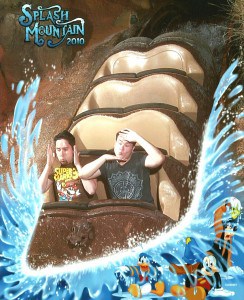 Posing on Splash Mountain. Who knows what we're doing?

We walked around the park a couple times and checked out a couple more attractions such as Pirates of the Caribbean. We left just before midnight since we were so exhausted and we had to get up for 6am tomorrow. On the bus back to our Resort we had three adults get into a fight about strollers and there was a lot of yelling and children crying. What a magical way to end the day. At least tomorrow we have Universal Studios to look forward to!