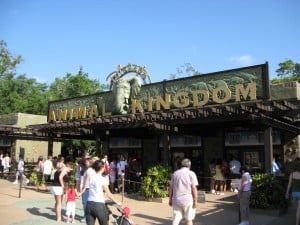 May 11th – Today was our last full day in Walt Disney World. We decided to do “The Best Of” for the day. Our first stop was Animal Kingdom and the first attraction we hit up was Expedition Everest! My favorite ride out of all the parks. We stopped in the line up area to take photos of all the well done props. Once we were done with that we headed over to Kali Rapids. Remember in Universal Studios how I said how much I loved karma? Seeing as John was bone dry the day before he got completely soaking wet and I was the one dry. He was the unlucky one when we went down the small waterfall and the water went over him. You can’t get much wetter than that. 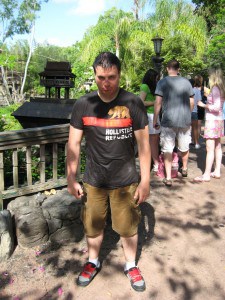 That's what you get for being dry in Universal Studios 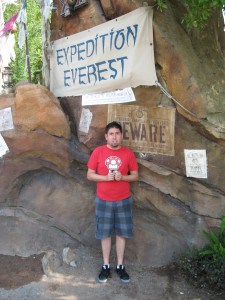 The Yeti scares me 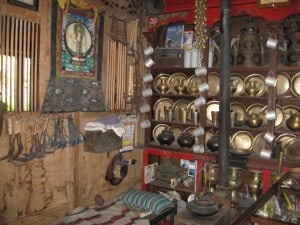 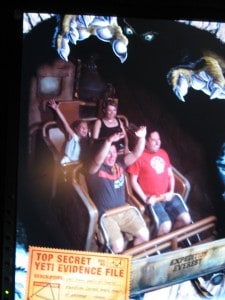 We were cheap and decided to take a photo of the screen instead of buying it.

Next up was the Dinosaur attraction which was just as fun as the first. My inner geek came out when we saw the this sign for a food stand. 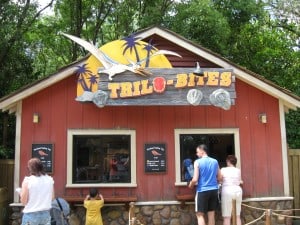 HAHAH I couldn't stop laughing. My Geology is coming back to haunt me.

We waited for the next showing of Finding Nemo The Musical. It was well worth the wait. I loved the movie and the musical was just as cute. They had fish come into the audience and everything. It’s quite something to check out. You have to do it when you head to Animal Kingdom. 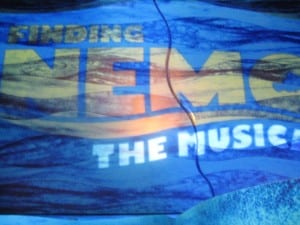 Waiting for Finding Nemo The Musical to start! 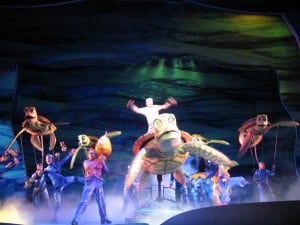 Such an amazing show! 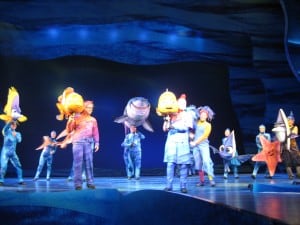 You HAVE to check this out when you go to Animal Kingdom.

After walking through the park one last time we headed on over to Epcot for lunch. We had lunch in The Land attempted to head on Soarin’ but the line up was up to over an hour and the fast passes were all gone. We got to do it twice the one day so we weren’t too crushed. To make up for it we went to see my good friend Nemo again in his little attraction. It was still cute and I still loved it. It was rather busy and I found out why … 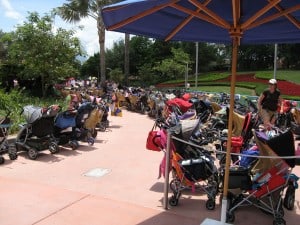 We never saw the Fairies last time so we walked through and took photos of them all. They were really well done and cute. After that we started heading to all the Pavilions one last time. The first was the Mexican Pavilion. We did the attraction again. Then headed over to Norway and did Maelstrom again but did not stick around for the movie. In the Italy Pavilion we were watching this clown do tricks and he was getting small children to throw balls into a hoop. He picked me to throw one of the balls into the hoop. He made it much harder for me by moving the hoop out of the way each time I tried to throw it in. I tried about six times before he walked up to and gave me a small ball the size of a grape fruit and I try again. I miss yet again and he points at the ball and this little boy that was in a stroller that threw the same sized ball into the hoop no problem and laughs at me. I finally get the ball in after the 10th try. I had the entire crowd laughing, it was pretty fun. 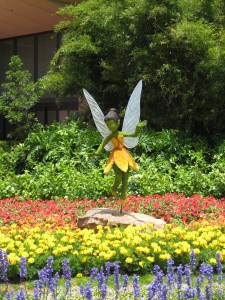 Theses were so cute! 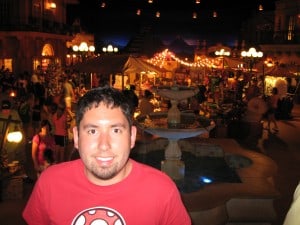 The Mexican Pavilion was so cool! I wanted to go to the Tequila bar. 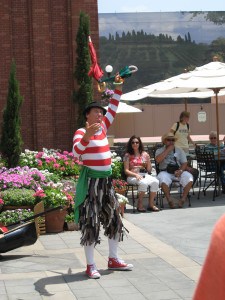 He made everyone laugh at me.

We walk though the rest of the Pavilions and walked through the shops one more time to see if there was anything we wanted to pick up. Our last stop was the Canadian Pavilion just to check it out. I found it amusing seeing Canadian candy in there. You’d think they would have it in the US. I wasn’t about to pay $4 for a box of smarties. We watched the Canadian Circle Vision movie hosted by Martin Short. They talked mostly about BC, Ontario, and P.E.I. The Prairies were shown once in a photo of a field and nothing about the Yukon, N.W.T, or Nunavut. It was still an enjoyable show though. I’m just being nit picky.

After that we headed down Boardwalk to check it out and it was nothing too special but was very quiet. There weren’t very many people in that area. We then caught a bus to the Contemporary Resort to take a look around and jump on the Monorail to the Magic Kingdom. Mind you the Contemporary and Magic Kingdom are literally beside each other but we wanted to take the monorail. 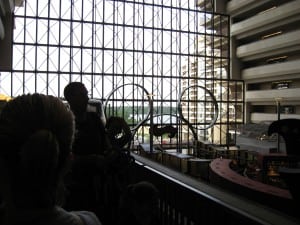 Inside the Contemporary Resort

Once hitting the Magic Kingdom we hopped on the Train that circles the entire park. It was nice and relaxing. Once we did the circuit we headed off to Tomorrowland and did Space Mountain one more time. We then took the Trolly that went around Tomorrowland. I had no idea it went behind some of the rides so you can see inside them. You get to see inside Space Mountain and can see the carts going around (barely it was so dark). Also got to see inside the Buzz Lightyear attraction too. We hit up a couple more of the attractions one last time before we got our spots for the Wishes fireworks. 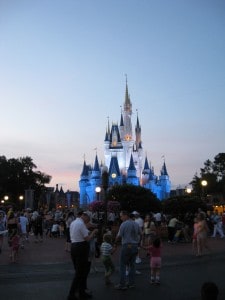 The perfect way to end a perfect magical vacation.

It was the perfect way to end the best vacation I have ever had! I had so much fun and I cannot wait to head back. It really is the most magical place on earth. I used to not get too excited about Disney but now that has completely changed. I will be returning very soon! So soon in fact that I will be heading to Tokyo Disneyland in June! I’m going to be in Japan for a month and I will be making a few trips to Disneyland. I hope you all enjoyed my long trip report and I’m looking forward to update it on my trip to Tokyo!