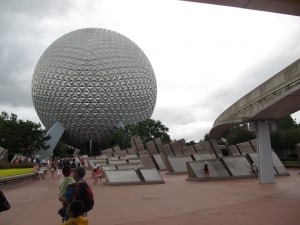 This day started off early since we wanted to head to EPCOT for Early Magic Hours! Everyone was still getting used to waking up early, so we arrived about 45mins after the park opened. The very first thing I said we had to do was grab FastPasses for Soarin’. Everyone that has been knows that this attraction gets pretty busy quickly. Once the FastPasses were in hand my middle brother really wanted to see Captain EO, he really enjoys anything retro and this attraction screams it. Everyone gladly agreed and off we went to meet Captain EO! I’m not sure if it’s just me or that the 3D in this has “ghosting” which really messes with my eyes. If this happens to you, let me know so I know I’m not the only one! 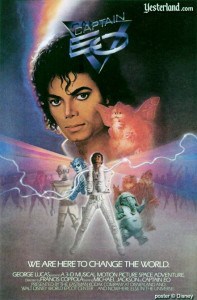 My brother really enjoyed Captain EO and said he was extremely happy he got to see it. He wasn’t even born when it was first released (September 12th, 1986) and I was only a year old! You have to admit, the King of Pop could dance like no other.

Once we were done being transported to 1986 it started to rain pretty hard so we ran to The Land Pavilion to escape the down pour. Decided to ride Living with the Land to take in the some times odd looking fruit and vegetables. It was still raining pretty hard outside so we did a little bit of Pin Trading and got some pressed pennies! 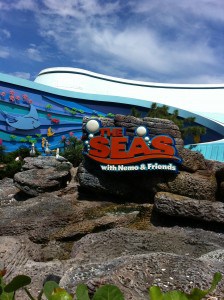 The Seas with Nemo & Friends

The rain finally let up and we were able to go and visit our good friend Nemo at The Seas with Nemo & Friends. My family has never been to an aquarium before, so we spent a little bit of time looking at the various aqua life after visiting our friend! 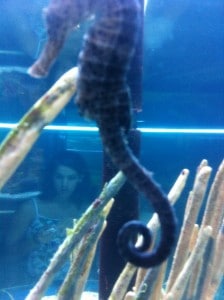 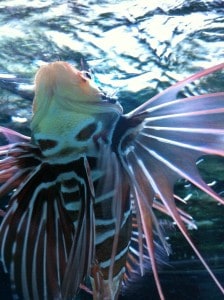 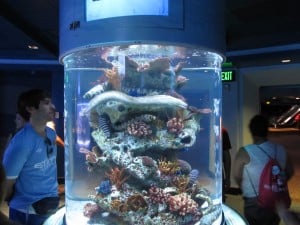 By this time our FastPasses were ready for Soarin’. My mom was a bit tired so I said I would run over to Test Track and grab us some FastPasses before we went on Soarin’. The wait time for Soarin’ by this point was 50mins and we were glad to have grabbed our FastPasses earlier in the morning. My mom and youngest brother were a bit leery of this attraction since they didn’t really understand what it did. They don’t care for heights that much, but they really loved it! I knew they would.

Thankfully we didn’t have to wait very long for our FastPasses for Test Track! Everyone loved the attraction, even my mother! She did scream the entire time we went around the big track at the end though. We all had a good laugh at the various colorful words coming out of her mouth.

After that we checked out the various stores around Future World before heading to the World Showcase! We always start on the left side (Mexico) and work our way around. First up was the Mexico Pavilion where we rode Gran Fiesta Tour Starring the Three Caballeros. We then made our way through all the Pavilions and had lunch in America. Went through all the various shops and my brothers picked out a pair of Mickey Ears they wanted in the Canada Pavilion! 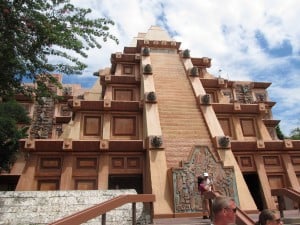 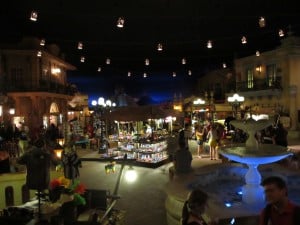 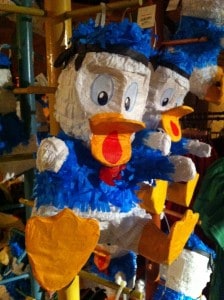 Donald Pinta in the Mexico Pavilion 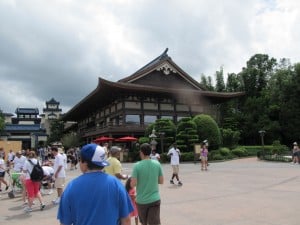 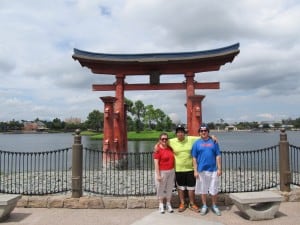 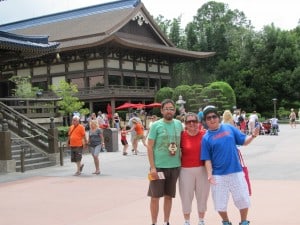 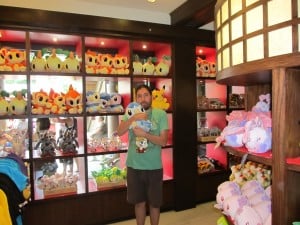 We had a reservation in Hollywood Studios at the Sci-Fi Drive-in Theater for 4:30pm. That was the only time available for anytime that week. Lesson here is don’t wait to book your ADRs! This is our first Table Service restaurant together as a family! The set up was very retro and dark but awesome. The dining room was a huge dark room made to look like an old Drive-in Theater with a huge screen at the one end showing old black and white movies and commercials. The tables were all 1950s cars that all faced the screen. 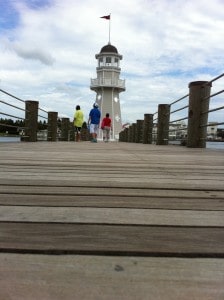 Taking the boat to Hollywood Studios 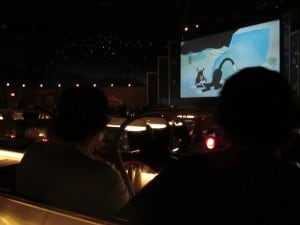 Enjoy movies while having dinner 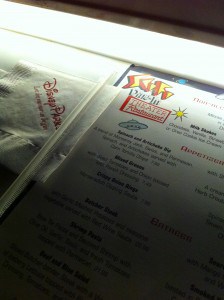 We used to have Vanilla Coke in Canada but for whatever reason it was taken away, and it’s my absolute favorite beverage in the world. They had it here and there was no way I was going to let this pass me by! For dessert my brother and I shared one of their famous Sundaes and it was the perfect way to end supper! The food was good and I would recommend it for anyone that loves Drive-ins and 1950s vehicles. 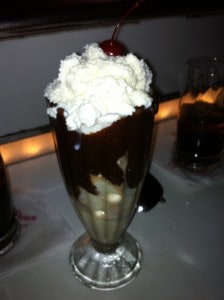 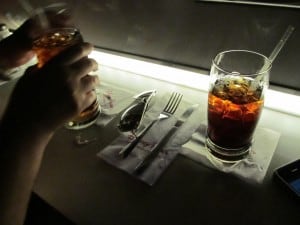 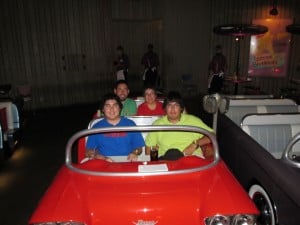 Having dinner in our car! 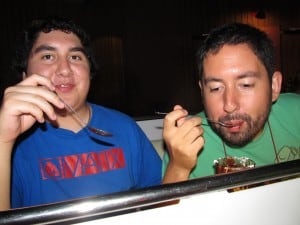 Now that we had full stomachs it was time for attractions! I thought it was a smart idea. But to allow our food to settle my youngest brother and I grabbed FastPasses for Rock ‘n’ Roller Coaster Starring Aerosmith. Only the two of us were going to ride but we grabbed four FastPasses so we could go on twice! Then it was all the way back to Star Tours to get chased by Darth Vader. I’ve had bad luck with getting Tatooine each and every time. This time my bad luck ended and FINALLY got to visit Kashyyyk. That was the only planet I haven’t visited yet. Both my brothers came on with me and really enjoyed it and thought the 3D was really done well. 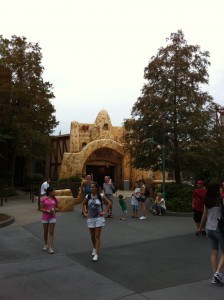 Still full from supper we weren’t quite ready to tackle Rock ‘n’ Roller Coaster we slowly went through Streets of America and checked out the various shops. We also stopped at Pizza Planet for some good ol’ arcade game action! Brothers played some Basketball and we got our photo taken! 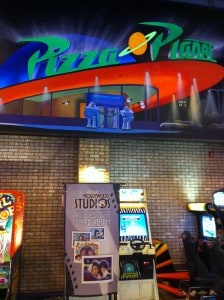 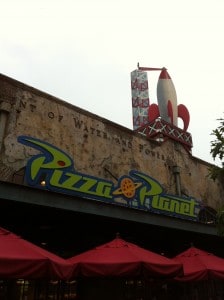 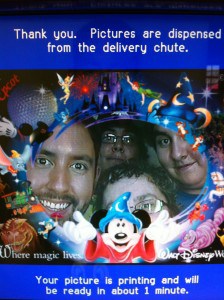 We also took a very quick trip to San Fransisco! 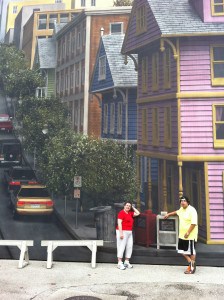 Look at that hill!

Now that our stomachs were close to being empty again my youngest brother and I went to Rock ‘n’ Rollercoaster while my mom and other brother found some nice shade while they waited. Once we were done we thought it would be a great idea to head to the Twilight Zone Tower of Terror, since it only had a 10min wait! We quickly ran to Rock ‘n’ Rollercoaster again then Tower of Terror right after! Yes we are insane but why not when there are very short wait times. Once my brother and I were done riding four rides we found my mom and brother and headed down to Fantasmic! to wait for the show. 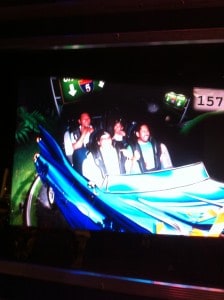 Are you ready to ROCK!?

We were in the Jafar section and thankfully no one extremely tall was sitting in front of us. Like clock work we had the wave start within the crowd. At one point the audience was able to get it from one end to the other. Most of the time it just died in the middle. My brothers got a kick out of this and got a couple of waves going themselves. 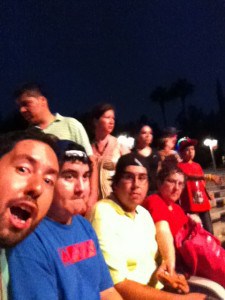 Shhh the show is about to start ….

The show finished and most people we walking at the top to all get out the same exit. We instead went right down to the water and walked all the way to the other end and then walked up. We bypassed pretty much everyone and got to the buses rather quick before they were completely insane.

While waiting for the bus we experienced our first witness of a family having a mini breakdown. The father was livid about something or other and was yelling at the top of his lungs to his wife. Everyone in line heard this and they continued to fight even on the bus with their crying children. Made for an uncomfortable bus ride home.

Despite the uncomfortable ride home we had a magical day and everyone really enjoyed themselves. We were all extremely tired and fell asleep rather quickly as soon as we got back to the room. The next day we are headed to Disney’s Animal Kingdom and Downtown Disney! I hope you enjoyed this installment of our trip report! Come back soon for more!